For this quote, I will be focusing on the keywords of beauty and flower

for the first four designs, I literally tried to combine a flower and a female together. and it didn’t work well. firstly the contrast is too high. Secondly, there is absolutely no context of Mulan here. Third, the visual language is wrong like the previous few draft. Fourth I just didn’t like it. moving on.

I tried to make a collage of flowers and the warrior equipment and soldiers in these two designs. However, it did not work out very well as the elements seem very individual and not well gelled together.

Using the previous idea as a stepping stone, I tried to incorporate the elements together to form a flower shape. But meh I didn’t like it at all.

For this design, I incorporated a lotus for the flower. I chose the lotus as it is a symbol of purity. There is a Chinese saying that the lotus is a very pure flower, despite from growing in the muds. I thought that this flower reflected Mulan’s personality and this quote very well. As much as I love this design, there warrior silhouette that I added as a mask layer in photoshop isn’t showing very well. in addition, the design is too futuristic. I was also told to draw inspirations directly from the quotes keywords instead.

For this design, I was partially inspired by tarot cards and hence I gave it an elaborate framing. however, it worked for me as it took the attention away from my main subject.i decided to encapsulate the flower in a black circle to draw the focus onto the flower. However, I have neglected one of the major keywords: adversity.

incorporating the flower element above I decided to add and show the warrior side of her with a Samurai mask. But it is still too plain and I decided to open the design.

For these two designs, I tried to use diagonal composition where I placed her warrior side on the right and her feminine side on the left. As I couldn’t find a suitable Chinese battle helmet, I had to substitute it with a Japanese Samurai head mask. I used skulls to further accent her bad ass side. For Mulan’s feminine side, I used flowers. I decided to use halftone for the flowers to give it a softer feeling while I used threshold on the other side to give it more of a harsher and crude texture.

This quote is taken from a verse in reflection, where Mulan laments how she could be the perfect bride. For this quote, I would be focusing on the words mask and heart, while showing a dual image.

For this design, I used two gender fluid models. the one on the left is a female who models male clothes and the one on the left is a male who model female clothes. I decided to use a genderfluid model as they challenge and break gender norms today just like how Mulan did. I used a smoky effect to fade their faces off into the distance to show how they are lost like how Mulan was at this stage of her life.

Similarly, this design uses the same concept as the previous one, but this one there is an afterimage of a little girl in the smoke. it’s like his lingering thoughts of needing to conform to society views.

In this two designs, I thought I would create some sort of mask, by removing parts of their faces with flowers. I decided to use flowers as it embodies what Mulan tries to be but cannot achieve.

Similar to the previous few designs, I was told that it was too futuristic and does not contain the historical Chinese look that Mulan had. In addition, I had to incorporate more elements from the movie.

For these two design, i decided to draw my motif from a Chinese opera mask especially from the changing face performance. I like how the Chinese mask is very expressive with distinct emotions such as anger and happiness. I wanted to portray Mulan putting on many facades with the different masks.

For the next few designs, I wanted to emphasize how Mulan kept some parts of herself hidden. so I used a curtain to express that she has kept her true self (the warrior side) hidden from her family. I wanted to have a woman caged on the other side of her face. however, I had a very hard time finding images to suit the second half of the face. In the first one, I used a female bounded by the flower. I wanted to show that Mulan is actually being chained by the feminine ideals which are represented by the flowers. however, the image is too small and blurry to be seen properly. in the second one, i used a pair of hands. For this, while the image could be seen very clearly, I couldn’t fit the hands in properly. if I fit both hands it would be too small. if I enlarged it, only one hand can be seen and the message is hindered. so I decided to settle with the last image. it is a halftone image of a girl being locked in a cage. as the picture isn’t very clear I used the eraser tool to erase part of the face to make the bars come out. As all of the images I could find is problematic, I had to settle for the less evil so I picked the last design as my final.

The first 2 designs, I wanted to show how Mulan shatters through that stereotypical image of her in the movie. I placed a shattered glass panel in front of her image with the bullet hole right in front of her face in the first one and her heart in the second. In the first one, I wanted to how she shattered her image through physical appearance. In the second design, I wanted to show how her heart has won over as she decided to be a tomboy instead of the docile wife she is expected to be. I felt that the drama wasn’t enough in the first design and decided to add broken grass shards around her.

Similarly, i tried to express shattering the stereotype in another way. the model ic hose is a genderfluid model. he is biologically a male but his physical appearance is a female. I wanted to show how people are breaking the gender norms in today world just like how Mulan did. the geometric shapes are inspired by broken glass shards.

Similarly, this is another androgynous model. I wanted to express a difference in the outward portrayal of the image with the inner mental image of oneself.

For this design, I wanted to focus on revealing the actual person inside. Like the previous 2 designs, the female at the back is an androgynous model who has transitioned from a male to a female. so by placing the glass shard in front of him, i revealed his true gender: a male. However, the previous few designs did not meet the brief requirements of looking retro as it looked too modern and futuristic, In addition, i was told that t=it lack the ancient Chinese setting in my design.

Keeping Mi Mi comments in mind I tried to incorporate more retro and vintage olden chinses elements into my design. for the next few designs, I was inspired by tarot cards and wanted to add an ornate frame. I used the Yin and the Yang symbol to show how Mulan is both a warrior and a female at the same time.

for this design, I used a mirror to show both sides of Mulan: a female as well as a badass bitch. I used a white background for her feminine side and a black background for her warrior side. to further emphasize the warrior aspect, I gave her an Oni mask, to symbolize her bravery and strength.

Unfortunately, I don’t think I will be using this quote as it has the same meaning as my other quote by Mulan in the same song: “if I wear a mask I can fool the world,  but I can’t fool my heart” which I like a lot better.

For my first quote, I will be using Tim Burtons Adaptation of Alice in Wonderland – ” Sometimes I think of as much as six impossible things before breakfast.” this line appeared in the movie three times. the first time, Alice was having a nightmare, and her father calms her down with this line before tucking her back into bed. The second time, Alice said this to the Mad hatter to give him courage and encouragement. the third time Alice said this, she was about to kill the Jabberwocky. The six things that Alice counted before she killed the Jabberwocky is:
There’s a potion that can make you shrink.
And a cake that can make you grow.
Animals can talk.
Cats can disappear.
There is a place called Wonderland.
I can slay the Jabberwocky.

For my second quote, I will be using Disney animated adaptation of Alice in Wonderland – “I don’t know” Alice said. the cat replied:” then it doesn’t matter.” This was said by the Cheshire cat to Alice when she was lost in the forest and had no idea where to go.

For my third quote, I will be using Disney 1998 Mulan – ” when will my reflection who I am inside.” This famous line was sung by Mulan when she lamented how she was very different from the ideal feminine stereotype in China.

For my fourth quote, I will be still using Mulan – “if I wear a mask, I can fool the world, but I can’t fool my heart.” Similarly, this was taken from a verse in the song reflection sung by Mulan.

For my fifth quote, I will be using Mulan – ” the Flower that blooms from adversity is the rarest and beautiful of all” This was said by the emperor in Mulan when Mulan revealed that she was a female and disgraced the country. I really love the movie Mulan as it is very similar to me: neither a feminine girl nor a 100% tomboy. I also love how they portrayed the female power in this movie despite it being created in 1998.

The first artist that I referenced is Martin O’Neill a graphic illustrator based in the U.K.. I love how he tasteful cut up the face and join them back through implied lines created by the flowers. 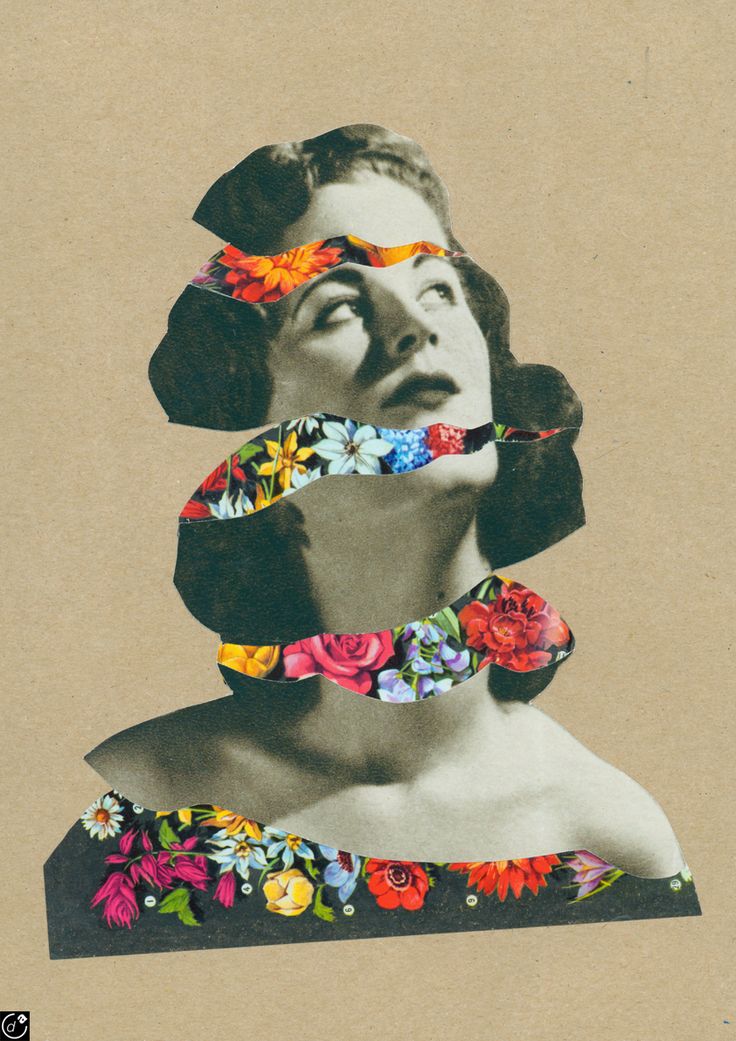 The Second artist I’m referencing is Rohan Daniel. I love how he played with the negative space to imply the trees. I also love how he used texture to differentiate the ground along with the sky and the background. 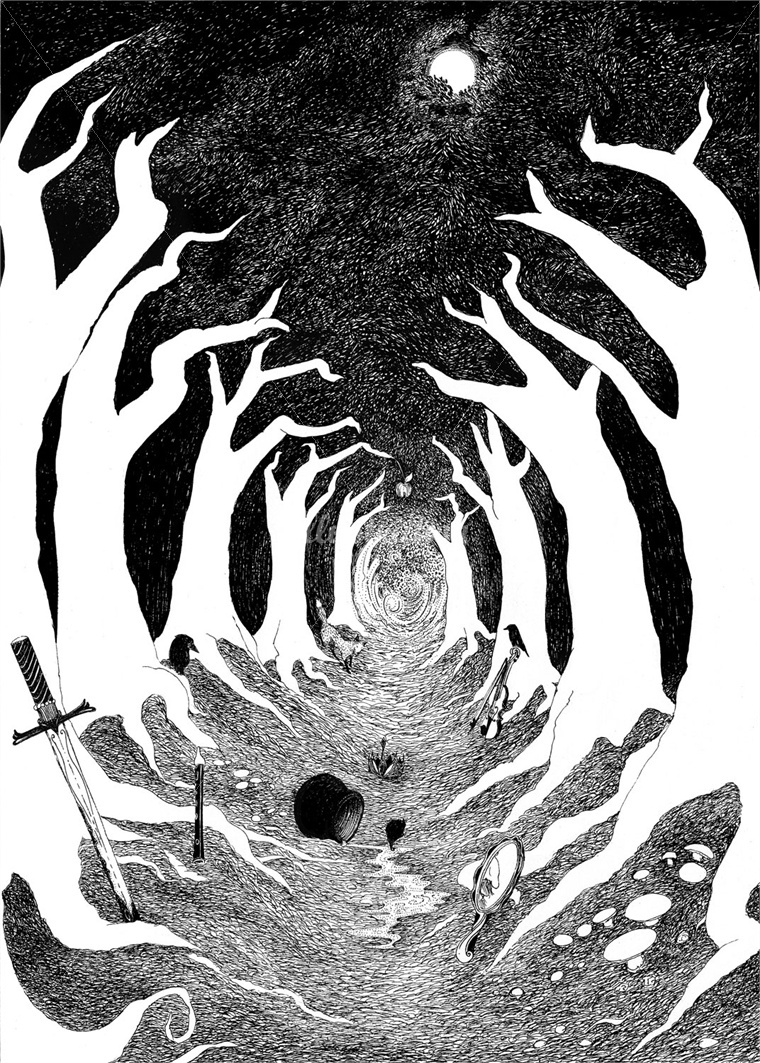 The third artist that I’m going to reference is Ugo Gattoni. I love how he implied the horse by changing and wrapping the pattern of the building onto the horse. 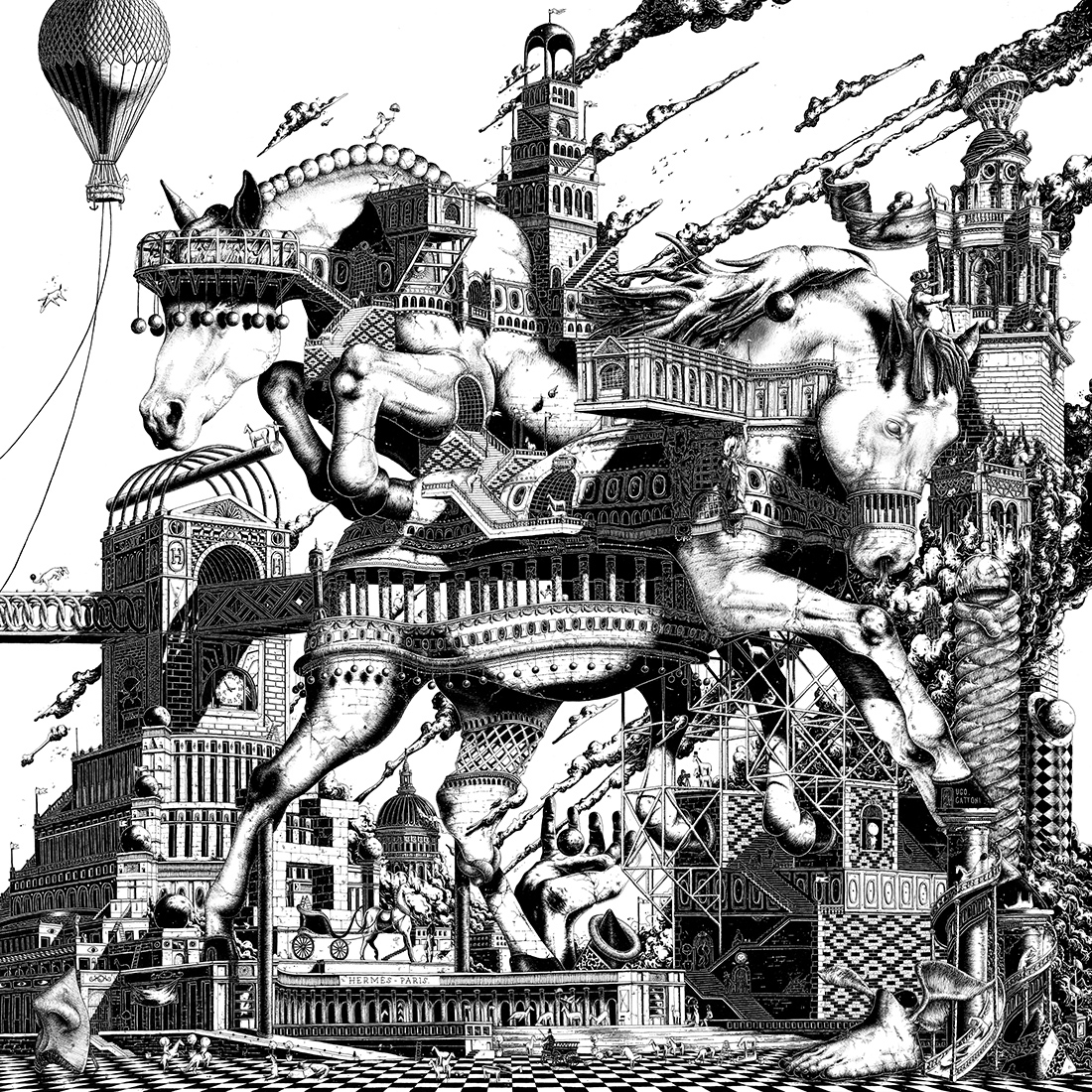 The last artist I’m going to reference is the manga XXXHOLLIC. I love how the mandala designs her manga cover page and how she incorporates unique borders for each volume.