WARNING: Please ensure that the room you are rusting the metal in has GOOD VENTILATION. Just like fixation, the process stinks like hell so if you don’t want your room to stink like a gas chamber, PLEASE OPEN YOUR WINDOWS OR SOMETHING. Get some air in.

Woah, sounds like dangerous shit but trust me, it’s not. You can obtain Hydrogen Peroxide from any pharmacy but I chose to get mine at Unity because it’s way cheaper than any Watson or Guardian. They use Hydrogen Peroxide as an antiseptic for injuries, so don’t go thinking it’s something potentially dangerous like Hydrochloric Acid.

I used a random brand of Sea Salt (really, it’s just for oxidizing and absorbing the moisture, so the brand does not matter).

For the White Vinegar, I used Heinz’s because it’s the easiest to find at any supermarket.

GET TWO SPRAY BOTTLES READY TOO. 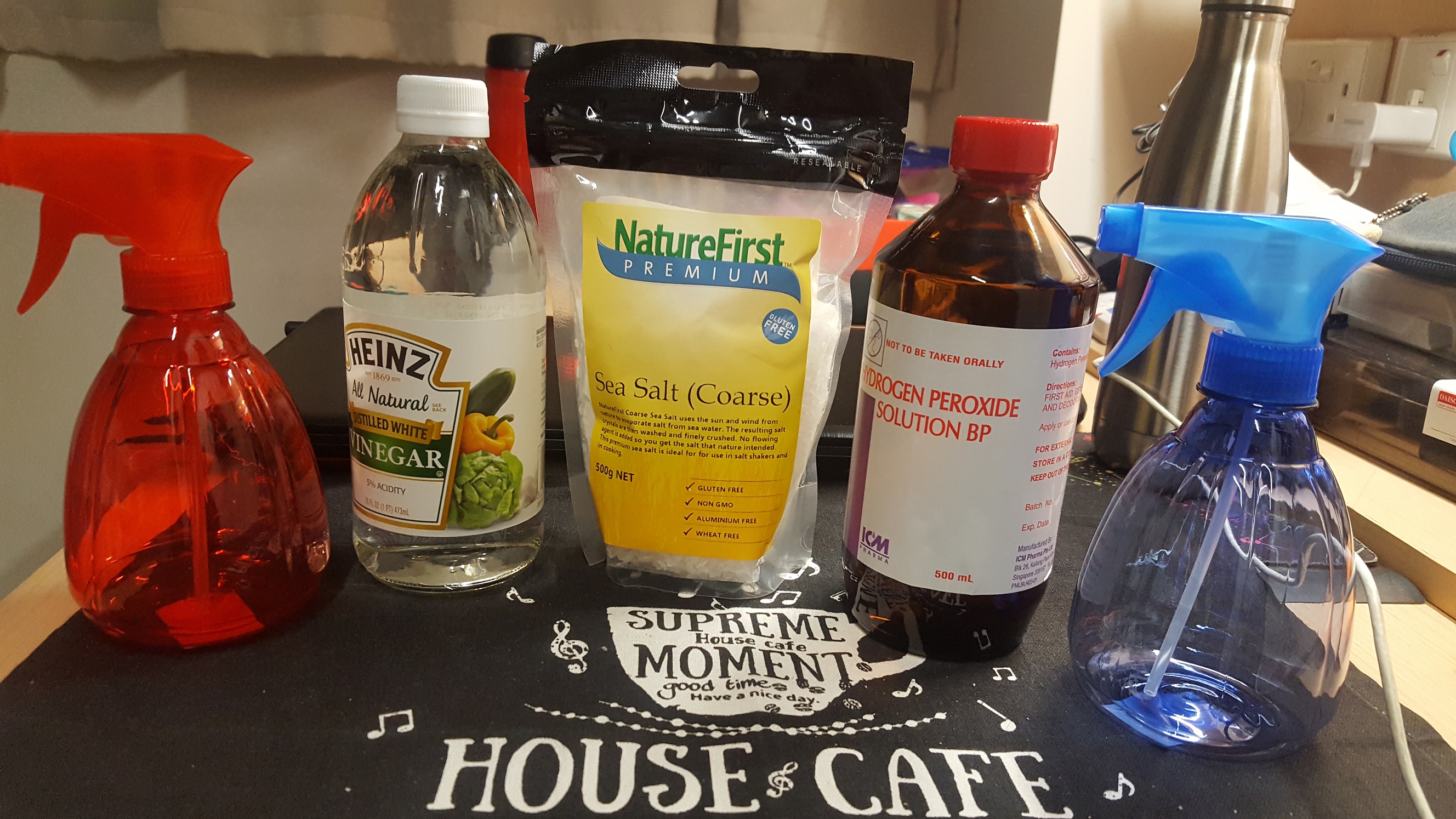 Fill some Hydrogen Peroxide into one of the Spray Bottles. Same goes for the White Vinegar. It would be wise to get two different coloured spray bottles to ensure you don’t mix it up. 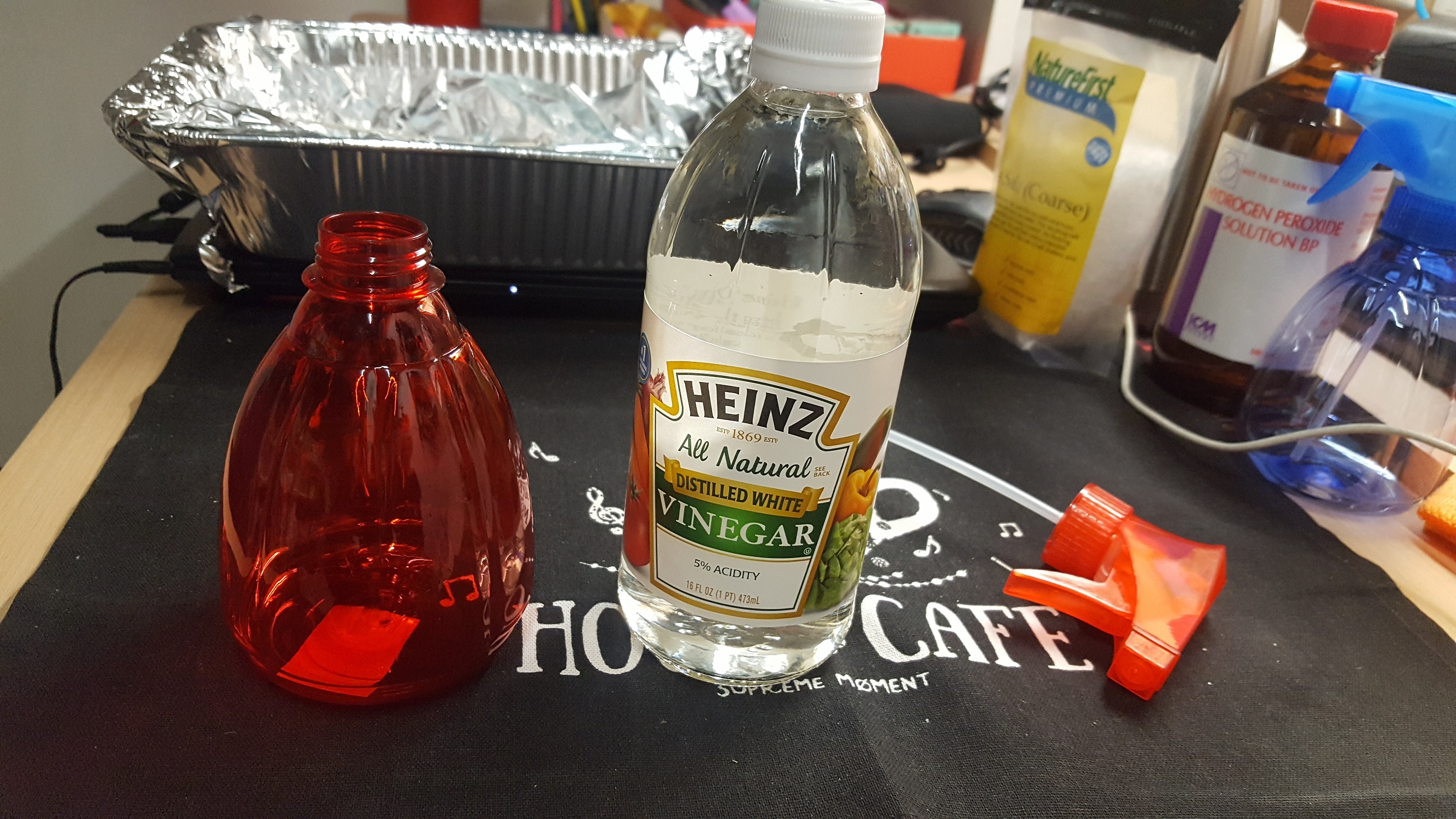 I used Red for White Vinegar. 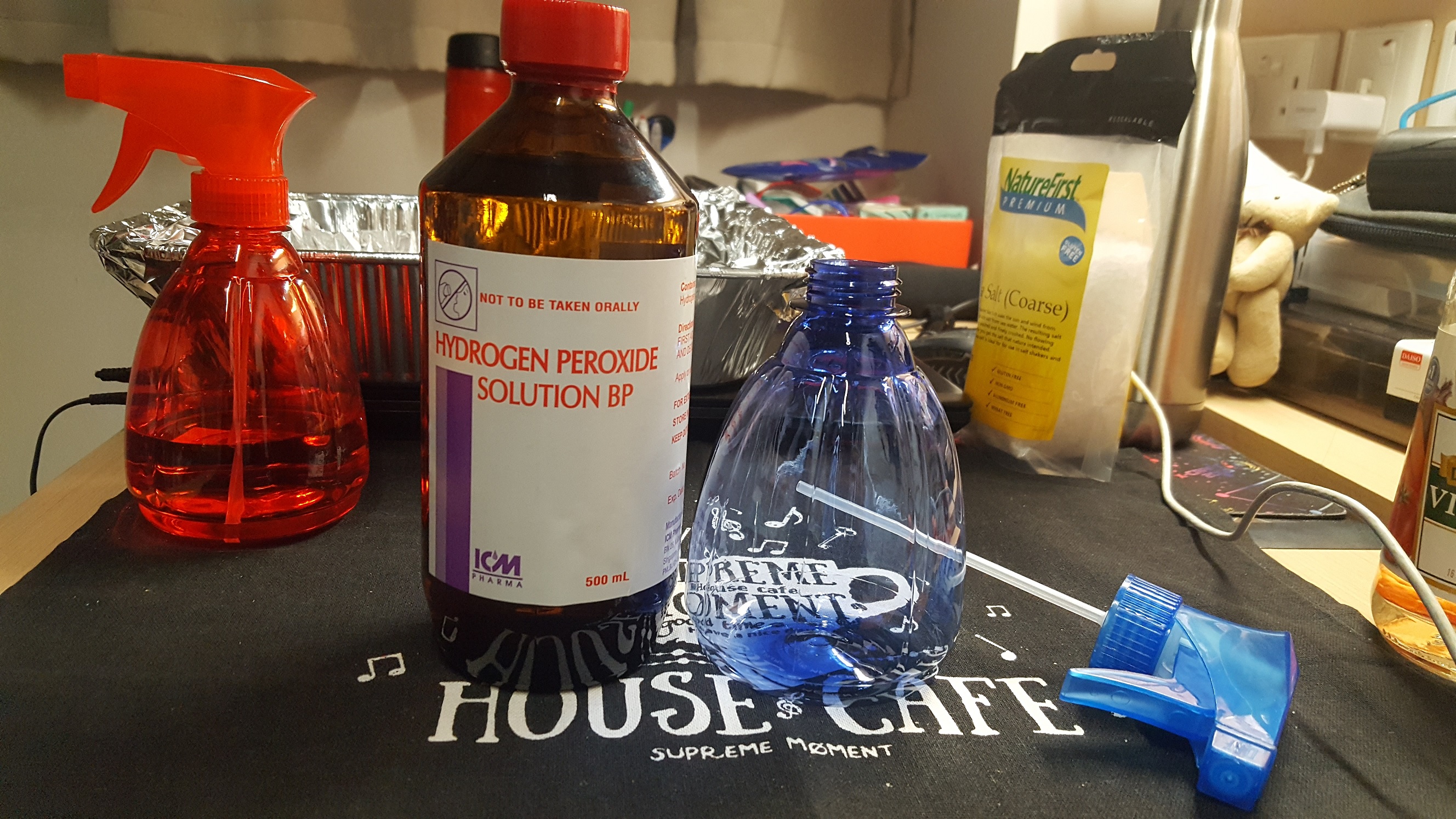 I used Blue for Hydrogen Peroxide.

For me, I used an aluminium tray and some aluminium foil. This is to hold your metals while they rot to hell. 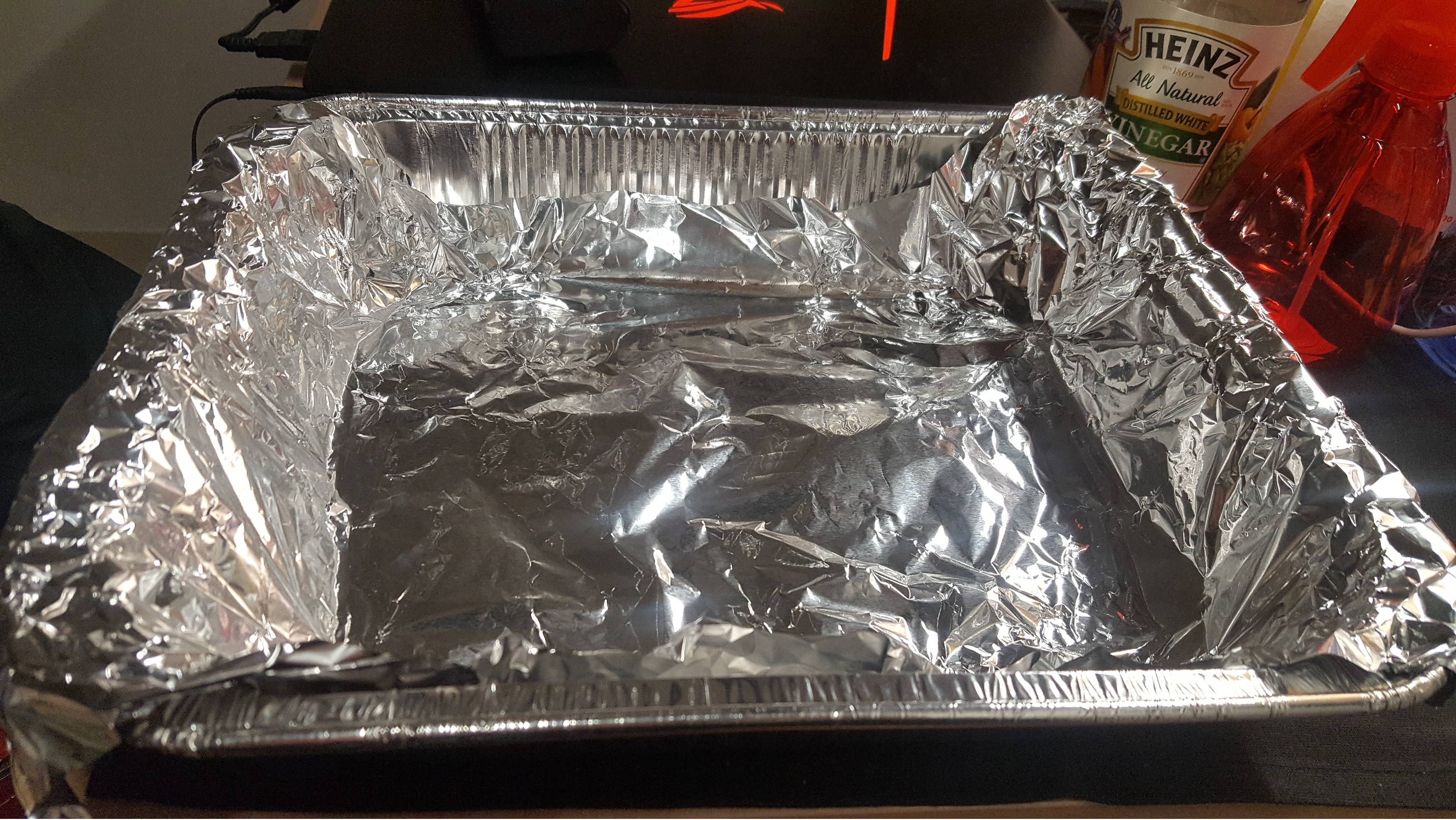 A sparkly metal tray wrapped with a ravishing metallic foil.

Please don’t follow this step. I mean, do get a tray, but NOT ALUMINIUM.

It rotted through my tray. I don’t know how, but there was no hole or anything. If you really want to use an aluminium tray like mine, do put a newspaper or something underneath to protect your table/floor/shelf. You can throw everything away after you are finished with the rusting.

STEP 4: Get all your metals ready. 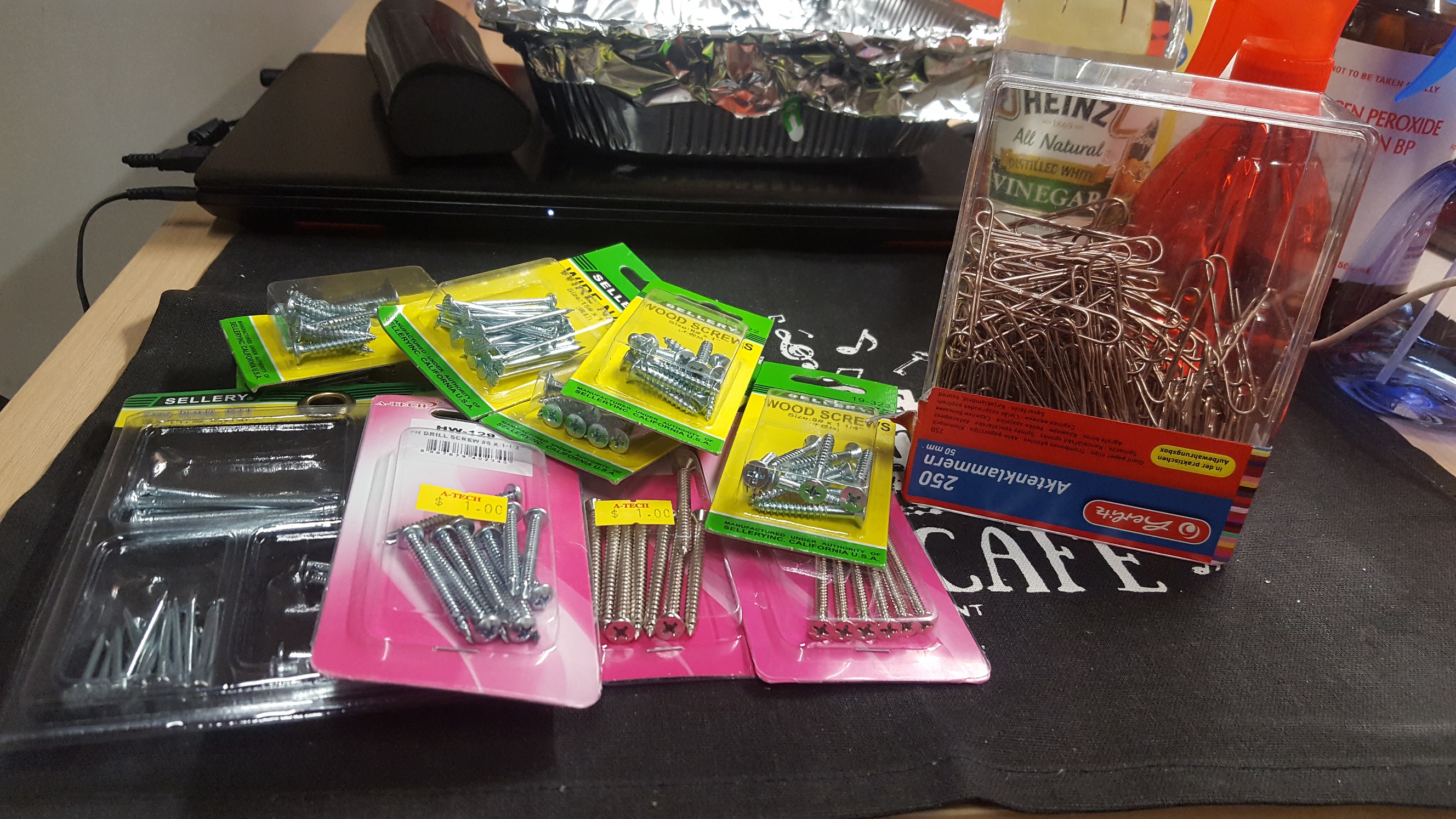 Depending on your project, it would be good to get a variety of metals.

For me, I worked with various sizes of nails, bolts and screws. I even used paper clips because I wanted that copper sheen. 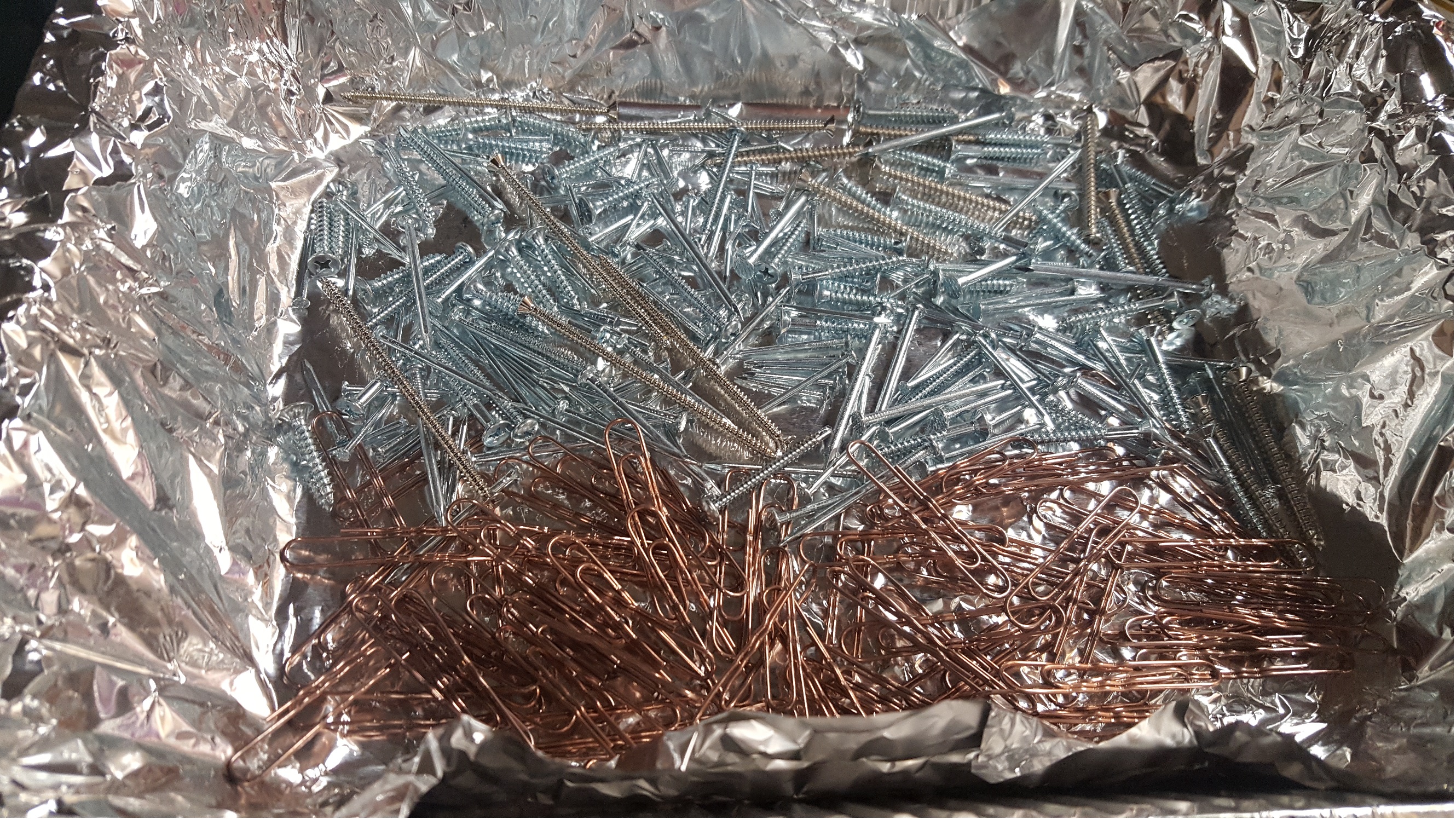 Do it neatly, please.

This is to ensure the spray and whatever gets to everything. We don’t like halfassed rusting- that is not convincing at all.

STEP 6: Spray and garnish it with salt. 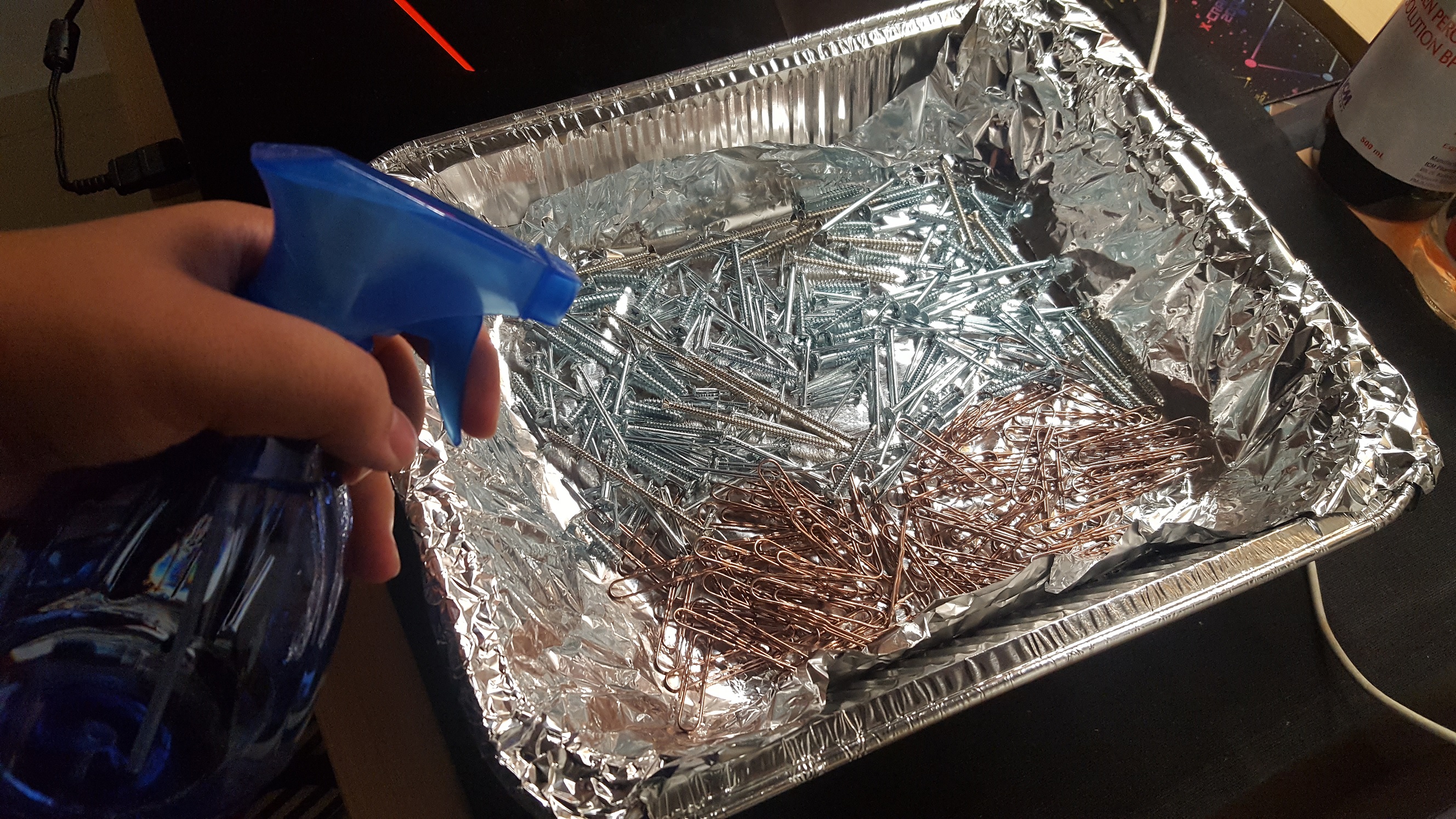 Spray the HYDROGEN PEROXIDE first. Make sure that all metals are well-covered. 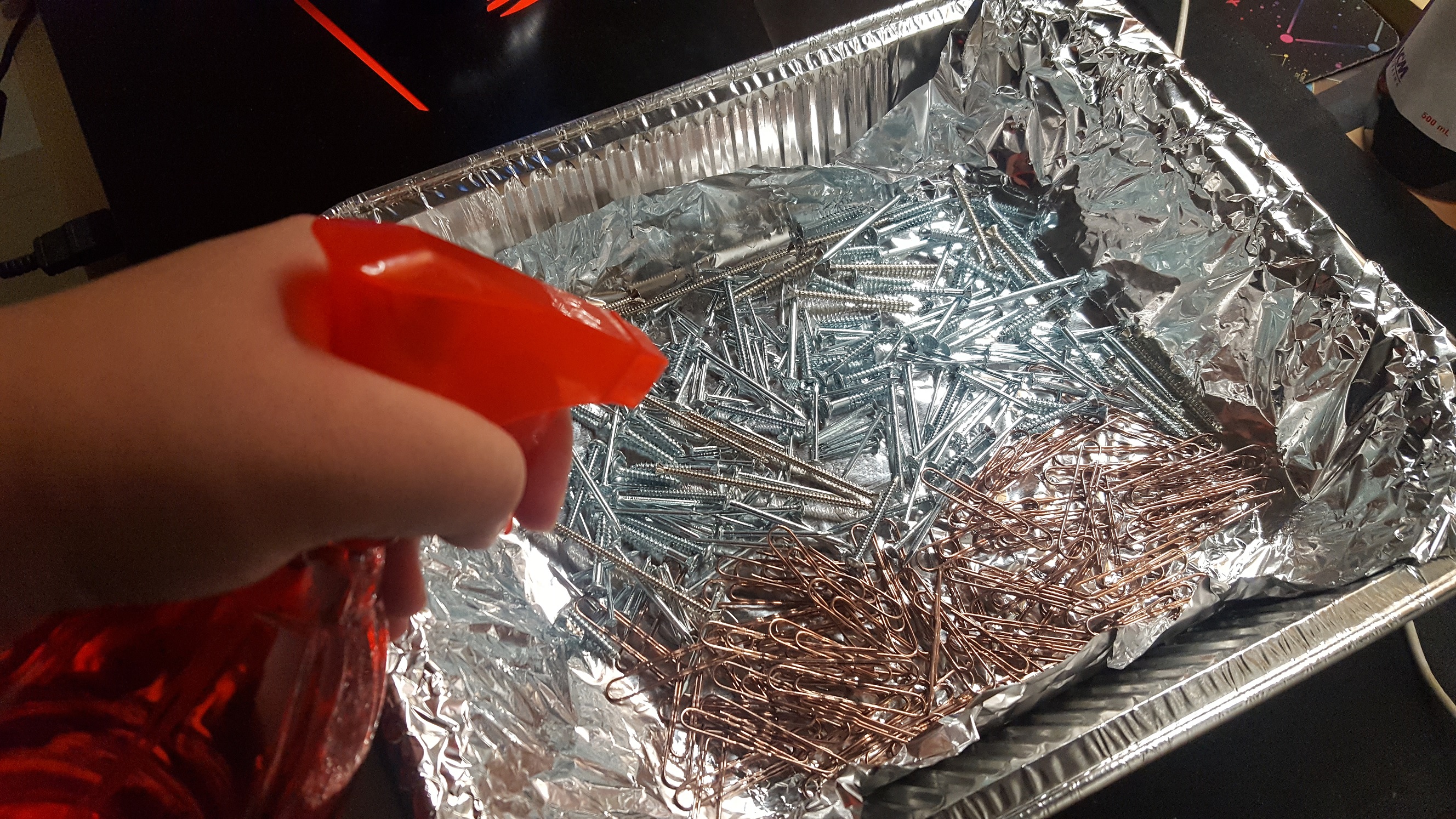 Immediately after, spray the WHITE VINEGAR. Again, make sure that everything is covered. 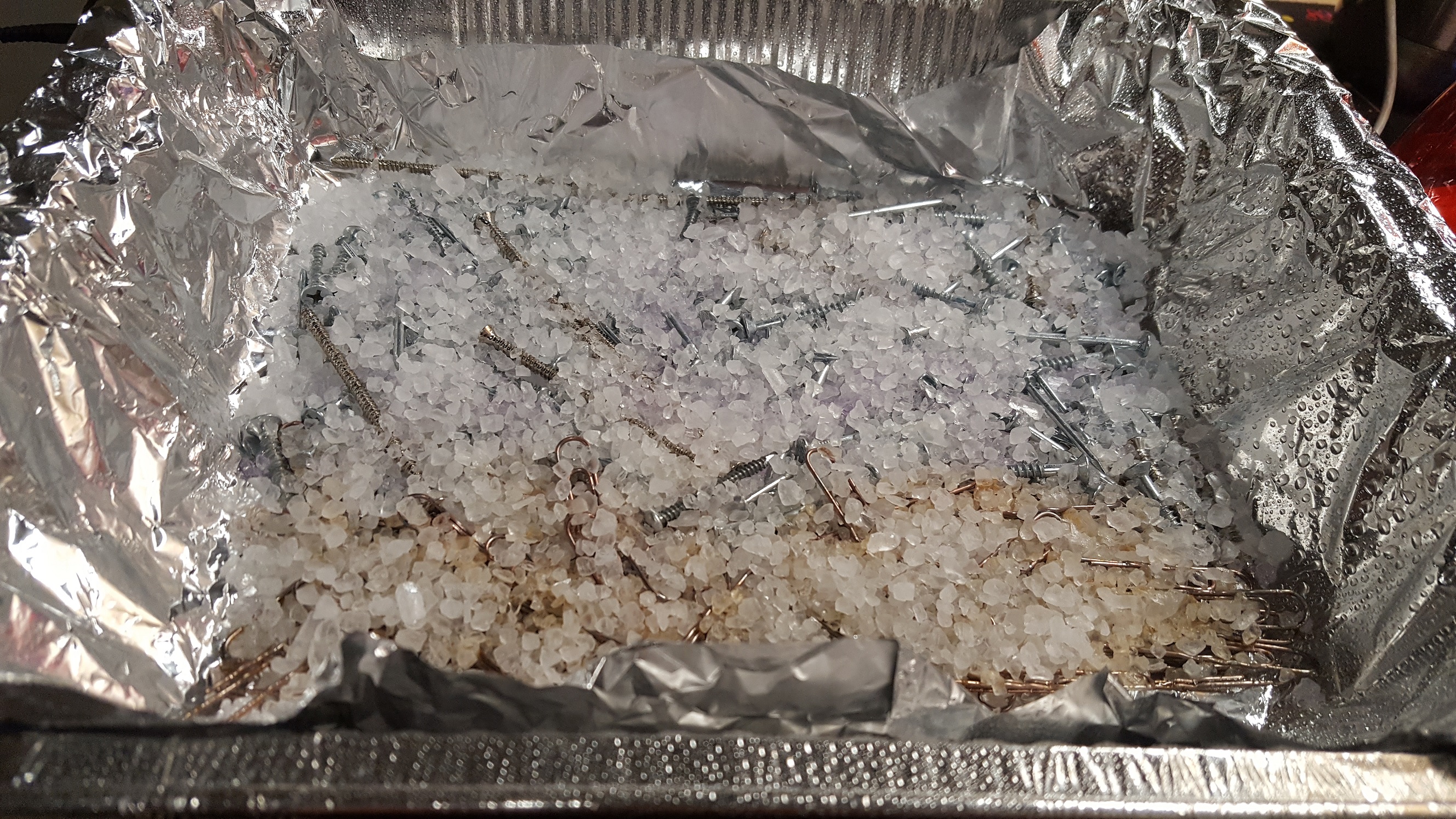 Afterwards, cover the whole thing with the sea salt you have been wondering about. I guess you can choose to omit the salt, but it will take longer to rust.

Let it rust! It will make fizzling noises like you just opened a can of coke, and it will definitely stink because of the rust and white vinegar. However, it is perfectly okay. Just leave it there. The longer you leave it, the better the rusted effect. I left mine alone for 2 weeks to obtain the state it was in the project. It rusted even more after I built my structures, and it was quite prettily rusted by the day of presentation. 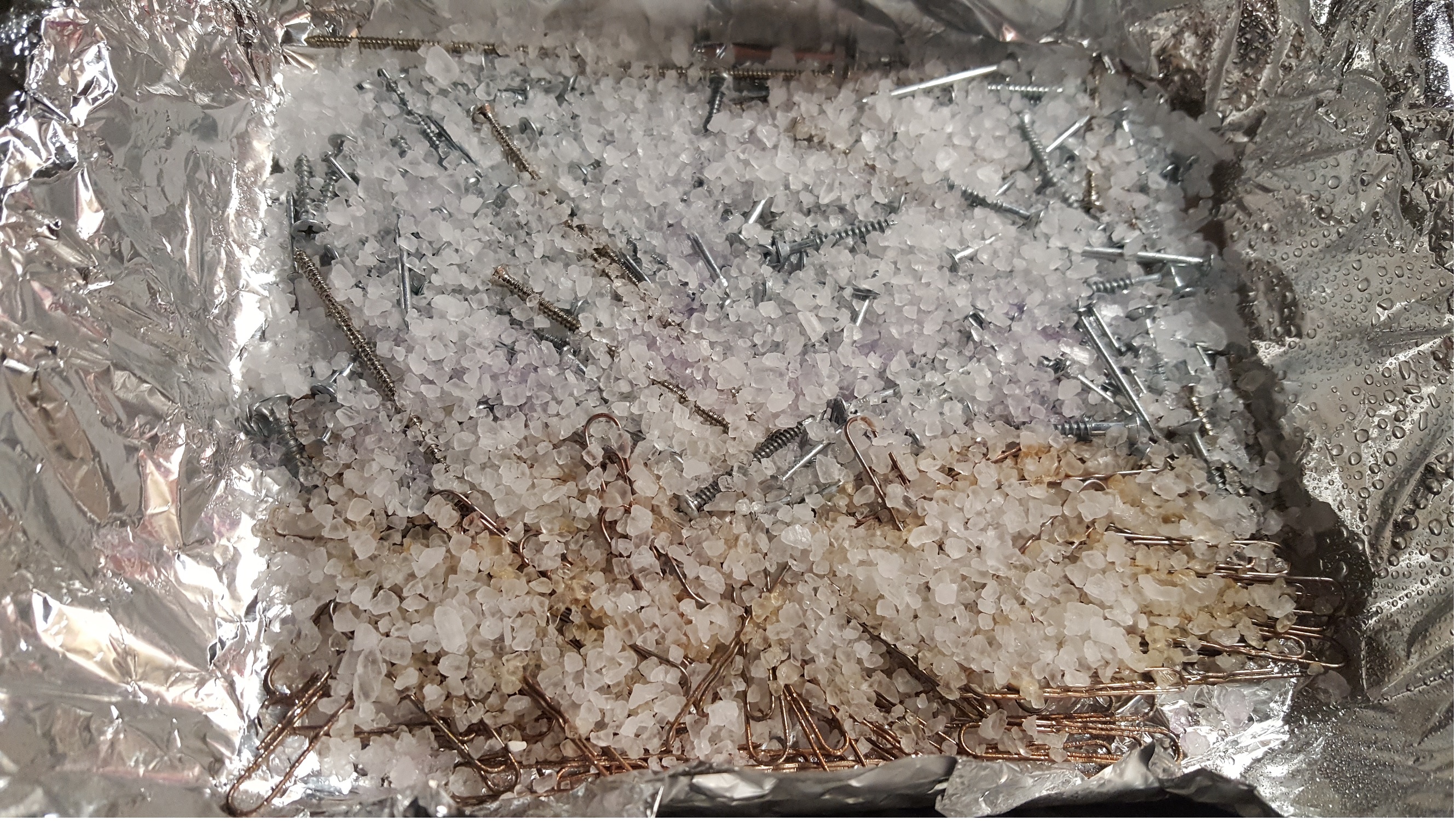 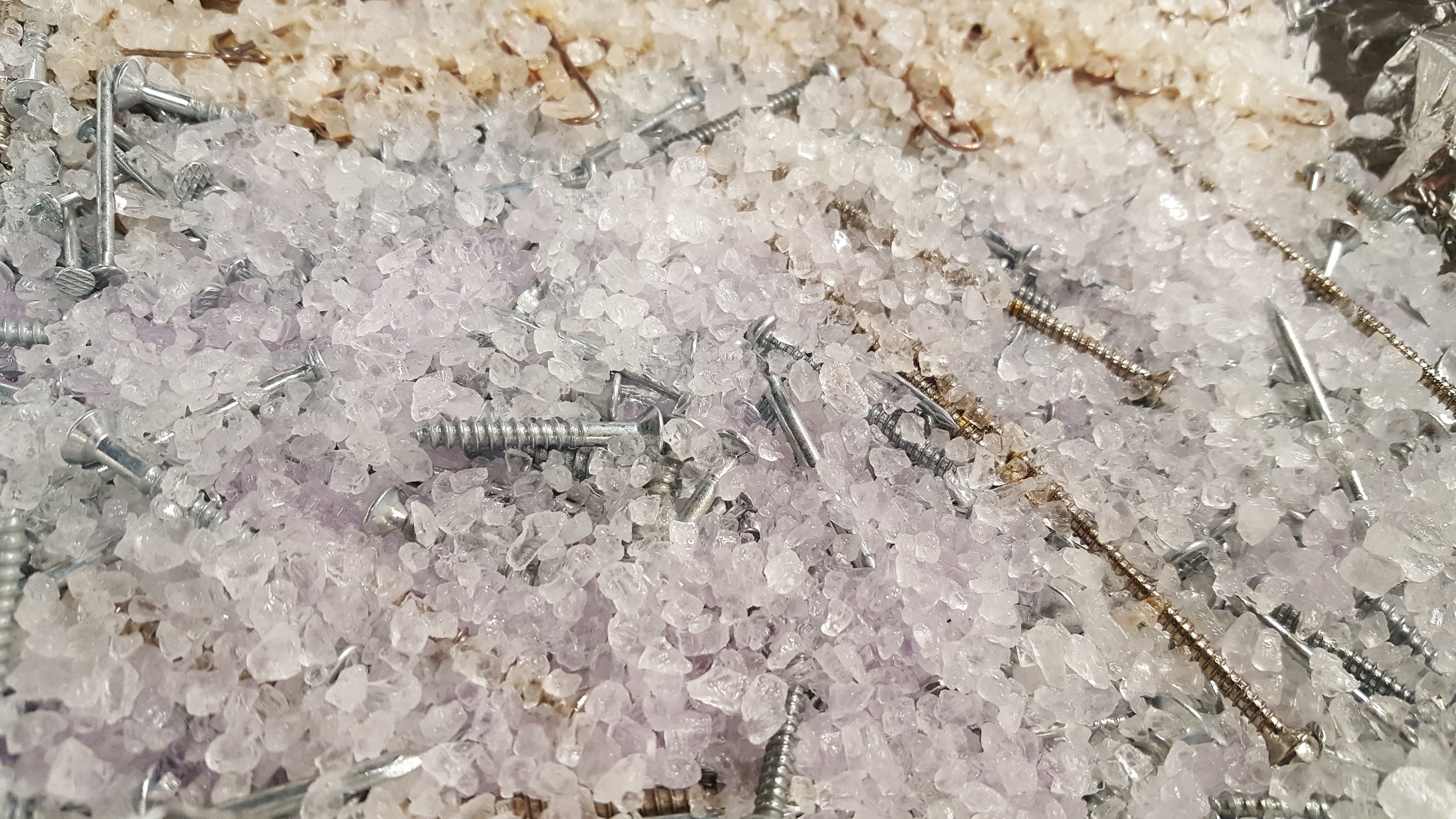 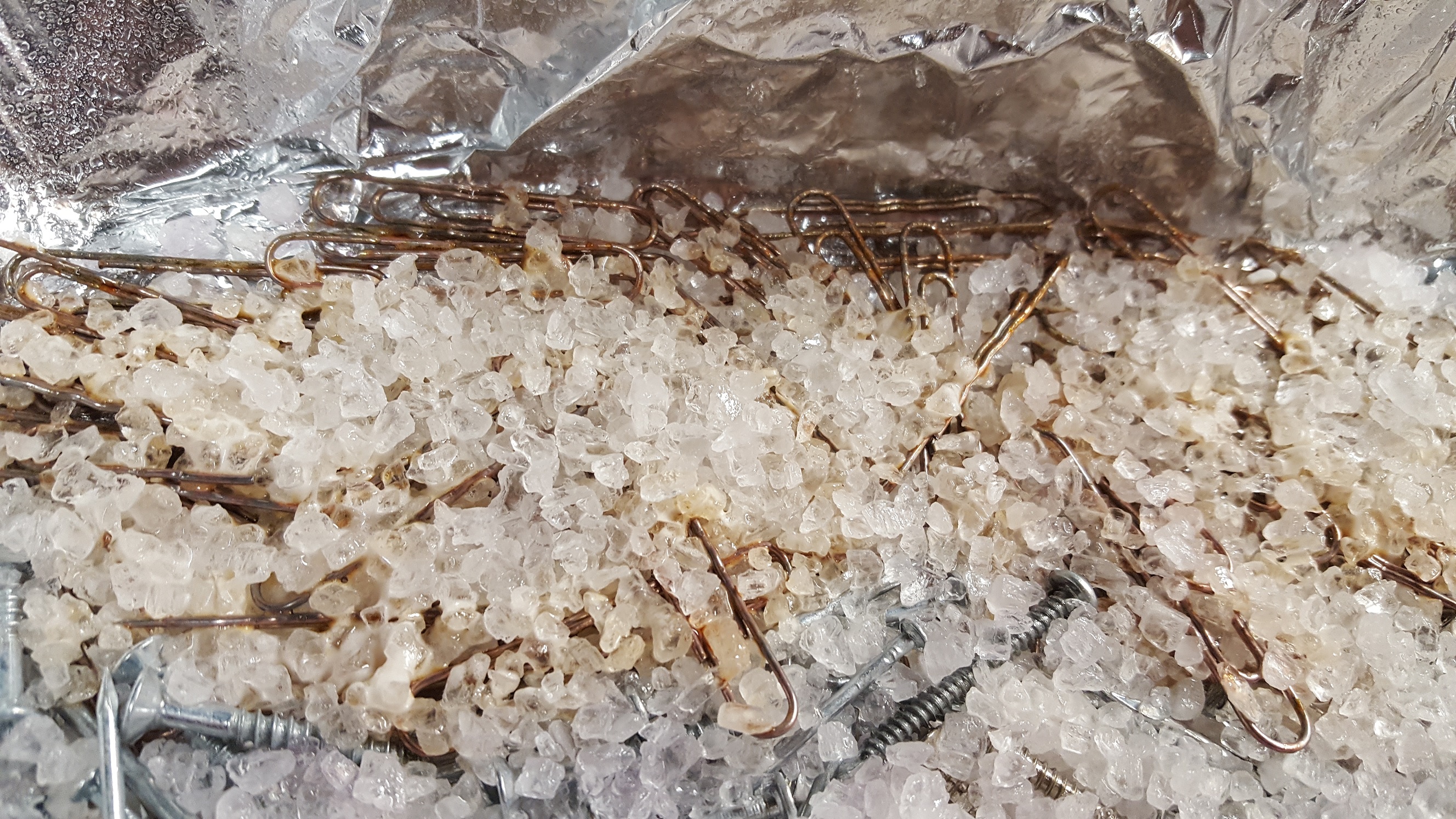 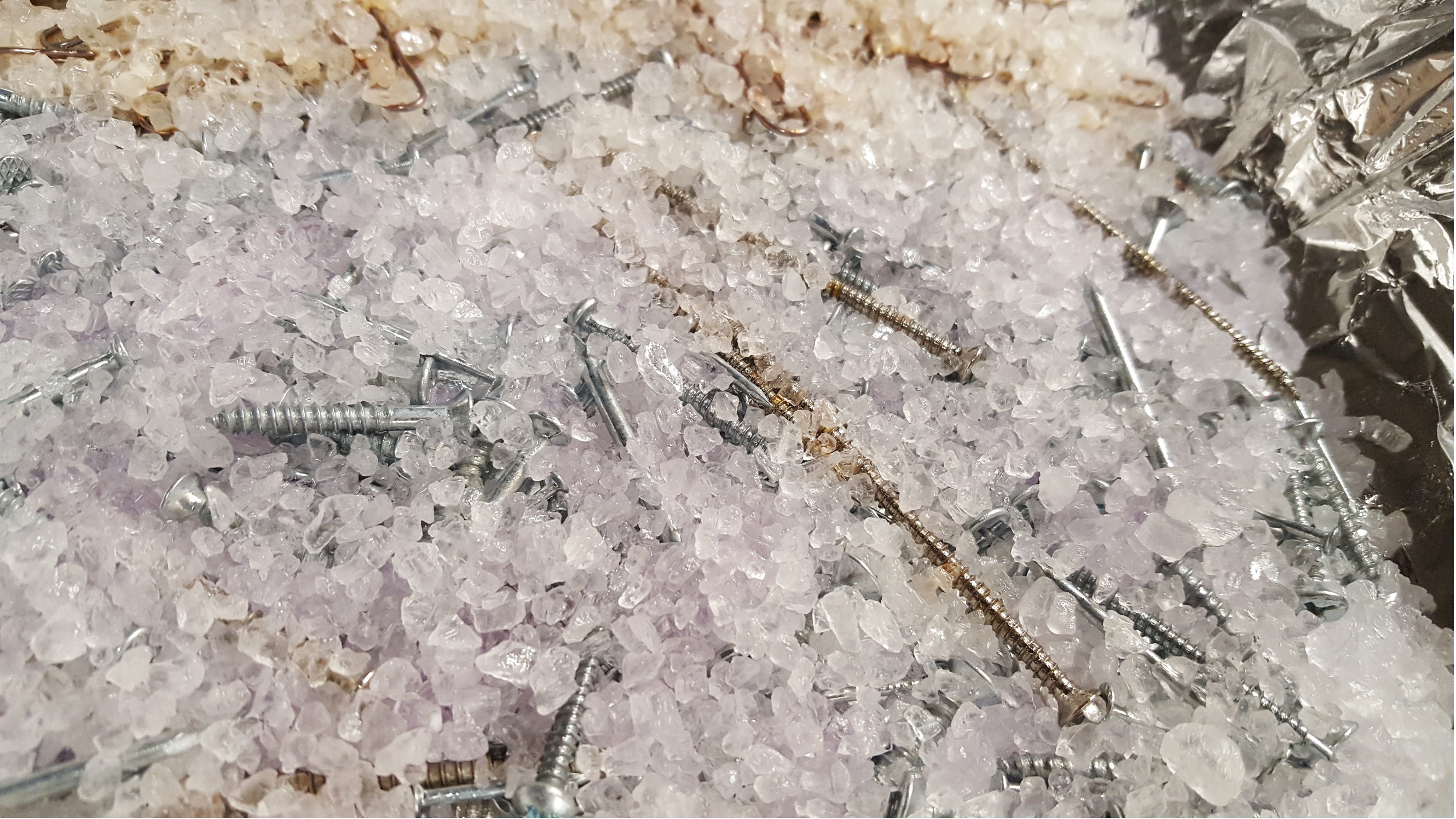 The rusting process will end up dyeing your salt another colour. This is because the metal rubs off onto the salt as the salt absorbs the moisture mixed with metallic elements.

It will tend to look pretty, but you are advised not to keep those dyed salt bits as a souvenir. For one, they really stink. For two, I don’t know if it will start spreading its joy of rusting to your other materials.

So friends! This is how you rust metal.

P.S This is my first attempt. I ripped the method off from Google so if you have better methods then by all means!