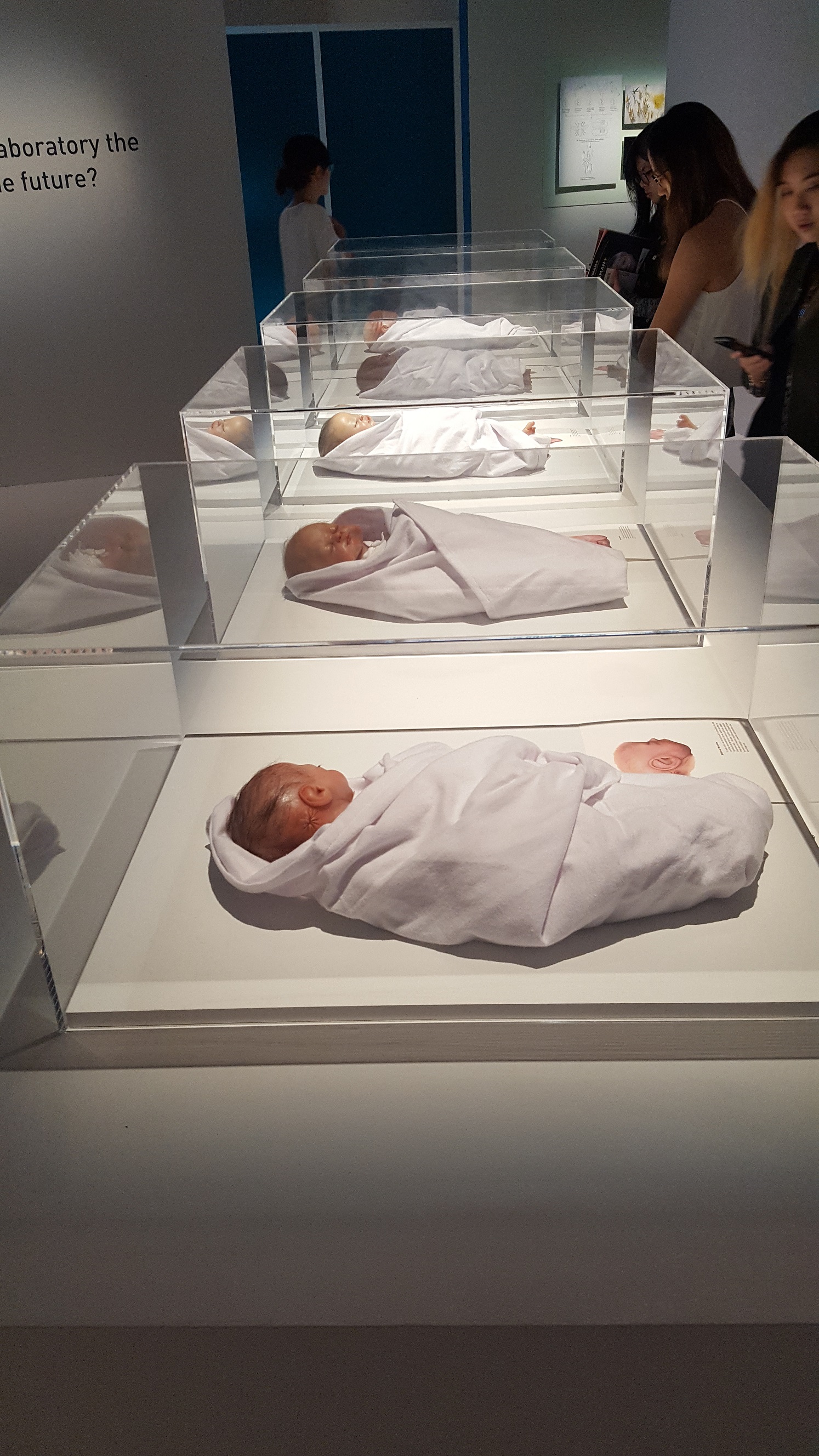 This work consists a row of life-like and realistic looking babies encased in glass containers, each baby having a birth defect. A description below each baby describes how the defects can be corrected through medical procedures i.e. human bodily modifications.

My initial impression of the work was about how close to reality it drove, thus making me ponder about issues of ethics- how far can alteration of the human body go to still be deemed acceptable. The artist expresses concern about how far might parents go to give their children an advantage, and under what circumstances justifies modifying a child’s body. While I feel that it is justifiable for the human body to be improved should disabilities be present (since we cannot control birth defects), to alter the body based on personal preference when it does not have disabilities may be pushing it too far. Furthermore, the display is arranged such that the infants are placed as though they are in their hospital cribs. The life-sized babies also exhibit a high sense of realism because they resemble actual new-born infants, which makes us feel that the issues discussed are much closer to us than we realize.

Should I look at the exhibit alone, I may not have figured out about what the artist is trying to bring up about how far should human transfiguration go, but the text helps me to understand that on top of how birth defects are corrected to ensure good health. There could have been more exhibits displaying how perfectly normal babies are genetically modified to have better qualities despite already being normal to begin with. 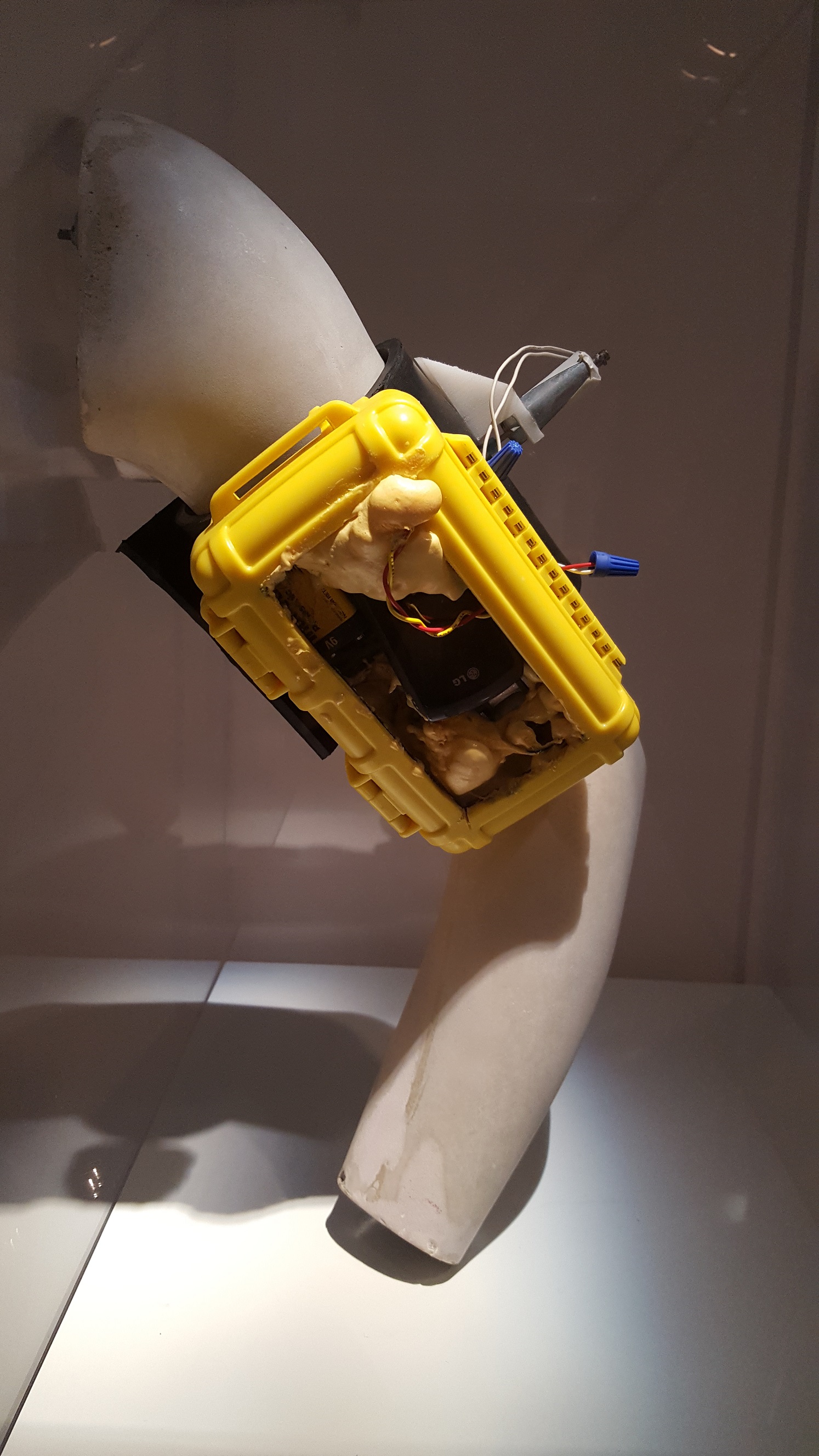 This work is displayed such that a device made from various materials is fastened onto a mannequin arm, before being encased in a glass container.

My initial impression of this artwork was confusion. I did not understand what it was for, but I figured that it was something which had to do with an electronic device which could trigger something in our human body. In the container fastened to the arm, there was an LG phone and several batteries inside, leading me to think that there should be a command system activated through the phone, which would cause something to happen to the human (since it is attached to an arm).

After reading the text, I realized that the artwork was an emotional prosthetic which causes physical pain to remind the wearer to be alert. It was alike what I had expected. The artist had created this device because of concerns about how people are generally unconcerned about deaths sacrificed in war. During the United-States-led war in Iraq, it resulted in a lot of deaths. While the number of Iraqi deaths is underreported, an exact account of U.S military deaths is broadcast. However, though broadcasted, they were still undermined compared to cases more relatable to the masses, such as kidnapping cases or burglaries. Hence, to bring further attention to the death and violence in war, the I.E.D. is a wearable device which creates physical pain in correspondence to American deaths in war; an electronic solenoid is triggered to drive a needle into the wearer’s arm, drawing blood.

I feel that while idealistic to make everyone worry about the war, it is a justified way of ‘payment’ for the deaths in war. However, concerns about ethics would be brought up when we discuss about who should be exempted- the old or the infants, for example.

While the idea is sound, the presentation of the model could be improved to better show its function. Perhaps, a human reaction could be displayed on the mannequin to suggest discomfort at the death of a soldier.