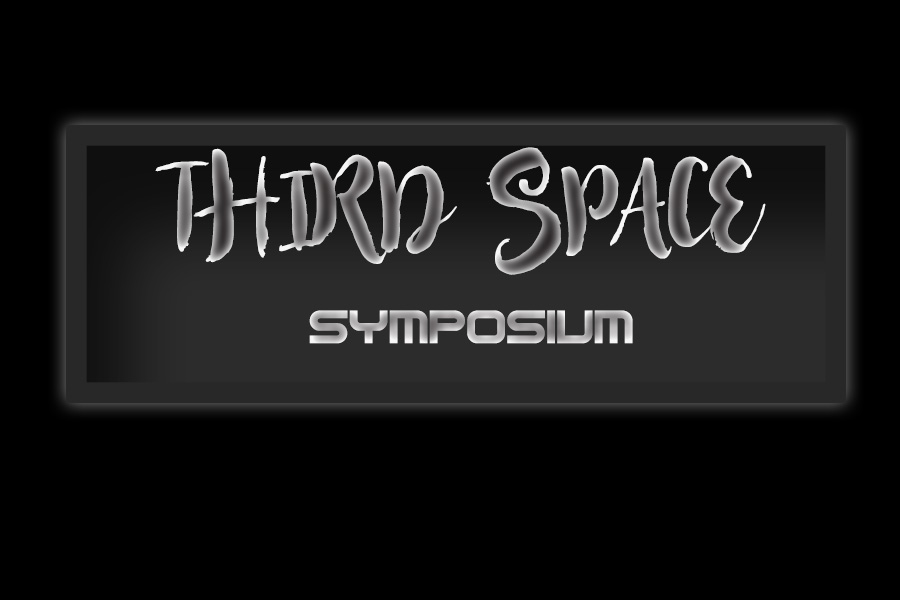 Summarize the three day event (you will be attending two sessions) in a 500 word Symposium Hyperessay, with a focus on the two keynotes by Maria X and Matt Adams, the two performances by Jon Cates and Annie Abrahams, and the global roundtable discussions.

In this essay, I will be referring to Matt Adams’ Keynote and Annie Abrahams and Co.’s live networked performance from the three-day Symposium. I would like to talk about how the Third Space allows people to come together and create a piece that can send a message to the messes. 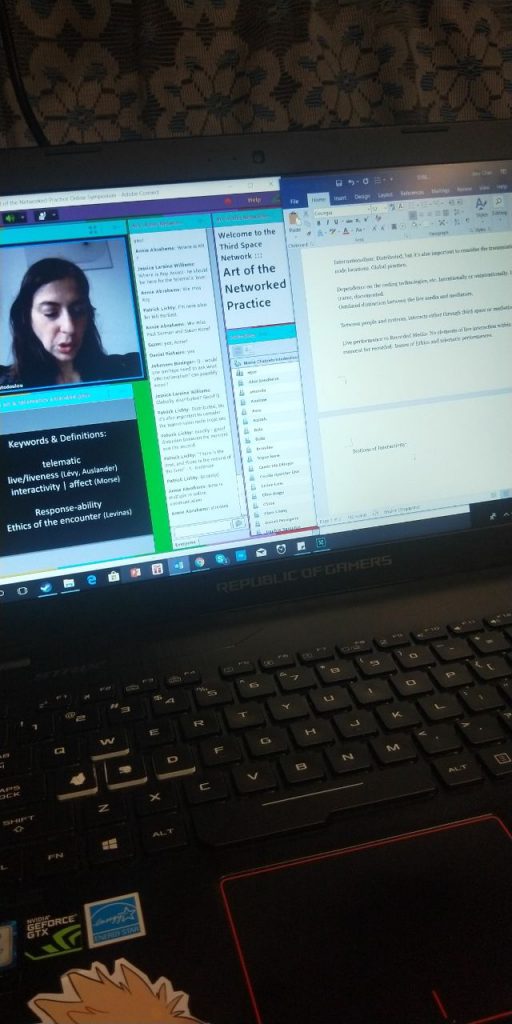 On Day 1, Annie Abrahams and her partners performed from their respective homes and delivered a performance by syncing their actions e.g. filming a white surface, etc. It started off with the participants announcing their latency and saying “eggcellent”, which in my opinion was messy but sounded therapeutic at the same time.

I felt that the Third Space in this performance was extremely well-explored. Not only did Annie and the participants make use of the live video feeds, they also made use of sound (which was very clear because it is through a video) and the appearance of the video feeds. With the perimeter of the screens lighting up at the same time whenever anyone spoke from their end, it added the effects.

When the performance truly begun, the participants voiced a constant lull of comments which sounded very synced, comforting and attractive even though it is so random and illogical. There were also small mistakes made along the way such as Igor not being able to find a white screen fast enough but personally, it added to the beauty of the lack of symmetry. I think the magic in the piece lies in the incoherence in the webcam pieces are consistent.

On Day 2, Matt Adams talked about Blast Theory and their projects. He mentioned Kidnap, Uncle Roy All Around You, I’d Hide You, My Neck of the Woods and My One Demand. Their projects revolved around the concept of people being together in the same place and silent contracts are formed- this is different from a community. This contract tests people’s willingness and openness to embrace agreements on a platform they may not be comfortable with.

Blast Theory makes use of the Third Space as a platform to connect both the online and the physical people together. His works addresses cybernetic concerns for circularity, communication and control. There is also a utopian sense of responsibility and freedom, where social relationships are made possible by the internet. This would have been possible in the past where commons are shared, but with modern private ownership and privacy, sharing domains must be done through individual consent.

His works also explored power flow between people, the audience and the set of performers. In society, there is state control over the body and power relationships, which foregrounds the way we experience and play with power. When someone holds more power, such as in Kidnap where helpless and unknowing members of the public are kidnapped by Blast Theory, the ‘victims’ can essentially experience more things that may not be within their comfort zone. On the other hand, people on the Third Space can see what is going on yet not being as intimidated or affected that badly because it is as though whatever goes on behind the screen is not real. This puts people on the Third Space in more power.

In conclusion, I would like to reiterate how the Third Space allows people to entangle the fine line between a Telematic space and reality. While it engages the audience to come together as one to create a masterpiece as though they are not separated by distance and spaces, it may also generate a discussion about how far can people go to establish a sort of control over others, such that it does not become a crime-like while retaining its realism.

We can be scared of many things, the imagination as innocent children distorting our happy reality. In the end, the dictation of our own imagination become the root of our own fear. We cannot gain full control of it.

My inspiration is derived from a photographer named Nicolas Bruno. He recreates his dreams during sleep paralysis (ever since he was 15) through photography. He is admirable and unique because not only he touches upon the genre of horror (which artists usually feel uncomfortable to contact with), he also explores how to visualize nightmares and fears, a feat difficult for many. I filmed this video in my home, because it is the place where we always go back to; our safe abode. Nevertheless, it is also the place where our fears take root in because we can often find fear in the place where we take comfort in (bed, closets, bathroom, the garden, etc.). It is the most terrifying when even your safest haven is attacked by your fears and there is now no more back-up plan for you to hide in.

Furthermore, I emphasize this scariness by filming in complete darkness, highlighting how even in the place you call home, there is no light for you to go to- it’s an eternal darkness, and a trap you can potentially never get out of.

I also put on a Noh mask, which is a mask I am frankly quite terrified of ever since I was young. I want to use the idea where you become your own fears because your own imagination and ideals are what dictates what you are afraid of.

Next, I added one of my best friends; squawky chicken. It is a toy that I like to play with, which shows how childish I really am and perhaps, also the inner child in me. This chicken is a great personification of me in my opinion- childish, friendly in bright colours- usually a very comforting companion for me especially when I am bored and lonely. However, this time, I placed it in a scary and dark environment- not friendly at all, and the usual comical face of the chicken becomes one of petrifying terror. In a sense, I am transforming my comfort into my fear once again. It is as though the chicken (me) is trapped and has no way to escape because my own fears are overpowering me in the place I once call home.

Altering my identity through letting me conceal who I really am, and allowing me to change into another thing afterwards?

The video selfie helped me to alter my identity because it gives me an opportunity to become someone entirely different. It allowed me to express a message which I would usually not be able to convey in real life. It conceals my identity because it is not live and physical, meaning that should I show this video to a random person on the street, they will not be able to figure out who I am, and cannot do so either. In this video, I am no longer Joey, but a creepy masked guy with a terrified chicken. I would also say that the darkness and the concept of home being engulfed with fear contributed to the idea that I am my own nightmare, and the chicken is a personification of myself.

Thank you and sorry if you got scared by the video. Have a cookie!

For our Art of Destruction project, our group decided to go with video as our art medium. We decided to put together different definitions of glitch to create a whole glitched video. First, we took random videos filming weird and every day scenes that were inconsistent. Then, we edited the videos we took to make it unnatural; speeding up, slowing down, adding filters, etc. These changes took place gradually, from the little glitches until it wildly subverted our expectations and had no calculated order.

These were the first 2 glitches; one because it does not make sense, and two because it was not natural. Yet, a sense of continuity and a small curiosity about what random scene would come next was still retained. The final glitch occurs because as three people in a team, we have different editing styles and ideas with regards to how to glitch our videos and what scenes to take for our video

As Jon Cates has stated in his interview, “this approach to noise, or noisiness, or dirt, or dirtiness, is a way to foreground as you say, an aberrance or perversion of normative message or what we might perceive to be logical reasoning”. This project embraces the abnormalities as an addition to a complete artwork, with each layer concealing a different original idea. Also mentioned in Glitch Manifesto, “destruction can change into the creation of something original”. It is precisely because each part is so broken and incomplete that they complement each other despite not being cohesive. As a result, it becomes something original because it is not an artistic norm. Over here, we can highlight how destruction helps to piece together a new form of art.

Art is defined as the expression or application of human creative skill and imagination, typically in a visual form. In society, people are usually accustomed to normal ideas because of what society imposes on us. The abnormal is rejected and regarded as a disability. As a result, everybody’s ideas end up similar to be accepted. Glitch and destruction is an act of artistic expression because they become original by breaking down normal ideas with creativity and imagination. As Chip Lord has implied in his interview, to create a new form of original art is to go against the currents of natural currents of conventional expectations. They ignore social norms and create something entirely new to be appreciated. It is when “problematic ideas” become accepted that they become less original.

Hence, the lack of cohesiveness, the disturbances to the natural sequence of our videos and the randomness of the scenes which discourages understanding creates a destructive art piece; one that is illogical yet still a complete whole in the end. It is imperfect, but we recognize this imperfection and flawed art piece as a proper composition.

For our Art of Destruction project, our group decided to go with video as our art medium. We decided to put together different definitions of glitch to create a whole glitched video. First, we took random videos filming weird and every day scenes. Then, we edited the videos we took to make it unnatural; speeding up, slowing down, adding filters, etc. These were the first 2 glitches; one because it does not make sense, and two because it was not natural. Yet, a sense of continuity and a small curiosity about what random scene would come next was still retained. The final glitch occurs because as three people in a team, we have different editing styles and ideas with regards to how to glitch our videos and what scenes to take for our video. Hence, the lack of cohesiveness, the disturbances to the natural sequence of our videos and the randomness of the scenes which discourages understanding creates a destructive art piece; one that is illogical yet still a complete whole in the end. It is imperfect, but we recognize this imperfection and flawed art piece as a proper composition.