For our Art of Destruction project, our group decided to go with video as our art medium. We decided to put together different definitions of glitch to create a whole glitched video. First, we took random videos filming weird and every day scenes that were inconsistent. Then, we edited the videos we took to make it unnatural; speeding up, slowing down, adding filters, etc. These changes took place gradually, from the little glitches until it wildly subverted our expectations and had no calculated order.

These were the first 2 glitches; one because it does not make sense, and two because it was not natural. Yet, a sense of continuity and a small curiosity about what random scene would come next was still retained. The final glitch occurs because as three people in a team, we have different editing styles and ideas with regards to how to glitch our videos and what scenes to take for our video

As Jon Cates has stated in his interview, “this approach to noise, or noisiness, or dirt, or dirtiness, is a way to foreground as you say, an aberrance or perversion of normative message or what we might perceive to be logical reasoning”. This project embraces the abnormalities as an addition to a complete artwork, with each layer concealing a different original idea. Also mentioned in Glitch Manifesto, “destruction can change into the creation of something original”. It is precisely because each part is so broken and incomplete that they complement each other despite not being cohesive. As a result, it becomes something original because it is not an artistic norm. Over here, we can highlight how destruction helps to piece together a new form of art.

Art is defined as the expression or application of human creative skill and imagination, typically in a visual form. In society, people are usually accustomed to normal ideas because of what society imposes on us. The abnormal is rejected and regarded as a disability. As a result, everybody’s ideas end up similar to be accepted. Glitch and destruction is an act of artistic expression because they become original by breaking down normal ideas with creativity and imagination. As Chip Lord has implied in his interview, to create a new form of original art is to go against the currents of natural currents of conventional expectations. They ignore social norms and create something entirely new to be appreciated. It is when “problematic ideas” become accepted that they become less original.

Hence, the lack of cohesiveness, the disturbances to the natural sequence of our videos and the randomness of the scenes which discourages understanding creates a destructive art piece; one that is illogical yet still a complete whole in the end. It is imperfect, but we recognize this imperfection and flawed art piece as a proper composition.

Tanya and I worked on a project revolving around a normal girl doing a normal activity (Studying, surfing the net, etc.) on a normal day. It all sounds very normal, but there is a certain intimacy in this normal moment. We believed that but portraying a personal and private moment, we are recreating Third Space; a virtual platform consisting the fusion of the physical and remote space for displaying any ideas.

We break down the walls of a physical environment in the same way as Third Space does; this scene is not something someone would willingly show to other people and is meant only for themselves, yet they may post about it on social media, a Third Space.

We further reinforce this invasion of privacy by recreating the girl’s activities with two people; Tanya being the face of the girl, and me being the one who controls what she does. Despite being in two different places, we can recreate a moment of intimacy, reinforcing how Third Space allows us to form intimacy through exposure.

As Maria Chatzichristodoulou mentions, “the absence of textual narrative and the focus on movement and visuals made such explorations more intuitive.” Without any text or verbal communications, we have to coordinate our actions based on instincts and careful mirroring.

This is also a ‘fracturing of perception’, as Randall Packer has mentioned. There is a distinction of being in the first (Me) and second (Tanya) perspective, yet also simultaneously depicting the same scene. Third Space allows this distortion to happen, like watching a reality show on TV. 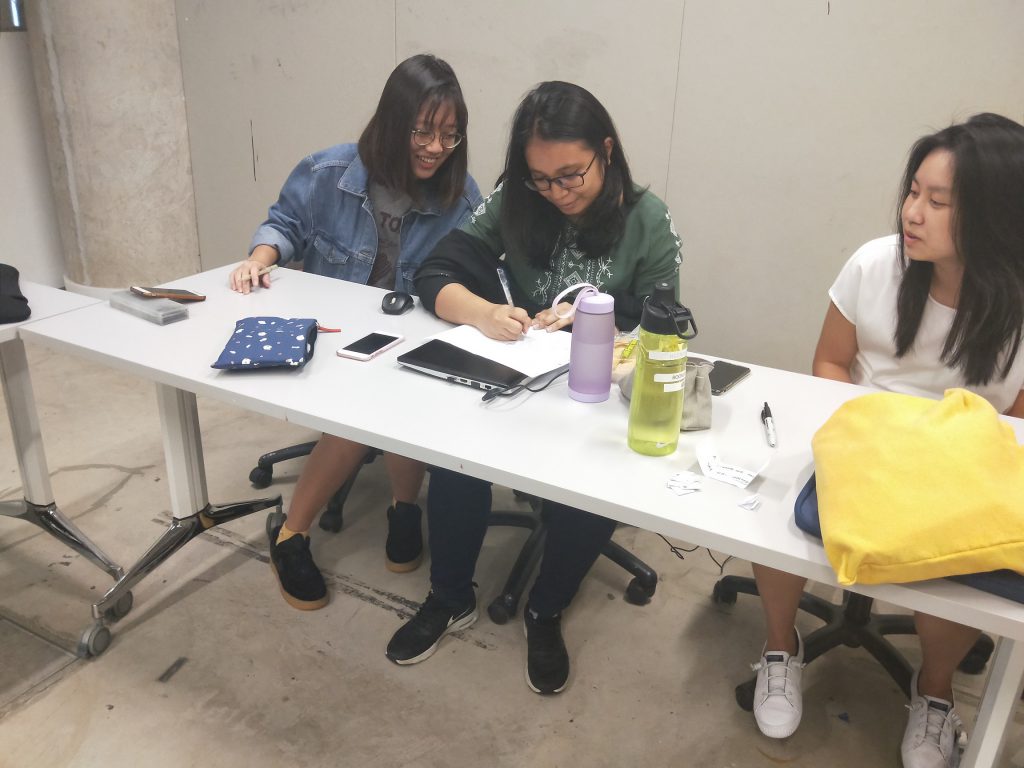 In our game, everyone sits beside each other and write a story together. Everyone is only given one or two lines to write within 30 seconds before they must pass the story on. Three people will also have to ballot a genre, a variable and a catchphrase to include in the story. There must be a plot twist and a character must disappear. After the story has been finished by everyone, it becomes an art piece. 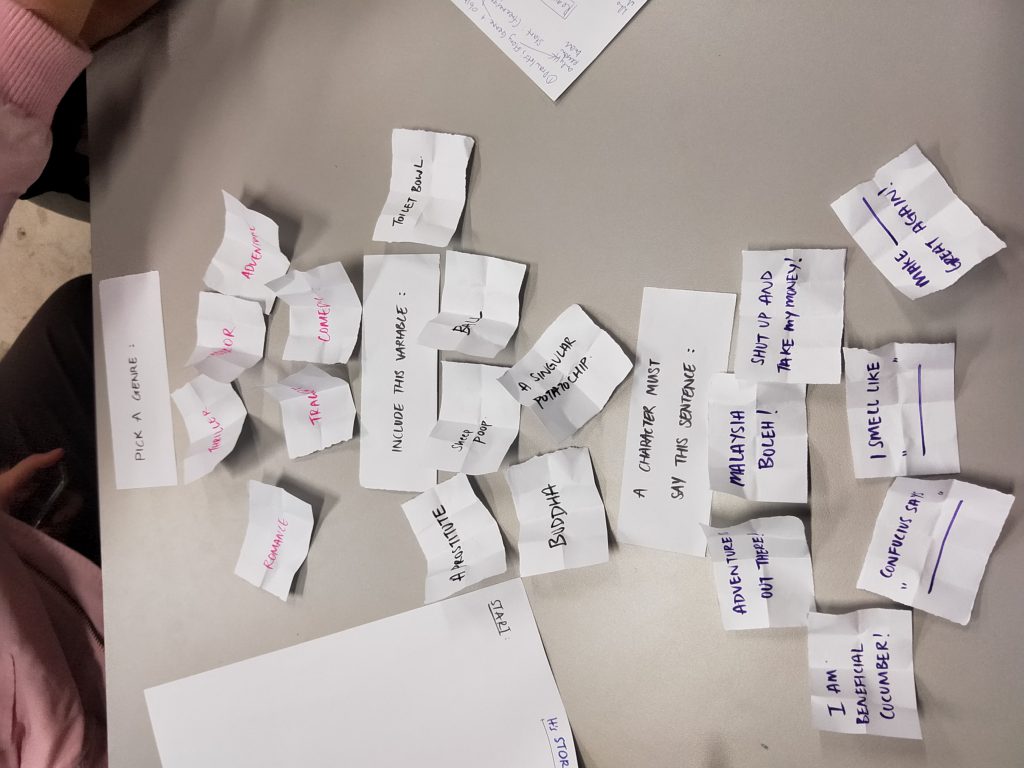 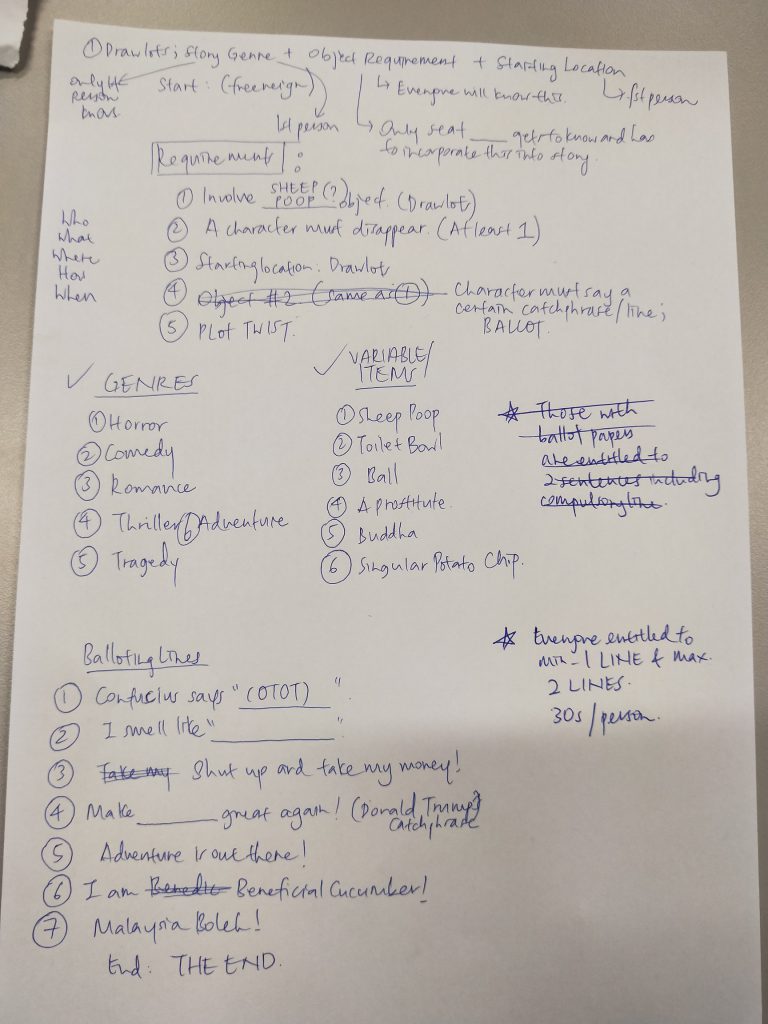 The viewer of this textual art must contribute their interpretation of the story and creativity to complete the story. The artist is only present to provide the boundaries and limitations to guide the story along. It involves social interaction because a co-creator must view other co-creator’s responses to the artwork and how they interpret it before they can build onto it. Essentially, it becomes a collective artwork where artists share different thinking to succeed a shared aim.

At different points of time, people’s perspectives and way of thinking may change, which can affect the flow of the story based on their mood. Also, when people from faraway and different places come together to write the story, it can introduce different elements that we might not have thought of due to the difference in how people are raised in their respective environments.

Our D.I.W.O artwork is a departure from traditional art because instead of how an artwork is pre-planned and personal, our collective artwork provides a collaborative platform which evokes a sense of unpredictability and unplanned creativity. Adding obstacles and requirements also serves to raise its levels and to make it more challenging and controlled to establish a common goal. 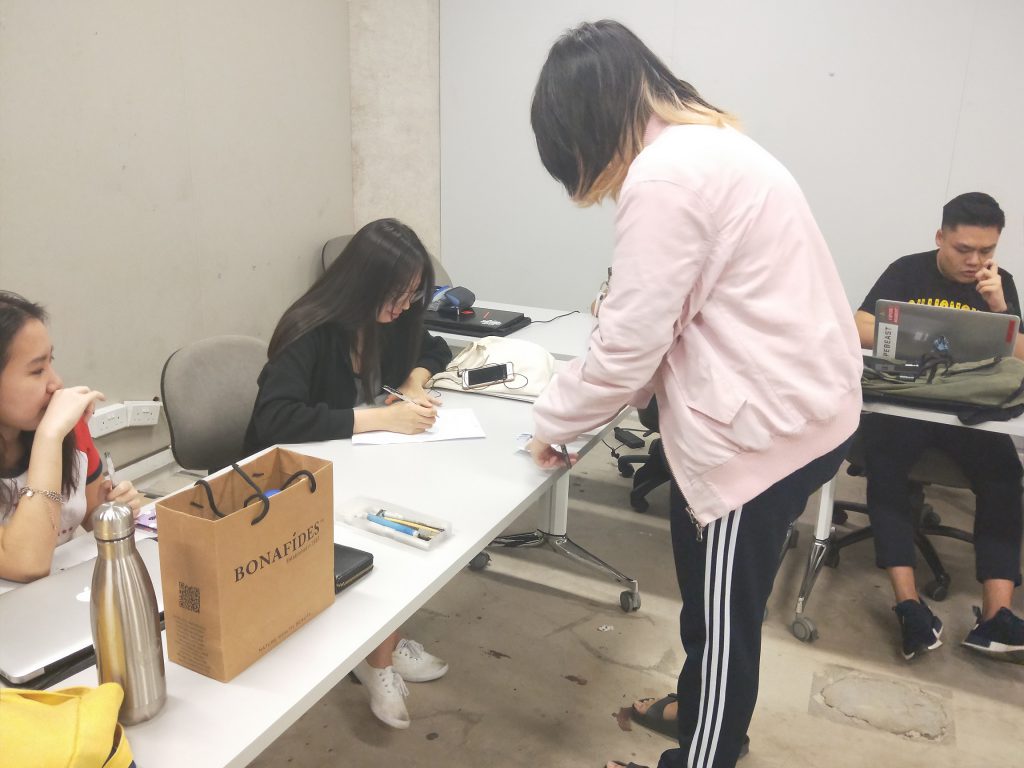 I believe that through D.I.W.O, artists can bond together through social media and collaborations with communities. It also helps people to ‘connect people with other cultures, outside of their own nation states…ideologies.’, as stated by Marc Garrett. This is a departure from traditional artists because they must suffer to maintain a stable finance, threatened by ill-informed perspectives and a rigid infrastructural tie and framework.

Our crowd-sourced time-based artwork is different from the other artworks shown because it incorporates text as a form of art. Also, it is passive, and there are hidden elements that certain co-workers would not know about. This inspires more creativity and difference in portraying the result of the artwork because of how everyone thinks differently.

However, it is also similar to Yoko Ono’s Cut Piece. Each viewer must contribute their part, based on what the others before them has already done. There is a line where you must wait for your turn, and the art piece will not be as effective should everyone contribute simultaneously. The viewers are in full control and are placed in the artist’s shoes. A good comparison would also be the Human Clock, where viewers submit their own image to capture that moment of time. The beauty of the art work is in how a single person’s actions is now obvious and significant in creating the artwork.