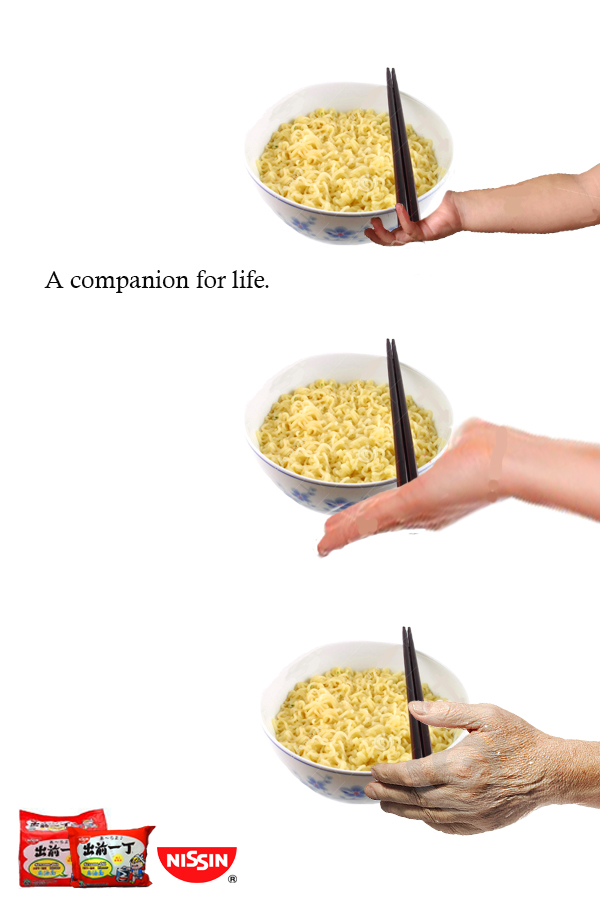 A companion for life by Joey, Project 2 Foundation 4D: Text and Image

In this project, I received a packet of NISSIN Sesame Oil Flavoured Instant Noodles.

Some of the words I identified with this product, as further explored in my previous post, are fast, convenient, tasty, internationally-known and inexpensive. Instant noodles, being tasty and requires so much less effort to prepare, would naturally make one happy because of the lack of energy needed to fill their stomach.

I considered the elements of accessibility, tastiness and how it is easily edible by all ages. I hoped that it represented how it is family-oriented and delicious at the same time, which makes it an ideal and convenient meal for all.

The slogan helped me to explain how instant noodles can be a companion for any ages, and how it can accompany one from the point when he/she is young, to when they are old. It is something that does not grow old regardless of how time has passed.

My advertisement had to be angled towards a large population, hence being open to all ages, genders and races. In other words, it had to be internationally relatable. This ensures that the food is wholly inclusive.

However, walls were hit when matters of ethics were brought up; because instant noodles are unhealthy, and should not be consumed frequently. However, my idea tackles how the instant noodles are so delicious, that you will want to eat it every day without being sick of it.

Additional ideas I could have included included