Here are the different processes for my various typography works. 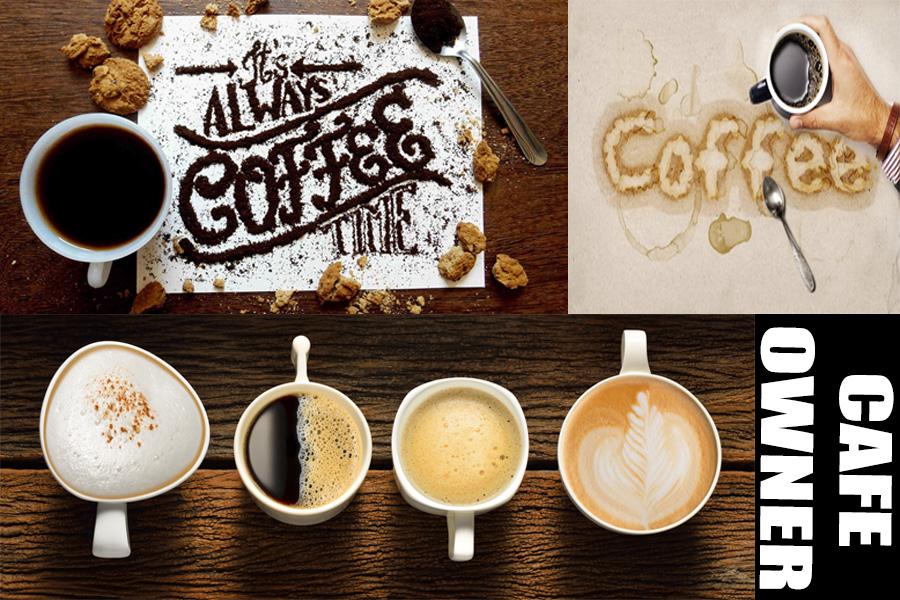 I took inspiration for this typography from how many posters and photos online always feature Flat Lay photography- which makes coffee look really good. The variety of coffee available also inspired me to use different coffees to describe different moods; for me, I like drinking sweet ice-blended drinks when I am happy and I turn to hot mochas when I am feeling quiet. The use of coffee stains also inspired me, because coffee stains have a tendency to stain things whereas keeping its soft and comfortable quality. 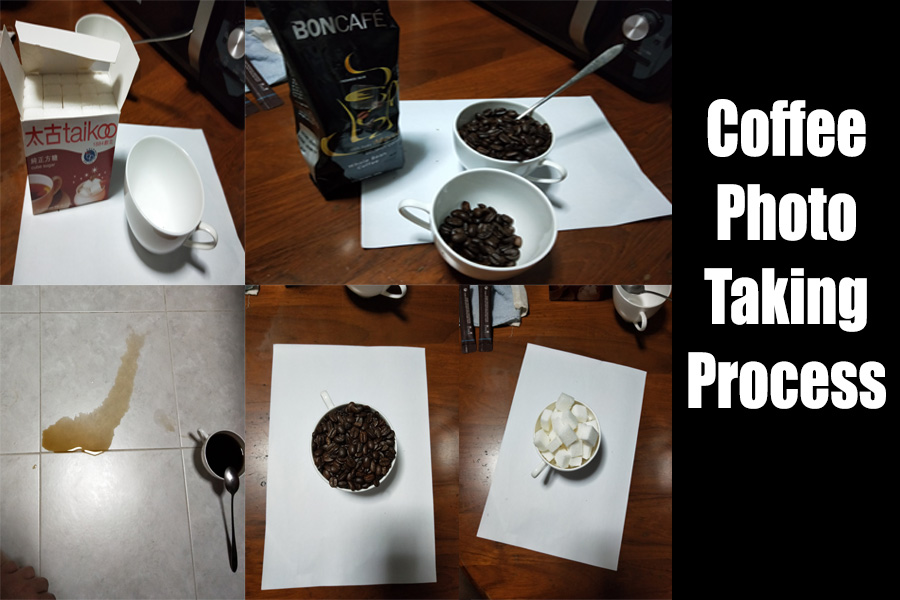 Coffee Photoshoot in my kitchen. T.T

Photoshoot for Coffee was really hard without the right equipment and lighting. I used my Oppo R11 and my regular kitchen light to take the photos. This was also probably the reason why I decided to keep the white background- it was easier to edit for someone as inexperienced as me. Oops.

Initially, I wanted to utilize non-coffee things such as rocks and feathers, but I decided that it would mess up the cohesion of my composition. 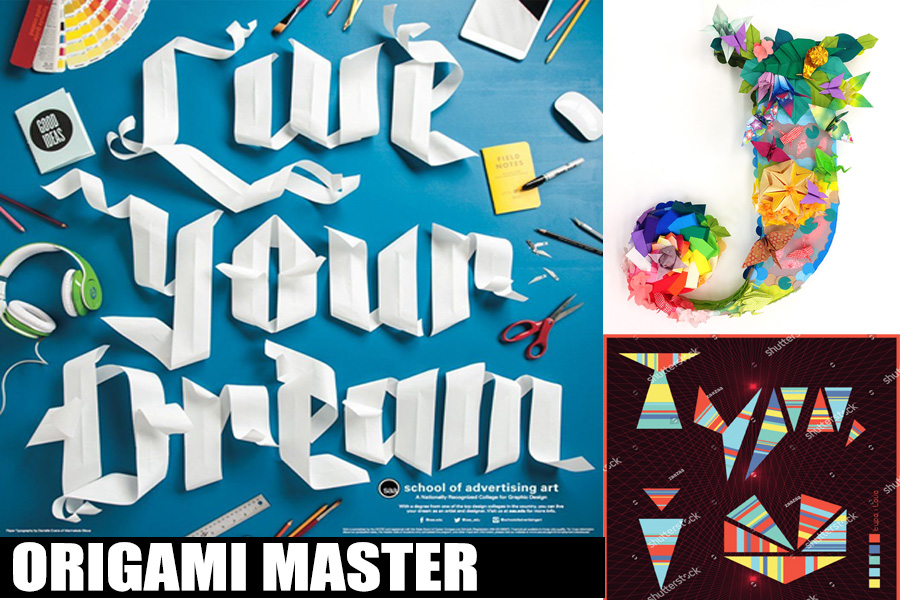 For this occupation, I was inspired by how artists from School of Advertising Art and Japanese Art Festival made use of their own culture to create their art pieces. To be honest, making the origami was really hard, and I had to go through so many drafts that I could cry. 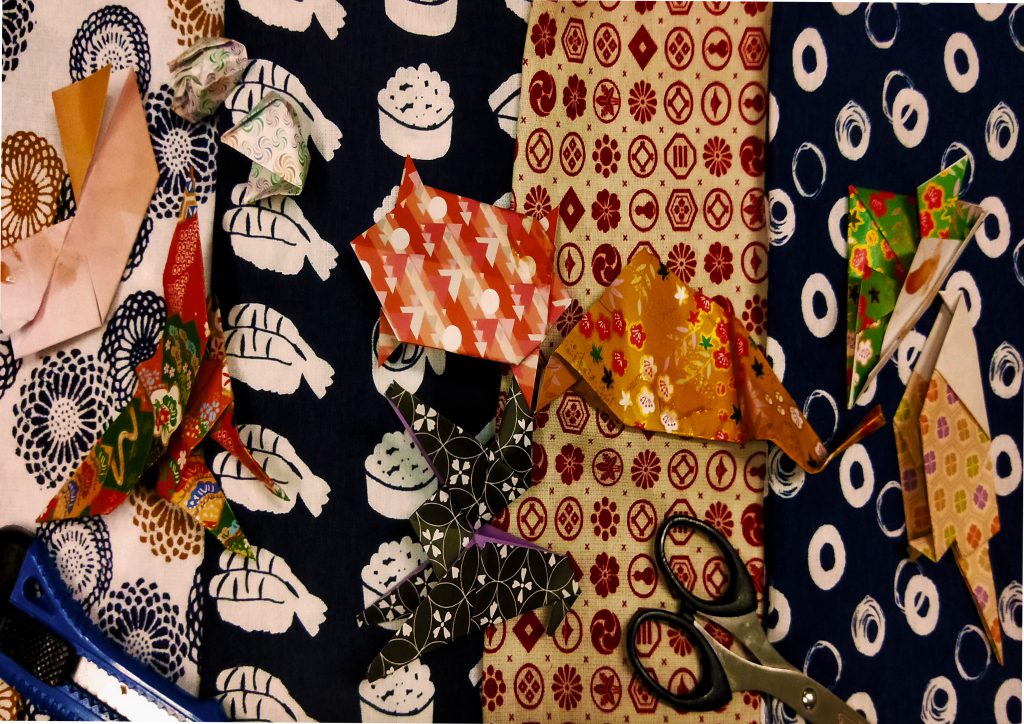 My first draft was a cohesive photo. I made the origami with different kinds of traditional Japanese origami papers, and placed them on traditional Japanese patterned cloths. However, that did not turn out too well because of how the patterns and colours clashed and the Japanese words did not end up being seen.

Then, I changed my approach and decided that I should remake the origamis with more defined shapes, and use a more regular (less patterned) origami paper instead. Also, I should not have photographed all the origami patterns together at once since I did not have the right contrasts and lighting. Hence, I decided to photograph each and every origami piece against a white background, before cropping all of them via photoshop and pasting them together on another blank canvas on photoshop.

For the background, I decided to use one from the internet instead, because I realized that my fabric was indeed too bumpy, and was of the wrong shades of colours to bring out the contrasts in my work.

Then, I spilled sauces against a white paper, and photographed them too. I photoshopped these stains onto the origami, because when I stained the origami directly, the sauces could barely be seen despite being layered on thickly. 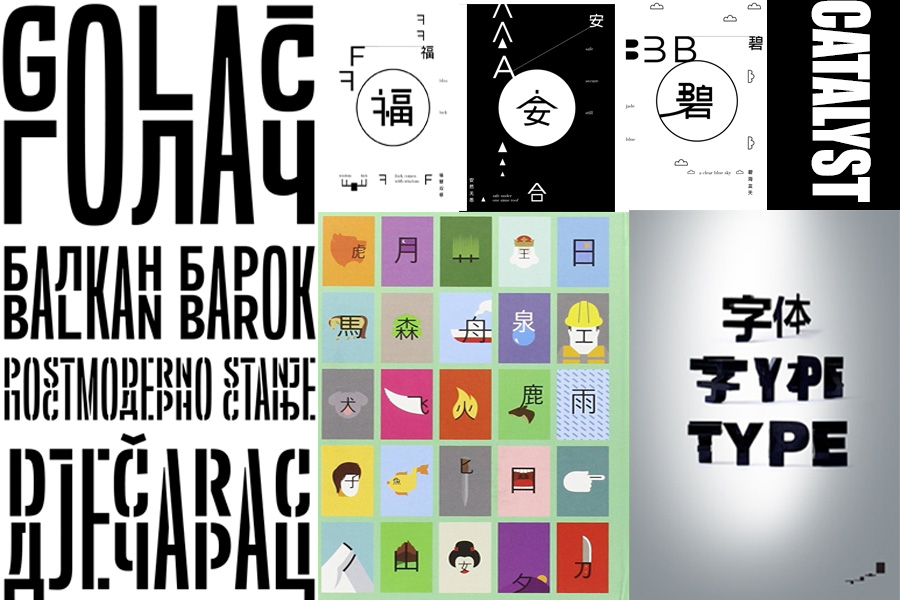 For my work, I took inspiration from works from artists such as ShaoLan, Chinese Ancient Scripts, Balkans Sans Font, and Word Play on Behance. These art pieces and creations rely on the mix of visual graphics and a mix of western and eastern typography to create a new sort of typography. I found it really interesting, and decided to play along with it. 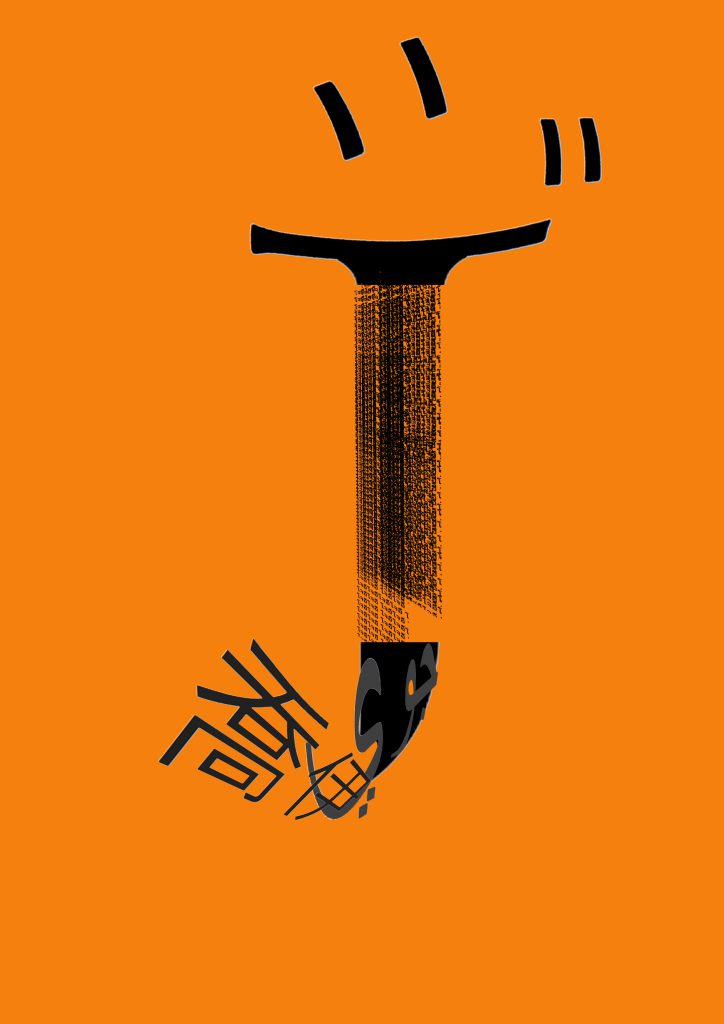 Initially, I tried to play on the idea on how I can alter the J of my name and convert it into an unexpected catalyst by altering the most important component of the letter that makes the alphabet… well, J. However, I realized that I wanted to be aware of what I was doing, hence not really being ‘unexpected’. I didn’t want to be a lunatic after all. And this construction of the illustration did not sit very well with me. Hence, I decided to trash this typography and rework on another one.

Hence, my next idea revolved reworking, reconstructing and re-layering the Chinese direct translation for my name, 喬. I changed the direction of my name at the second half my name to show how a ‘plot twist’ is present, and how I mingled both the eastern and western influences of my name together. 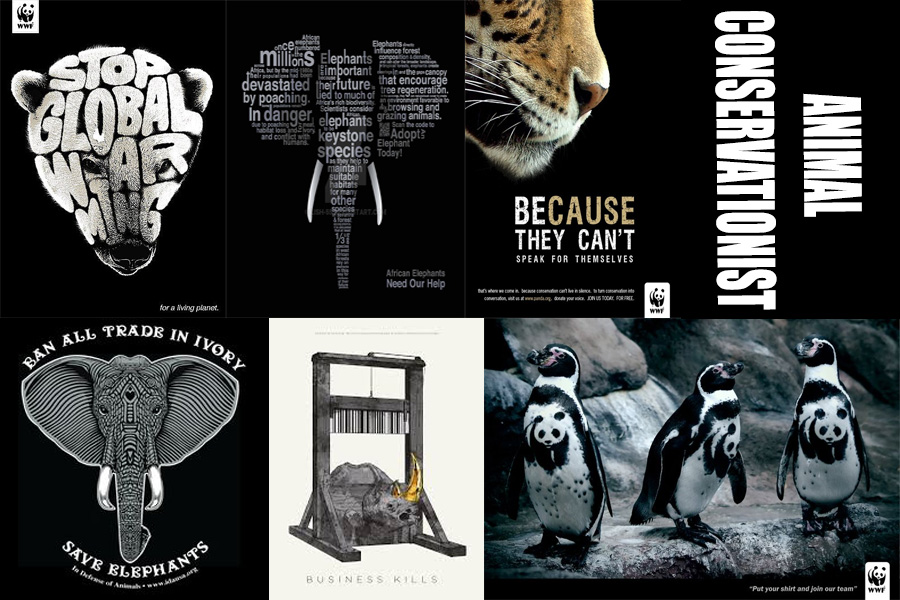 Since I was young, I have always been one to love animals a lot. When I lived at my Grandpa’s house over holiday breaks, I would always play with the strays all around the Kampung (they live in Malaysia) and would occasionally play with the hunting dogs (they hunt in the forests) because they seldom get tender loving care from the hunters. I’m also the kind of person who will go around chasing dogs and cats just to feed them and play with them; these are the animals who do not really get cared for because they do not have owners, and it pains my heart to see them so. When I was 18, I decided to join the SPCA to help out with the Animal Shelter, and am waiting for myself to hit 21 before I join ACRES. In a sense, I’m already part Animal conservationist, and would like to continue on this route especially when I am able to get schooling out of the way (so I have more time to help out in the shelters).

The root of my idea is actually in how animal endangerment and conservation posters often depict sad pictures of deprived animals and how we should help them, but rarely about what is the cause of their sadness. Maybe these conservation posters are afraid of corporate backlash when they throw out the causes of animal endangerment in their posters, but I feel that the impact is lessened when they do not remind people about how these animals are being mistreated and harmed in the first place. All sad animal posters do is to evoke feelings of pity in people, but rarely the feelings of ‘oh shit, we did this and caused this? Oh shit.’. Hence, I placed these causes in my typography poster, in an attempt to spread the message about how animal endangerment has come about- due to human consumerism and ideals. 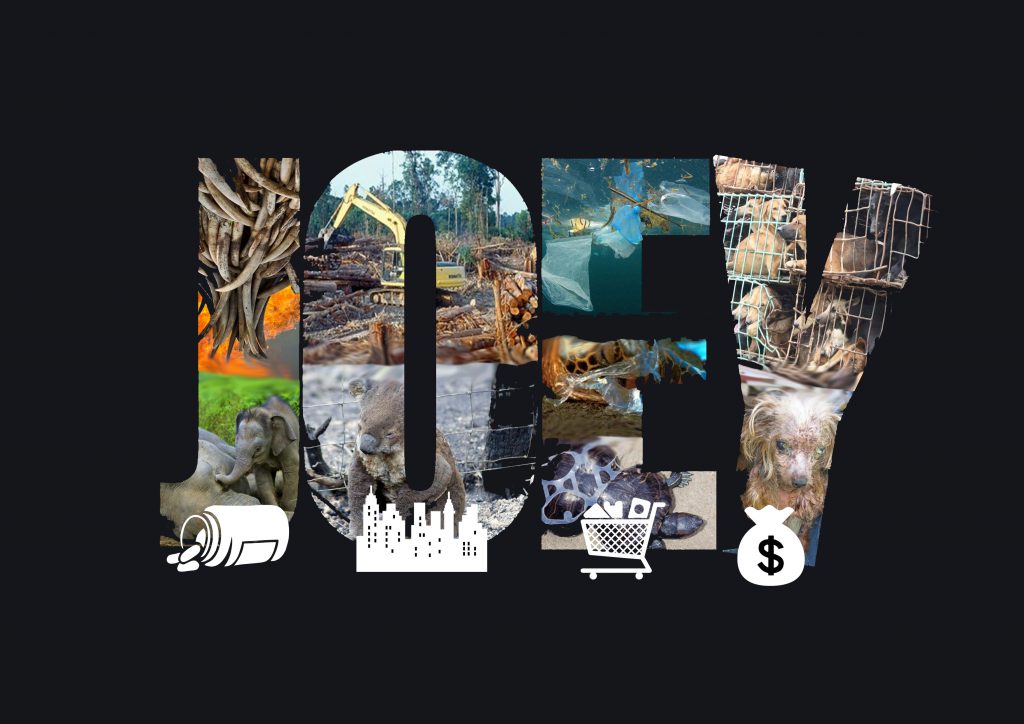 My first draft was a collage of real animal endangerment, their causes and their consequences. However, it was messy and a little too direct. 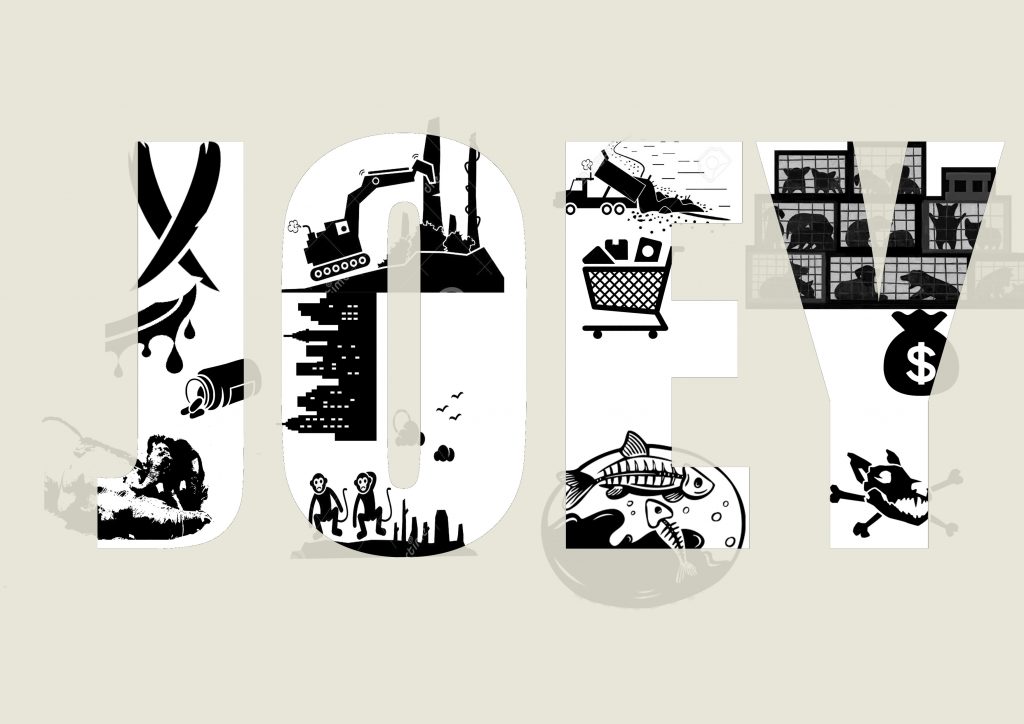 Afterwards, I decided to go for a black and white collage, focusing on mingling elements of the original pictures with the background to establish a sort of Gestalt and black and white quality. 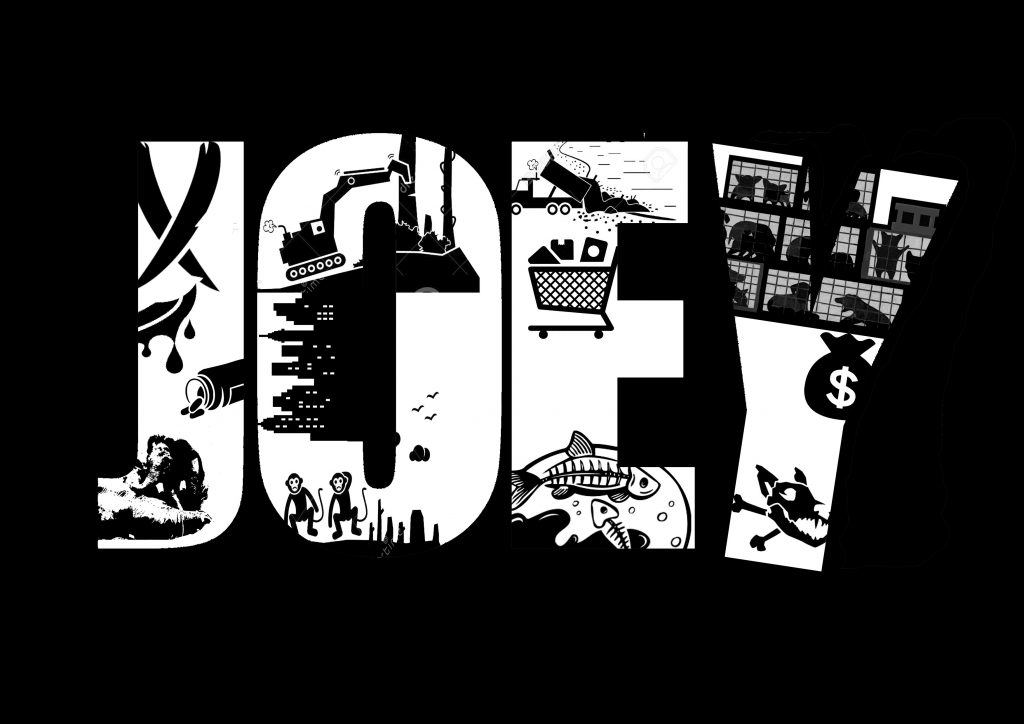 And bam, the final product!