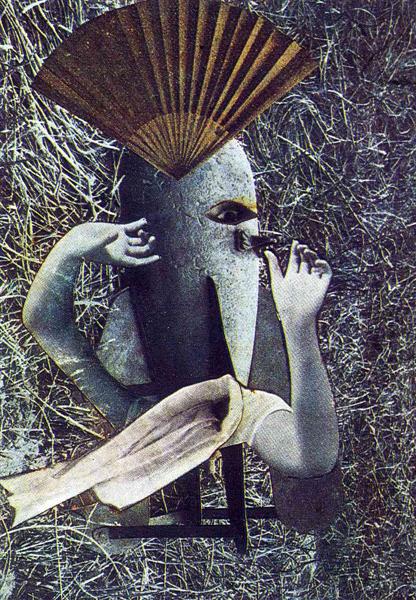 Artwork description & Analysis: Ernst’s use of photomontage was less political and more poetic than those of other German Dadaists, creating images based on random associations of juxtaposed images. He described his technique as the “systematic exploitation of the chance or artificially provoked confrontation of two or more mutually alien realities on an obviously inappropriate level – and the poetic spark that jumps across when these realities approach each other”.
https://www.theartstory.org/movement-dada-artworks.htm#pnt_1

One of my favourite pieces is The Chinese Nightingale (1920) by Max Ernst. It features a combination of war machinery merging with human limbs and other accessories to create weird hybrid creatures. In this case, it has the arms and fan of an oriental dancer acting as the limbs and headdress of a creature whose body is an English bomb. For Ernest who was injured by the recoil of a gun in war, it created a fear generated by weaponry combined with benign elements and often lyrical titles for him. To be afraid of a manmade war weapon was common during the DADA revolution times because of war. Hence, to repel this fear and revolt against the constant violence, a mockery is made out of this scary subject.

To me, it is brave for Ernst to combine something so gentle, aesthetic and feminine into a brutal war machine. It is also not typical to attempt creating a disharmony in works in that era. As a result, I salute Ernst for breaking out of the conventional art creations to establish such a stark contrast in his works, as well as his attempts to convey social commentary about the fear of war during that time period.