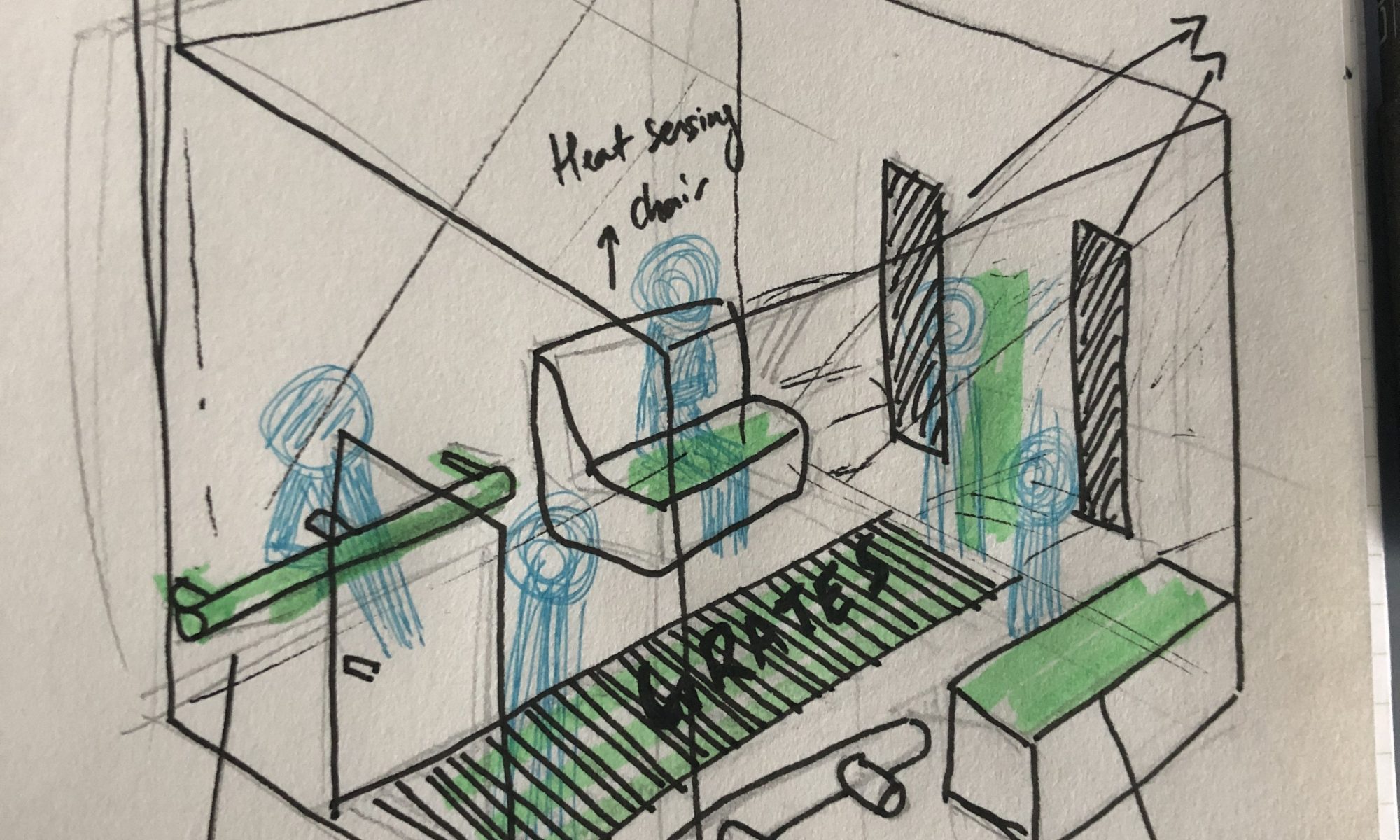 I am afraid of IM room at night as it is usually too dark, nobody comes here, and the lights are behind the door when we open it. With that in mind, I was wondering what makes us scared or creeped out in a space. After some research, I found a few points:

The spookiness of a space is associated with physical properties which we evaluate and make psychological connections to an unknown threat.

I feel that fear is a very interesting way to evoke a sense of body as it plays with people’s imagination in filling up the spaces of the lack of a physical presence. Can fear or creepiness transform a familiar space into an ‘unsafe’ space? Can we feel unsafe in a safe space?

From an article by theatlantic.com, I found this quote:

I’ve seen the process thousands of times from behind the walls in ScareHouse—someone screams and jumps and then immediately starts laughing and smiling. It’s amazing to observe. I’m really interested to see where our boundaries are in terms of when and how we really know or feel we’re safe. – Allegra Ringo

I thought this is an interesting observation. What makes someone feel safely scared? Perhaps it is the knowledge that the threat is unable to harm them. I want to let people willingly enter and stay in a space that makes them feel uncomfortable so as to make them reflect about their view of the space they are in versus the creepiness I designed for them, juggling between what they think is real and what they think is fake. There are a few considerations to start with. How big of negative (or positive) space would we decide that a space is spooky? How dark or bright would it be? How isolated is it? How rundown is it? What objects are placed within it? What materials are used in the construction of the space? What are the associations to such spaces? What are our cultural beliefs?

These are just some questions to ask. But these are not applicable to what I want to do now as I will be using a familiar space in school (the lounge). But I spent a long time thinking about these before finalising my concept so let me just let those questions stay here? Haha

What is the relationship between people and a sense of ‘presence’ in a space? Using a ‘spooky’ setup in a room that visitors are familiar with, I wish to (or at least attempt to) create dissonance between their idea of the space and the space itself to bring about the question. 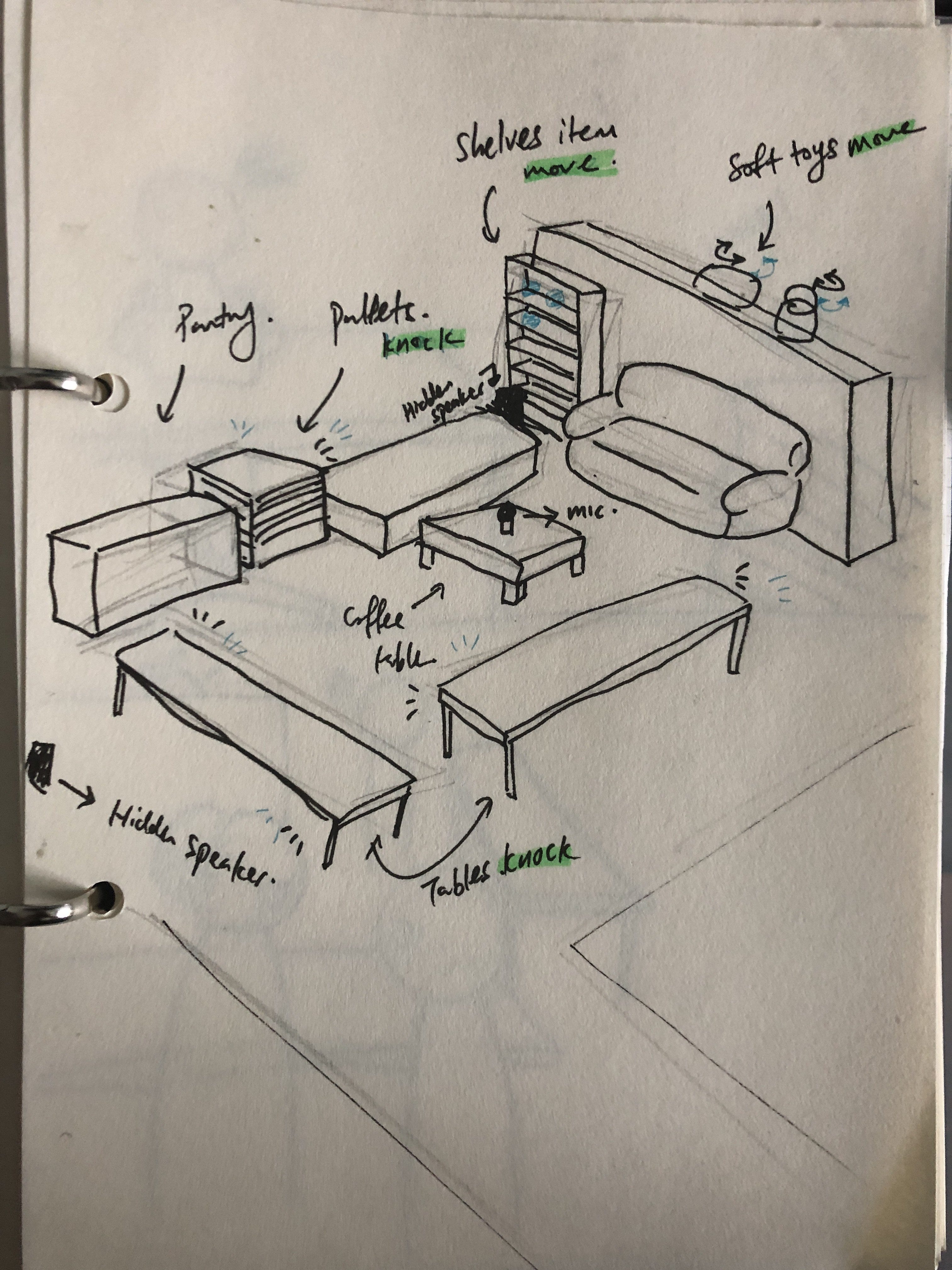 Note: I’d like to credit The Lapse Project by Inter-mission for the idea of a sound lapse 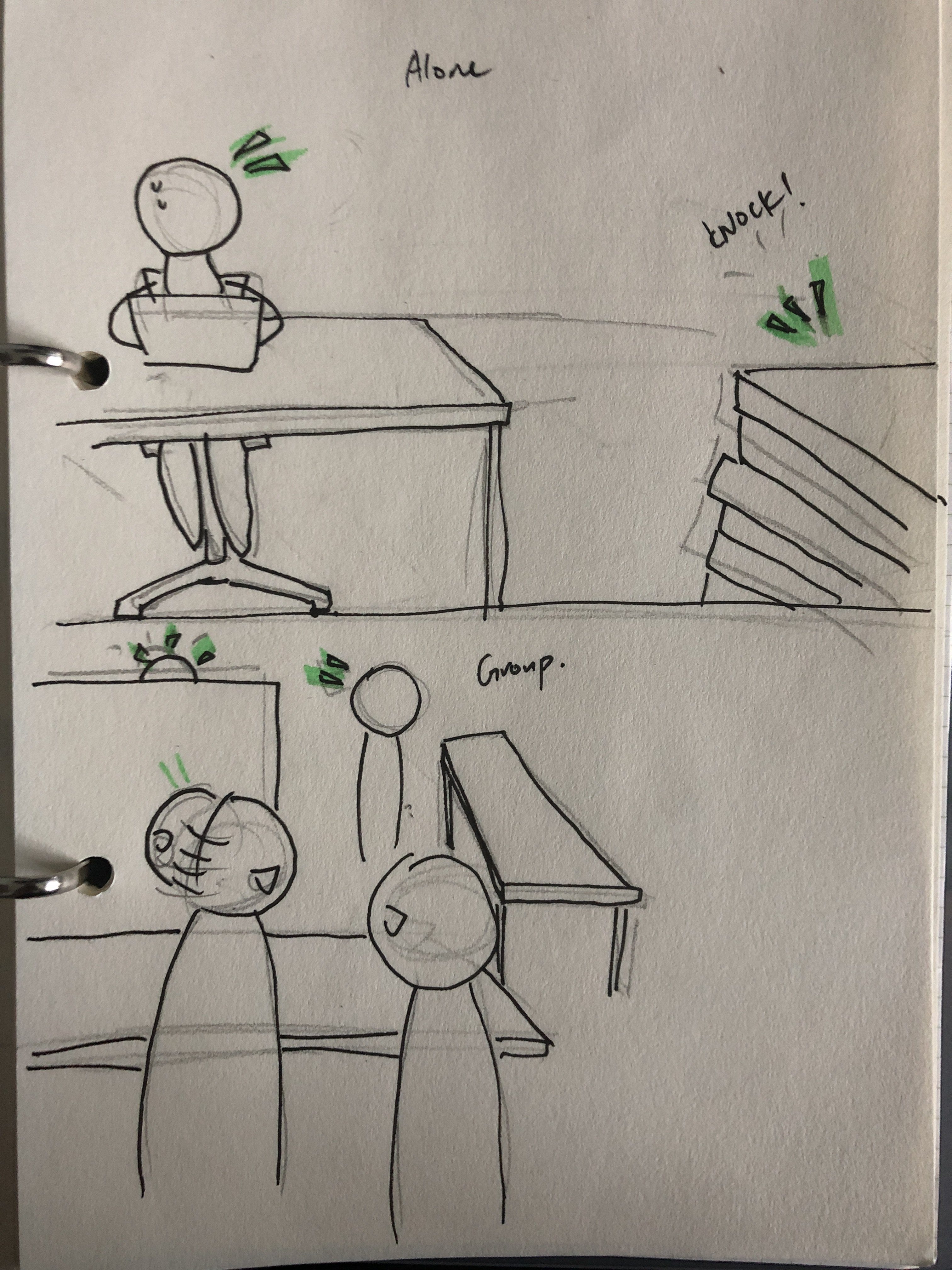 Overall, it could be packaged as a challenge, although I try to not turn it into a social experiment. I want people to be aware of the intentions of the project and have fun within an interactive space, while also confront the idea of being spooked.

Looking back, perhaps the morning experience can be more active as visitors can affect the outcome of what happens at night with their recordings. This ensures that visitors of the lounge all have a participatory role no matter when they enter the space.

Wrapping it up… (basically summarising what I written above)

Imagine a space that everyone is familiar with: The ADM Lounge. The interactive space will be set up there, and visitors of the lounge will know that there is an installation going on in that location. A speaker will be hidden around the lounge to playback live recordings set to play at a 12 hour delay, so at 3am, recordings from 3pm will be played. A mic would be out in the open, recording everything going through so visitors can voluntarily contribute to the recording. Groups gathering at the lounge making conversations will also be recorded. Some spots at lounge will also have sensors that, once triggered, plays a soft haunting sound, or causes a knock on the wooden pallets, or rotates/moves a soft toy. This will have little effect in the day, so visitors in the day have a more contributing role to the installation in terms of how they create the haunting experience for people using the space at night. At night, the installation comes to be fully alive as ADM quieten down. The soft playback will be audible and the lounge will be filled with softened chatter from 12 hours ago. This creates the presence of people when there is nobody, creating a sense of an unknown entity wandering around the space. Sensors that get activated amplify this effect by creating more audible and tangible experiences for visitors. Overall, visitors should be aware of the entire setup so they are able to think about whether the setup affects them or not. They should be able to evaluate their feelings and responses, and gain some insights about how these sounds and movements affected their experience in a space.

IDEA 2: What We Left Behind

Before I begin with this concept, I’d like to thank Shah and Tanya for starting a conversation about our ideas which led me to thinking about this idea. It is sort of an idea built upon their’s but in a different direction so THANK UUUUUU

We are always leaving things behind, whether we are aware of it or not. Our hair, our marks on metal or glass, our smell, our footprints. We don’t often notice them, but when it gets accumulated, it becomes acknowledgeable. It is through these accumulations that we can feel a presence of people that entered and left. However, that is also when we decide to remove these marks. Sweeping away the debris we leave behind. Wiping away the marks. Doing so, we erase what we left behind over time, only for it to accumulate again. Out of sight, out of mind.

With this analogy, I would like to raise an awareness of what we produce as humans, in terms of the waste we leave behind like plastic, unfinished food, or garbage.

Singaporeans produce an average of 800g of waste per day. That’s about the weight of 5 iPhones. Multiply that by the 5.6 million people in our population, that is a lot of waste. With this piece, I aim to bring awareness to our wastage and also offer solutions to help the situation. 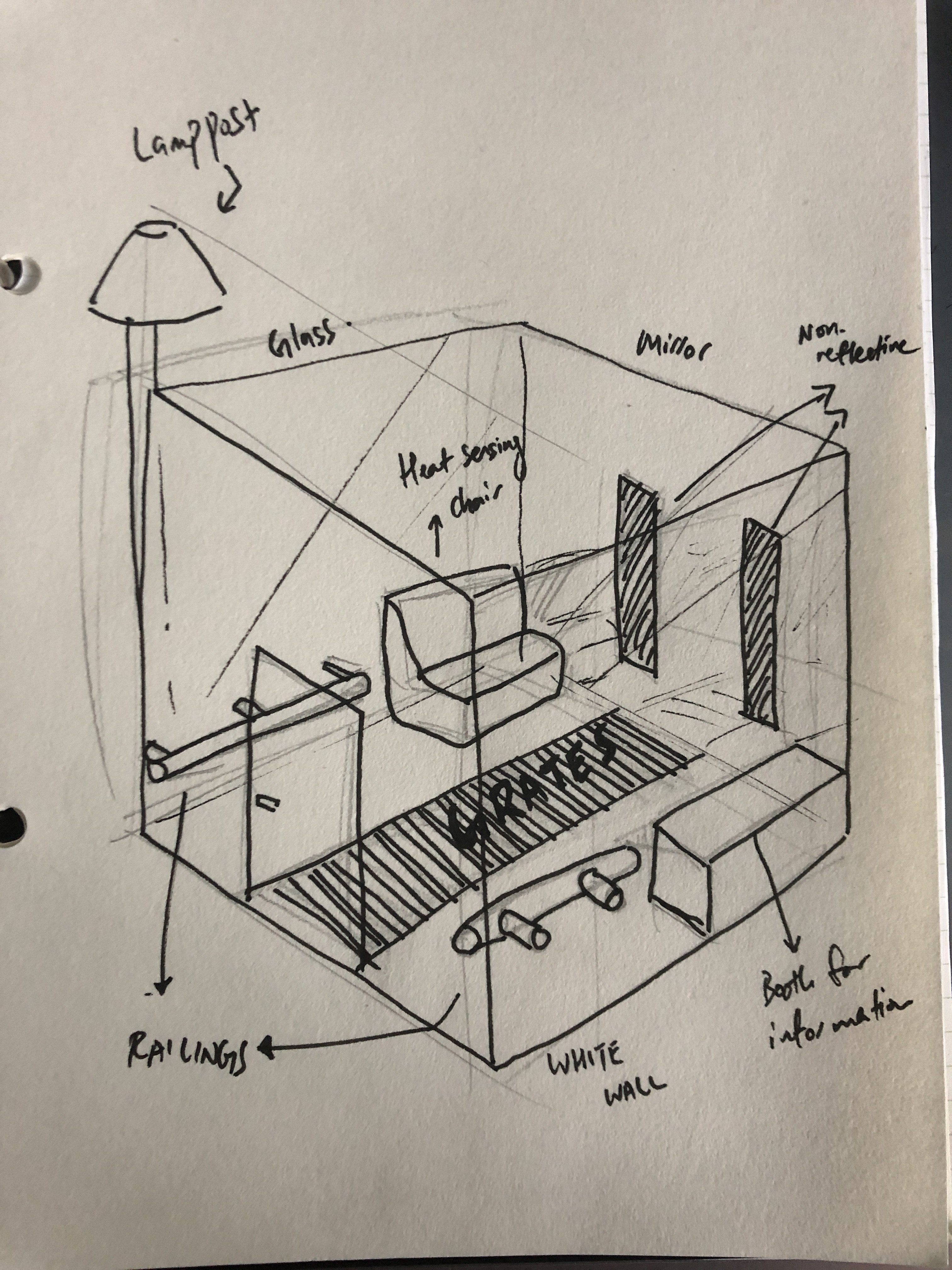 The installation is going to be placed within the CBD area. This is a 3m x 3m cube that is white in colour in the interior. There are mirrors, glass panels, and metal railings inside the space. There are also grates on the floor that collects the hair and objects left behind by individuals. 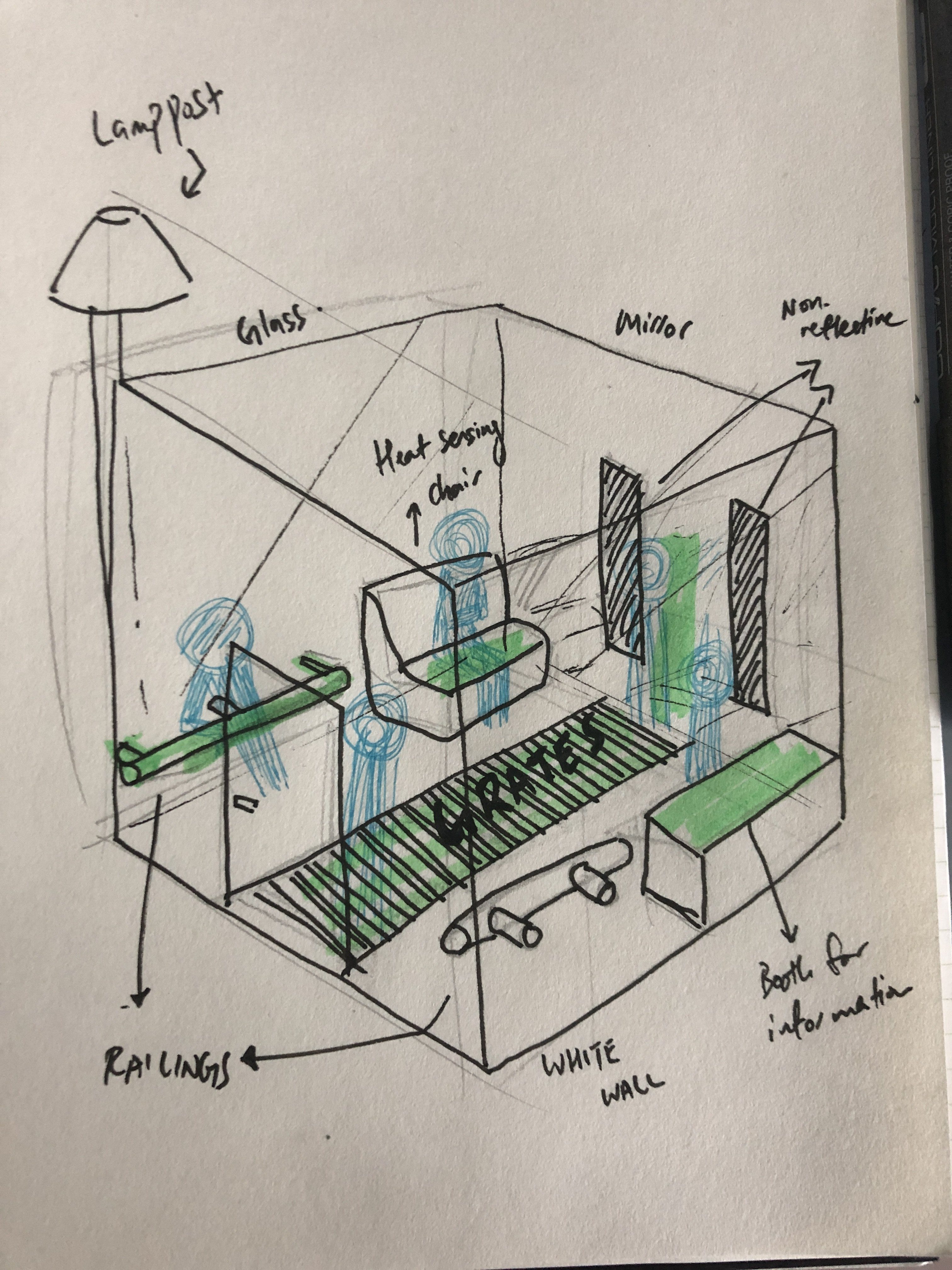 People entering and leaving will leave behind their odours, firstly. They will be able to explore the space and look around. This can be a space for people to rest in as well. The main attraction is the gutter — it is going to eventually collect enough debris to be very noticeable. There are also panels to help people make the connection between the left-overs and waste. At the every morning, the remaining residues will be swept into the gutter.

Within the space itself, there are also objects to interact with. One can lean on the railing, take a seat on a few of the designated seats that is coated in heat-sensitive paint. Eventually, footprints and damage will also appear inside the room. All these will evoke a sense of presence within a space. As the work progresses, it will be interesting to see how people leave their marks, where they leave them, and perhaps this can create a persona for Singaporeans using an urban space which can help in urban design.

Just for a reference, here is how the space can be artistic and functional which is what I’m going for

I also wanted to further link this idea with the idea of birds and migratory birds dying while in transit in Singapore because they wander into glass-filled urban spaces which disorients them. One very good example is the ADM building itself and the amount of dead birds we can find around ADM. This seems to be a problem that we ignore, or literally sweep away (thanks to the cleaners that clean our city every morning, which is also why I want the space to be cleaned in the morning). Mr. David Tan is one person that collects these dead bird samples to understand where birds are dying and what kind of birds they are. (https://www.todayonline.com/dead-birds-wingman) I feel that our impact on other animals as humans can be a topic to discuss in the same space too. But I was afraid if that will make the entire concept too complicated, that’s why I want to write that here. I think bringing awareness to the amount of bird deaths is not the only thing we can do. We can teach the world what we can do to help this situation. Within the installation, there can be non reflective stickers on the mirrors to block the view of people looking into the mirror, as like how it would work for birds in real life to re-orientate themselves. We can put railings for people to lean on which works like perches for birds to safely rest on. We can create a low-light environment to hint at a way of lowering light pollution.

One solution that is already in place is the addition of non-reflective strips on glass windows.

Why is this in the front of ADM when it could be placed in the Sunken Plaza where most birds died in?

Anyway, I was thinking, the artwork can have a plug to help Mr. David Tan in his research by providing the visitors with his contacts.

The experience in this space should be mostly passive but also informative. The entire concept revolves around human waste in terms of our bodies’ sheddings. It serves as an analogy for the physical wastes we created that we sweep out of our existence everyday. To quantify the damage we do to the world. It also serves as an analogy for the wildlife that we indirectly killed as they wander into our urban spaces. Overall, visitors should be able to take away certain messages about awareness and perhaps some information of how they can help.