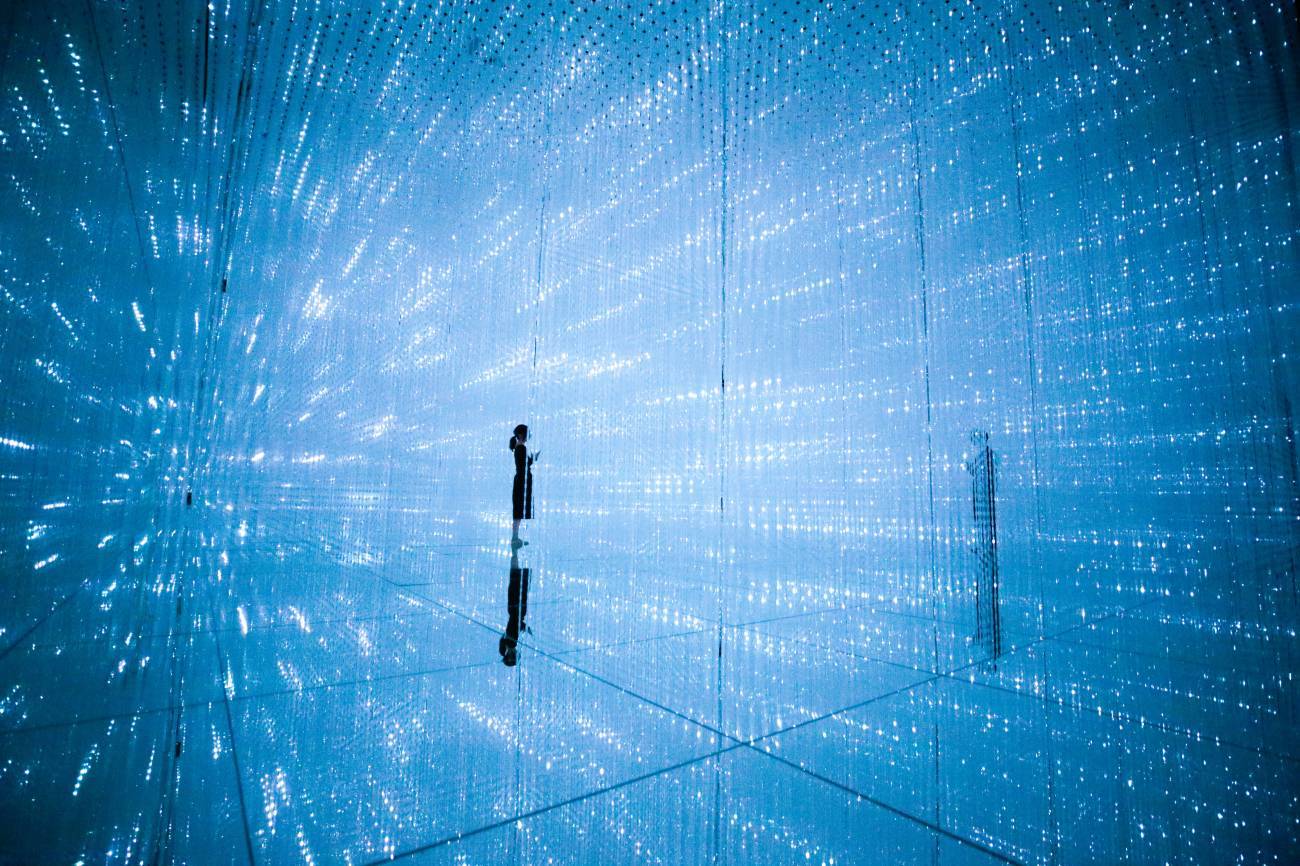 The artist I am choosing is teamLab.

teamLab is a Japanese collective, interdisciplinary group that uses digital media as their playground for art-making through the use of augmented reality, interactive spaces, and various technologies.  Calling themselves ‘ultra-technologists,’ teamLab aims to achieve a balance between art, science, technology and creativity.

teamLab was founded in 2001, a company that did not made it in art, but instead made applications, back-end systems, web design, interfaces, and data bases. They became major after the Singapore Bienalle 2013 which they were given a special showcase in Singapore Art Museum. The Bienalle drew a total of 560,000 visitors, and the success of the event made teamLab go international. teamLab founder Toshiyuki Inoko, Takashi Kudo, teamLab’s Communications Director and one of the first members of the collective. teamLab is now an internationally known brand which has about 500 staffs in Tokyo, as well as small offices in Singapore, New York, and Los Angeles. teamLab also have 4 permanent exhibitions in Singapore, Future World: Where Art Meets Science at the ArtScience Museum, Story of The Forest at The National Museum, Digital Light Canvas at Marina Bay Sands’ former skating rink and Flowers and People – Dark at the National Gallery.

With works like ‘The Infinite Crystal Universe,’ ‘Walk, Walk, Walk: Search, Deviate, Reunite,‘  ‘Sketch Aquarium,’ teamLab created immersive and interactive worlds full of colours and imagination. teamLab not only engages audiences with beautiful worlds, but also allow them to interact with it by adding their own part to the artwork (as seen in Sketch Aquarium).

When asked about the considerations put into the production of a teamLab work, the response was:

Interactive artworks encourage viewer participation. Common interactive media, such as video games, PCs, smartphones, Internet applications, and the like, involve people who purposely wish to interact directly with the world, actually intervening and executing some functions in order to do so. However, teamLab focuses much more on connecting interactivity and art, regardless of whether the viewer purposely wishes to intervene and execute some actions, so that art is changed simply by the mere existence of another person. In addition, if the change caused by the existence of that third person looks beautiful, then the existence of that person also becomes beautiful.

At the very least, with the conventional type of art that people have experienced up until now, the presence of other viewers constituted more of a hindrance than anything else. If you found yourself alone at an exhibition, you would consider yourself to be very lucky. However, teamLab’s exhibitions are different: the existence of other viewers is definitely seen as a positive element.

According to one online article, chief creative officer Takumi Nomoto said this:

“It’s about creating something that’s against what people see as the norm,” Nomoto says, smiling. “If I go to a museum and I see art hanging on the wall I don’t feel any connection to it, it’s just a painting on the wall. However, if you’re part of the art, if you play an integral part, then you can connect with it.”

teamLab’s philosophy is essentially creating non-static interactive artwork that one can relate to, and that generates the feedback loop which is crucial for the artworks to stay alive. The futuristic visions of teamLab allows for such a playful yet awe-inspiring works. I find this philosophy really interesting and something that I would love to do. Being able to meddle with technology to extend one’s perception of the world is one thing that is great. To be able to inspire people with the creation of universes is another experience that cannot be put into words.

For a software programming company to transition into an art-making one, their approach to design is really candid, enthusiastic, and really different from trained artists which I feel made them really lovable and genuine in the way they make art. When art and science comes together, it becomes something without boundaries. When we start seeing science as art, and throw away preconceived ideas of what art should be, we can really appreciate this new ways we perceive art. Just like Nam June Paik’s ‘Magnet TV,’ teamLab can be revolutionary in our time to create a more hopeful future for not just the art world, but also for reality.