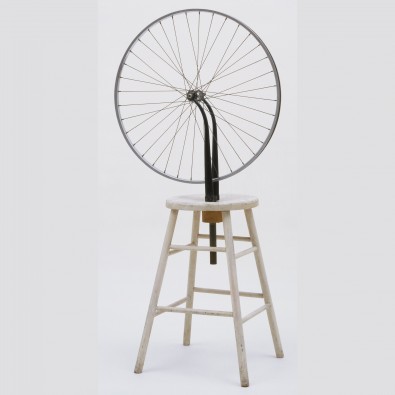 My favourite art movement would be Dadaism. There really isn’t any visual favouritism that I have to this particular art movement unlike the possibilities you could have to other art movements. Maybe the love for real/false perspectives to Cubism or the robotic senses of Futurism. My favouritism towards Dada, was unlike its art intentions-  rational in its foundation. As an art student, I had always found that Dada artworks were so nonsensical that it was much easier to write about for SOVA (Study of Visual Arts) exams, hence, tilting towards them.

This work by Duchamp is called Bicycle Wheel. It is a found ready-made created by Duchamp when he merged a bicycle wheel with a stool. Essentially, this is a visual amalgam of polarities at its finest. The function of the wheel is negated as a found object when the wheel is placed facing up, hence it cannot move as a bicycle wheel. The function of the stool is negated as a found object as the area where your buttocks are supposed to be are cramped in with a bicycle wheel, hence it cannot be sat on as a stool.  Duchamp creates a “new” creature of the arts, with its new intended purpose to be a fine art display. It can neither be sat on or wheeled around.

The idea of polarity comes in with various points. The dynamism of the wheel rotating at its axis, while the stool remains rigid and sturdy, supporting the moving wheel. Despite all of its movement, this “creature” cannot act on its energy because of its visual paradox of movement. Another contrasting point would be the mechanisation of the bicycle, using basic machinery functions to carry out specifications, which is supported again, by the wooden stool hand-crafted to look banal and not move. This element of movement, combined with the bestial visuals (big head and four tiny legs), creates a new identity, torn from unwanted materials. The visual difference of intricacies are obvious when you compare the wheel and the chair. The kinetic energy of the wheel are almost transferred to the chair like a lightning rod off-shooting into its four legs.

But jokes aside, Dadaism does propagate themes that the inner anarchist in me appreciates. In a time where art is pompous and diluted, Duchamp and friends find ways to source out new visual anthems, using unwanted materials with intended functions and repurposing them altogether. Artworks like “The Fountain” or “Bicycle Wheel” represents so much more than their physicality, they are as mentioned, “anthems” that represent a new found idea for society, casting aside the rich and snotty and appreciating art as intellectual curiosity. 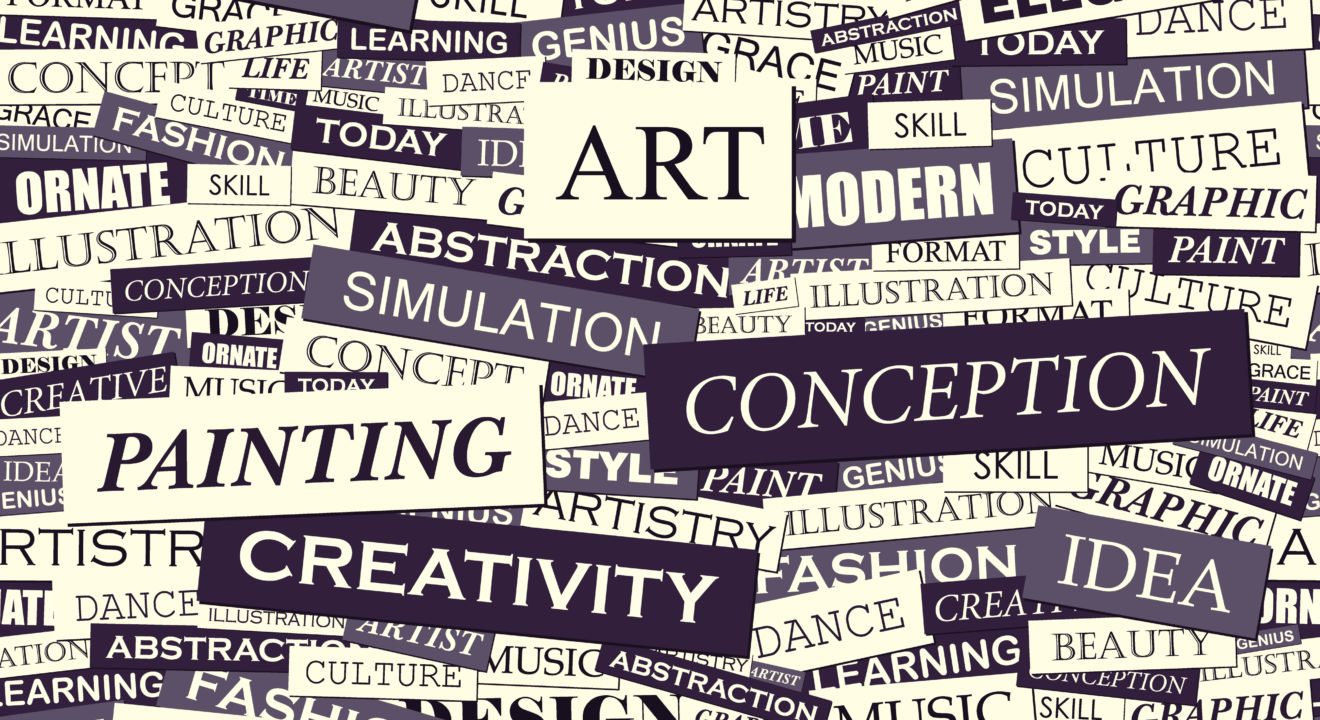 I do not think that anybody should worry about being timeless but rather be concerned about doing the job at hand. -Page 44

The idea of being timeless is interesting as the term “canon” was loosely thrown in during one of my art history modules. “Canon” refers to an art piece that stands representative of achieving absolute effect in an entire generation of art makers, having an implicit timeless quality to it. For example, Duchamp’s Fountain or Picasso’s Guernica.

In the later pages, it is mentioned that there “has been a betrayal of Modern in the form of endless rationalisations about decoration, coupled with complaints about the coldness of Modern design” I find this quote itself tinted with probable faults/betrayal apart from the one aforementioned. In the short yet educational weeks placed under Lisa, we have learnt many traits of different art movements. And with that, terms like “decoration” and “rationalisation” and “coldness” themselves are intuitive for many opposing art movements. Art deco loved decoration and yet Constructivism hated it. Dada hated rationalisation yet the Impressionists revered it. Futurists loved the coldness of visuals yet performance artists loved the sensual and dynamism of human mediums.

Hence, we realise that there is this apparent paradox in art. Timelessness itself reveals the chance of betrayal, where we flip from one side of the coin to another. One visual trait we possess can be abandoned within the next decade. It is empowering to follow the quote, where we should finalise our works according to contemporary issues, instead of worrying if our artworks fit the bill of our contemporary cookie cutter. 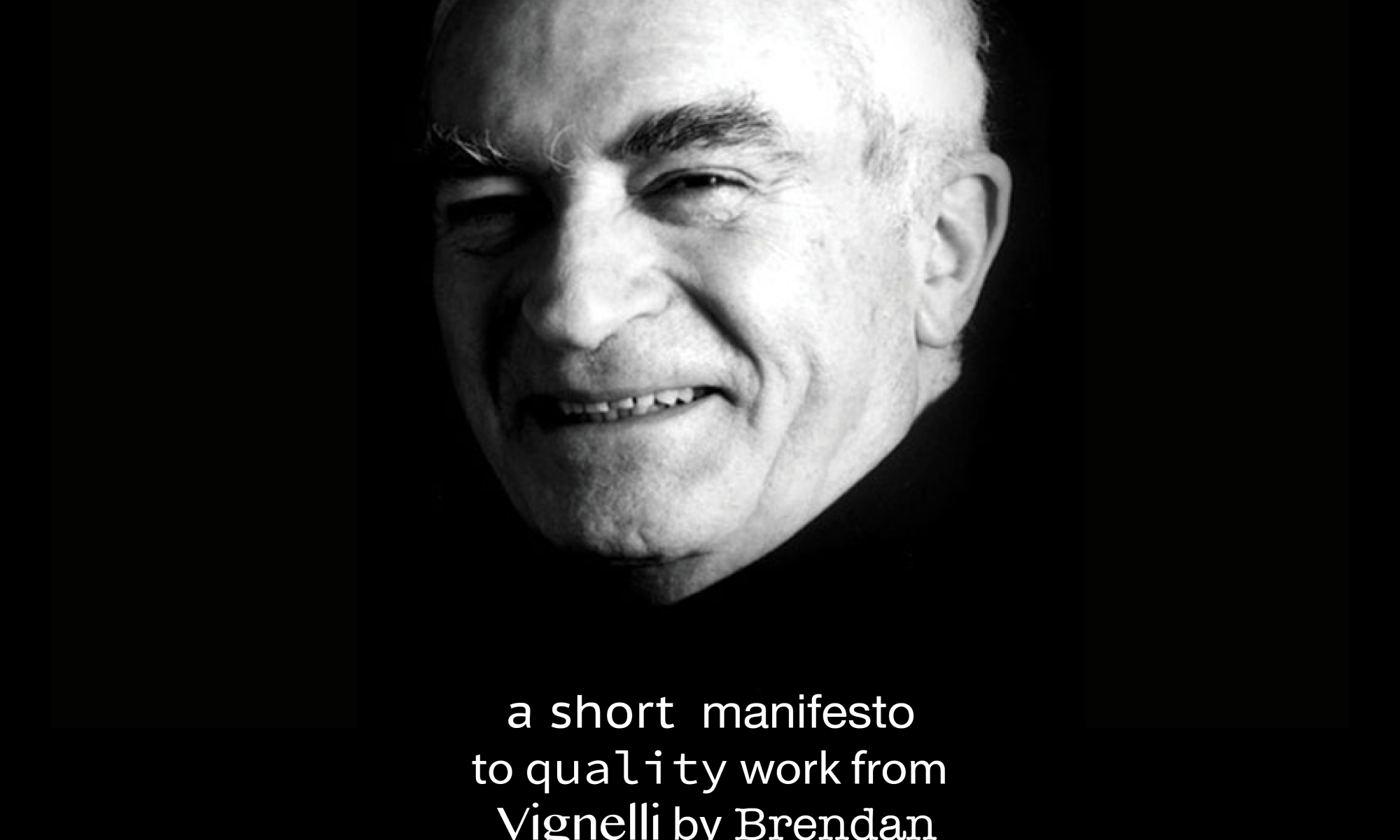 Reading the interview of Massimo Vignelli was particularly inspiring as the recent contemporary art modules I have had have been revolving around the values of contemporary artists and their relationship with their target audience.

Back tracking to the progressions of art movements introduced to us, we are able to magnify and zoom out for greater details since the chapter of art history has already been signed off. I find it interesting how this particular quote in the featured article by Vignelli  lists down four essential traits to have that defines a quality work. These four qualities somehow have a representation and notion of time and space to its definition, be it intentional or not.

a short manifesto to quality work from Vignelli by Brendan

Quality begins with the sprout of passion, such as that of Dadaism. It is the spirit of anarchism towards cultural, social and political boundaries that triggers the rigid and pushes the poets. It is only with the initial passion to push an idea that creates art movements.

Curiosity follows this procedure as passion runs out and free spirited expression needs to offshoot into more intellectual/intended practices. This is evident in Picasso’s exploration into different variations of Abstraction and Cubism: Analytic and Synthetic Cubism. Curiosity drives the artist to explore into different techniques and methods, eventually finding their inner mojo.

Intensity is a hard word to define, but probably refers to the extent to which an artist attempts to defend their value and visuals. In examples like Rodchenko and Duchamp, the ludicrous quality of their artworks are adventurous for some, but can be hilarious to those who do not understand them. The intensity to which they wish to portray their works will affect the visual aesthetic and believability.

Lastly leaves professionalism, a stage where people will take whatever you give them because you’re a professional artist. 🙂 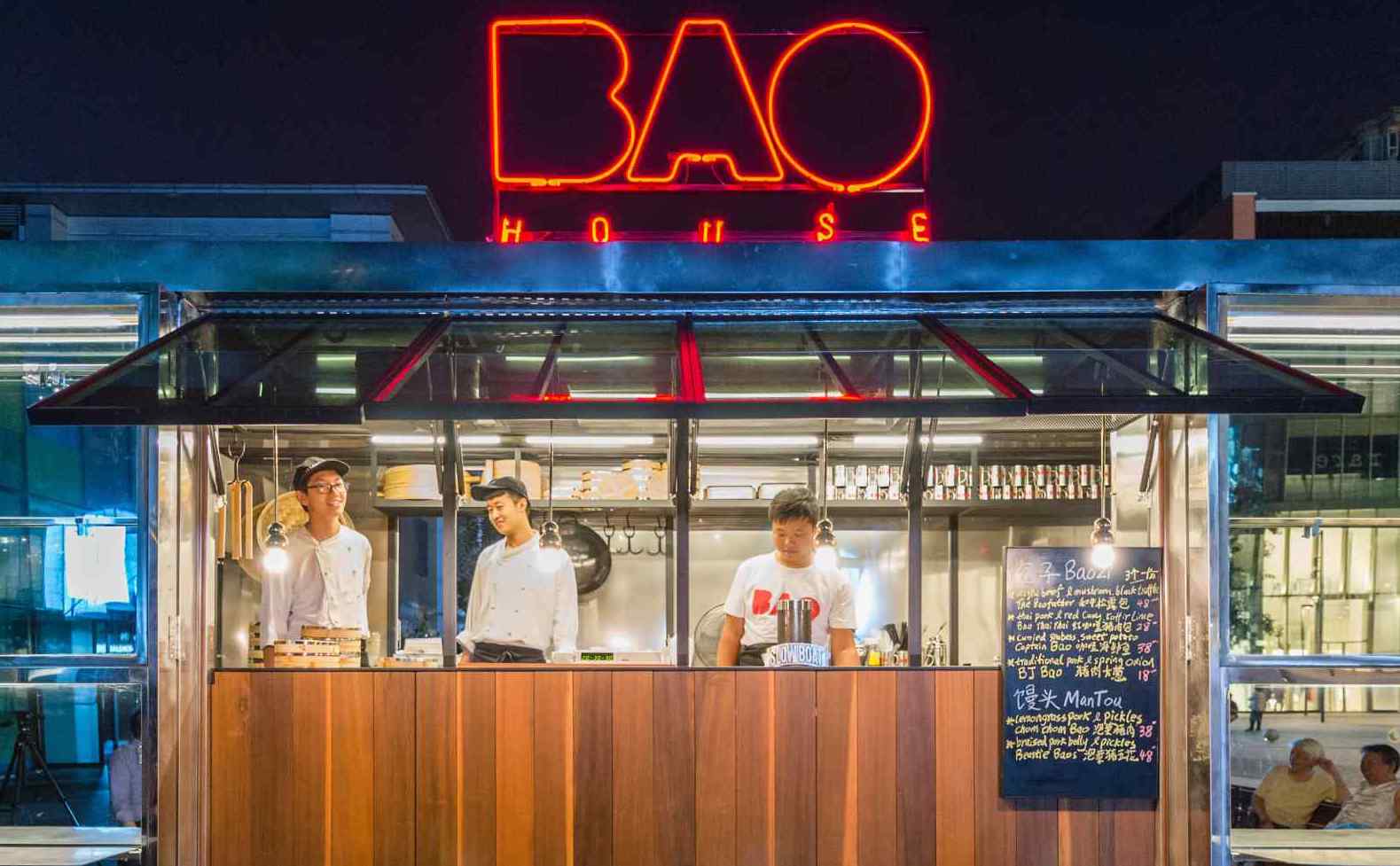 This is Singapore as a budding nation, transforming from the dull baby blue circle filled with endless potential into the vibrant triangle that propels into the endless void.

The upwards gradient of red to yellow signifies a transition of banality into energy and vibrancy. There are also multiple triangles of varying warm colours to signify the resilience we share as a country that defies the odds of many conflicts. With triangular shadows placed below to create a spatial illogicality.

There are however, two varying versions of spheres: one baby blue and one dark blue. The baby blue represents the infinite potential with decreasing opacity to reveal transparency, as a statement to the political environment in Singapore, whereas the dark blue sphere that is slightly smaller creates visual weight to imply sturdiness and foundation, holding balance in the asymmetrical perspective in the picture.

The dark blue sphere offshoots into multiple horizontal and vertical lines of different weight, paying tribute to Singapore’s skyline as well as the concept of Constructivism in a Singaporean context. The diagonal lines with weaker weight in one end helps to create the spatial awareness within the picture. 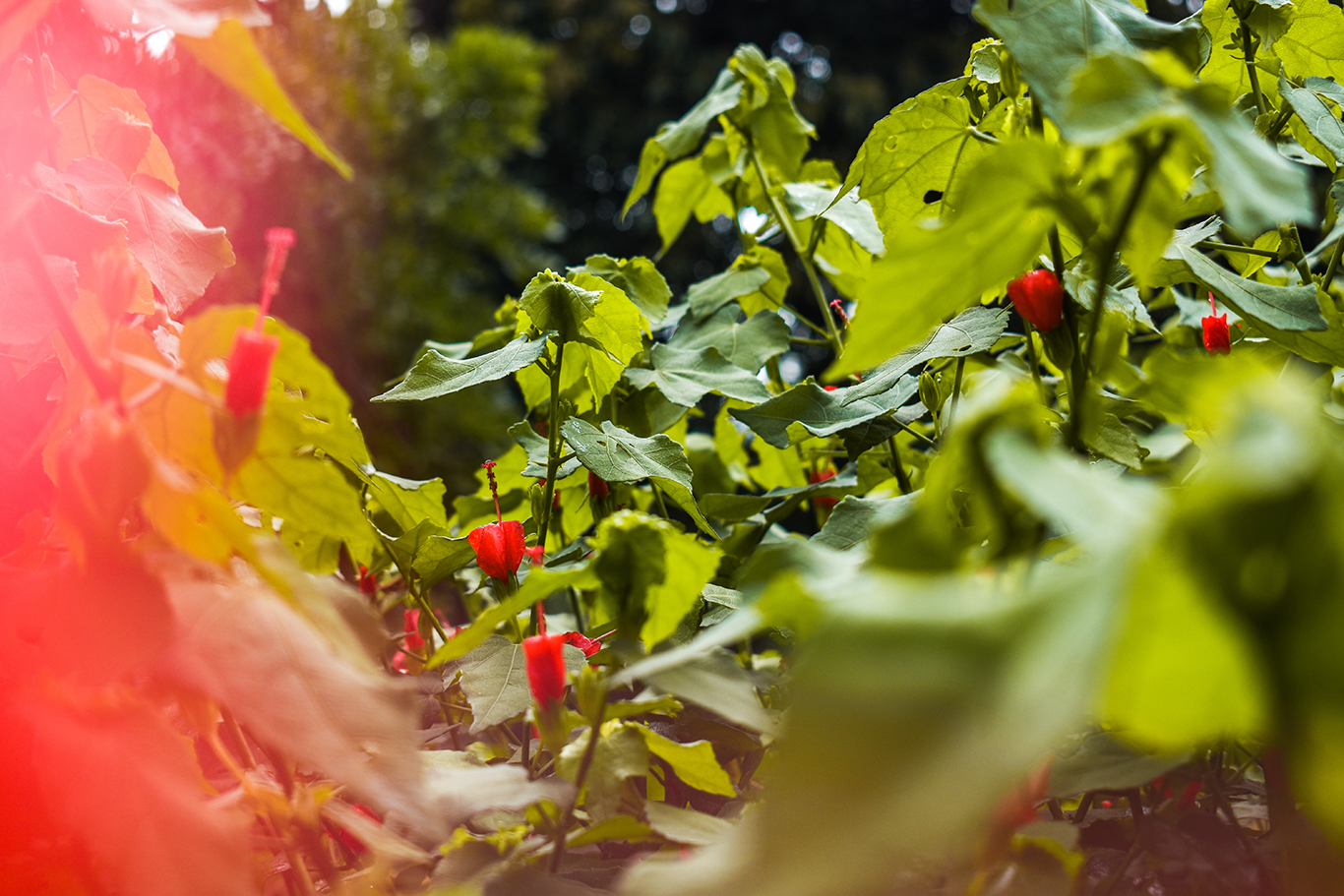 After a stroll through the Botanics Garden, I happened to notice a tiny dragonfly perching on a green stalk.

I found this scene quite interesting as there were a few elements that were visually dynamic. Firstly the dragonfly was just sitting on the tip of the leaf minding its own business, being comfortable in its own environment. Secondly there were still morning dew even though it was already 5p.m. And thirdly we were near a water body. I realised this dragonfly was living in its own version of a HDB flat and this was the Singapore culture I was looking for ,albeit rudimentary in its aesthetics.

The graphic above expresses the art nouveau quality with its usage of floral and fauna as icons. Even though I didn’t use curves, I took elements of abstraction and turned the dew into circles. I kept a minimum use of colours but using clear cut, criss cross lines to respect the dynamic and bold lines art nouveau employs.

This is Singapore culture as it is merely a visualisation of the urban lifestyle we surround ourselves with, projected onto the organic “skyscrapers” the dragonfly lives in. It stands on the point that art nouveau wants to transform architecture into something living and floral-like.