Link to previous documentation (PROCESS) about making Morrie can be found here.

To be very honest if you find this documentation lacking that is because most of my documentation can be found on the previous post!

Without further ado, let us look at the final Morrie: 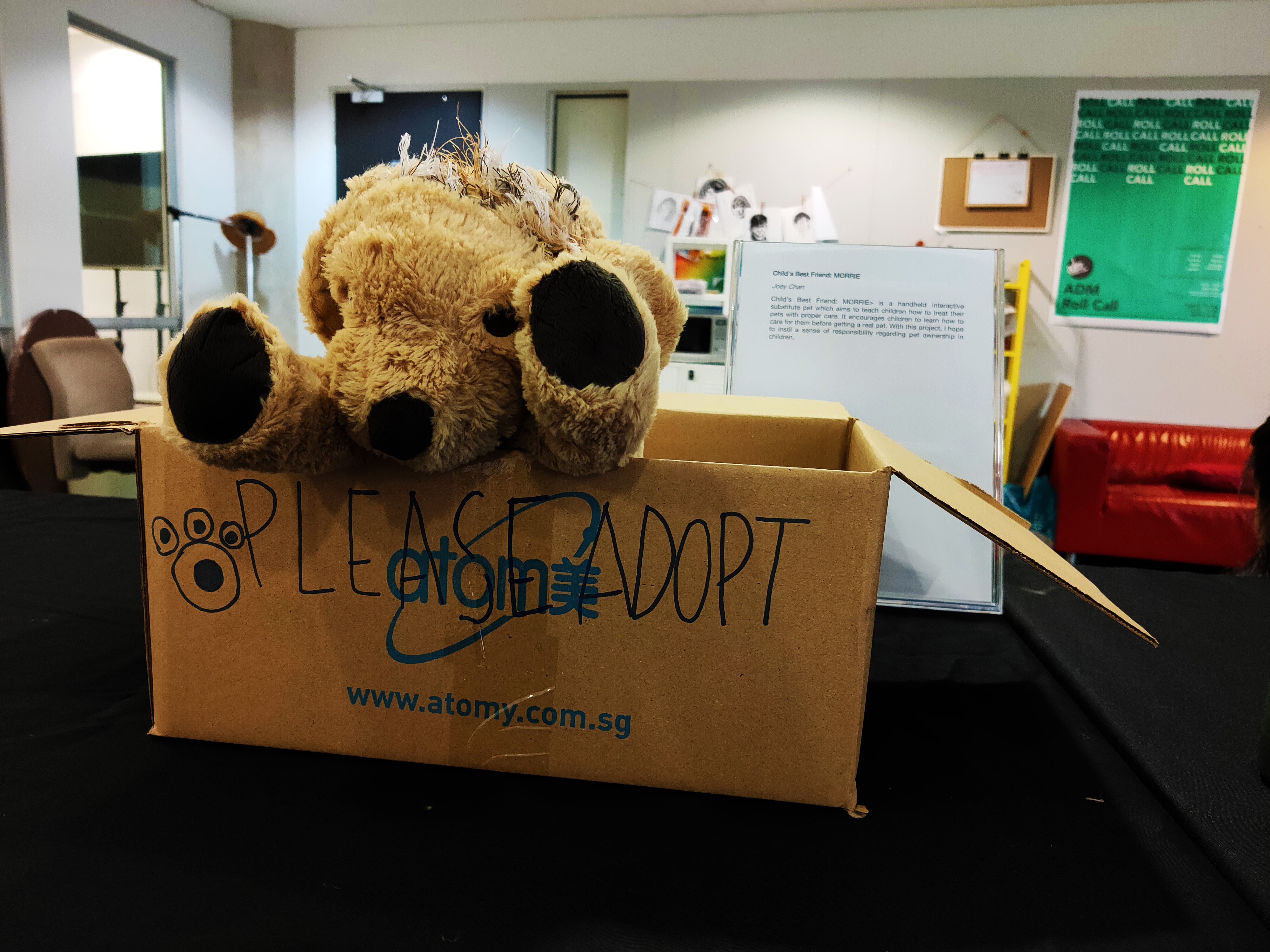 <Child’s Best Friend: MORRIE> is a handheld interactive substitute pet which aims to teach children how to treat their pets with proper care. It encourages children to learn how to care for them before getting a real pet.

With pet abandonment and neglect on the rise, along with the abundance of healthcare and time needed to care for a pet, people are becoming receptive to the idea of throwing all their responsibilities with a snap of their fingers- that is, to dump their pets away or simply to put in minimal effort to take care of them. Furthermore, the stressful climate in Singapore’s fast-paced and demanding society leads to pet abuse when their owners vent their frustration on their pets.

I believe that the mindset of taking care of our pets stems from the learning we gain when we are children. With this project, I hope to instill a sense of responsibility regarding pet ownership in children. Children interacting with MORRIE get to experience first-hand how it is like to take care of a pet’s emotional and physical well-being (not in terms of survival needs). This will hopefully pre-empt them about the commitment they have to put in for a real pet.

Interaction with Morrie can be found in the trailer below:

When it is lonely, it whimpers sadly.

When someone scratches him under the chin, it will wag its tail and head. This is triggered by a stroke sensor using conductive thread!

When someone scratches its head, it will whine happily. This is triggered by the ultrasonic sensor embedded in its collar!

When someone presses it too hard, it will whimper in pain. This is triggered by a Force Sensitive Resistor at its back!

Morrie is placed in a carton box, because that is the stereotypical place where animals are abandoned in. This heightens the sense of “abandonment” Morrie represents, and the need for people interacting with Morrie to “un-abandon” it by giving love, attention and care. Morrie is just a puppy afterall!

So there were minimal changes since my last presentation about Morrie. The following are updates about what I have done with Morrie:

It was time to get Morrie to bark! After trying my first MP3 Module which had no whatsoever guidance from the internet (they did not have any), Morrie still did not learn how to bark. I spent 3 weeks with this module before going to buy another module and trying it. This module was the DFPlayer Mini MP3 Module. At first, I was elated that it was working! But the current produced by the Arduino was intermittent, which resulted in a weird and loud buzzing noise from the speakers which I could not fix. Furthermore, coding with the module drove me insane because for some reason, it was constantly changing Morrie’s barking style each time I reuploaded the code despite the various barking tracks responding with their respective sensors. Oof.

At last, I went back to Sim Lim and they told me to get another of the same module I got in the first time! They personally tested the module for me and BAM, it turns out that the first module was actually FAULTY and that my code was correct. This was such a bloody waste of time but I am so glad Morrie was finally barking without any weird buzzing sounds…

I sewed a zip onto Morrie’s head, finally! As a result, he looks like an ill puppy (who had just finished having a big head surgery) who needs a lot more care and comfort compared to the average healthy pet. This came as a big surprise that was a happy surprise, because it supplemented my concept.

I decided to sew more threads that were similar to his fur colour onto Morrie’s head. I hope he gains more confidence from his balding issue. 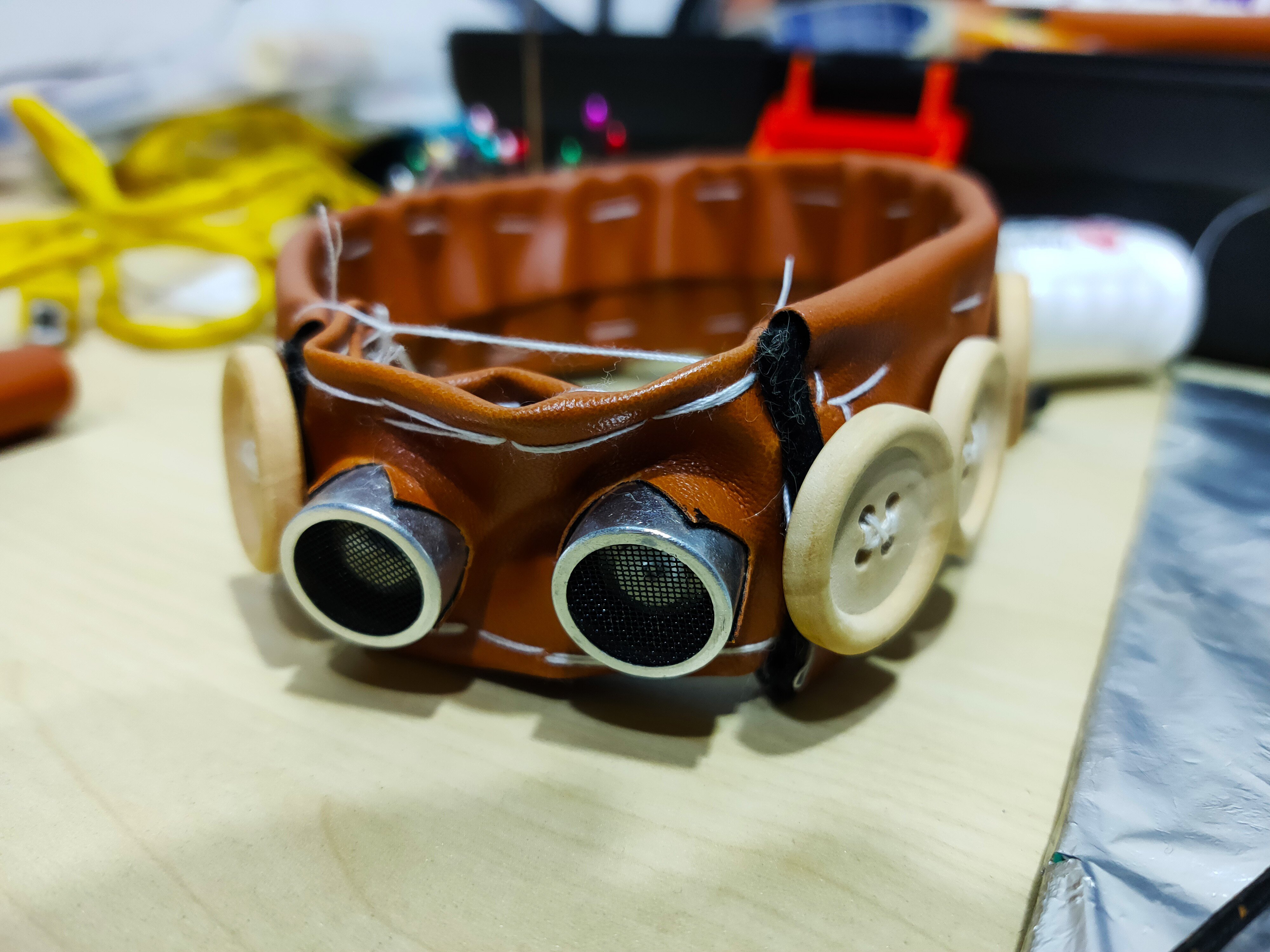 Overall it was actually my first time working with so many sensors at once but making an animal turn alive has been so exciting. I love animals, which made this project one of my favourite even though suddenly-malfunctioning codes and components did frustrate me a lot.

If time permitted, I would have made the LED lights work (it didn’t this time because its eyes were too thick to cut through and eliminating it completely was too weird…) but I had feedback that having it absent was better as it might make the dog too artificial looking.

One of my bigger surprises was how squishing all my components into Morrie made him heavier but more real; just like a real puppy! That made him the apple of many’s eyes during the showcase, which I am quite happy about.

In future, I will be certainly working with making more sensors work together and duplicating the same sensors to work in the same code. I will also like to experiment more with other sensors.

Thank you everyone who has guided me and taught me about turning Morrie alive! 😀