Ohno, the semester has started and more than a month has passed, with only 3/4 months left till gradshow.

What have I achieved? Nothing.

This week is a real eye opener and I am REALLY feeling the pressure. I know that I really need to start getting my shit together. No more idling around and its time to start putting all these words to action. As much as I want to just break down and start crying about what a mess I am in, I rather put that energy into actually doing work.

So yeah, barely to no progress at all over the holidays. Feel free to lecture or nag me about that. I totally deserve it.

Why have I been stuck?

I wasn’t committed or rather I wasn’t won over by my concept. I felt that there was still something missing and as I kept looking at my project, there was an internal disdain towards it, that made me NOT want to work or even look at it.

I just couldn’t get the right idea for my experiments. I have been wrecking my brain the entirety of the previous semester to come up with ideal experiments, but to no avail. Maybe its time to say that some of these animals are a lost cause. That is not to say that they don’t deserve my attention, but more like their situation isn’t suitable with the way my project is going towards. Their circumstances doesn’t need an invention or technology for intervention (that I can think of).

For the Grad Show, I will be working with at least three animals. The current animal lineup is as follows: Singapore Freshwater Crab, Hawksbill Turtle and Sunda Pangolin. These animals are chosen for their suitability in designing an invention type of experiments.

The remaining two animals: Raffles-banded Langur and Smooth-coated Otter, will still be part of the exhibit as a “future case file” but will contain no interactive experiments.

(2) Shift towards INVENTOR rather than SCIENTIST

But hey, inventions and science are synonymous with each other. Many great inventions out there came from the study of science. Look at the Curies, who through science, “invented” radium, or Thomas Edison, the inventor of light bulb that came about from the study of electricity.

(3) Inclusion of some environmental storytelling

I don’t intend on having big chunks of text around the stations with explanations or information. I’ll keep the text to a minimal. I want the information to be delivered through the objects that are strategically placed. For example, textual information: Singapore’s rainwater is slightly acidic, object storytelling: Jars of rainwater with pH levels indicated. To add a flair of mystery, I want the audience to pick out the story or information by interacting with the stations, similar to an escape room.

A little change in the approach in designing the experiments. Now, the experiments are designed based off the existing solutions provided, rather than creating a new solution from scratch. A good example of this is the experiment for the Singapore Freshwater Crab where bubbles are used to de-acidify the streamwater (actual scientific solution is to add naturally occuring alkali to balance out pH levels).

Main experiment will be focusing on studying which alkaline solution is best suited for de-acidifying the stream.

Each solution will have its own individual system with a rain and acid sensor. Audience can press the button to trigger the rainfall that will activate the system to de-acidify the water by the appropriate amount.

Main experiment will try to combat plastic pollution in the ocean, with the use of the PLASTICBEGONE-INATOR.

The development of the contraption is segmented into three parts: (1) Plastic detecting sensor – using a camera to detect plastic materials,  (2) Claw-machine – testing the grabbing mechanism remotely, (3) “In-water” Simulator – simulation of the contraption in water with spawning plastics.

Main experiment will focus on stopping consumption of pangolin scales by educating the public that it has no medicinal value.

Where to go from here?

Lets hope this time I will keep to this timeline. *praying hard*

Things I have learned from Sem 1:

(1) Trying my best to work off of cloud, and will make it a habit to backup my work to an external storage.

(2) Stop thinking, and start working. I have just been going on this never-ending cycle of excitement to get started followed by feeling of doubts that the project isn’t good enough. Its time to break that cycle.

It is finally the end of the semester! But it is also crunch time with only five months remaining.

What to do over the break?

First up, get my damn laptop fixed. I just sent it in for water damage repair. There is a chance that I might lose all the files I have worked on for the past 14 weeks. If the process of retrieving the data becomes too tedious, I might have to fork out ALOT of money. So, while waiting for the verdict (and while i cry). I will be working on retrieving all my research from scratch.

After settling the laptop drama stuff, here is my plan for the break.

Currently I have a rough plan on the experiments for each of them, but now I’m going to begin designing it out properly.

Start creating the first mock up for these two animals:

With the design in mind, I’ll start hunting for materials and creating a first draft of the experiments. If the first draft turns out well, I could use it for my final, so I intend to treat it as if I’m making the actual experiments.

Brainstorm on the other three animals:

I’ve been neglecting my other three animals (well partly because they are a pain in the ass to brainstorm). This involves planning and designing the experiments.

Work on mockup for one of them; Pangolin or Otter?:

I’ll try to start working on another mockup for a third animal.

End goal of this break?

By Jan, I should have planned for every animal, three first mockups and prepared to begin the mockup for the other two.

Also, get started on my FYP report!

For consultation, I’ll try to keep both supervisor’s updated biweekly either in person or through Teams.

Settle my laptop issues, so that I can start working properly.

Also, retrieving all my research.

Finish first mockup for the Crab and Turtle.

Before the Start of Sem 2:

Finish first mockup for the Pangolin or Otter.

And click here if you want to try and get your fortune read!

Project Done by Fizah and Tanya.

Plans for the final project:

The takeaway from last week was how do we engage the audience even further, and get them to be interested to try out our performance again. 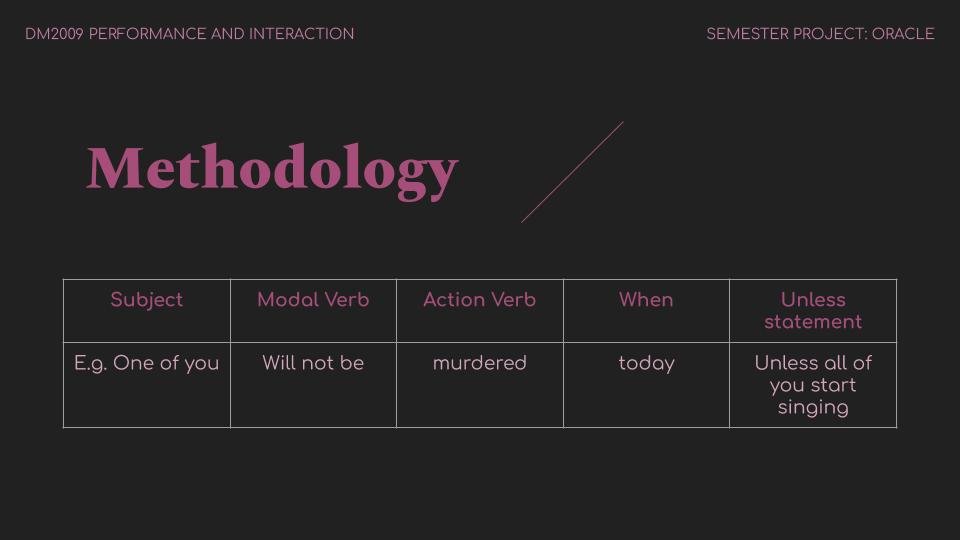 Our initial methodology was to have each participant to randomly select a number and part of a sentence by shaking the sticks and that will form a sentence.

We modified our methodology, to hopefully make it more engaging!

Our performance consists of three parts: 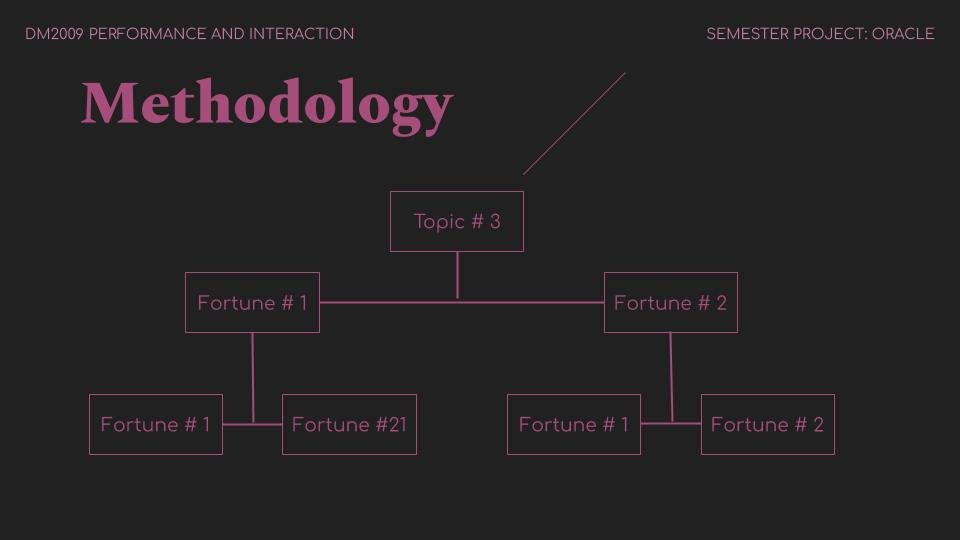 We are hoping that this is a more consistent approach and engage people to try it again!

Also, we got our equipment, so we can start working on the Arduino stuff! 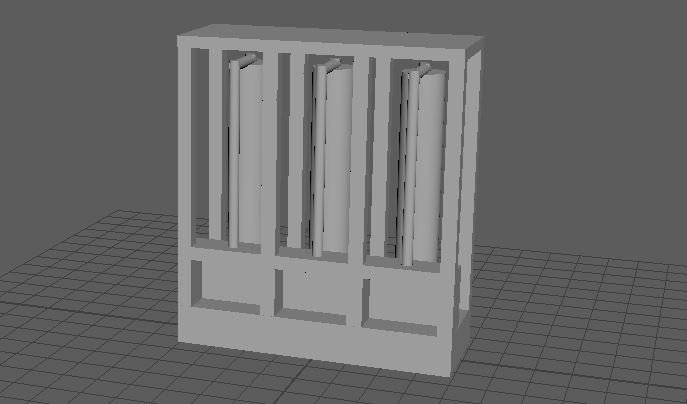 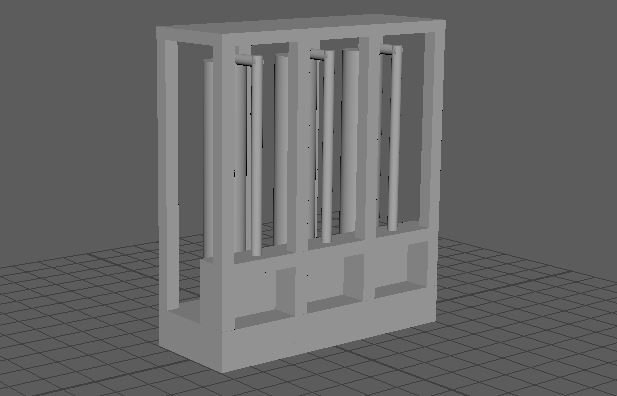 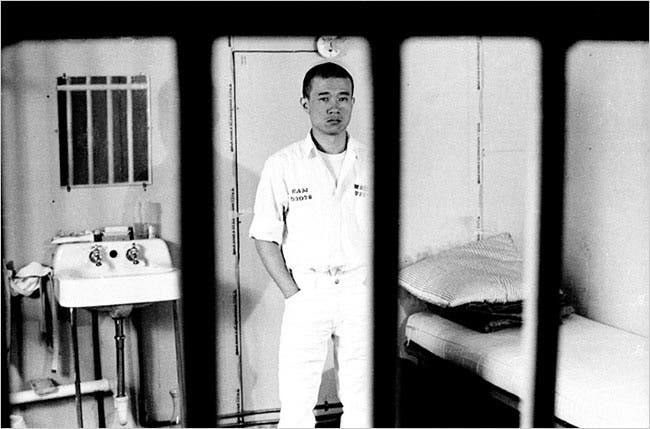 Click here for the PDF version of my presentation!