Before I talk about one installation, I shall give my general opinion on the field trip.

I have visited the National Museum a number of times and I had always enjoyed the Glass Rotunda exhibit. However, after today’s field trip, I have a deeper appreciation of the entire exhibit.

So I had a thought.

Is my inability to associate the Glass Rotunda exhibit to the history of Singapore caused by my laziness to read chunks of text or by the design and structure of the exhibit?

One thing I thought could help with the association would have been to place the Magic and Menace exhibition adjacent to the Glass Rotunda exhibit so the relationship between the two becomes clearer.

Imagine walking through Magic and Menace and having a magical door that leads you into the Glass Rotunda exhibit from there.

Nonetheless, the Glass Rotunda exhibit doesn’t cease to amaze me every time I step into the space and now knowing more details, I’m in greater awe.

I guess the only “complain” I have is the proximity sensor at the last section of the exhibit that wasn’t reactive enough. The issue I felt was that the trees didn’t appear fast enough. From what I’ve gathered from taking Interactive modules so far, a comment that is often received is that feedback or reaction should happen instantaneously as to when an action is done. When there is a delay in feedback, people can’t associate their actions to that feedback so the outcome seems to appear random rather than on purpose.

I might have pointed out way too many bad points so I shall end it off more positively by saying that the exhibition was definitely an immersive experience which I believe is credited to the beautiful art as well as the sensory experience of using smells.

Now I shall move on to talk about one installation in the “An Old New World”.

The installation I have chosen is the one below. 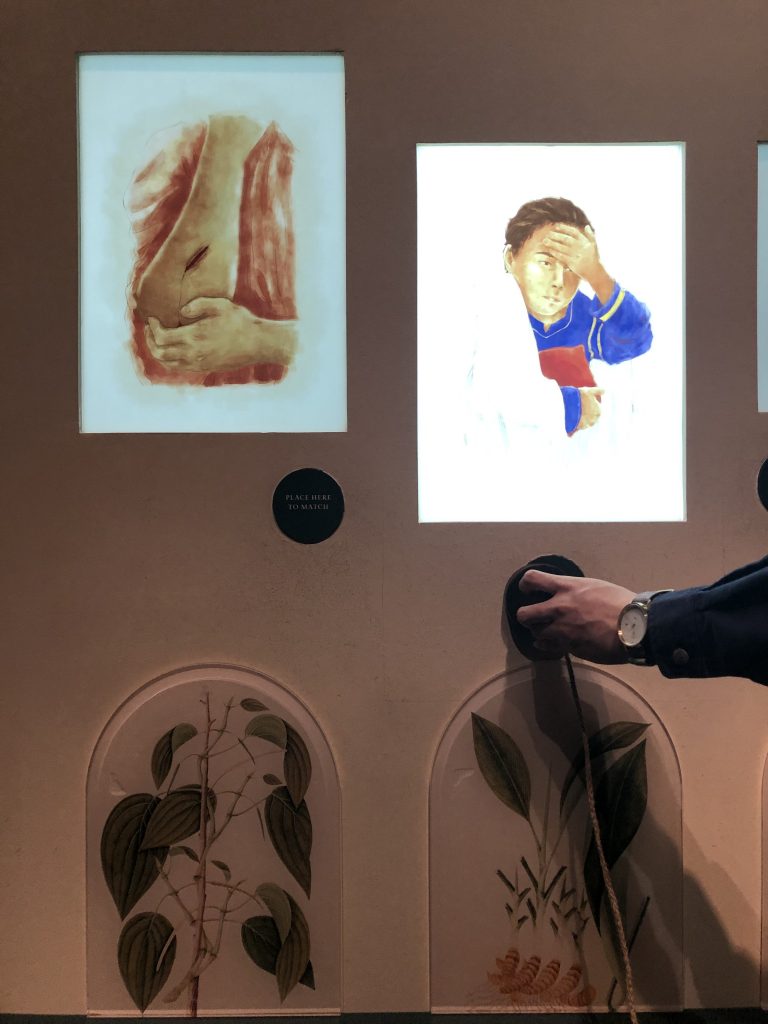 Using this wooden, circle object, we are supposed to match the herb to its remedy. The audience is invited to pick up the circle object and match it to the correct image. When it is correctly matched, the image lights up.

I didn’t actually have time to read this station properly, but my guess it is to show how people in the past use traditional medicine instead of western medicine to treat ailments. So in terms of the association to the rest of the exhibition, I think it is pretty relevant.

Honestly, I thought the interaction and technology behind it were impressive. When I first touch the circle object, it didn’t feel “technological” so, in a way, they hid the technology well.

I’m sorry to say, the feedback from the interaction was fairly disappointing. What do I mean by feedback? Basically how it communicates to the audience when you get it right or wrong.

Firstly, there was no indication if you got it wrong. Would have been more intuitive if there was red or green light behind the “Place here to match” marker.

Secondly, what was the association between the circle object and the herb? I think it lacks the visual element to contain the subject matter. For example, maybe in the circle object, the actual herb is contained inside it, then people can see the relation.

Thirdly, as mentioned by Shah, an animation might have served the purpose better. So when you correctly match it, the animation changes to when the person is healed. For example, for the cut on the arm, when accurately matched, the image of the arm changes to a healed wound. I believe this will help people better understand that the herbs are used as a healing technique.

Enough of the negatives.

So what can I learn from this?

It is important to take note of how your audience perceives the feedback. Every object in an installation should have an association with your subject matter to help the audience better understand your message.

In the context of my project, I guess what I should take note of the objects placed in my space, and figure out the user experience of it. How do you manipulate the space, objects and the artwork so that the audience interact with it the way you want them to?