I came up with the thumbnails. Some of the keywords that I used in my ideation process are light, mirror/reflection, possibilities, symmetry, beauty, research, and discovery. 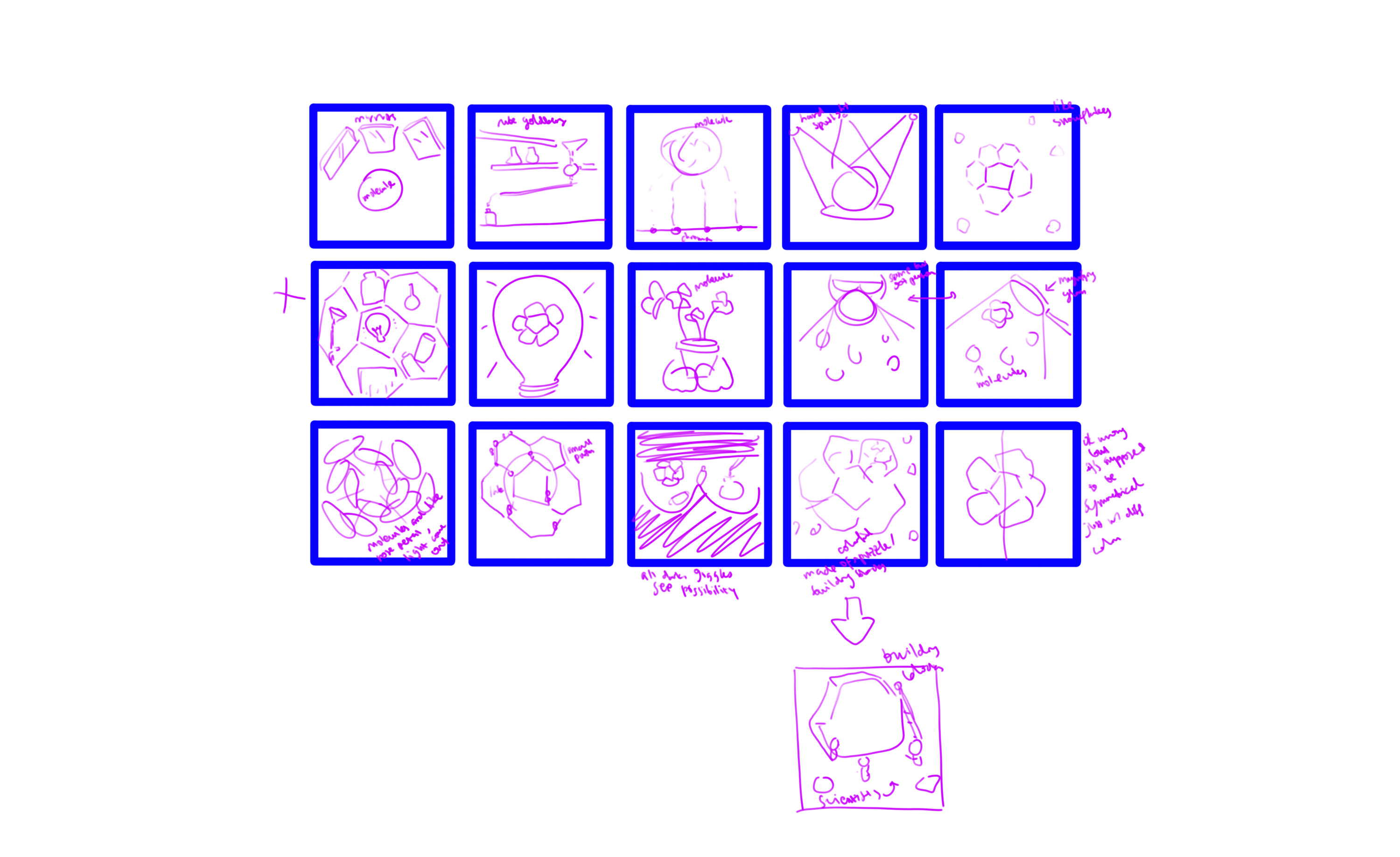 From the thumbnails, I decided on three of the strongest ideas.

I asked for feedback from Professor Ela and she really liked the mirror idea (idea 2). To be honest, that is not my favorite idea (mine is idea 3). I wasn’t sure whether I should go with the idea that I liked the most or the one that the client liked the most. In the end, I went with idea 2. It is not going out of my comfort zone per se, since I don’t have any comfort zone (I am not that well-versed in illustration yet…) so I thought it’d be a good exercise for when I go out into the “real world” to follow what the client likes more. It is, in a way, a challenge I posed to myself.

I want to practice drawing flat illustrations more, so here is my moodboard. I love the soft colors, especially the pink and yellow, and wanted to try using them.

I had some difficulties as I was envisioning idea 3 with this art style. For idea 2, I thought I had to go with a more realistic style for it to fit, but then I thought again, why not. Just try it. So I didn’t change my original moodboard and decided to just… go with it. 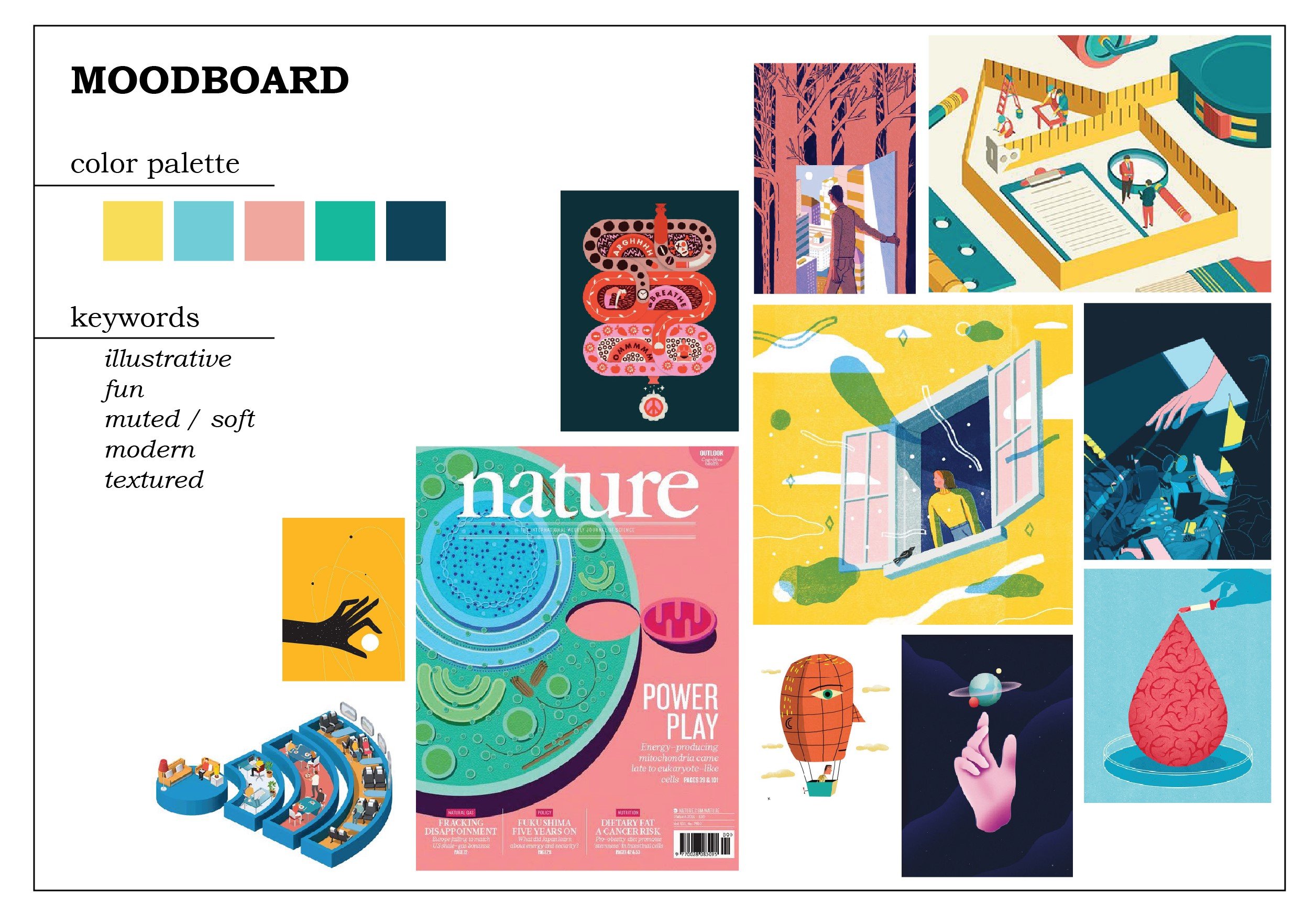 This is my final result. 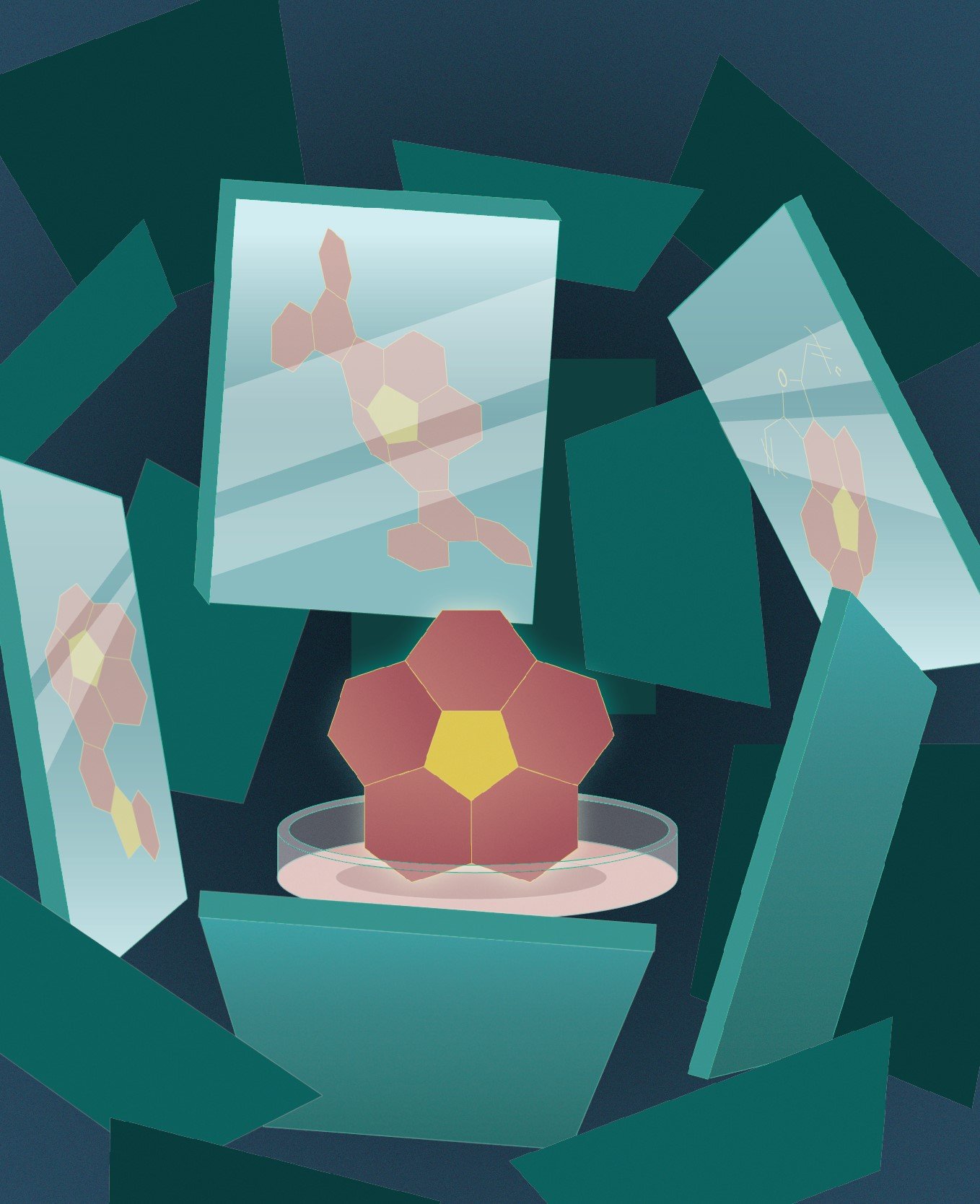 I put the corannulene in a petri dish to emphasize the fact that it is a molecule because one of the feedbacks that I got from my friend(s) is that they didn’t recognize it as a molecule, especially because I used color fill on them instead of the molecular skeleton. Taking into account the fact that the title of the journal would be in white, I used dark colors as the background. To draw attention to the corannulene, I gave it a bright color, although now I’m wondering if the pink and the yellow are too eye-catching.

My biggest struggle is giving depth to the whole composition. I added more mirrors with darker colors to illustrate mirrors that are further away, but it still fell flat. I also added noise (which made my Illustrator run slow…). In the end, I added gradients to most of the elements and a slight glow to the corannulene as an attempt to “save” the flatness. It’s still lacking, but it’s admittedly much better than before. However, I really should have made the gradient on the background more contrasting. I could also do better with my color choices.

I didn’t want to use gradients at first because they often turned out duller in prints compared to in screen, and prone to printing failures. I wanted to use a stipple brush for a shadow effect, but I am not sure how to do that (even after watching a video on how to do that) and I was running out of time (yes, I have terrible time management) so I took the shortcut which is using gradients.

There are so many things I could do better. However, it has passed! I’m kind of relieved since I was struggling and stressing over this assignment so much, and the result is certainly not the best I could’ve done, but I’ll give myself a pat on the back. All in all, that had been a great exercise for me. 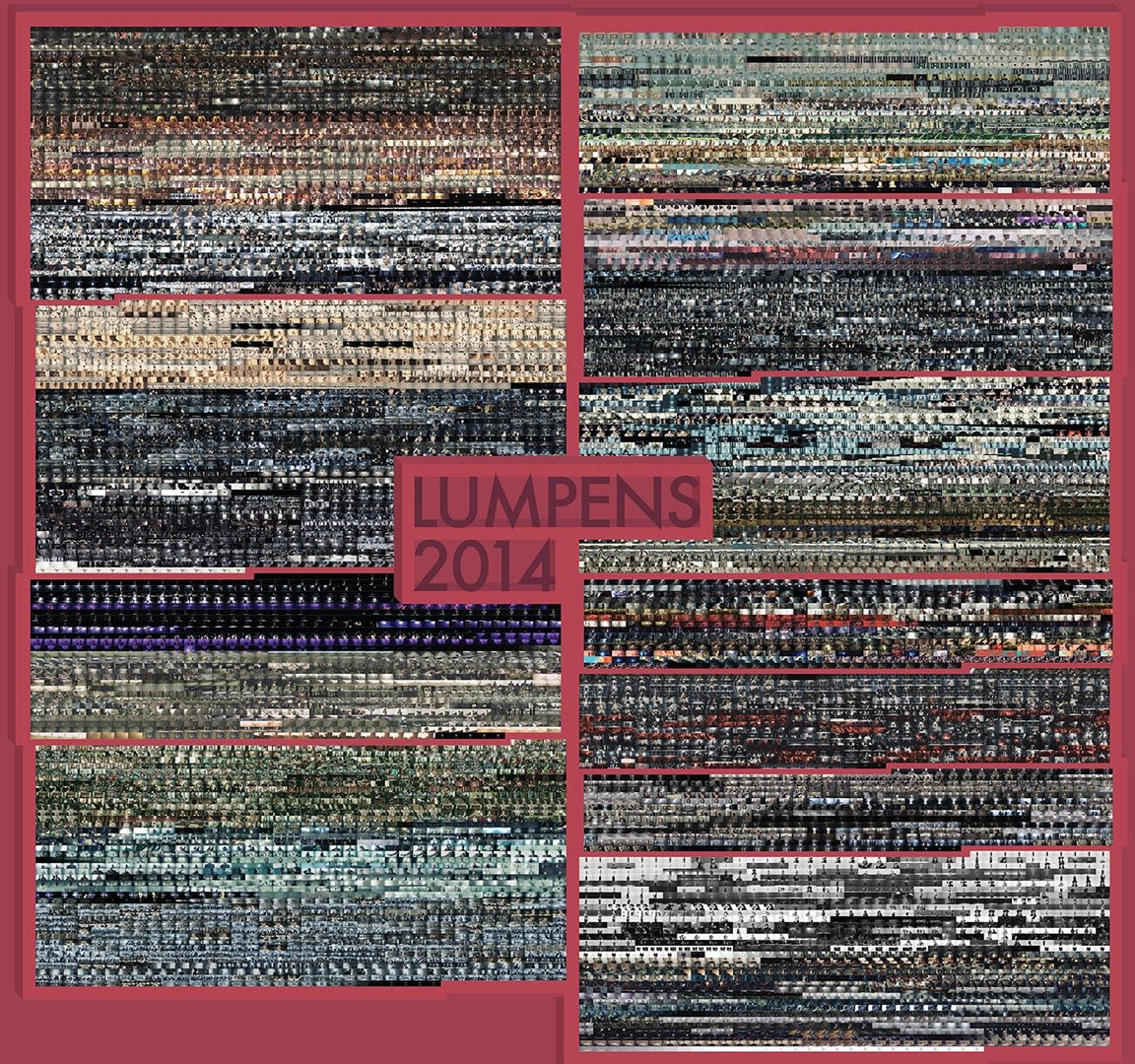 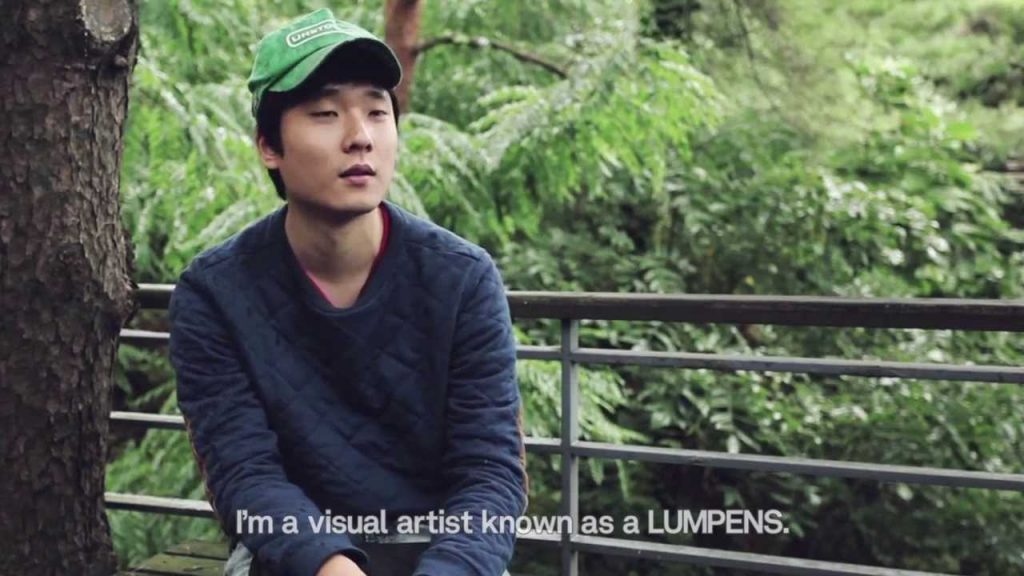 For the group mood box, we decided to use the other recording (the one I didn’t use). For that sound, we used rhythm sticks, triangle, and zig zag board. 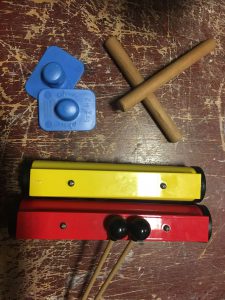 Here is my waveform analysis for the sound. 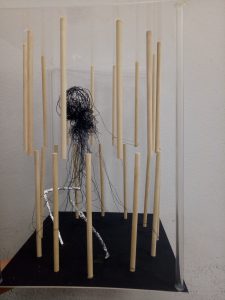 We put the model in a circular arrangement to represent repetition, although there is some kind of starting point indicated by the positioning of the wire (wrapped with aluminium foil) and the ball of wire and thread. 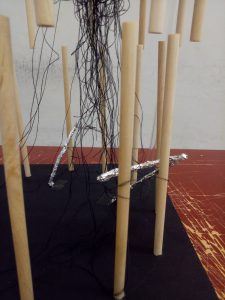 The wooden sticks represent the dominant, constant sound of rhythm sticks. They sound very stable and straightforward, hence we placed wooden sticks in the straight directions. The up-and-down positioning suggests that the sound is all over the place.

The wires wrapped with aluminium foil represent the subordinate, which is the zig zag board. The texture of crumpled foil suggested the rough, edgy sound of the friction. The sharp cuts of the sound is represented by the sharp edge of the wires.

The subdominant sound, which is the triangle, is represented by the ball made of wire and thread. The thread tangled all over the place since the sound of the triangle kind of “melted” into the entire recording and enveloped the other sounds. 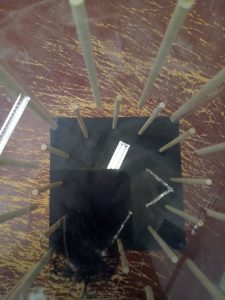 We also tried to make the frame “invisible” by using transparent acrylic and tubes to frame.

We put black as the base and thread color to give a darker, more mysterious mood; but it is the calming kind of darkness.

The challenges when creating this model:

One, the positioning of the up-and-down wooden sticks. We couldn’t get the positions right although we tried using several different methods; they always ended up a bit off.

Two, using the right amount of glue. If we used too much (especially on the transparent acrylic), it would look very messy. If we used too little, they wouldn’t stick very stably.

In the end, we required more time than we actually predicted due to those challenges. However I think our end result is good as our intention is clearly expressed in the model. 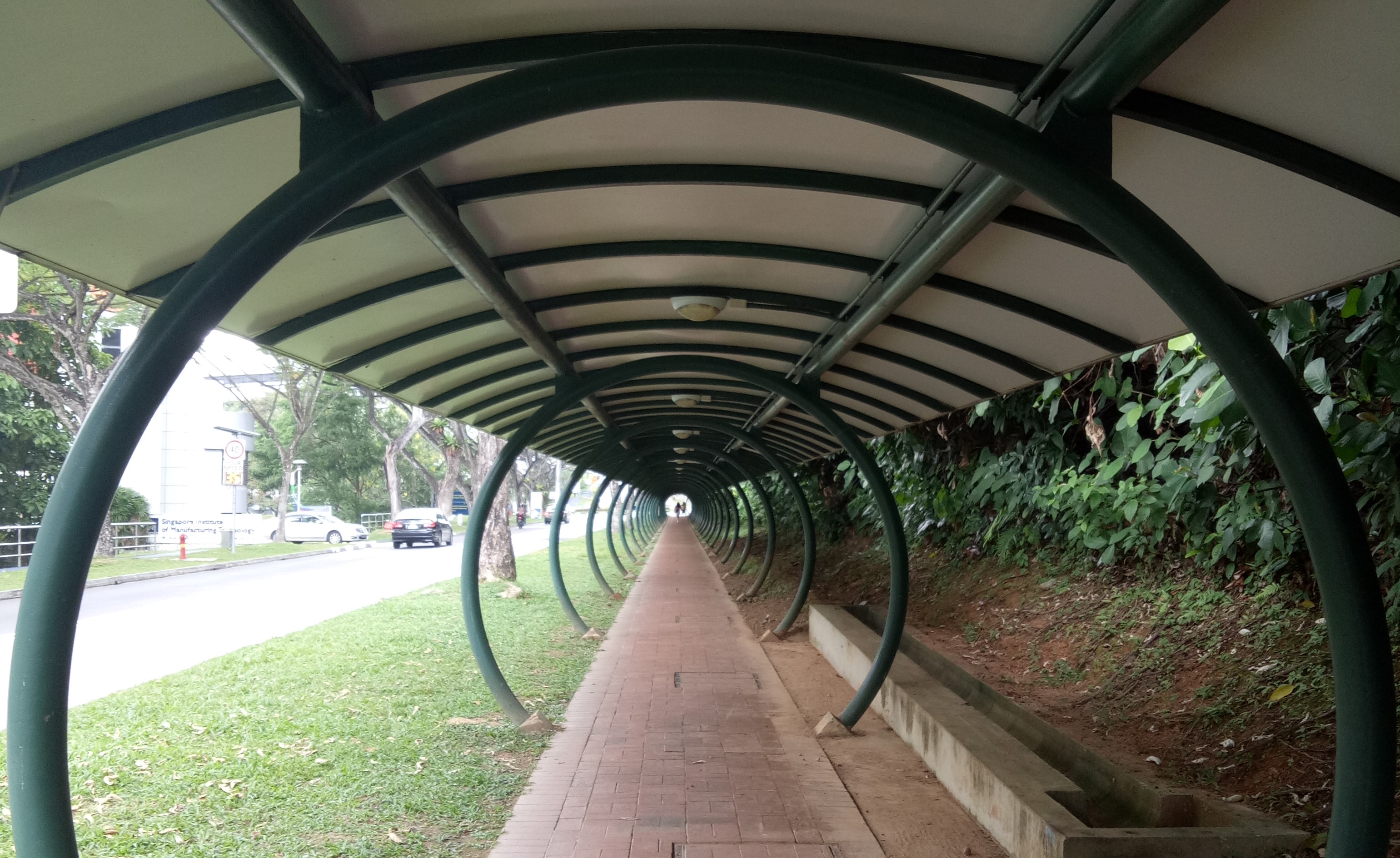 As a class exercise, we have to walk around ADM building to capture those three perspectives using our cameras. Let’s see what I take: 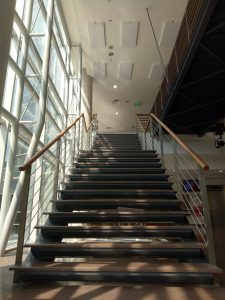 There is one vanishing point here; that is, at the top of the stairs, which makes it the focus. 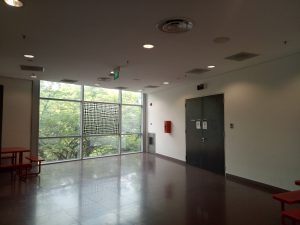 There are two vanishing points here, and they intersect at the corner. Our eyes are naturally drawn to the corner. 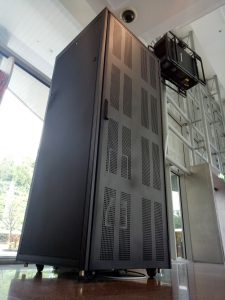 There are three vanishing points now. Usually to create the three-point perspective, we take picture from high eye level or low eye level.