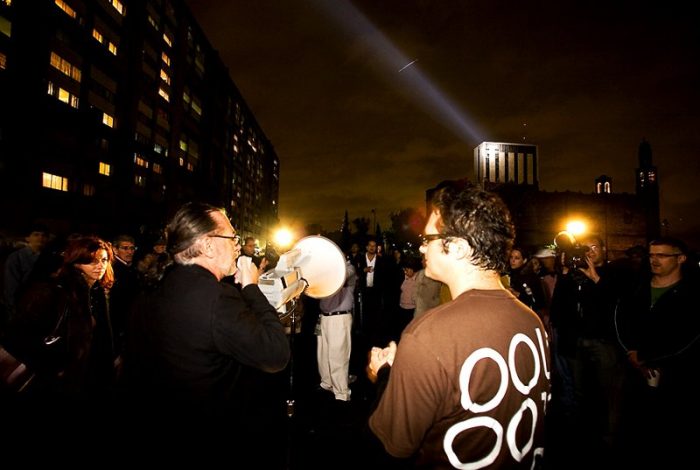 Project “Voz Alta” also known as “Loud voices” is done by Rafael Lozano-Hemmer. This piece was a memorial commissioned for the 40th anniversary of a student massacre in Tlatelolco, Mexico, which took place on October 2nd 1968. The massacre started as a government led attack to silence student protest against violence exerted by the riot police then. However, under an authoritarian regime, no formal investigation into the killings was ever initiated. This meant that the number reported and the name-list in the official documents were not accurately depicted. (More background of this massacre can be found: Mexico’s 1968 Massacre: What Really Happened?) 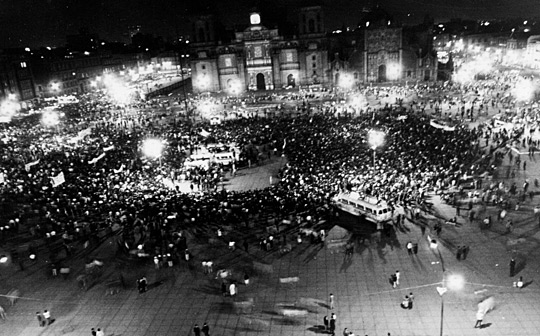 In this piece, audiences participated by speaking freely into a megaphone right at where the massacre took place. This is then translated as beaming a 10,000-watt searchlight in sequences of flashes onto the top of the building of the Ministry of Foreign Affairs. Locals could also tune into 96.1FM Radio UNAM to listen to what the lights were saying.

The voice-as-light projections superimpose public voice onto emblems of national heritage. With the use of sound, it allows the public to negotiate boundaries between historical record and the public collective memory of what actually happened, focusing on it as a mechanism for power. Through the use of these mediums, what “Voz Alta” achieved for its participants was an activation of memory associated with the massacre, and its potential to supplement the incomplete history. Ignoring the fact that some members of public has used this piece for commercial use such as a proposal, this piece is very significant in my opinion because it indicates a development in the politics of the government, what was once condemned is now slowly being overcome and this piece provides an agency for the public to facilitate and participate in this progression.

This is a supplementary video which also speaks of his inspiration for this piece.