Before we embarked on this project, we had to do a short exercise on a name-tag. We illustrated our name form to portray an aspect of ourselves. 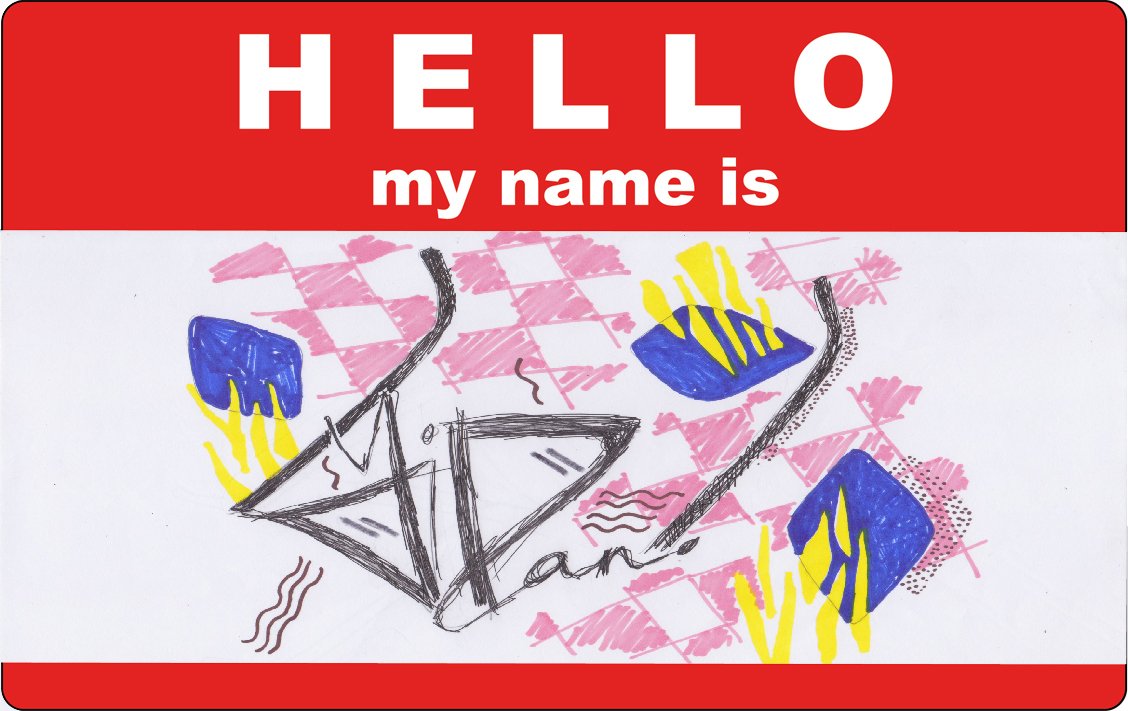 I used the alphabets ‘Y’ and ‘D’ to form the frames of a sunglasses. Presented in the Memphis style, this was to bring out my inner fashionista attribute.

For this project, we were tasked to leverage on the characteristic of an alphabet to create an imagery which represents 4 different occupation we want to have, realistic or not.

Personally, I knew I wanted to go for dying trades because I have a passion for these trades and it would be interesting to find out more information on why each certain trade was dying.  This eventually became my message. In the right places, I believe I could use Typography to bring out the different elements as to why each occupation was fading out.

Initially, I did not want to limit myself to 4 specific jobs but there were a few I felt drawn towards. Specifically, it was ice cream uncle, letterbox flyers aunties, shoe cobblers, hawkers.
After research, a few articles came to my interest:
https://www.straitstimes.com/singapore/tombstone-designing-a-dying-trade
https://pride.kindness.sg/millennial-fishmonger-hopes-keep-wet-markets-alive/
With that, fish monger and tombstone designer came into the picture as well.

These were my sketches: 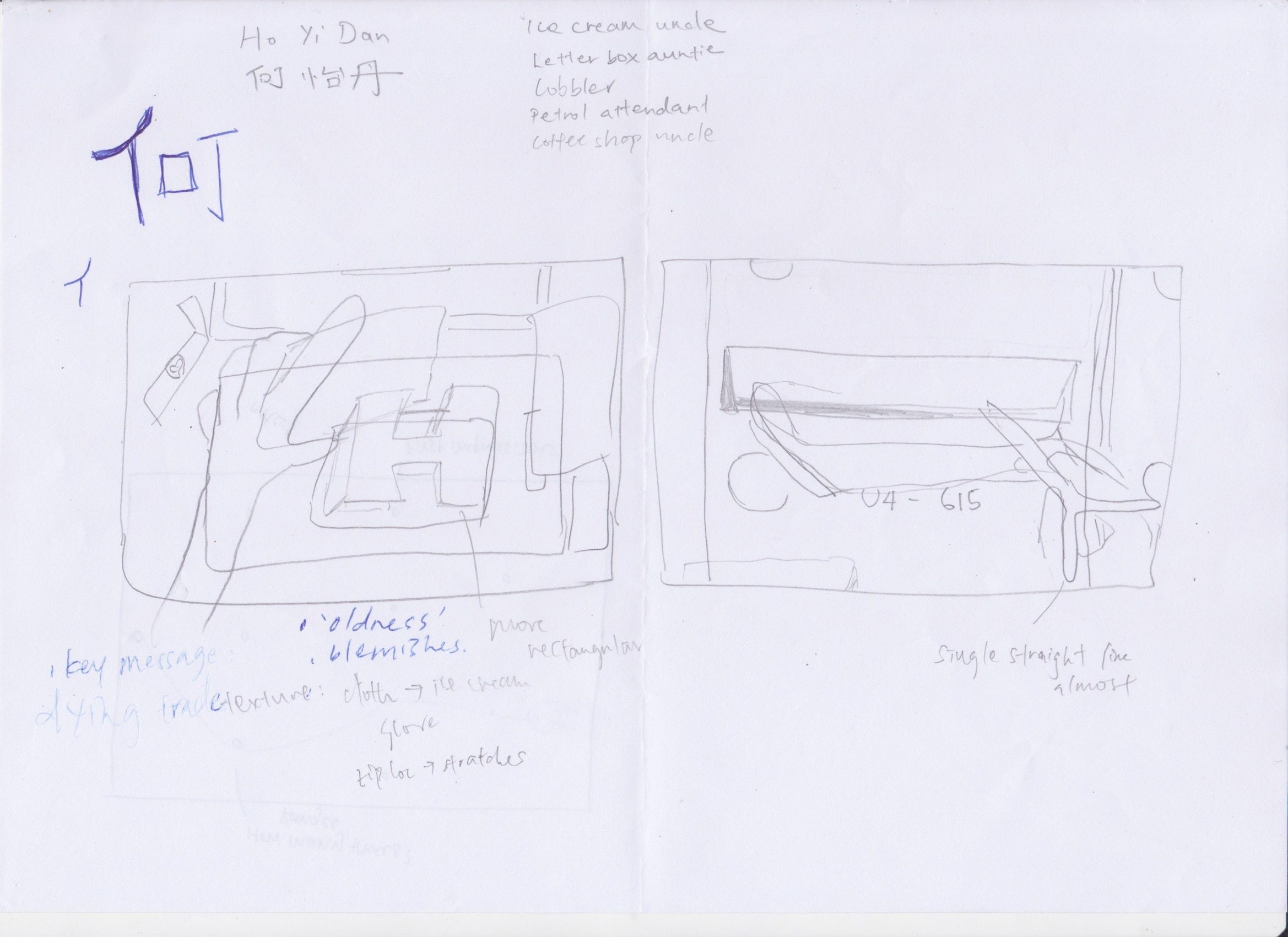 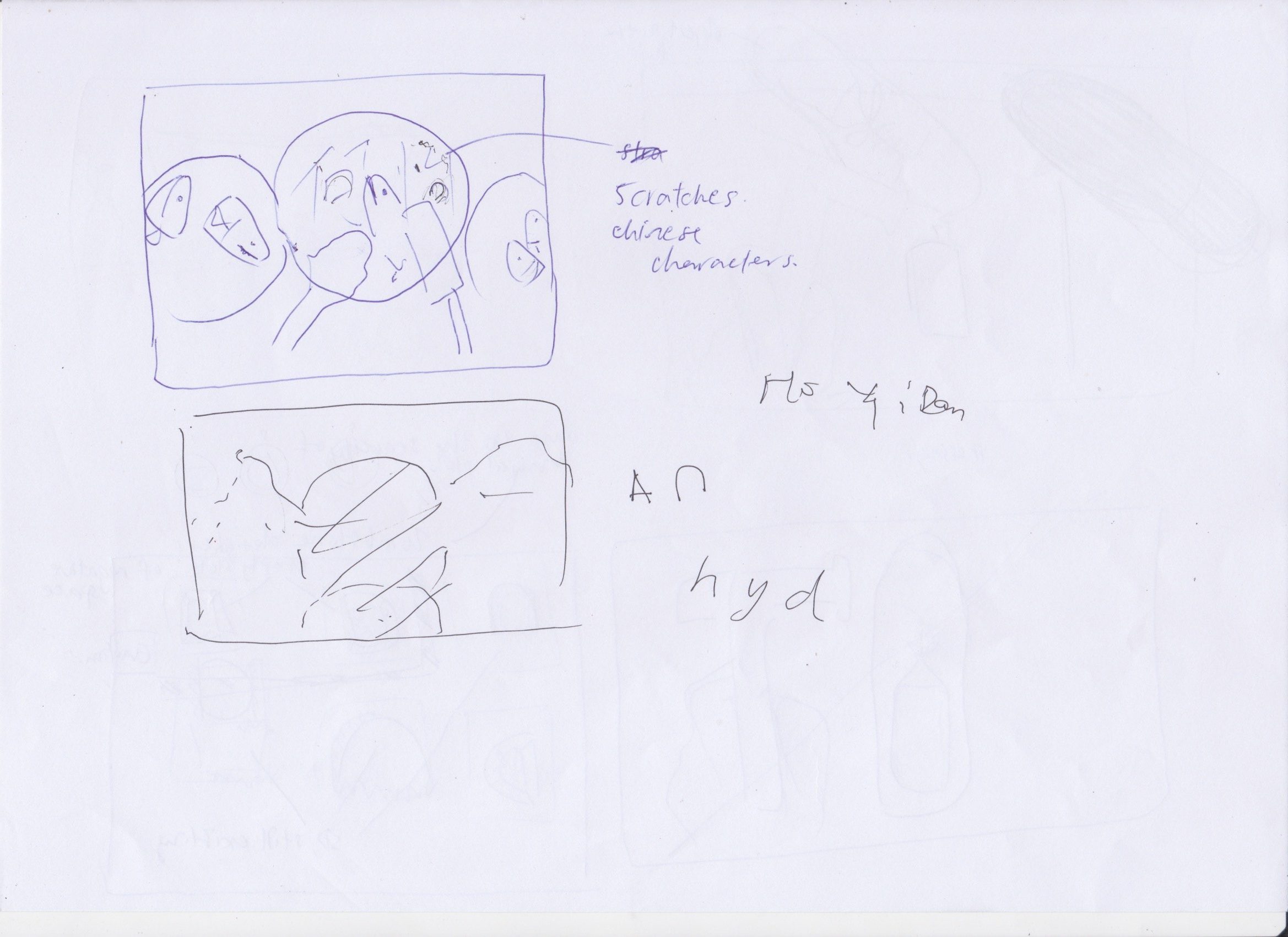 After the consultation with Joy, I drew it down to the Ice Cream Uncle, the Fish Monger, the Tombstone Designer and the Letterbox Flyer Auntie. 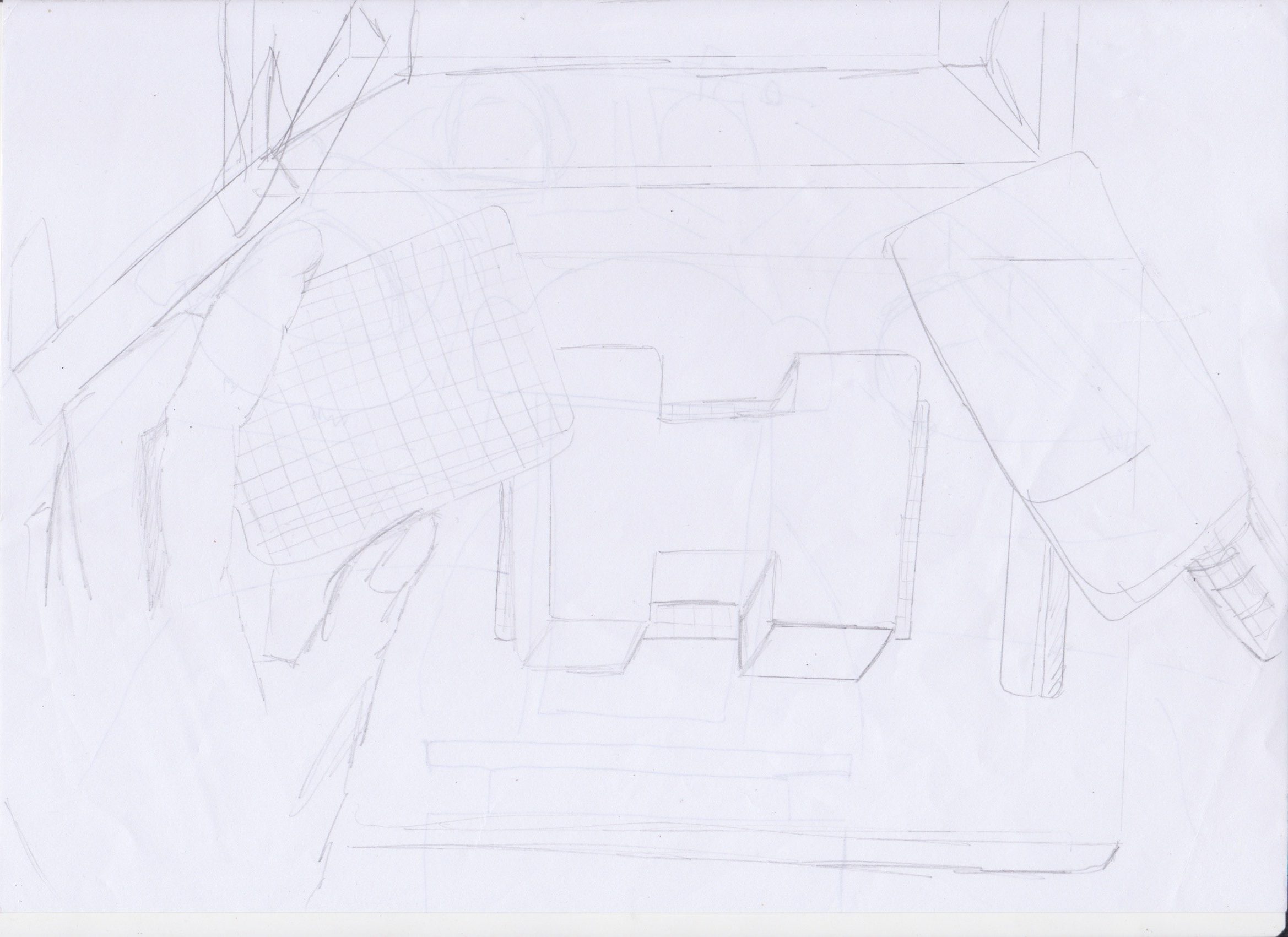 For this composition, I was intending to just use ‘H’ because its geometric features resemble the iconic rectangular block of ice cream most.  However, I came to realise that I had to grounded my message into the composition.

So why was the occupation fading away?

Hence, in order to implement that, I toy-ed around which some aspects of the compositions.

My work in progress: 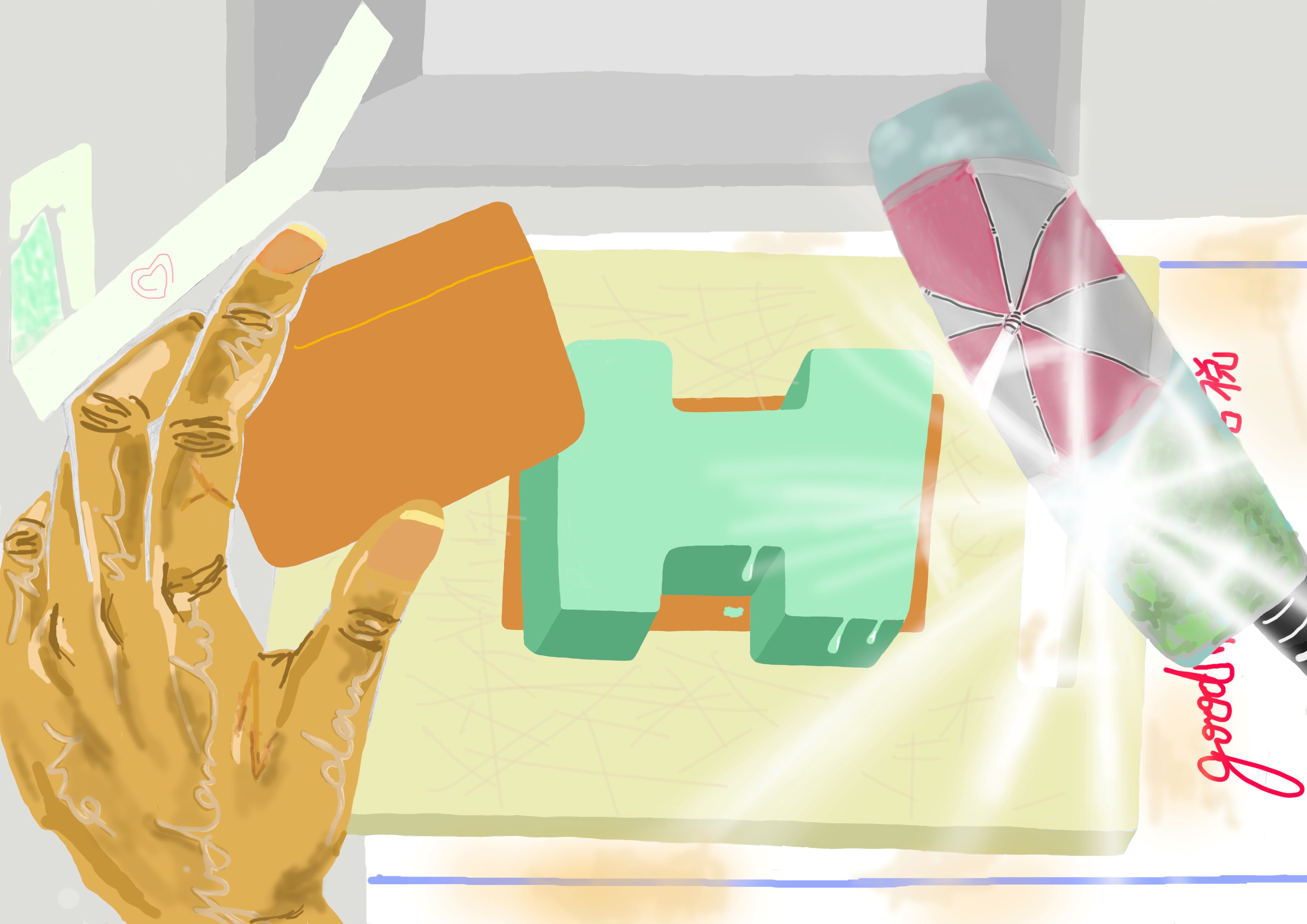 At this point, I knew I need to implement more textures and continue to blow up the emphasis on the alphabet. 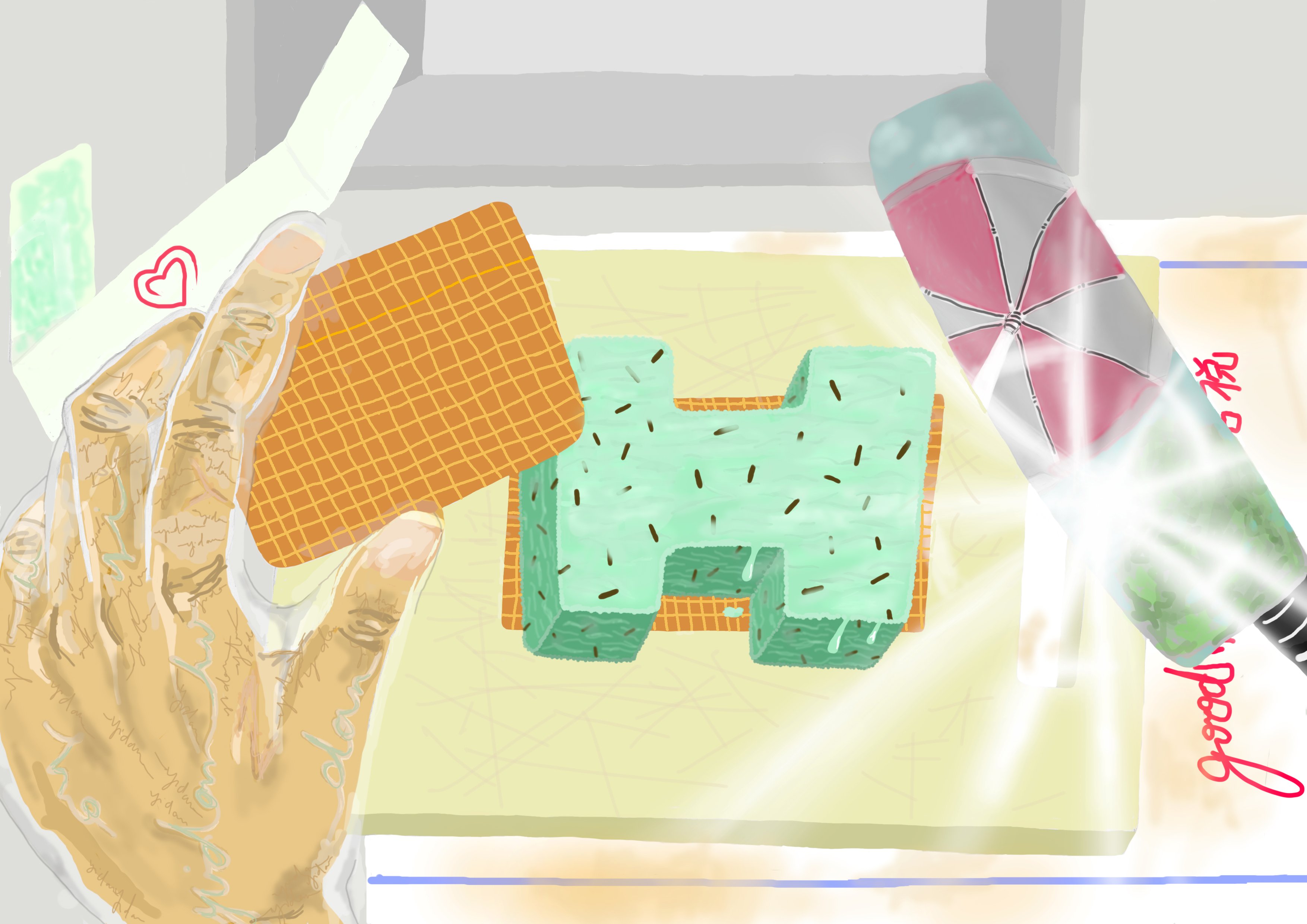 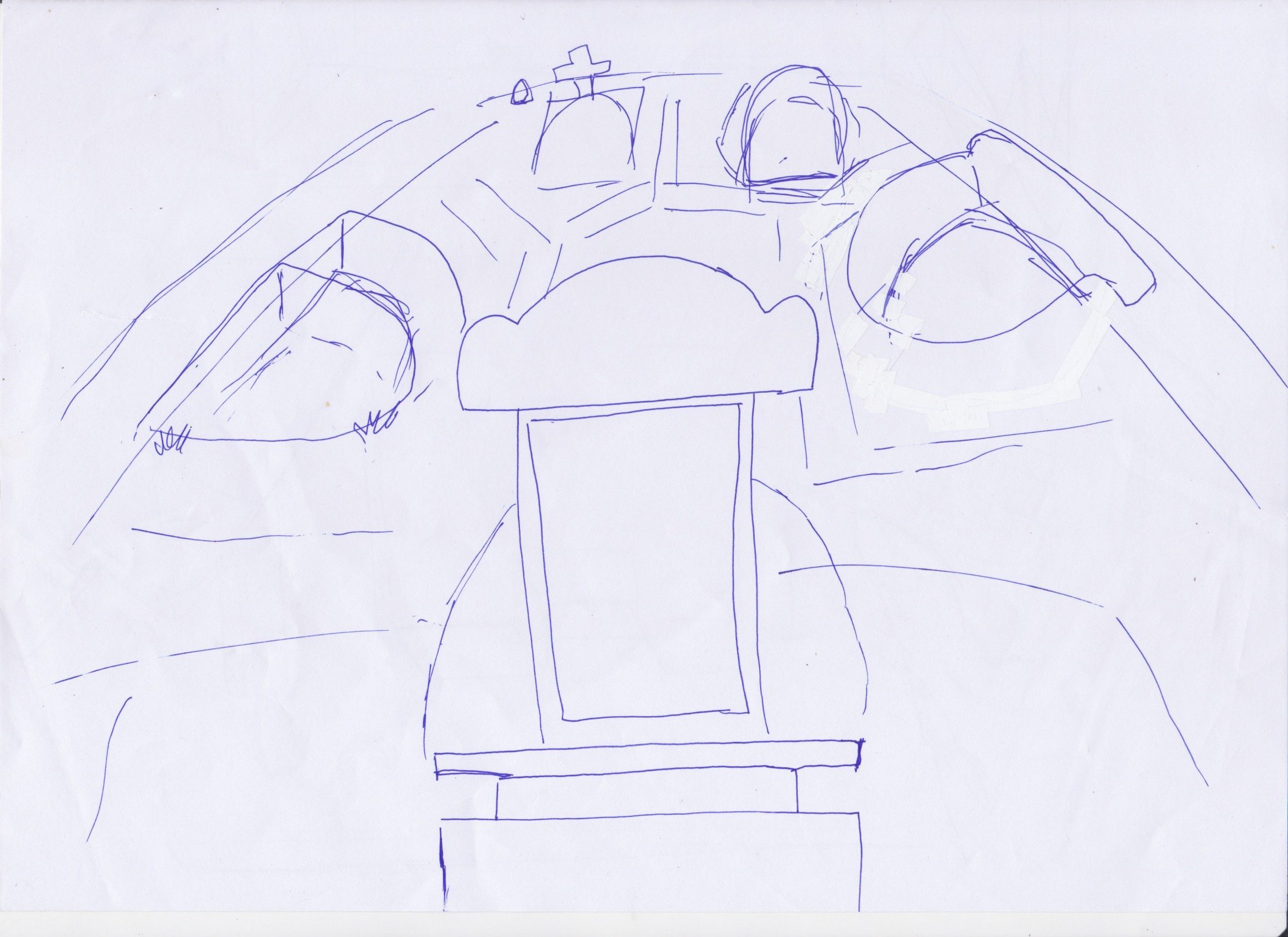 According to https://www.straitstimes.com/singapore/tombstone-designing-a-dying-trade, the reason why this occupation is fading out is mainly because of the increasing scarcity of burial plots.

I wanted to bring that out by showing that empty spots in the burial lands in which no tombstone was taking up that spot. I did so by portraying the empty spots with ‘D’ and ‘a’ in my nickname ‘Dan’ because of the negative space present in the alphabet. ‘n’ will be placed in as a tombstone still standing to show the contrast.

The initial struggle was trying to layout this concept. At first, I went for a top down view. However, it was there was no depth to it. 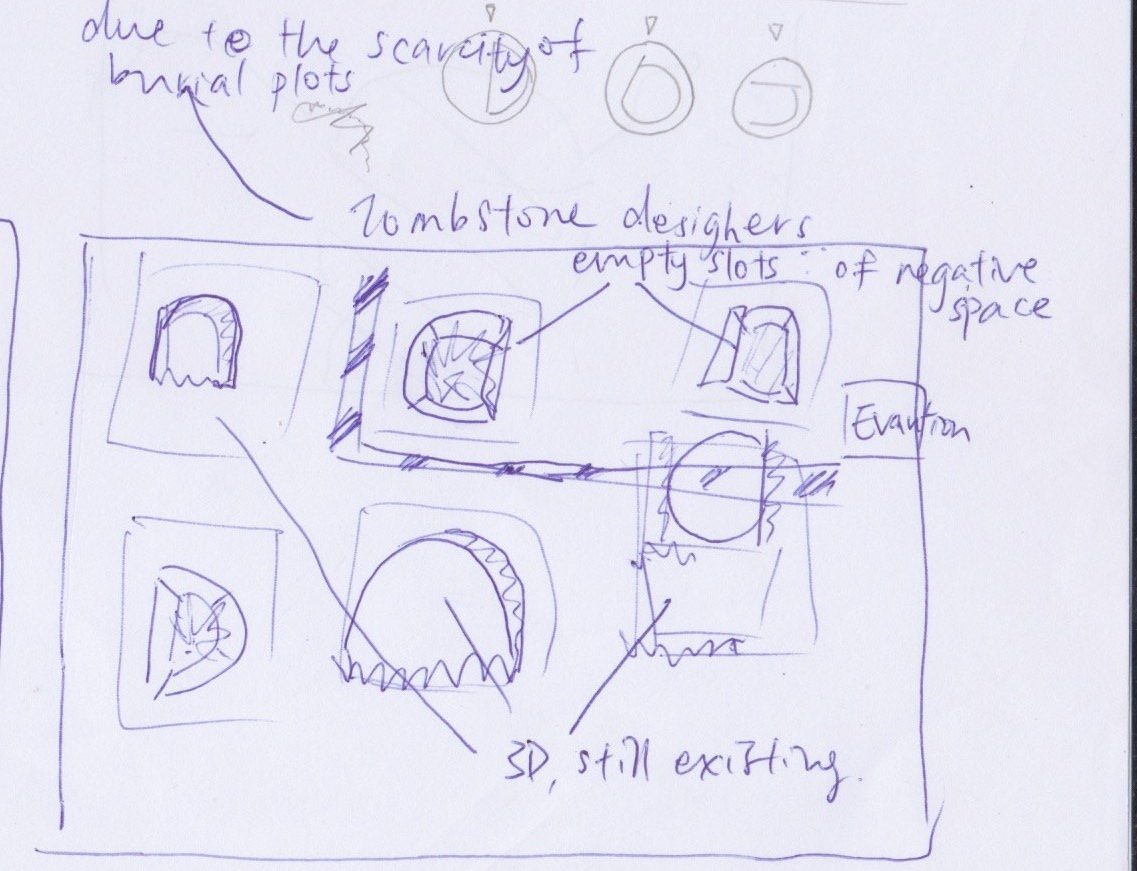 Joy’s suggestion was to do a front view instead, this way it would better bring out the “emptiness” of the negative space as well. Hence, the change in layout. 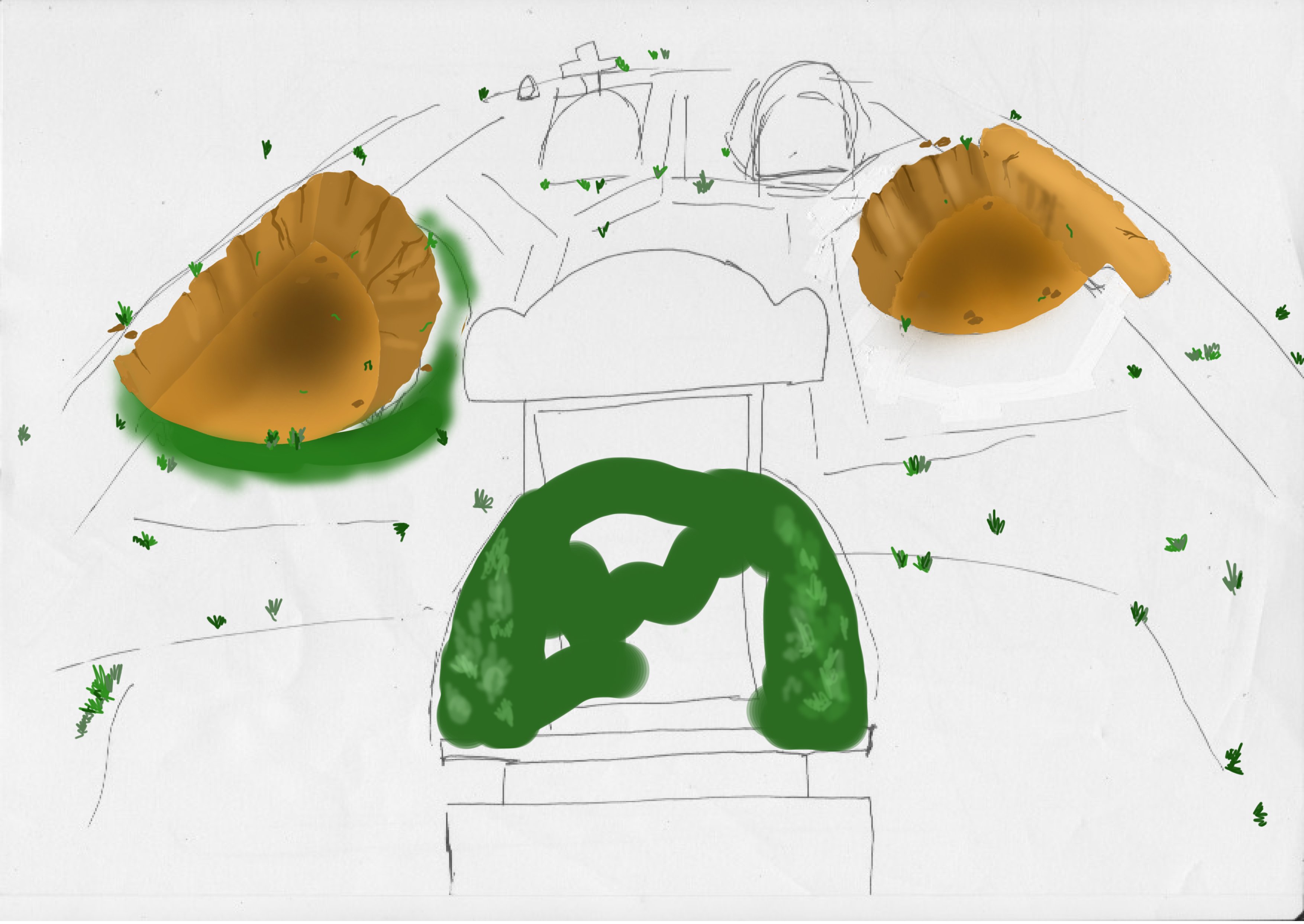 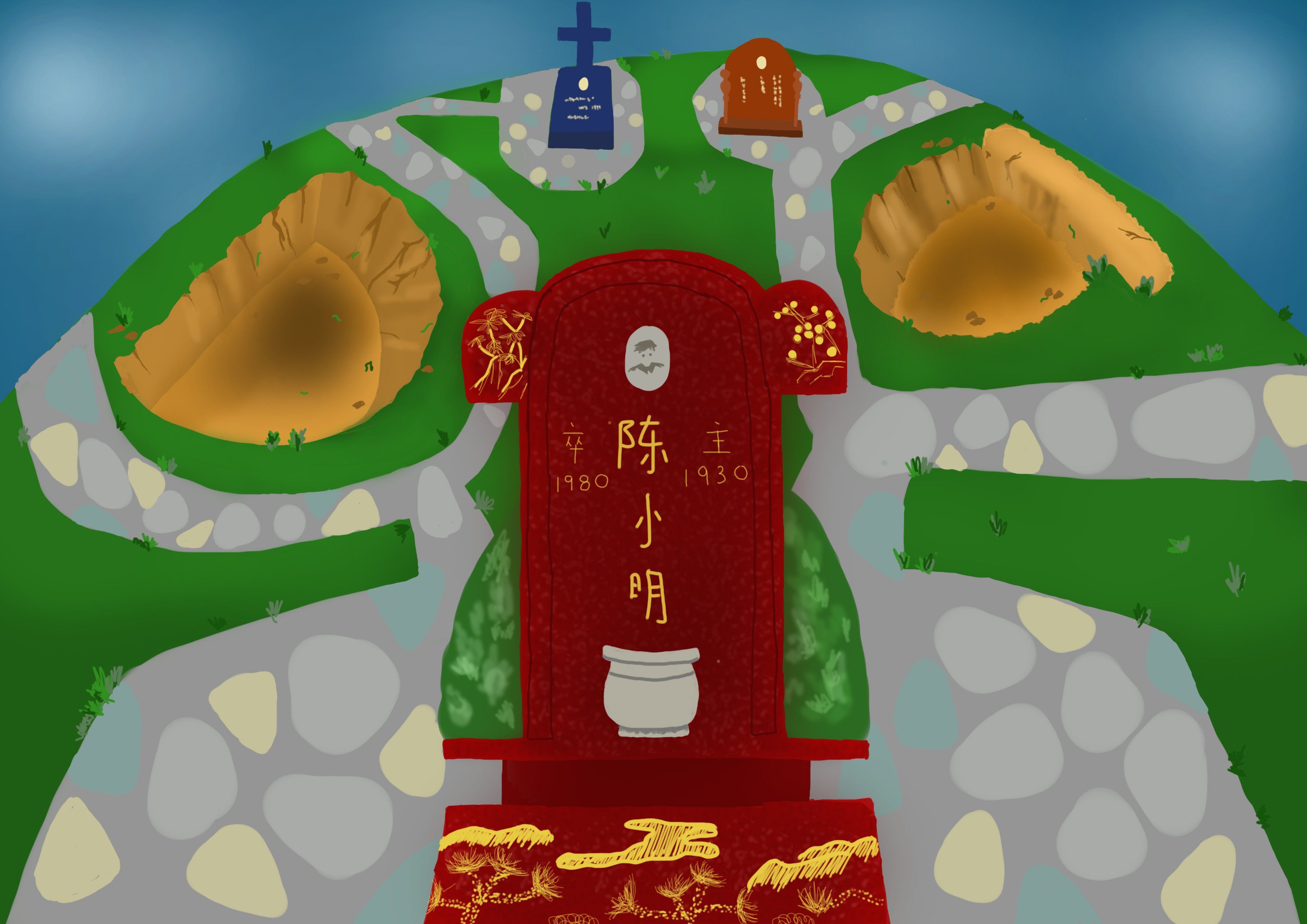 If I had more time, I would have added a pair of hand working on the tombstone because I want to further emphasise that it is a dying trade but has not been totally faced out yet.

According to https://pride.kindness.sg/millennial-fishmonger-hopes-keep-wet-markets-alive/, this occupation is fazing out because of its unglamorous side- having to deal with smelly fish guts, and it being a laborious job.

This piece was rather successful in the translation from sketch to the final piece and the message was driven across clearly because the strokes mainly centralised and gathered on the focal object of the chopping board. 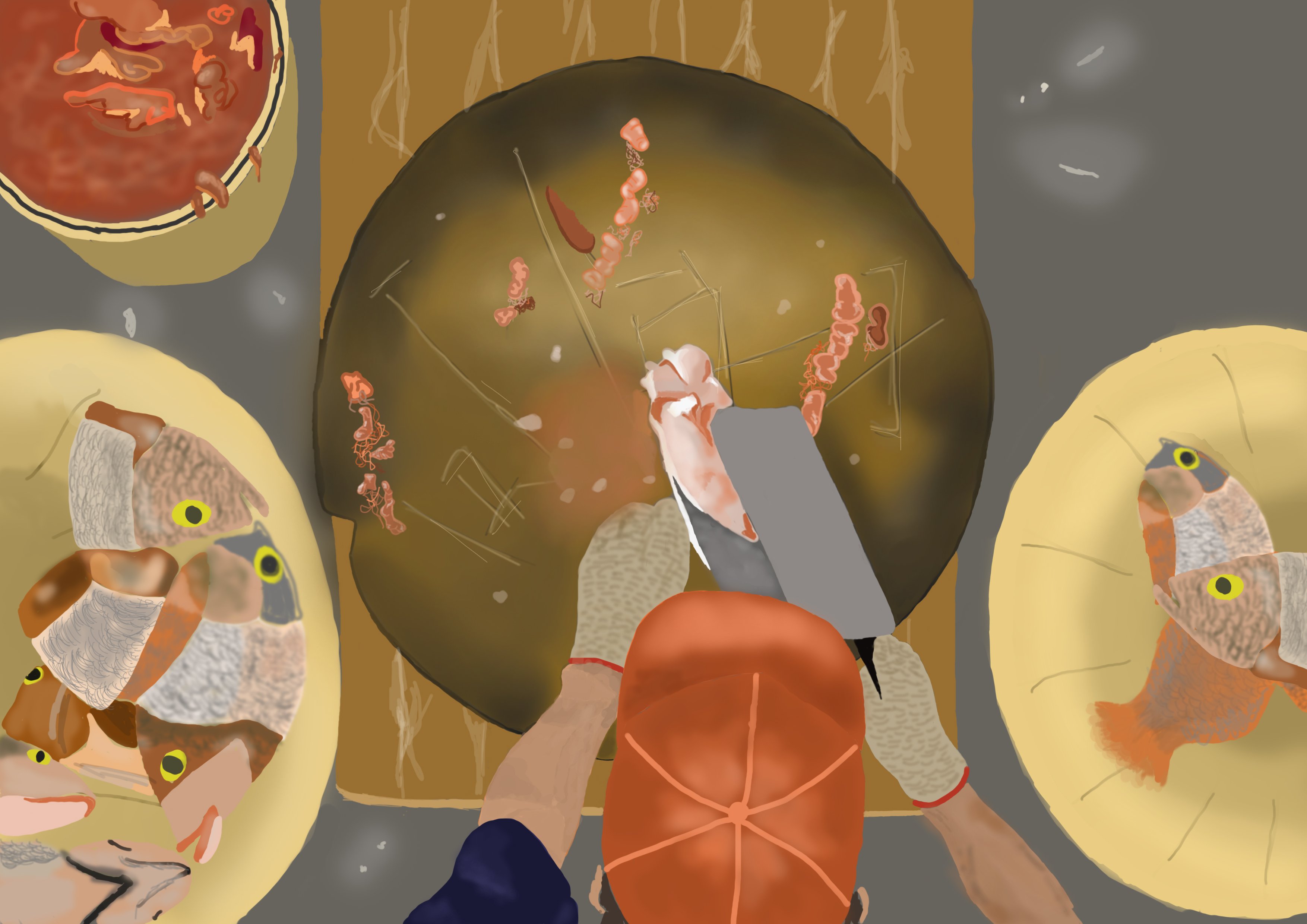 There was a few reasoning on why I felt that this occupation was going to die. 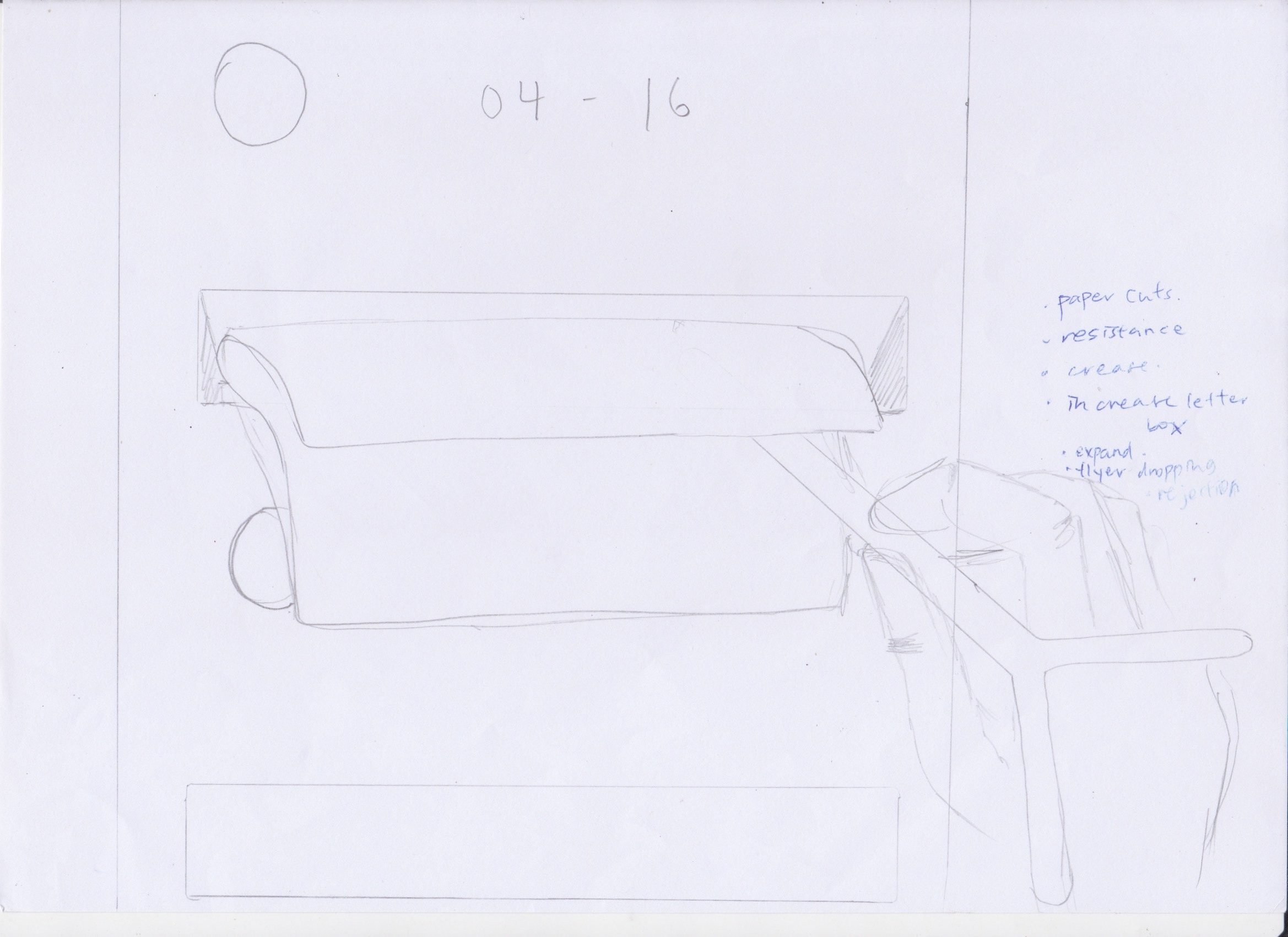 The initial layout was a very tight scene of how the flyers were inserted because this takes a lot of resemblances of the ice cream man layout. However, upon consulting joy, the composition was too tight, it was not able to portray whatever I wanted to show behind my message. Hence, in my final it shows a shift in perspective.

I utilised my initials ‘H’ ‘Y’ and ‘D’ because I felt that these 3 alphabets had 2 different characteristics. ‘H’ felt very rigid because of the straight lines hinged at the middle , whereas ‘Y’ and ‘D’ felt more liberty because of the curves to it.

Hence, in order to exploit this, I left flyers in stuck in the letterbox in the arrangement of ‘H’ whereas those that flew out was in the shaped of ‘Y’ and ‘D’. 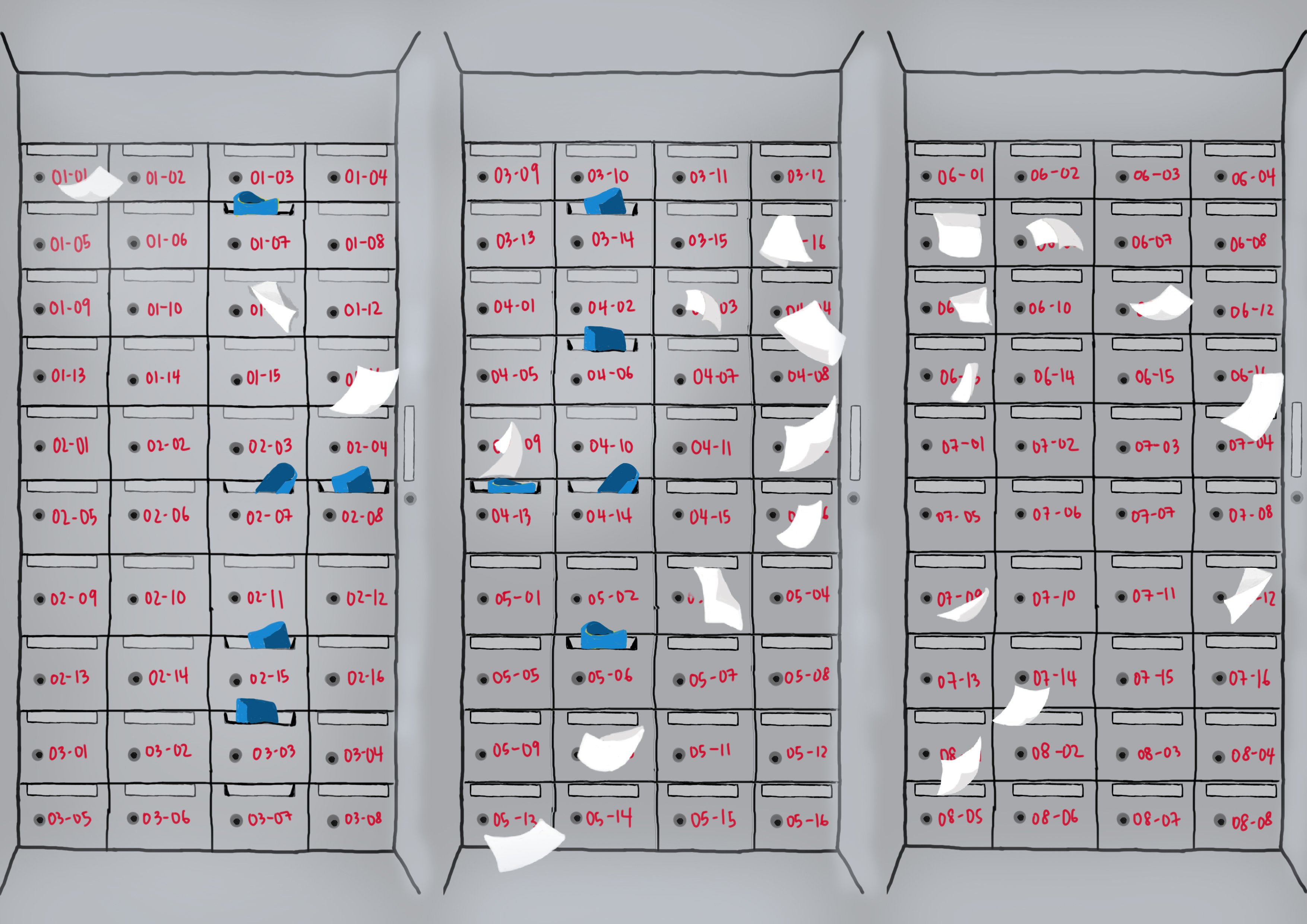 If I had more time, definitely would have worked on textures and also to work the human hand aspect in as well with the same reasoning as the previous. 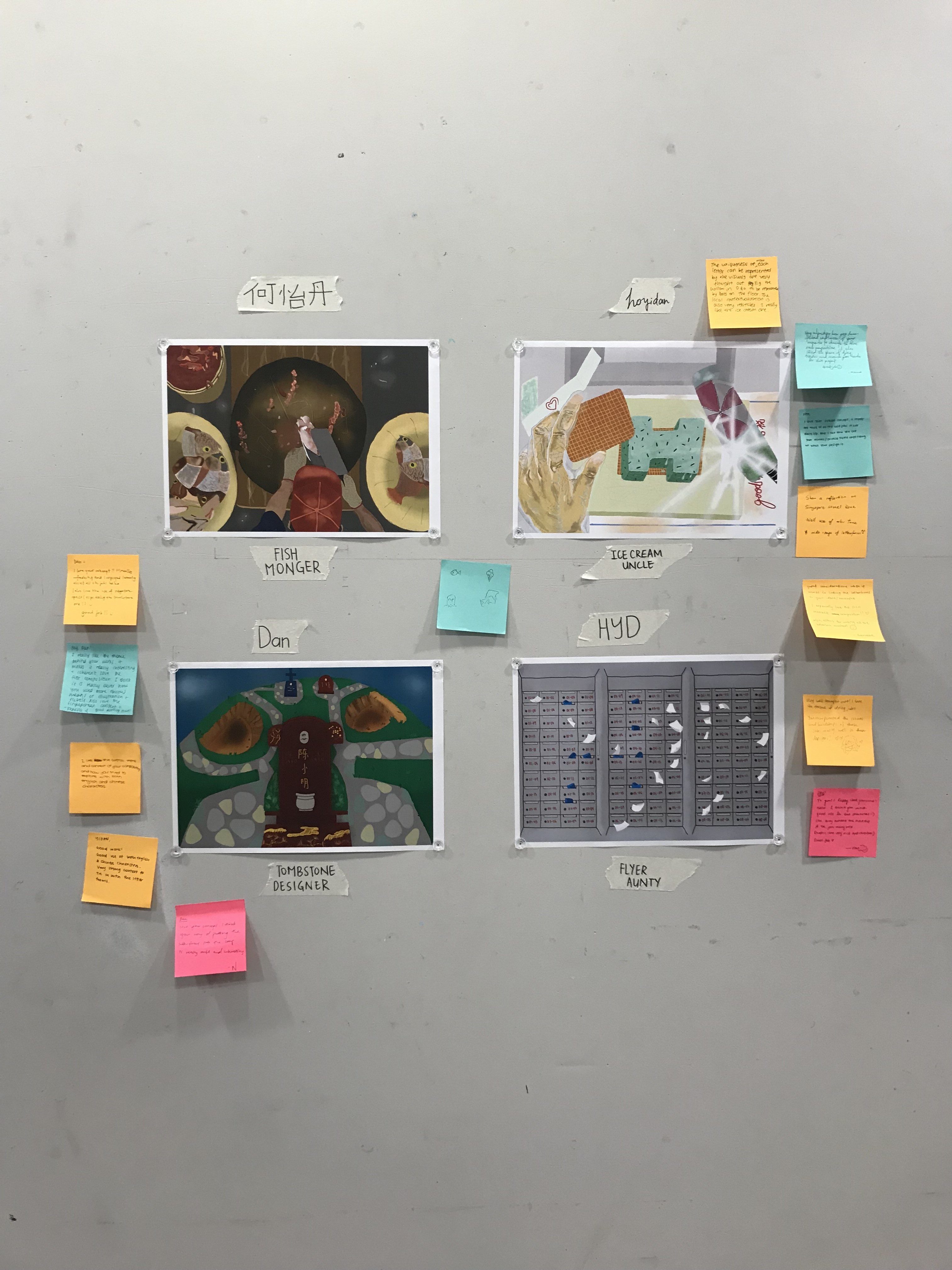