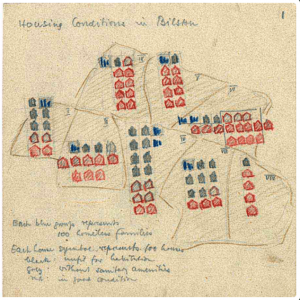 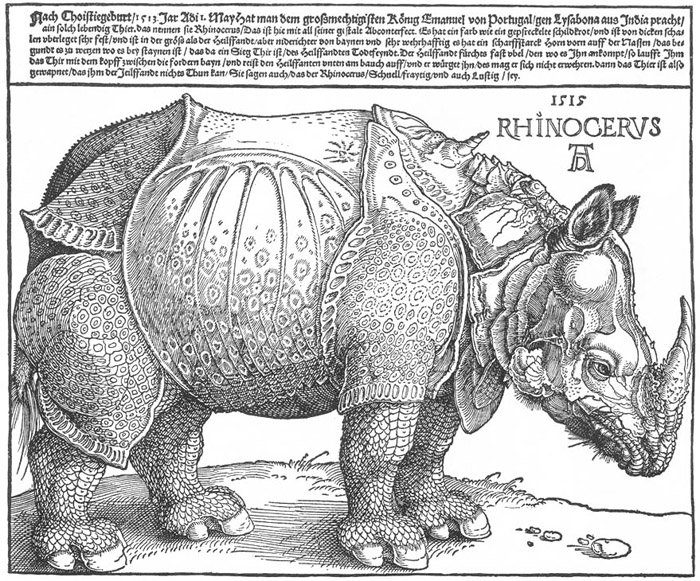 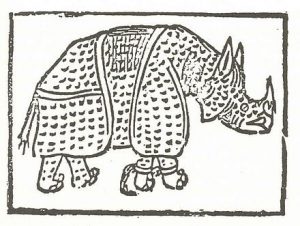 The above are notes I organised according to my own understanding for Week 3. 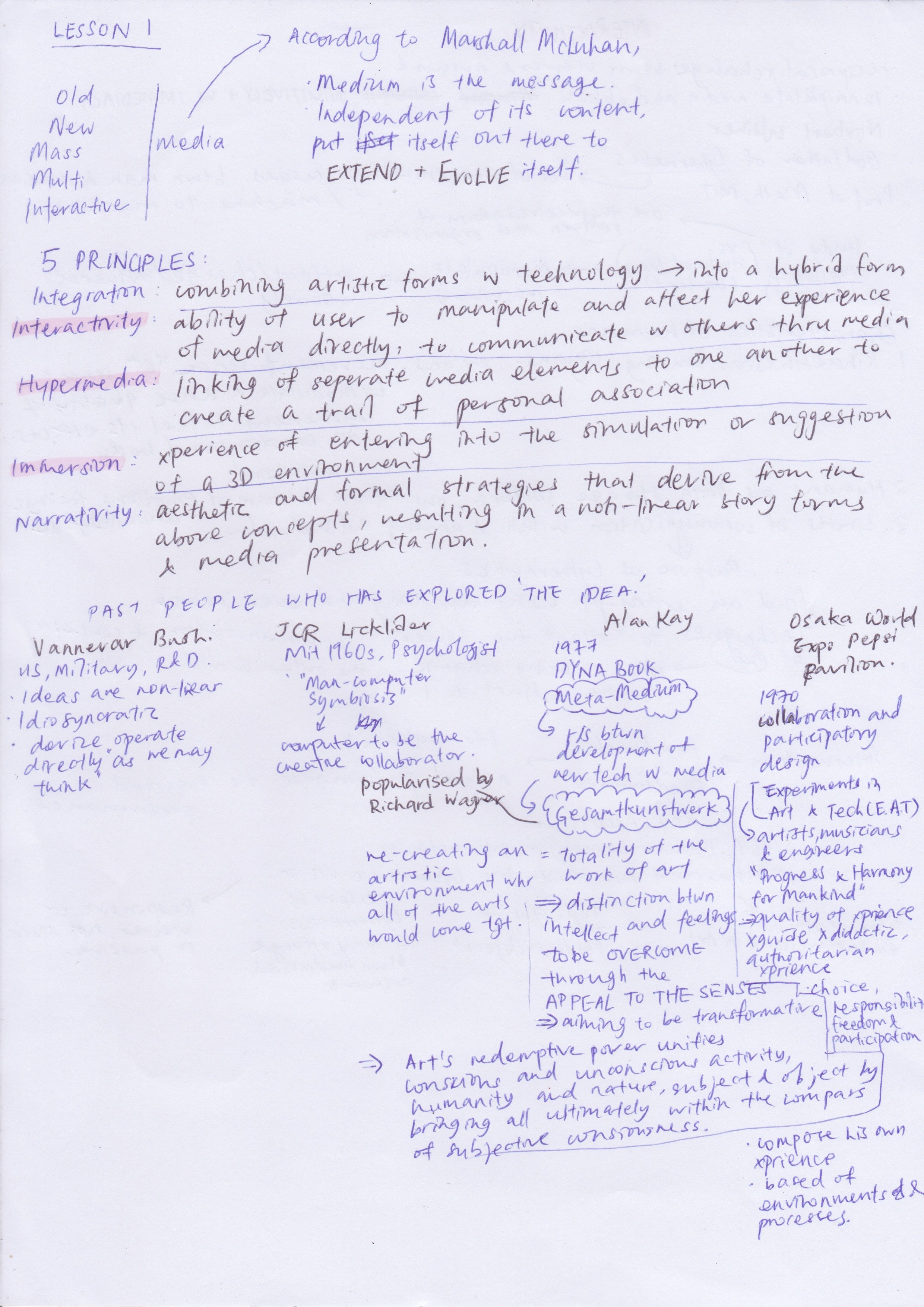 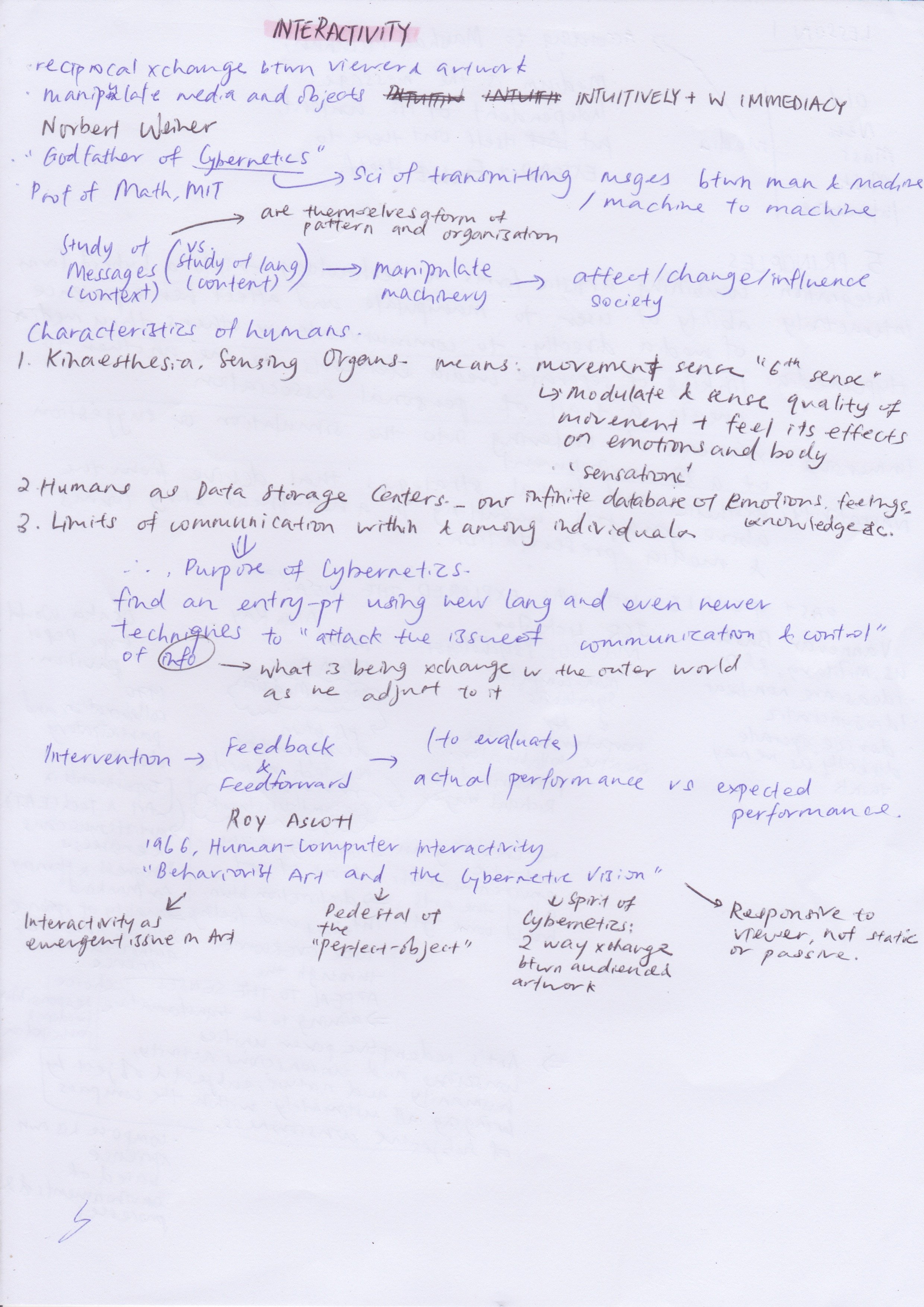 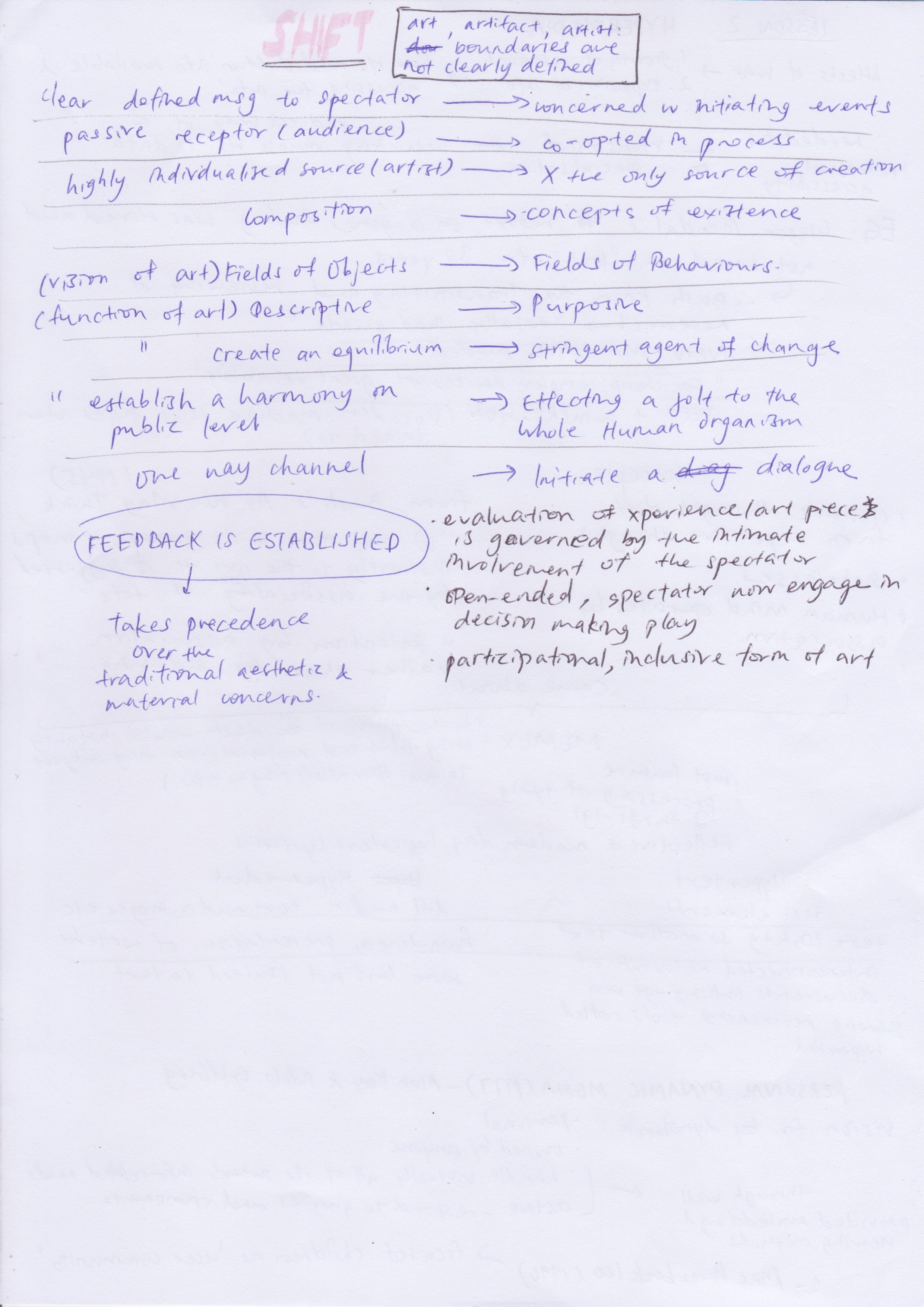 Essentially, what I took away from this particular lecture is that the power of interactivity has given spectators a greater ability to meaning make during to their involvement with the art piece. Based of their own experiences and their background, they would be able to evaluate and draw the content out to what is more palatable to them. However with that said, I believe that this does not compromise on the aspect of ‘challenge for change’ that interactive pieces aim to achieve. Instead, by involving the spectator into the art piece, it would have indirectly made them the medium of the message, and with that taking precedence over the traditional aesthetic and material concerns, I would see that the purpose of the art piece would be felt at a deeper level, one that resonates with the spectators. With that, then would I think that the spectator would be convicted on their own accord to initiate dialogues to be agents of change.

This was initially an idea that I wrestled with. Considering that there are still people who could not accept such a form as art, should we still push for such works and continue to cater to the mass? After hearing the class response, where it is only through the continuation of producing such works that people would come to learn and appreciate ‘interaction’ in art, that allowed me to see the broader picture of ‘interactive’ art. ‘Interactive’ art of itself is a notion of change. We are entering grounds that challenges the roles of artists, artefacts and art, grounds where art is responsive to viewers and no longer just static or passive, grounds where there are non predictable outcomes. This in and of itself is a cultural change or challenge to influence society. 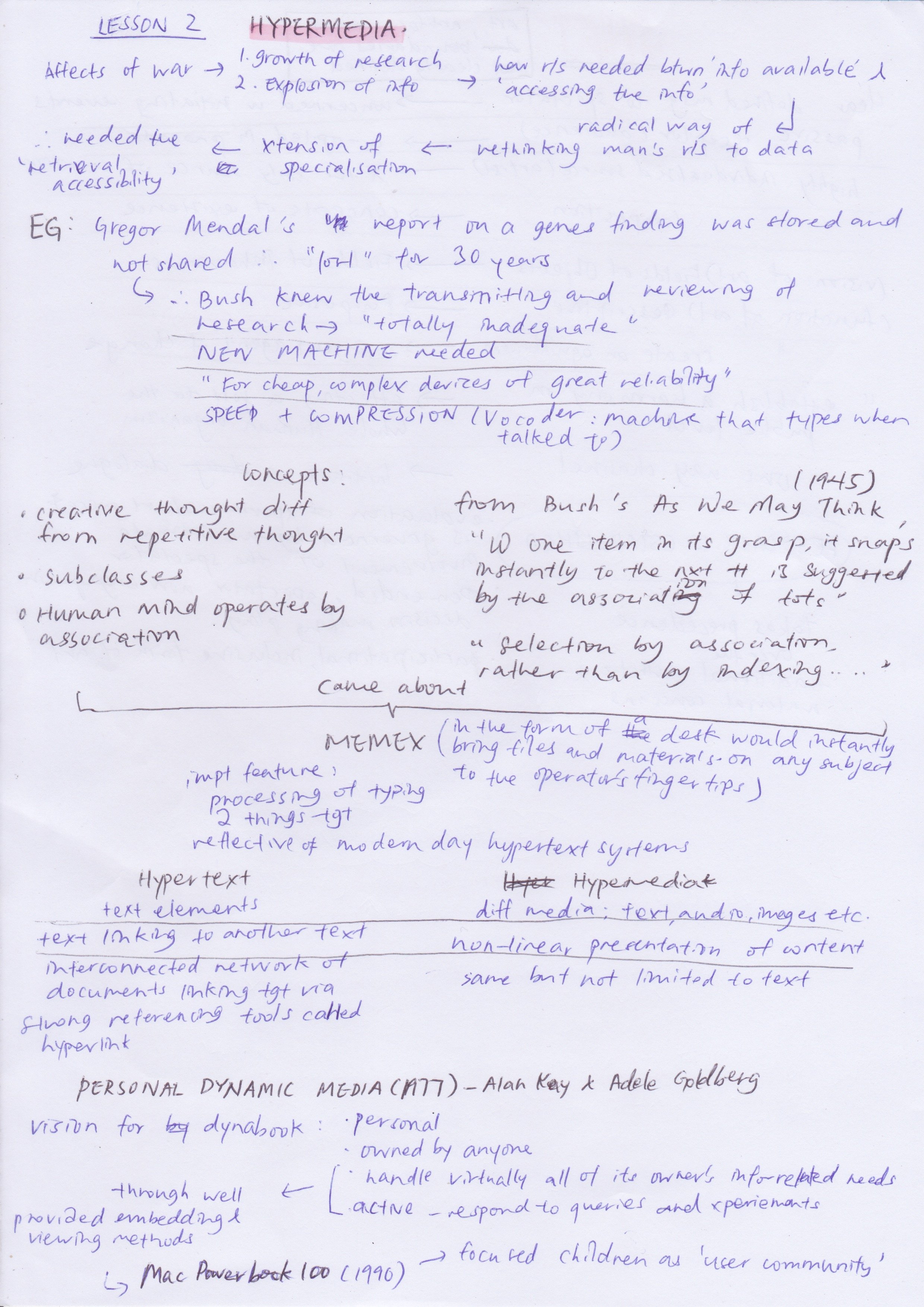 The above are notes I organised according to my own understanding for Week 4.

During the lecture for hypermedia, I actually felt very frustrated because I could not see how what I was learning benefitted art, instead of it not just being another milestone in the technological research department.

After going through the content again, I was drawn to the phase ‘create a trail of personal association’.  Hypermedia acted as points in which aided for spectators to come up with their own narration while on “free” exploration. By distributing various media points throughout the art work, this is actually a construction of an alternative art experience in which it explores the positioning of the spectator, contributing to a vast collection of diverse perspectives.

To me, this draws parallel to labyrinthine narratives where there is a sense of ownership and hence a sense of involvement. With the element of choice, this aids the process of making ‘personal associations’. After all with the human mind operating by association, more than anything else, I am sure with hypermedia, engagement is guaranteed. 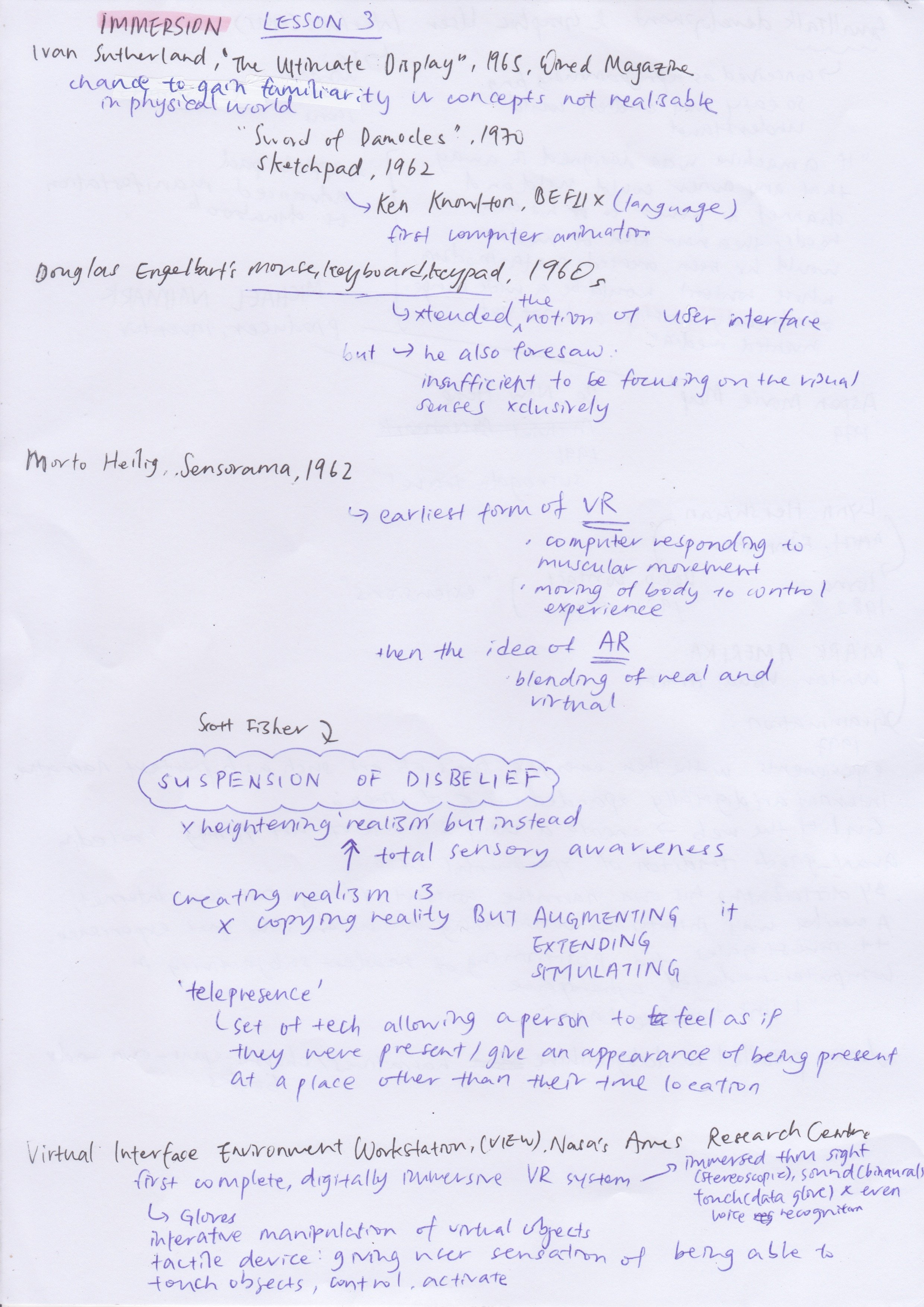 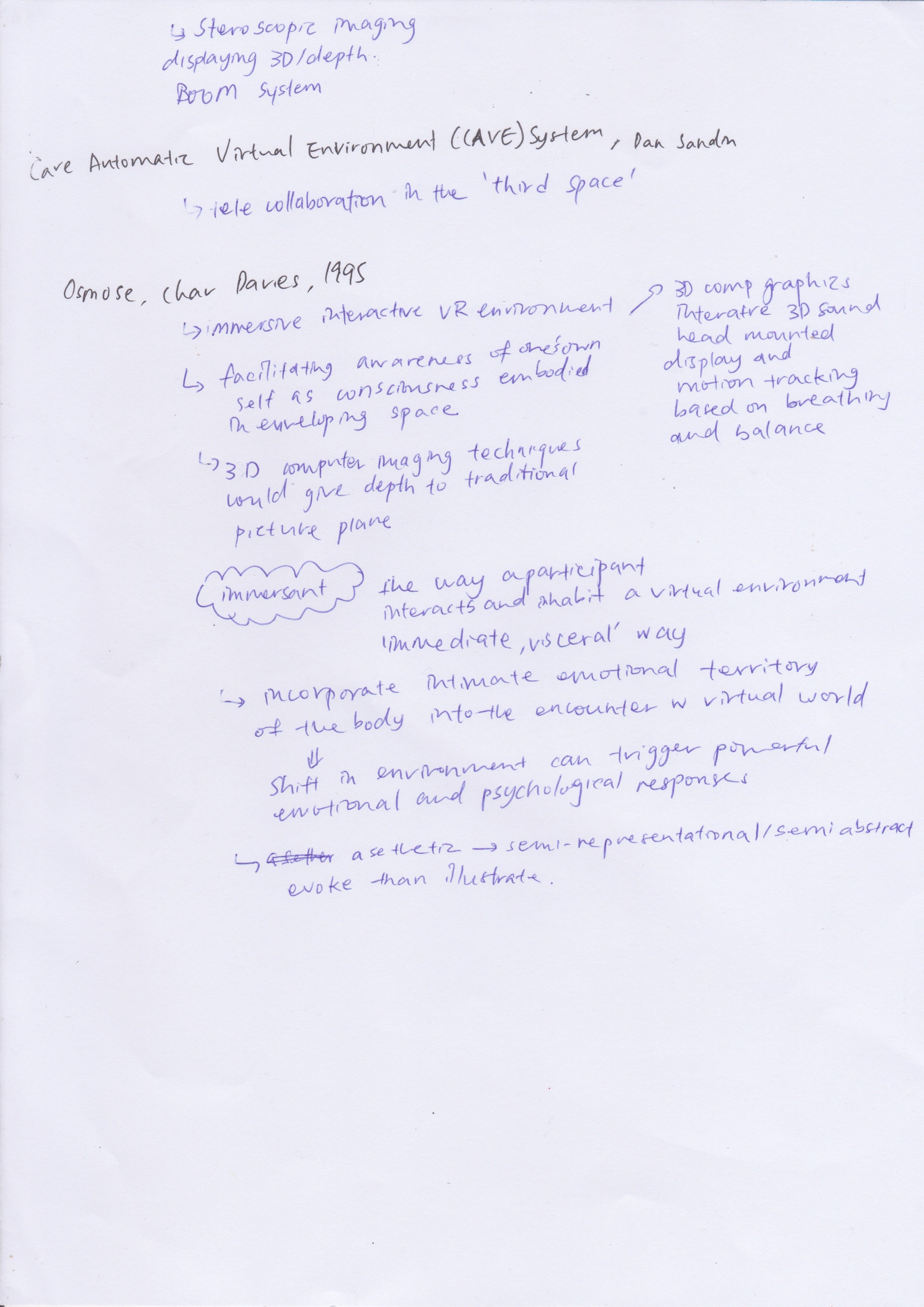 The above are notes I organised according to my own understanding for Week 5.

I. COULD. NOT. STOP. THINKING. ABOUT. STRANGER. THINGS. I easily understood this lecture because I kept thinking how a ‘immersive parallel environment’ was just like The Upside Down in the show. Just like how The Upside Down resembled the actual world but was instead a ‘darker’ place with the veins and the slime, AR doesnt aim to copy reality but instead to augment, extend and stimulate another environment.

The concept of ‘Suspension of Disbelief’ really blew my mind. Immersive works really just has the power to overcome the distinction between intellect and feelings through the appeal to our senses. This raise in sensory awareness to provoke emotions in my opinion is honestly a genius idea. Too many times, I have heard someone saying they would not believe a certain something something unless they were there/ have seen it with their own eyes. (Almost like how Jonathan didn’t believe his mother about Will’s presence) Hence, with an immersive interactive environment, not only will in aid the spectator in believing the message but even the significance/ severity would literally be felt.

Personally, I think that the idea of the third space being more of a bridge between the physical and the psychic, instead of trying to be latter, in itself acknowledges the differences between the both and while at it, provides the communal spaces for various spectators to come together share this new ‘reconciliation’. Drawing back to ‘Ready Player One’, this would be like how the different characters could adorn new avatars to share a space together despite coming from different backgrounds. This is very important in helping one to loose themselves from the previously mentioned ‘intellect’ and then to trigger powerful and emotional psychological responses.