Before Bin started on his presentation, upon hearing the title ‘Automated utopia’, the first imaginary that popped into my mind was humans not having to move at all and everything- like EVERYTHING was controlled by robots. We would literally only feel one emotion, which was happy, because literally we didn’t have to do anything and that’s just perfect.

After hearing Bin’s lecture, this imaginary has morphed drastically but more importantly, why?

The main takeaway I had from the lecture was how emotions can actually be conveyed through AI, through technology. Personally, I think I have limited my imagination of AI to certain areas. In my head, they are only prominent in warfare, in health diagnostics, basically, the “boring-stuff”. However, through his lecture, I came to realise that there is a lot of deeper questions to the existence of AI and the emotional sentiments behind this topic.

The first piece I am going to talk about that struck this chord was Doomsday Book’s The Heavenly Creature.

This film centers around a robot repairman who was sent to a buddhist monastery, who have seemingly achieved enlightenment due to his inherent lack of human flaws. But one thing that got me thinking is that no one ever mentioned that he was a robot in the film even though he looks so distinct from everyone else and also most characters (except the manufacturer and technician) treated him as if he was just like them- human.

So… is he life? Bin posted this question to us: what does it mean to be a life and have existence? does it limit to a physical body? It seems me that humans have been too used to having every emotion we can think of seemingly associated with a facial expression but Bin challenges us to think further- maybe robots and humans have a kind of  symbiotic relationship where AI could potentially help to achieve human true potential, no longer have to struggle over more laborious job and allowing us to be more introspective.

This reminds me of a movie, Baymax.

Baymax is an inflatable robot to serve as a personal healthcare companion to Hiro Hamada and they both share a comradeship that goes beyond, as seen in the ending.

*get ready for spoilers*

At the ending, Baymax and Hiro enter into a teleportation portal to save a girl who had been trapped in there for a long time and, just as they are about to leave the portal before it closes down forever, with the girl in hand, debris hits Baymax and he lost his abilities to fly.  In, perhaps, the saddest moment in Disney history, Baymax tells Hiro that he can use his rocket fist armor piece to get Hiro and the girl to safety, but Baymax cannot fly any longer, so he will stay behind.  Then, the killer moment, Baymax asked Hiro to tell him that he is satisfied with his service so that he can power down. Which. He. Did.

This to me foreshadows the emotional aspects that AI can bring out, which Bin is trying to suggest. Baymax, the robot, gave his all to his owner even though it meant he could ‘die’. Yet, knowing that Baymax is a robot and is not life, still makes this such a sad ending? Also, to add, the nature of technology, it almost seem as if the robots always give and the human always benefits.

The second piece that made me realised there are emotional qualities in data is the piece by Alexandra Daisy Ginsberg, the Substitute.

This piece explores a paradox: our preoccupation with creating new life forms, while neglecting existing ones. A northern white rhino is digitally brought back to life, informed by developments in the human creation of artificial intelligence (AI). Based on research from AI lab DeepMind, the rhino performs as an artificial agent, an autonomous entity that learns from its environment. A life-size projection, 5m wide, shows the artificial rhino roaming in a virtual world, becoming more “real” as it comprehends the limits of the space.

This sensitive use of data got me thinking- how does one truly feel? Why is it even though we know and can see that a rhino is being formed out of pixels, we still feel for the rhino? My theory is that the pixels may not be able to relate to us but yet this technology is able to output a theatrical experience that help us feel.

I like to draw a parallel to the piece ‘‘We Live in an Ocean of Air’ which was first showcased in Dec 2018 at the Saatchi Gallery, London.

The motivation behind this piece is to reconnect humans with nature by showing the invisible, by materialising the symbiotic relationship with the plant kingdom.

In this VR space, we would be able to enter the tree in which we will see vast flow of forces of a living tree, and how the tree survives. But of course, what we see is just a figurative representation of ‘photosynthesis’ and this is not how photosynthesis actually works.

But as mentioned in the book “ways of seeing” even though what we see might not be objective facts, but the testimonial value makes images extremely powerful. It was actually noted in a report by Medium Publication that upon entering the tree, it looked very solid and in fact the writer felt an emotional resistance, which goes to show, the creators have successfully through VR managed to engage participants emotionally to reconsider their position in relation to the plant kingdom. It provides an alternative platform to view the challenges our planet faces in the 21st century and helps us reflect on our dependence and responsibility to the organism we share the earth with, through the help of technology.

In conclusion, just as we created the bucket because our hands cannot carry water, and the wheel because our legs are imperfect, I believe we might one day rely on AI to help us express our feelings, which we technically already am with these artworks are fore-runners to my claim. Currently, technology simulates our visuals, and our hearing but have yet to reach the stage where all our 5 senses are engaged. I believe when this happens, maybe then we might be close to the idea of ‘Automated Utopian’. We might not only be able to communicate ideas we choose to bottle up, or be able to decipher when another is feeling sad, but also AI could help simulate world beyond the limits of human perception.

This reading makes it very clear that at the core of every video game is essentially a program, a set of code.

I was impressed by how the author uses various characters, such as the violent 13 year old girl who lost her game at the cafe and was insanely rude to the owner, Jarish, the boy with a unique name that meant nothing and has divorced parents, Marty, who seems awkwardly competitive online considering he is a 29 year old economist, Jimmy who is a total superstar online but only to mask his birth defect that has left him with an awkward gait and slightly slurred speech and many more, to protray how the computer has have such a holding power on everyone from all walks of life. Not just that but also, how the computers holds onto each one is presented differently showing the diverseness of the computer.

Through Jarish, the author presents how video games have this power of complying with one’s imagination. ‘New programming techniques offer the hope of creating characters who have more specific and interesting personalities.’ Author goes on to mention that Jarish was someone who would buy books which taught him to hack into games to modify and also disliked games in-built to cartridges because he had no access to the underlying program. This reminds me of an argument made by Lev Manovich:

Thus, hacking and adding to the game became its essential part, with new levels widely available on the Internet for anybody to download. Here was a new cultural economy which transcended the usual relationship between producers and consumers or between “strategies” and “tactics” (de Certeau): the producers define the basic structure of an object, and release few examples and the tools to allow the consumers to build their own versions, shared with other consumers.

This is the basic fundamental which led to the creation of some of the most popular contemporary video games. An example would be: Counter-Strike. Counter Strike is actually a highly successful modification(aka ‘Mod’) from a PC first person shooter(FPS) game Half-life.

So what was being modified?
Counter Strike was not the first mod that the creator worked on, in fact it was his third version. This one modifies the multiplayer aspects of Half-Life to bring to it a more team-oriented gameplay. It is team-based featuring one team playing the role of the terrorist and the other team playing the role of the counter-terrorist. Each side has access to different guns and equipment, as well as different abilities. Its maps also have different goals such as: hostage rescue, assassination, bomb defusion, terrorist escape, etc. This new implementation of sophistication started off as a hobby project and yet now, the creator said ‘Counter-Strike probably helped the industry see FPS games as a potential for esports’

The creator also mentions that his biggest takeaway was that developers shouldn’t be scared to change things in the game, even if users aren’t on board straight away. This draws parallel to the reading, which writes the possibilities seem limitless if such marvelous things(in reference to Jarish accidental snow effect by just erasing one line of code) can happen by chance.

To read more on the creation of Counter Strike: 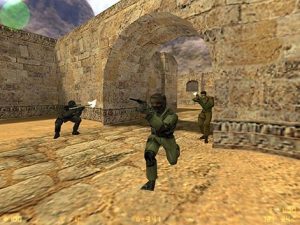 The original Counter-Strike mod was launched in 1999

For me personally, I found this concept of ‘the-essential-core-of-a-game-is-code’ appealing because it presents sort of a paradox. Knowing that video games are a database of codes and scripts, it’s interesting how something so systematic, so rigid is available to help facilitate and map out our infinite imagination and creativity. With that, does not not mean the player and the game share a sort of cybernetic relationship?

Considering the need for interdependence of the player and the game, games can only come alive through a feedback loop between the player, the hardware, the software, and the screen.

More than ‘interactive’, this brings the relationship to ‘cybernetic’ too. This loop and its need for continuity is in relation why the author describes Marty to feel ‘swept away and in control, to have complete power and yet lose himself in something outside when playing’ because it blurs out line that separates the players consciousness and game worlds.

Looking at it from the overview, video games is such a great representation of how and why computers have such a great holding power on us. The underlying algorithm, that is the fundamental of every game, is this deep structure that controls players reception and does it so cleanly. It introduces a switch from passiveness to a state of activeness within the player. By having the different elements of the computer to form a game, by having computer manifest itself this way, the player invests so much emotions from the demand of this powerful material, which suggests the intense power computers hold on us.