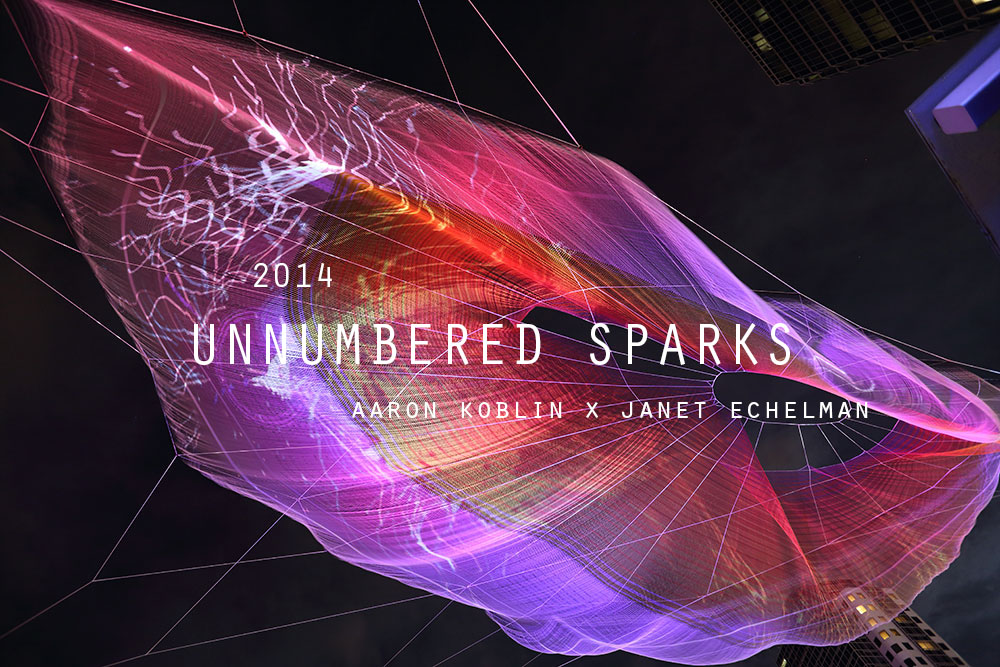 The artist that I will be talking about here is Aaron Koblin. He is best known for his innovative use of data visualization and work in crowdsourcing, virtual reality, and interactive film.

“So I think data can actually make us more human. We’re collecting and creating all kinds of data about how we’re living our lives, and it’s enabling us to tell some amazing stories. Recently, a wise media theorist tweeted: ‘The 19th century culture was defined by the novel, the 20th century culture was defined by cinema, and the culture of the 21st century will be defined by the interface.’ And I believe this is gonna prove true.”

A lot of his works is collaborative in nature, where people come together to create something, since more people will mean more data and more data will result in a greater story produced. In those projects, usually the engagement of the audience is highly crucial, making the audience the artists themselves. Without the audience, the project will not be. Literally, will not be. Some examples are the Johnny Cash Project and This Exquisite Forest, where he literally asked the audience to create the art itself.

In a sense, as the creator, he often only creates the platform and concept, leaving the creation of the actual “art” to the audience themselves. 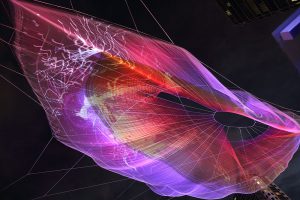 Aaron Koblin and Janet Echelman (an American sculptor and fiber artist) worked together to create Unnumbered Sparks for TED’s 30th anniversary in March 2014. Unnumbered Sparks, as quoted from Koblin himself, is a “monumental interactive sculpture in the sky”. 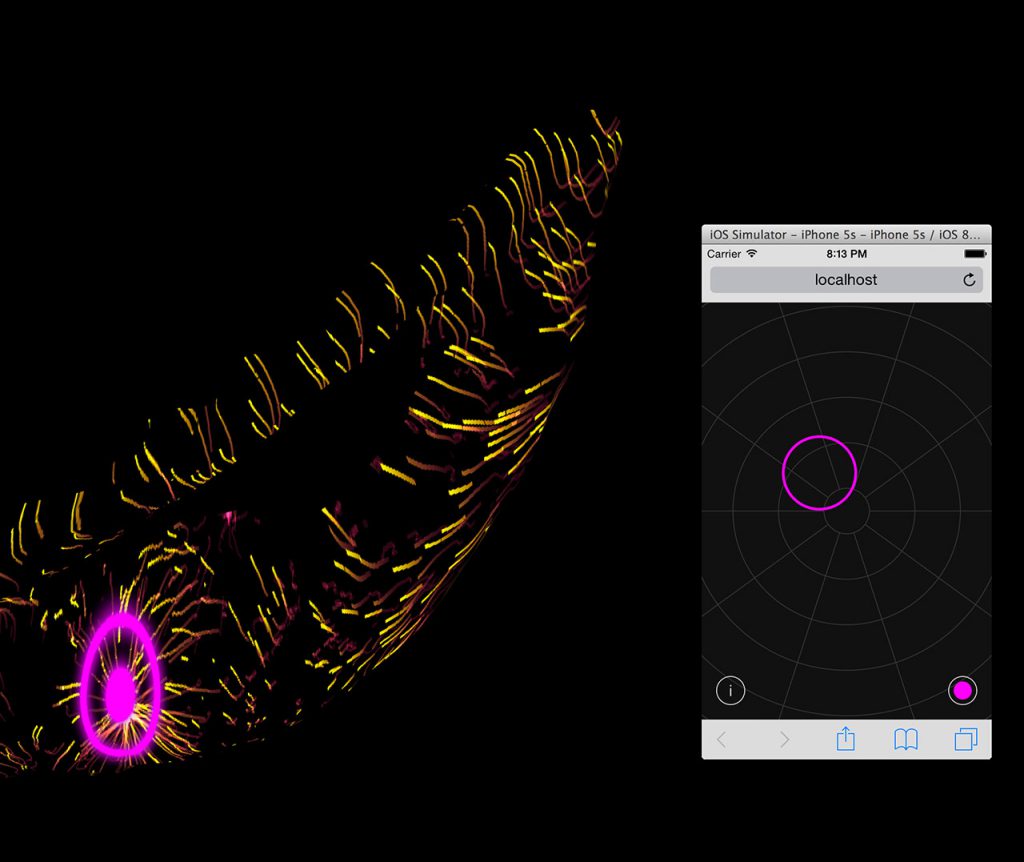 Basically, they created a massive net sculpture (745 feet long, or around 227 meters) and spread them from buildings to buildings across the sky in Vancouver, Canada. Five bright HD projectors will emit light beams onto the nets, which will result in shapes being projected on them, creating a stunning visual. The light beams were choreographed by participation from the audience, who could sign into a WiFi network created specially to connect to the program that controls the projectors. Signing into the WiFi would prompt the audience immediately to a website, which will display the nets. Audience could then touch the nets on their screen. It will correspond in real time, as the spots they touched will be translated into colorful light rings using the projectors. Those light rings will also “interact” with the other light beams projected on the nets.

Unnumbered Sparks relied heavily on the programming, with a lot of elements relying on each other in kind of a relay to create the final outcome.

“The lighting on the sculpture is actually a giant website. It’s one huge Google Chrome window spread across five HD projectors. The content is being rendered in WebGL. It uses Javascript and shaders to render particles and sprites based on user motion, which is transmitted from mobile browser to our rendering browser via websockets. There are a lot of moving pieces here, from the local area network to the server (written in Go), to the sound system (also running in Chrome with Web Audio API) all the way through the LED light control system, which pulls pixel data directly from the browser.”

Honestly, reading that, I am not sure of what is going on since most of the terms is unfamiliar to me. What I could gather is that the program, or the “language”, is constantly being translated to something else until it reached something that could produce the expected outcome.

Due to that heavy dependence on computational parts, I think it’s safe to say that Unnumbered Sparks falls within the New Media. However, while programming is crucial, there is another part to this installation: the nets. The creation of fiber nets itself, I believe, is more within the Old Media and I think it is “artistic” enough to be considered an art by itself, even without the light beams projection. The nets didn’t just function as a screen for the light beams, but rather, adding variability to the visuals. The choice of material and crafting method affected how the nets will behave under different circumstances, i.e. weather conditions. Imagine if they used a simple screen or just project the light beams onto a wall; it won’t be as beautiful.

Unnumbered Sparks has a high entropy—the possibilities of the visuals created are endless, since humans’ behaviors are unpredictable. They can create spots wherever they like. In addition, the net itself is constantly changing, allowing the visuals to be projected to different dimensions. Different number of audience would produce different results as well—there are so many aspects that contribute to the variability.

I thought that Unnumbered Sparks doesn’t possess high automation at first; however, I then realized that there is still certain artistic visuals portrayed even without the participation of the audience; it’s just not as varied, but it will still be pleasing to the eye.

The machines (in this sense, the projectors) give immediate feedback with regards to the inputs, which are the spots pointed by the audience on the screen of their mobile devices. However, the feedback itself is a programmed response. There is no memory—the machine will not change its feedback, regardless of time or condition.

There is also a lot of communication between humans and machines, since the actions of the machines are always controlled by humans. There is also machine-to-machine interactions, as the program is constantly translated from the mobile device interface all the way until it reaches the projectors, which will create the light beams. I didn’t think there is any human-to-human interactions at first, however Koblin did say that he saw a lot of strangers started interacting with each other under the sculpture. I’m not sure if he referred to the interaction as something that caused the creations of the projections or something that is caused by the projections instead, but I guess in some level, there may be some human-to-human interactions.

What I think is interesting is the immersion. I think having massive nets hovering above the audience is interesting and effective, since it will immediately make anyone standing under the nets to feel “engaged” to the artwork, even before they are actually interacting with it. The effect will be vastly different if the lights are projected on a screen or a wall; it will not be as immersive, as it would seem more like a screening.

Unnumbered Sparks also can cater to the needs of a lot of people at once; the experience is not singular. In a sense, I can see where the human-to-human interactions may come from this; when you share a common experience, you usually can feel some kind of connection with others, even strangers. You can also see how the light rings you create interacted with others’, which is the whole point Koblin wanted to convey—engaging people, and letting them collaborate. However, I do think the interactivity is more prearranged than intuitive, as the audience has to be given clear instructions to sign into the prepared WiFi network.

I believe that Koblin is not an artist per say—but rather, a creator. He created the platform for people to collaborate, which corresponds to his goal (or his manifesto) of bringing people’s stories together, to create an amazing story. So maybe no, he’s not the artist to some of his works, but he is the creator, and his beliefs are always clearly conveyed in his creations. I think artists do not equal to creators, and that is fine.

Secondly, Unnumbered Sparks plays on light beams a lot and is placed outdoors, which will make it a highly different experience when viewed at different times, at different conditions. Is it a weakness, or an advantage?

I’ll have to say that it is both. At night, the visuals created by the light beams will be more visible, and hence more stunning, rather than when viewed during the day. Moreover, if it’s raining, it will be hard for people to look up to view it. However, it may be the attracting point as people will be interested to view it at different times (or probably just at the best time, at least). Moreover, some conditions such as the wind may also allow the lights to be projected to different dimensions and creating a whole new visual.