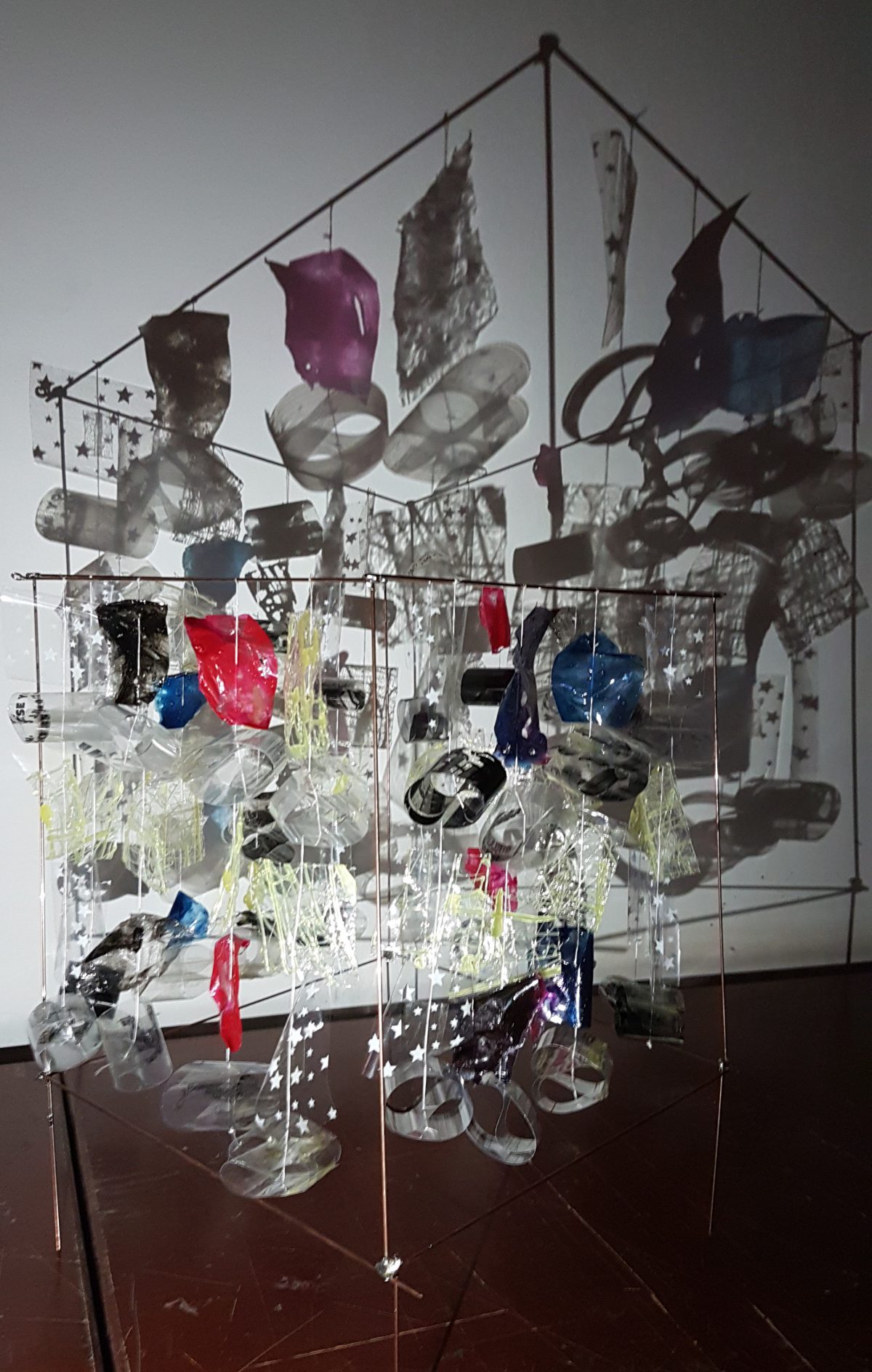 For this modular construction project, our group which consists of Queenie and I, created this lampshade cover (sort of). 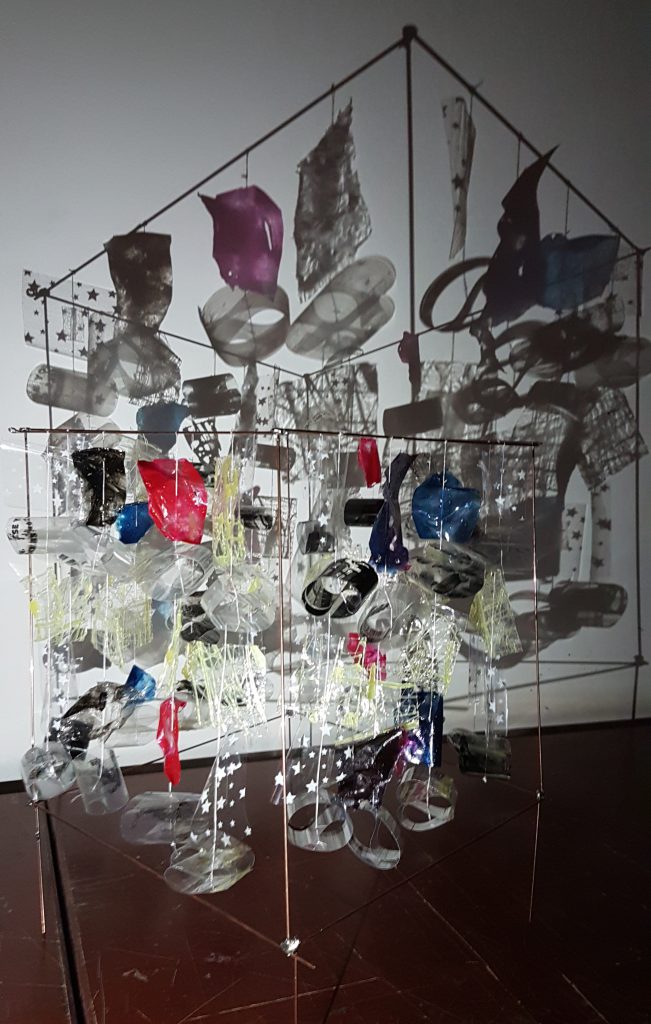 This modular construction is the amalgamation of our previous project on Morphogenic Construction. Queenie used the SEM of Leek and I used SEM of Dried Tears. 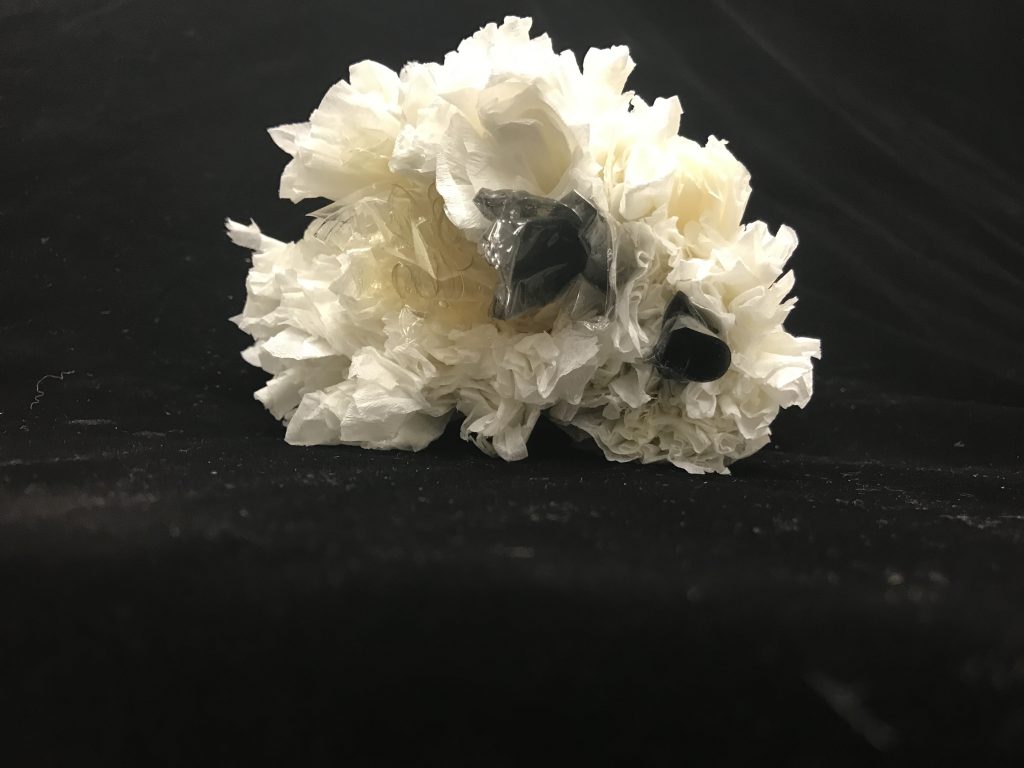 We obtained her construction’s highlights which were … 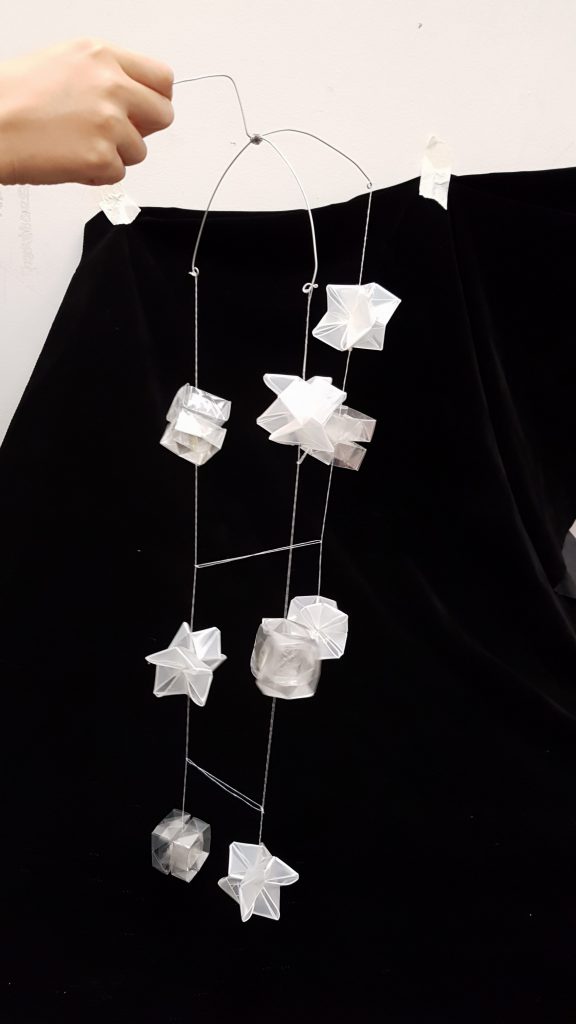 My previous construction’s highlights were… 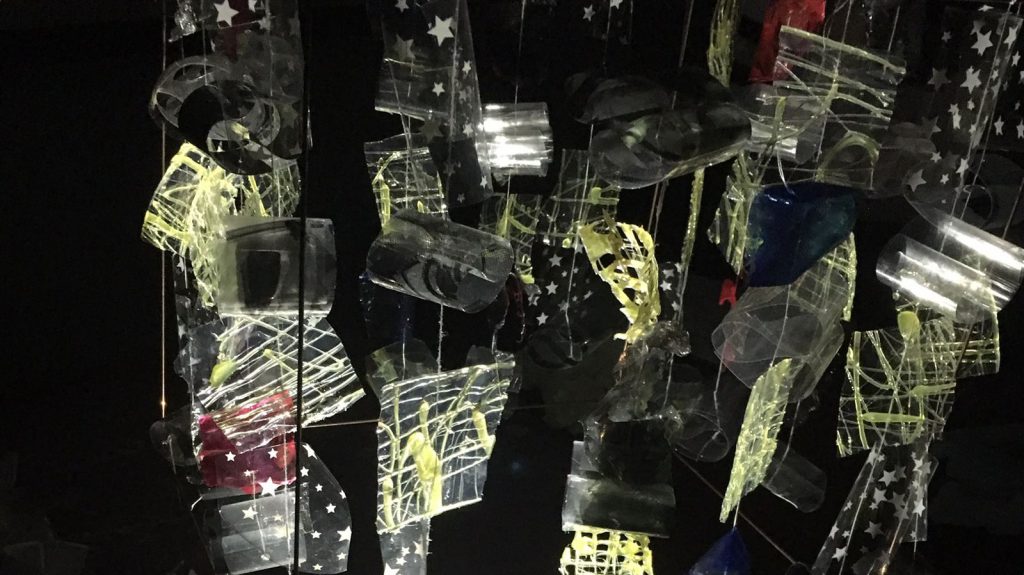 Units in each row are arranged in a uniform pattern.

Materials used for each unit are…

Colors, light and shadows are rather friendly. Rather interactive due to the mobility of each row. Each unit moves rather independently on it’s own in the air.

For this assignment, Queenie and I heavily focused on the light and shadow casted from our model, hence the physical exterior aesthetic aspect of our model is rather… ahem….

This is a video of how the light and shadow look upon changing the position of the light source: front and back, left and right. 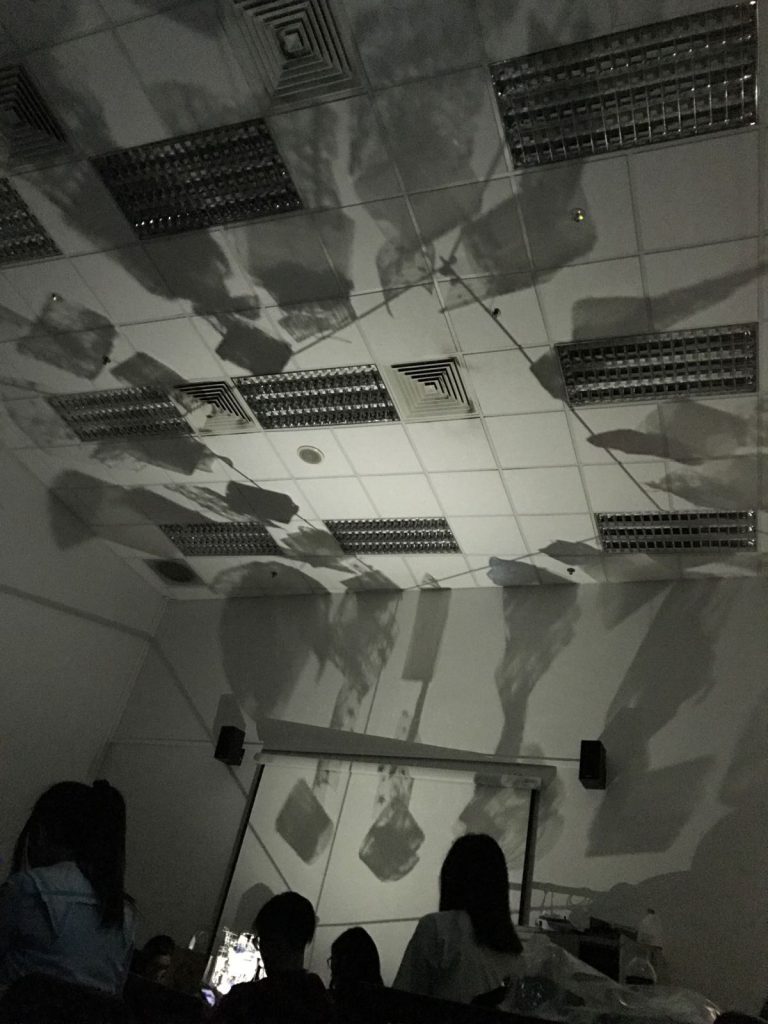 During presentation, our classmates were rather fazed –Queenie and I were rather surprised by the responses haha.– by the shadows casted on the ceiling and all around the room when we placed the light source (iPhone light) directly faced up on the table, in the center of the model. Yit Ling told me that she felt serene looking at our ‘constellation’ like shadows

Some of the pictures in class of our work were taken by Dawin and they were really pretty so we used them! Thanks Dawin!

Constructive feedbacks we’ve received from Mr. Peter and our lovely classmates were that we could actually hang our lampshade cover instead of having it on legs; and that letting it have uneven legs to give mobility or allow it to rotate like a musical box would make the shadow even more interesting on the walls and ceilings. 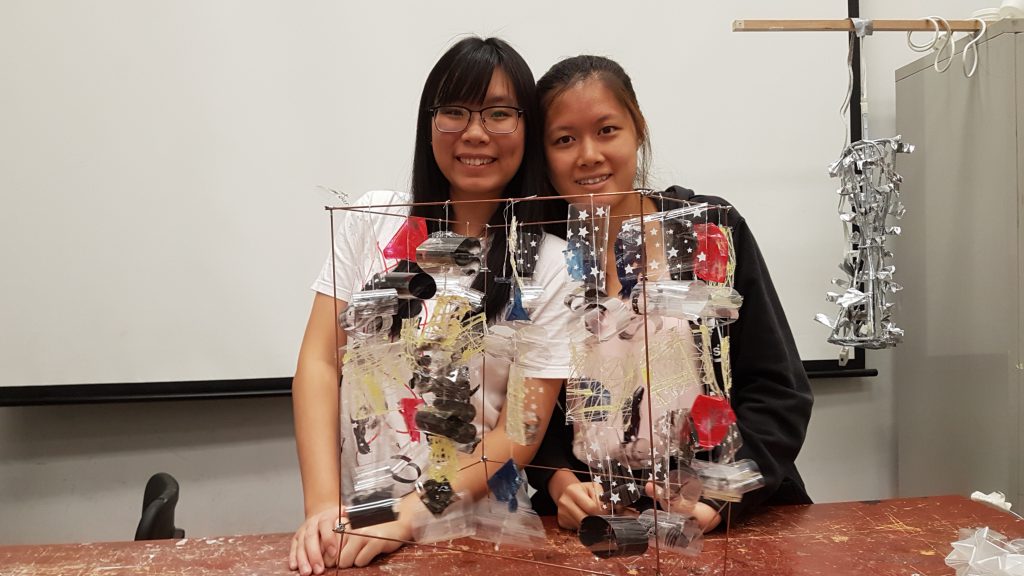 ‘Family Portrait’ of Queenie and my lovechi..I mean. BRAINCHILD. 😀 THANK YOU QUEENIE FOR WORKING WITH ME ON THIS PROJECT <3 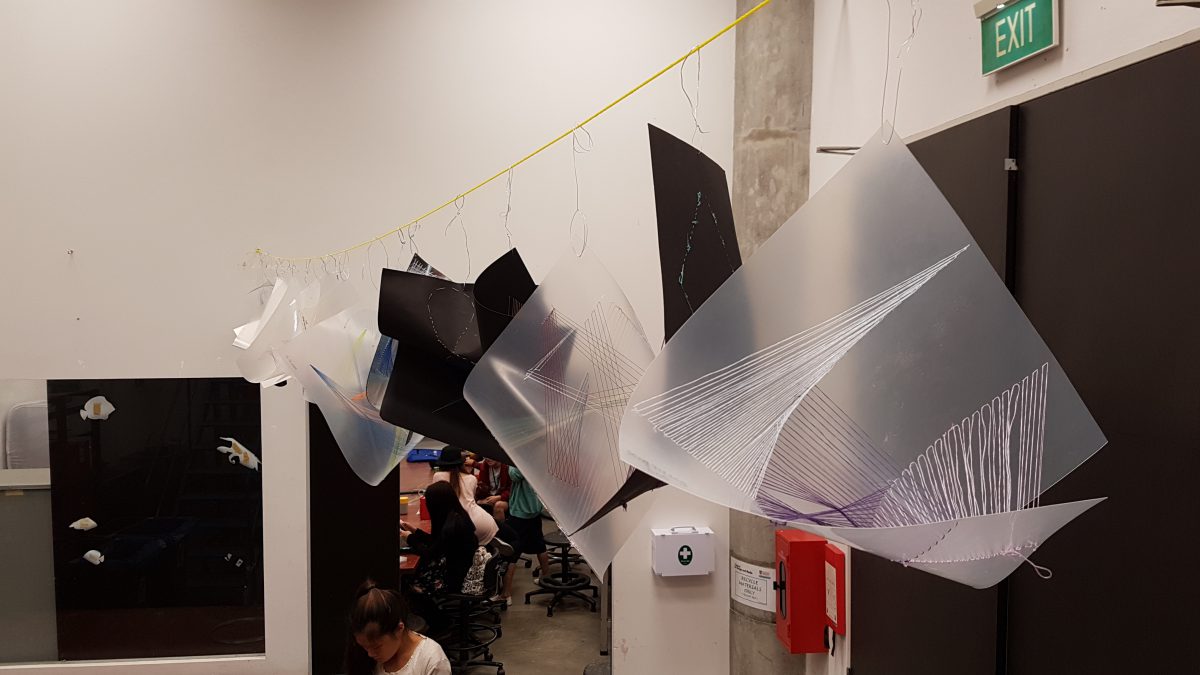 I believe most of us were really perplexed when our class got this project for assignment 2 (At least I was VERY perplexed). I wondered how was it possible to create 3D space with just planes?

I did some preliminary research regarding artists who did installations with strings and observed how people used strings to create art online.

And after much exploration online, I did my first model for the assignment.

Inspiration: Waves of the Ocean 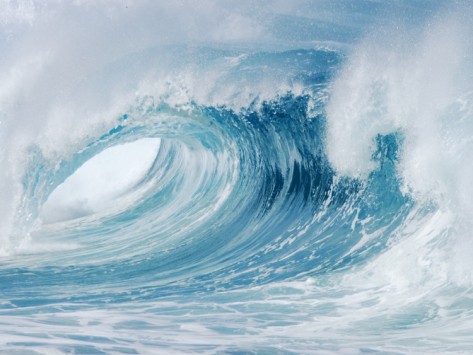 I was drawn by the crashing waves of the ocean when I first started sewing the paper because a certain amount of tension applied onto pulling the strings would cause the paper to bend. 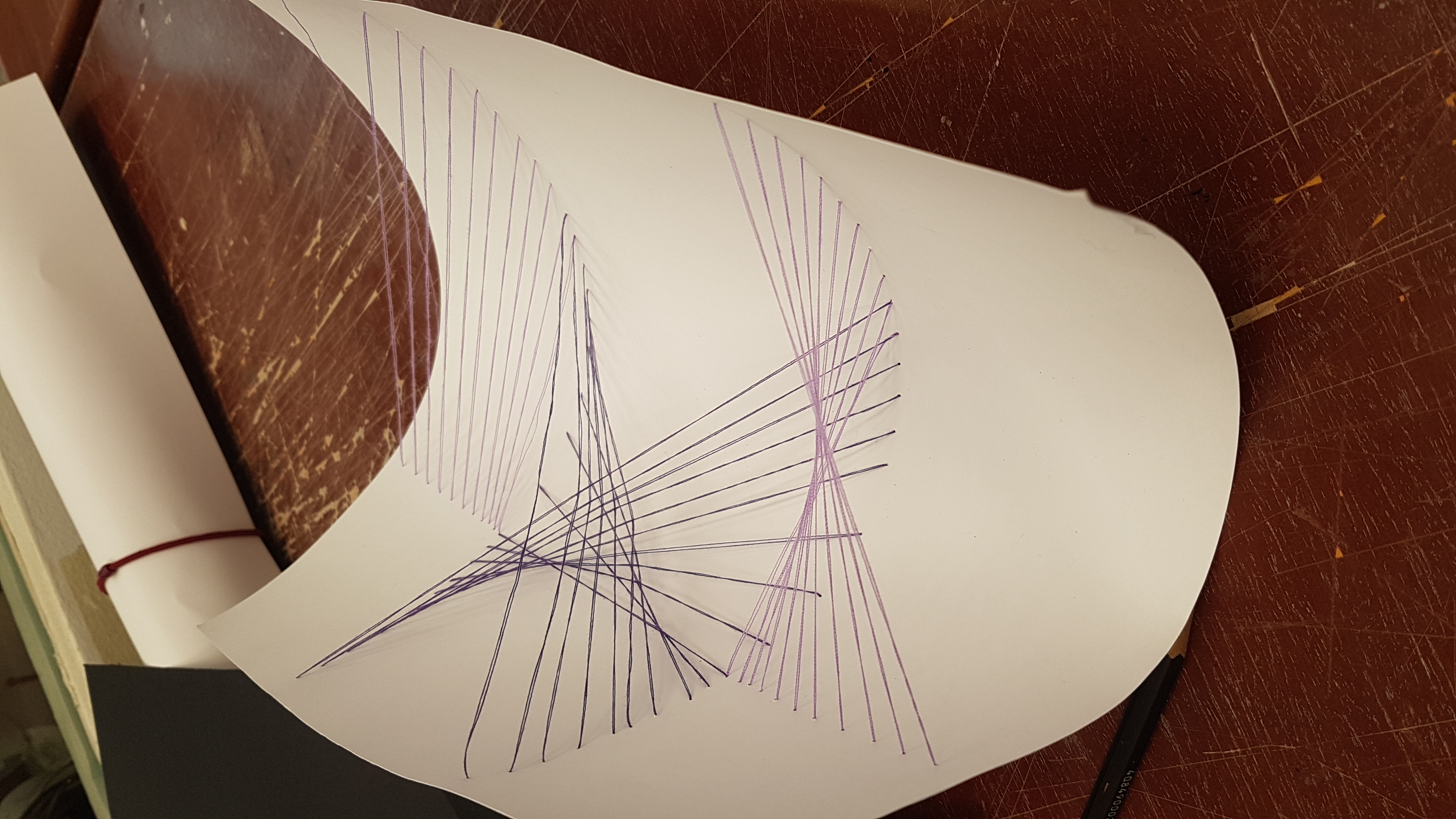 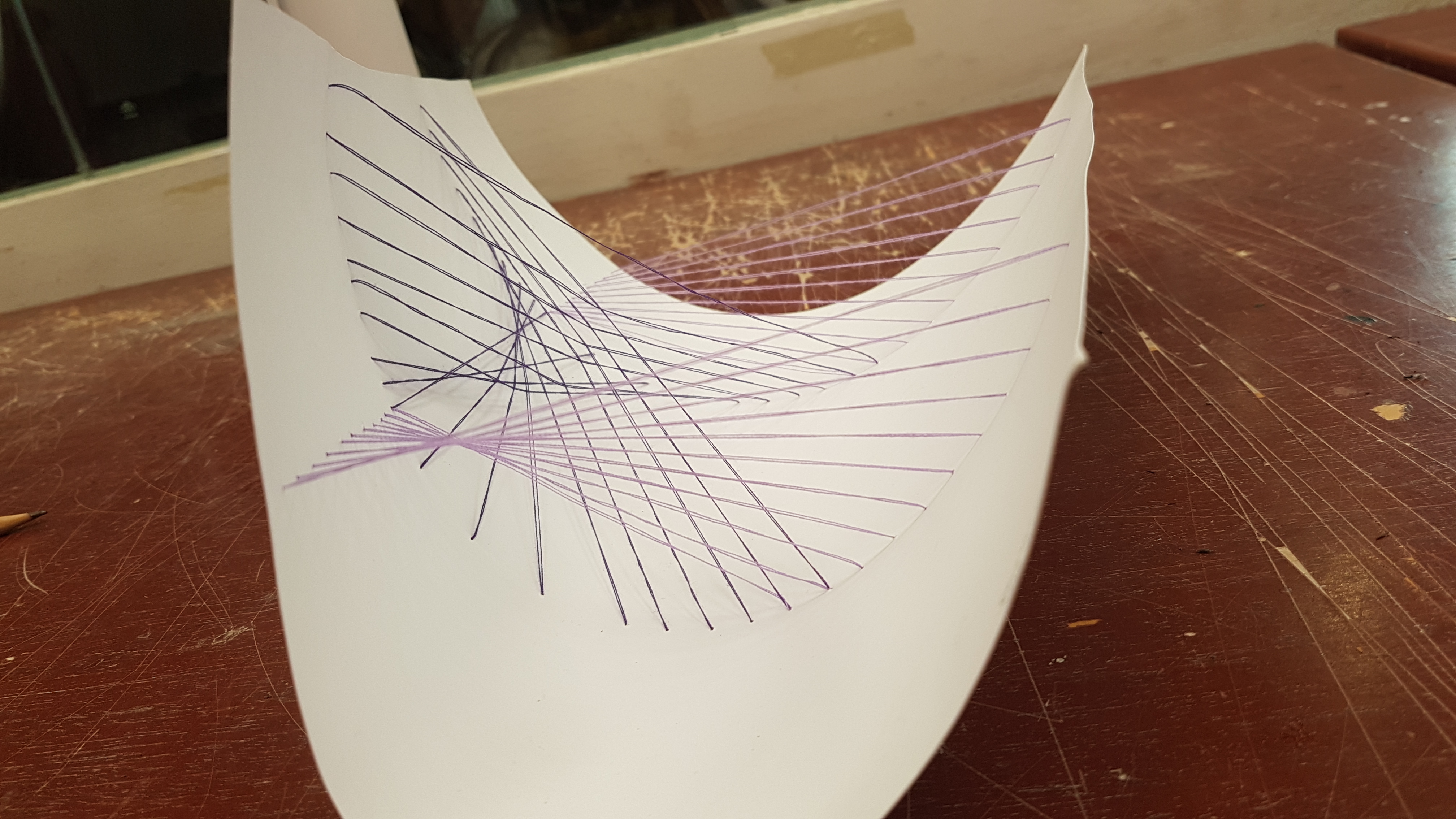 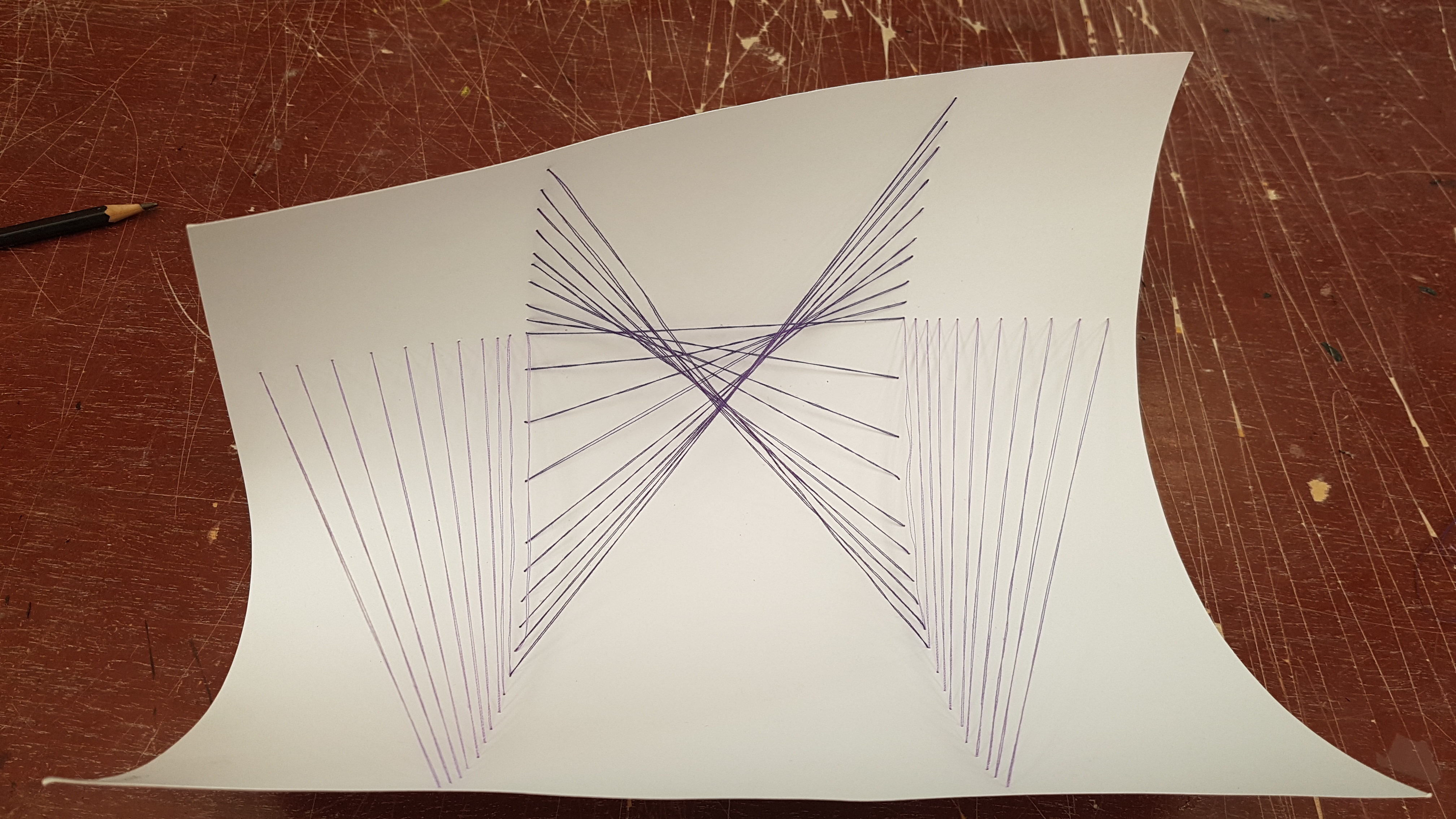 After consulting with Mr. Peter, I made final modifications to my work. 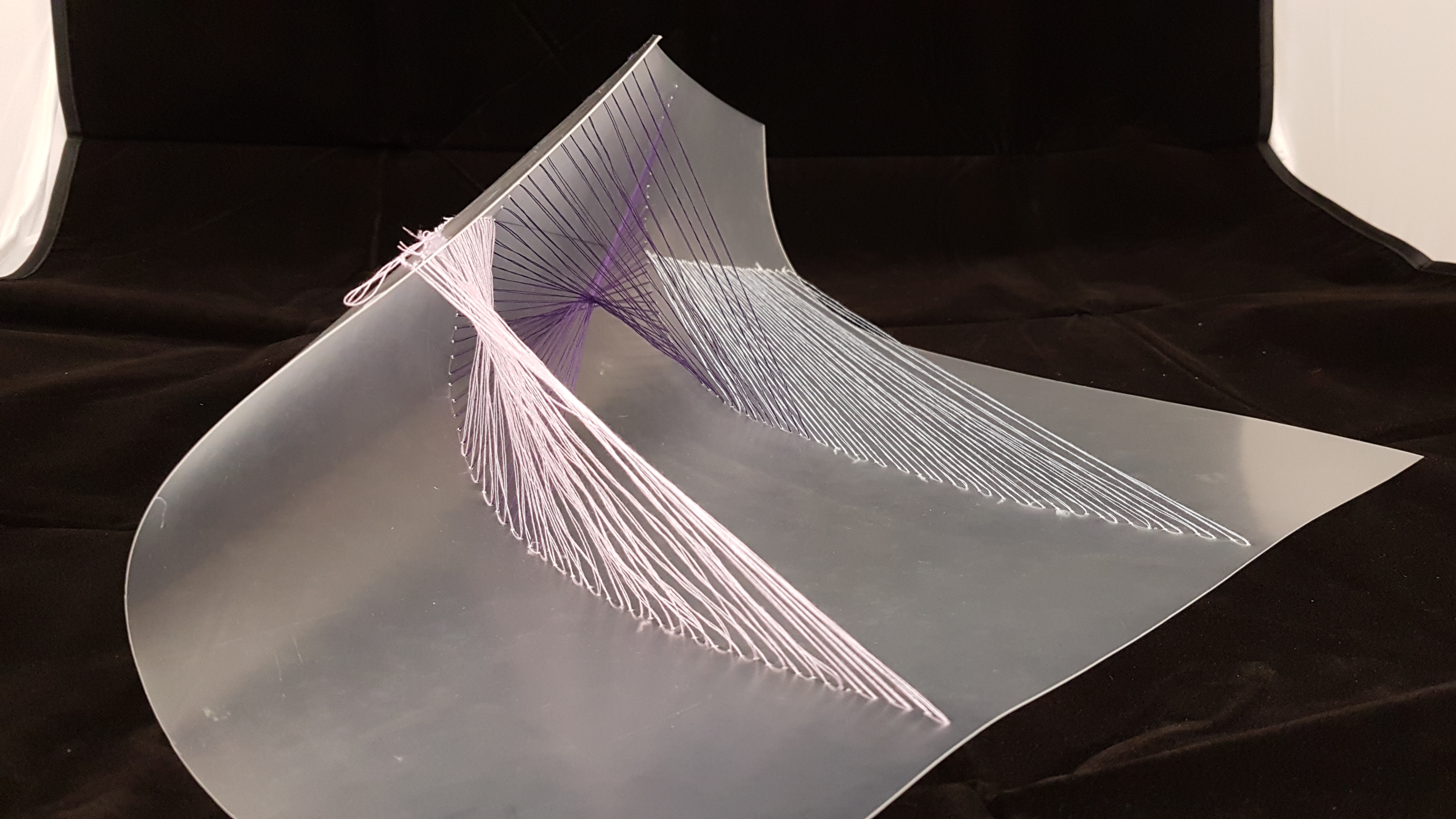 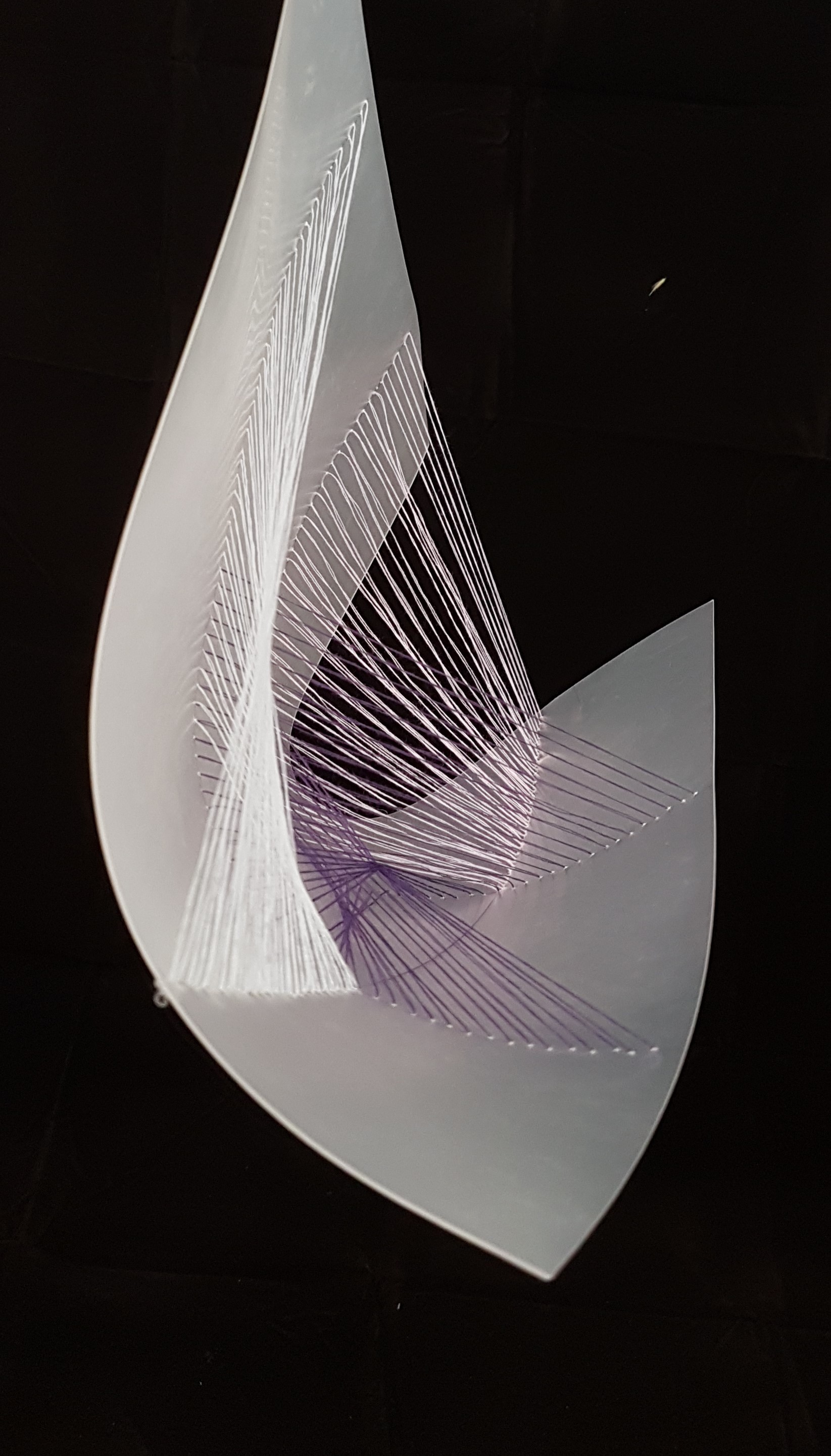 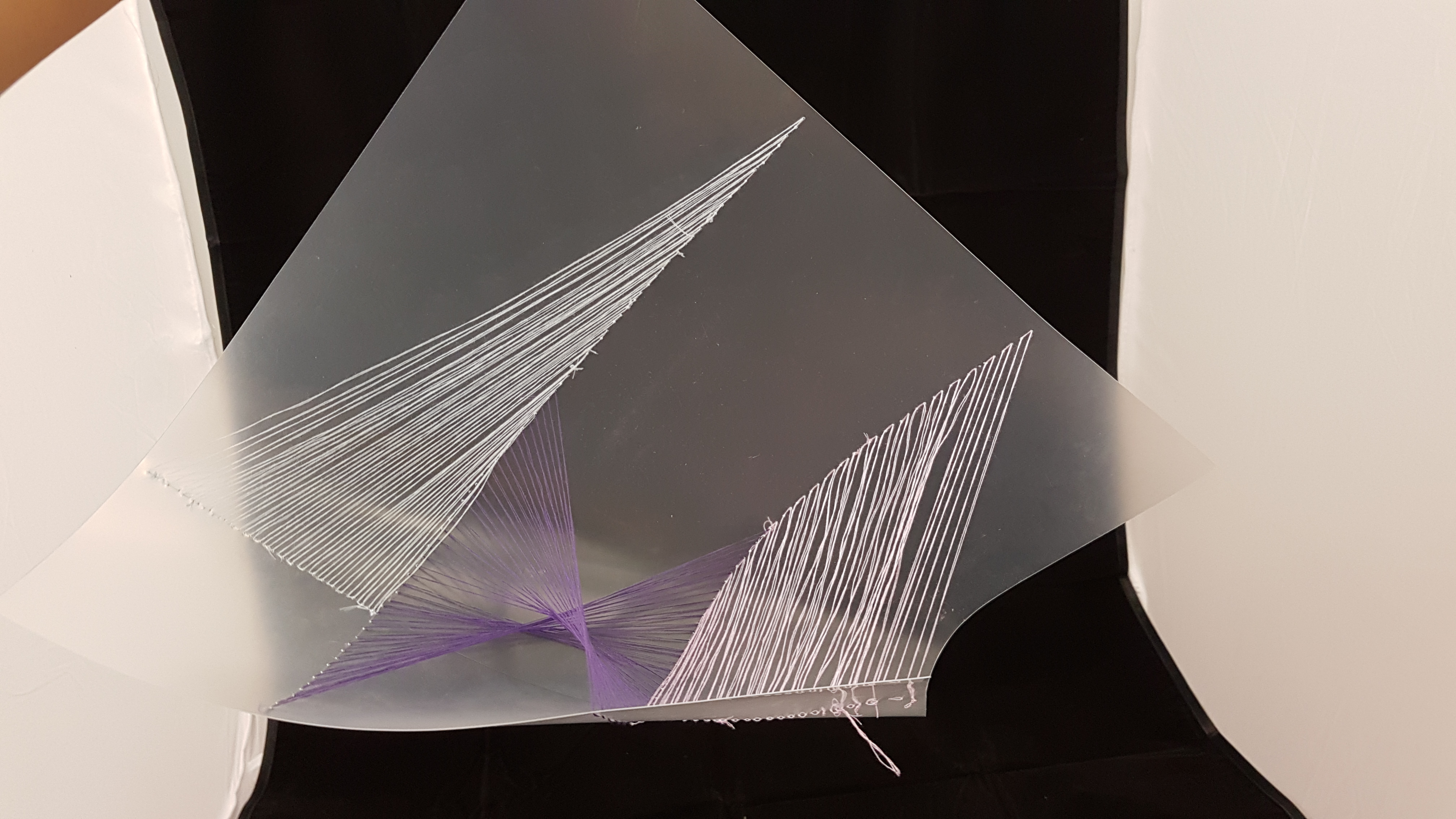 Angle of display where tension of strings are strongest.

Video of Planes in all angle upon rotation: img_0857

(Hopefully the video can be opened >.<)

And the plane on the extreme right (Light Blue plane) is more acute and more parallel to the plastic board to mimic the waves that has lesser energy and swirl.

For the plane in the middle section (Dark Purple), Mr. Peter suggested I lift the strings up by bringing the strings over the top, rather than interlacing them. This lifting effect in the center I realized, creates a sense of 3 Dimensionality space.