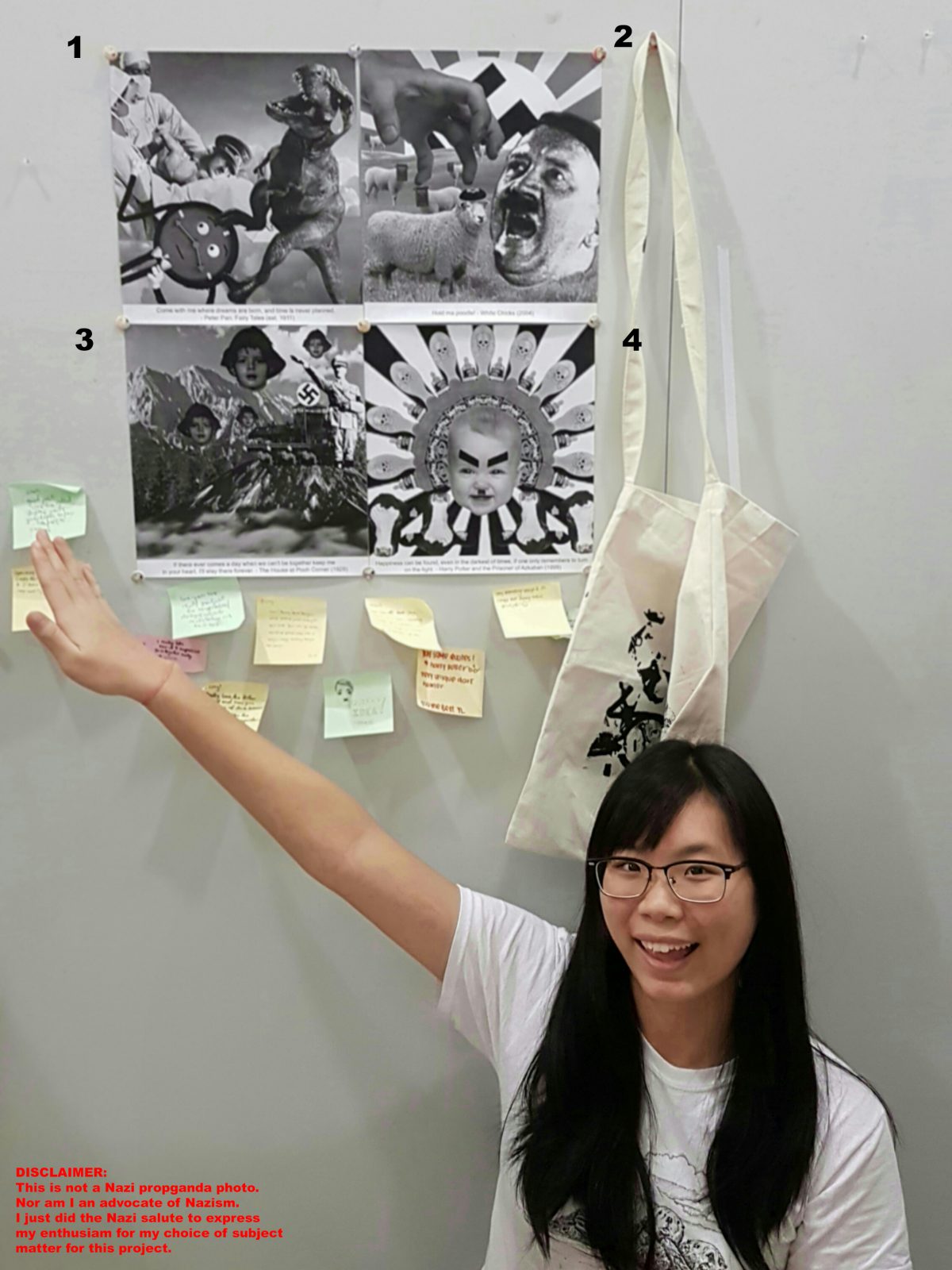 Methodology
My approach to Project 2 was to breakdown the quotes into keywords, and then branch out from the keywords to get inspirations as to what my possible choice of subjects can be used to represent my quotes without being too literal! 🙂
The final words I have decided to use to represent the key words are usually what I belive in or what I prefer to. For instance, I love “babies”. HENCE, “babies” would mean “Happiness” to me.
You can see the thought process in the following attached image of my 2D Sketchbook! ^-^ 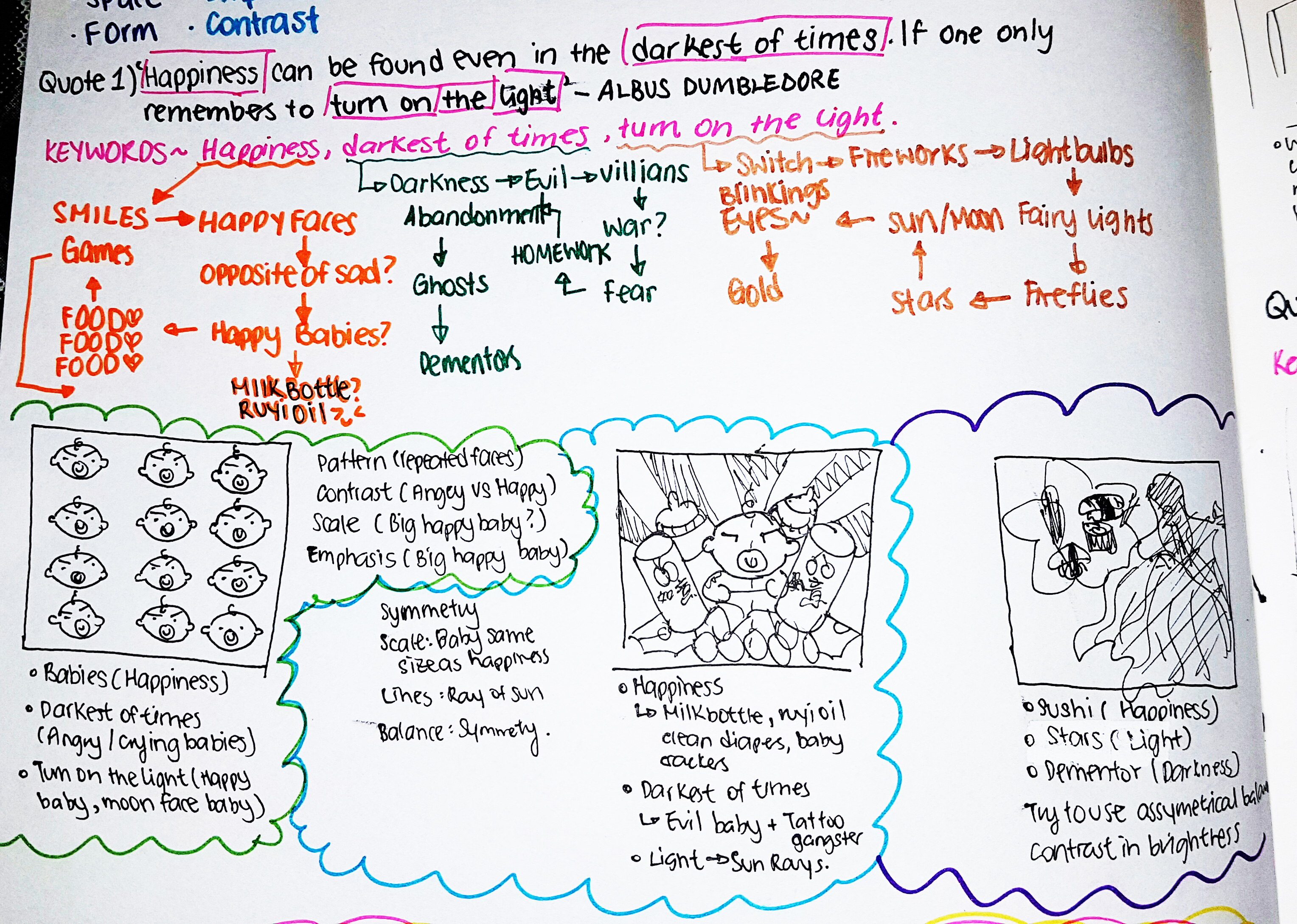 My objective in this assignment
In the following works, my unanimous goal is to make the quotes as non literal as I can by inserting dark humor, playing around with scale and involve the use of Dadaism to make the final pieces as surreal as I can. At the same time reinterpreting the quotes in my own perspective and exploring my choice of subjects.

Quote 1) “Happiness can be found, even in the darkest of times, if one only remembers to turn on the light.” 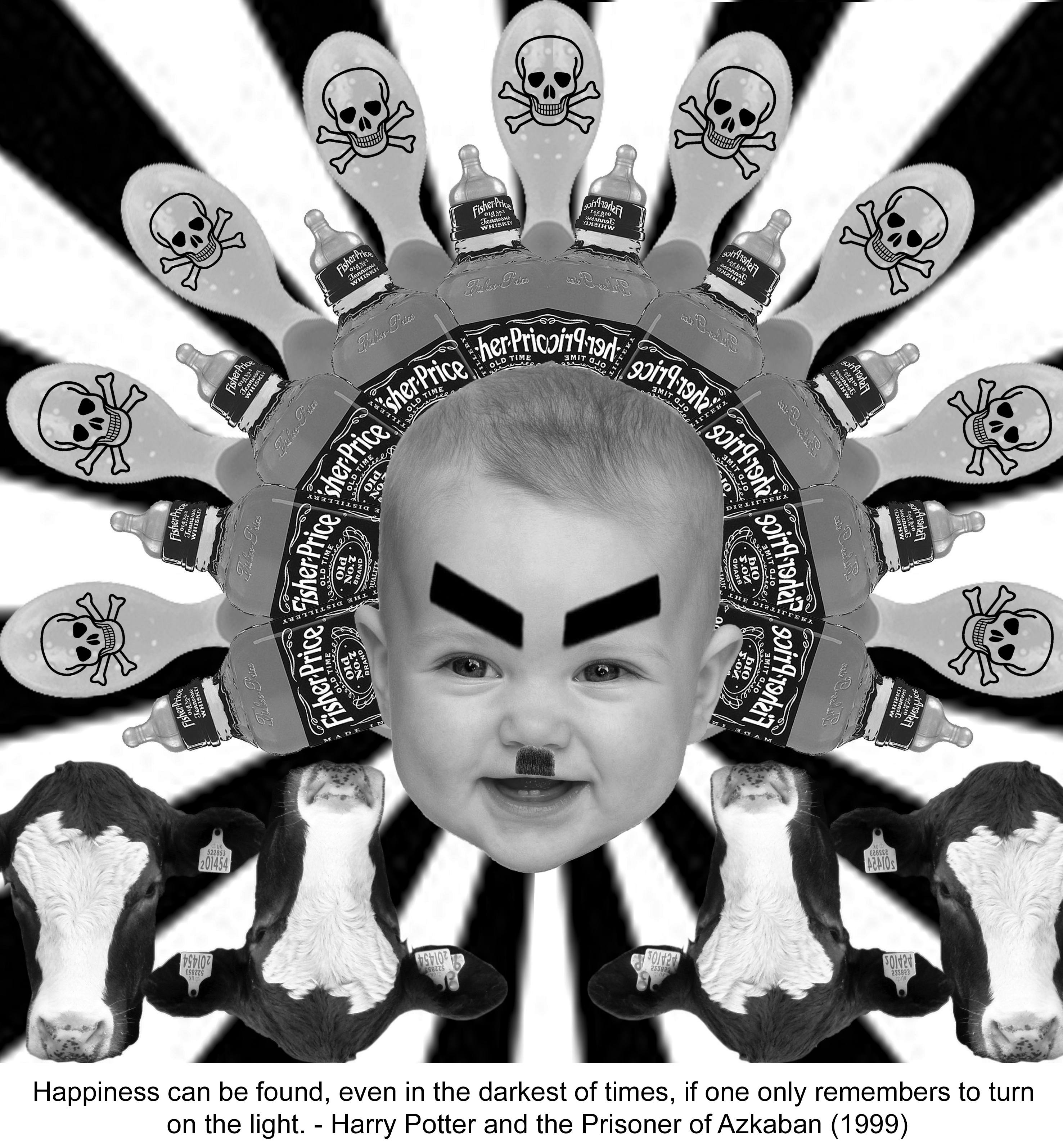 Principles of elements and design: Lines, Repetition and Symmetrical Balance.
LINES from the sun rays in the background creates a radiating effect from the center of the image, to create a form of radial symmetry.
REPETITION of the items (bottles, spoons, cows etc.) in a spread out manner, using the rays of sun as guideline creates a sense of SYMMETRICAL BALANCE as the Baby Hitler acts as the central axis of this symmetry.
My Interpretation: Baby Hitler’s death could have been easily staged earlier to prevent a chaos, by poisoning (hence the poison sign on the spoons) the things baby Hitler would have loved. Such as adding alcohol to his milk, feeding poison to him in his baby food. Hence, Hitler’s death is a form of happiness to his victims.
Quote 2) “If there ever comes a day when we can’t be together keep me in your heart, I’ll stay there forever.”

Can’t be together-> distance and separation 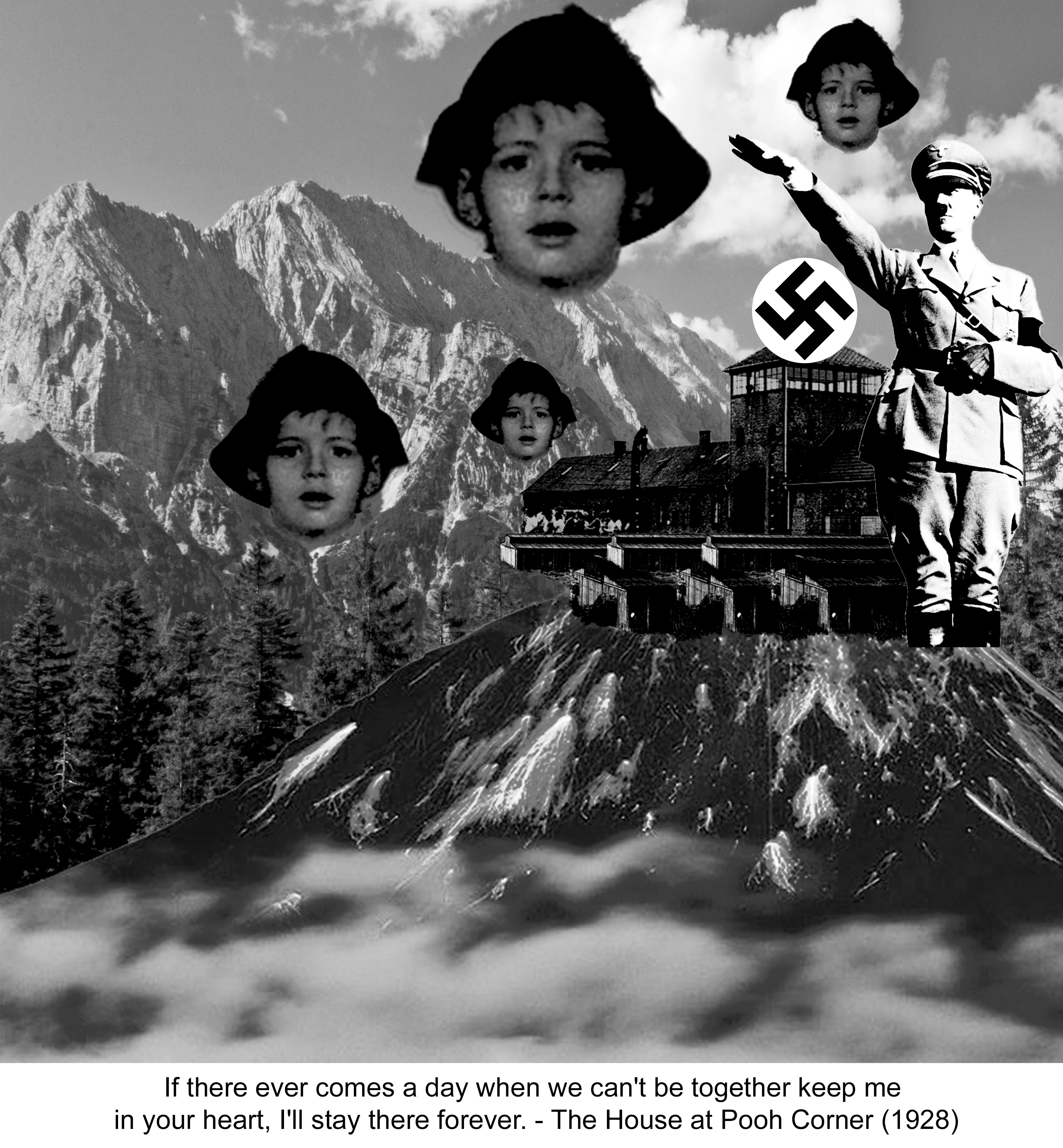 Principles of elements and design: Scale, Repetition and Lines.
REPETITION of Jewish boy’s head in varying SCALE. There is slight use of implied lines created by the direction at which Hitler’s salute is directing our eyes to : Boy’s head.
My interpretation: This quote can be used in the situation where the Jewish mother is going to be executed while her son is being sent off to the concentration camps during the Holocaust. The use of the Jewish boy’s head in the background is to represent that, although he is held captive in the camp, his mind and spirit is elsewhere and not brainwashed by Hitler’s idealogy .
Quote 3) “Hold Ma Poodle!”
Keywords:
Hold->grabbing
Poodle-> fluffy ->Sheeps 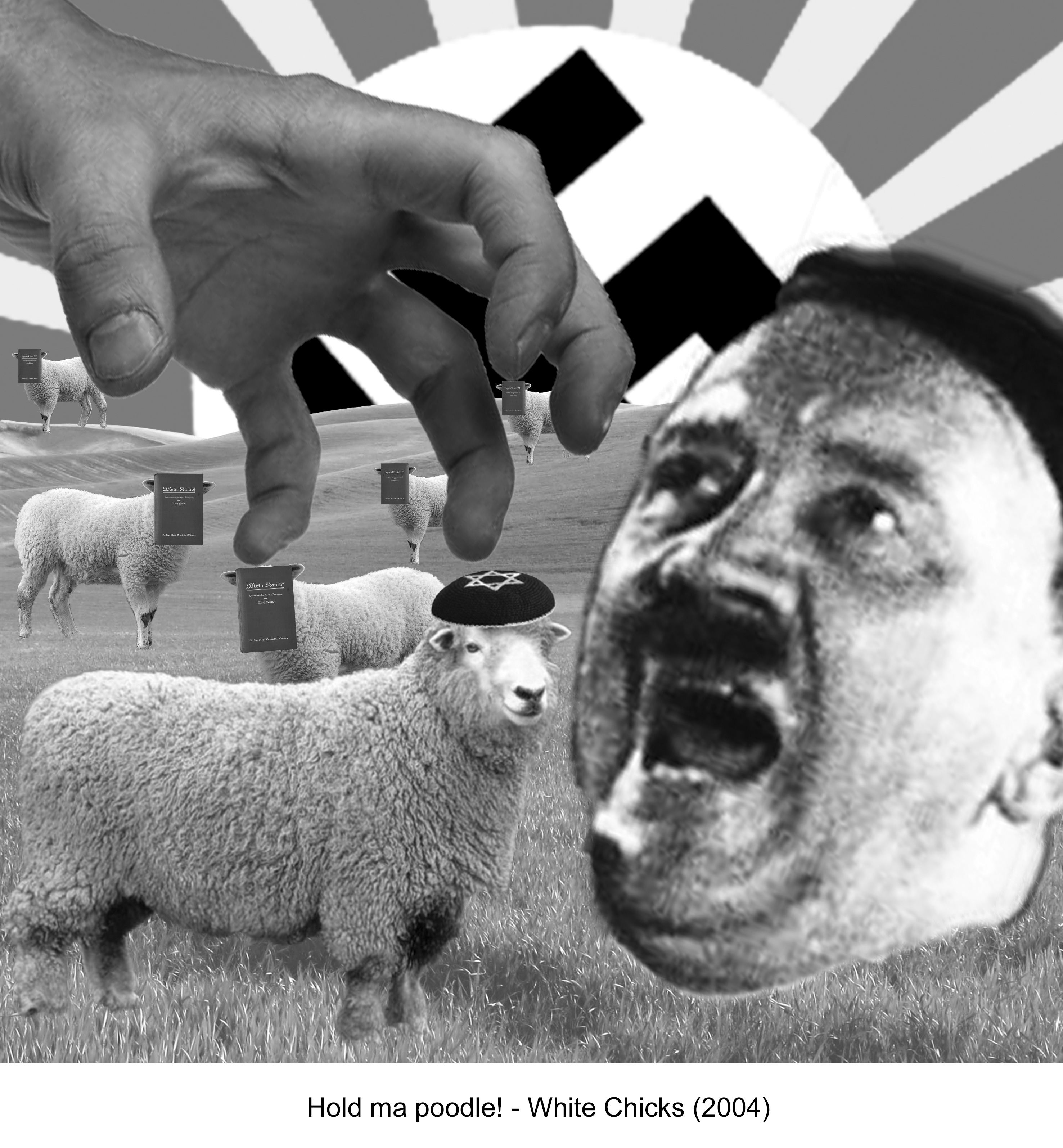 Since this quote had lesser keywords, I got feelings emulated in this quote instead, which is Agression.
Principles of elements and design: Scale, Repetition and Balance.
REPETITION of sheep with Mein Kampf books on their faces. SCALE of hand and Hitler’s face is much larger than the sheep. ASSYMETRICAL BALANCE is attempted as I tried to balance the visual weight of Hitler’s head on the right with the hand and Jewish Sheep on the left.
My interpretation: Mein Kampf is an autobiography by the National Socialist leader Adolf Hitler, in which he outlines his political ideology and future plans for Germany. And I pasted the book all over the sheeps’ face as I wanted to imply that the innocent sheep in the meadow were being brainwashed by Hitler’s ideologies. The sheep in the foreground is the only one without the Mein Kampf book as a face, instead it has a Kippah (Jewish cap), a representation that the innocent sheep is a Jew.
The hand is about to grab the Jewish sheep to be fed into Hitler’s mouth, a metaphor for the sheep that is about to be killed by Hitler, or brainwashed to be like the rest of the sheep. The aggression of the quote is carried out into action in this image.

Quote 4) “Come with me where dreams are born, and time is never planned.” 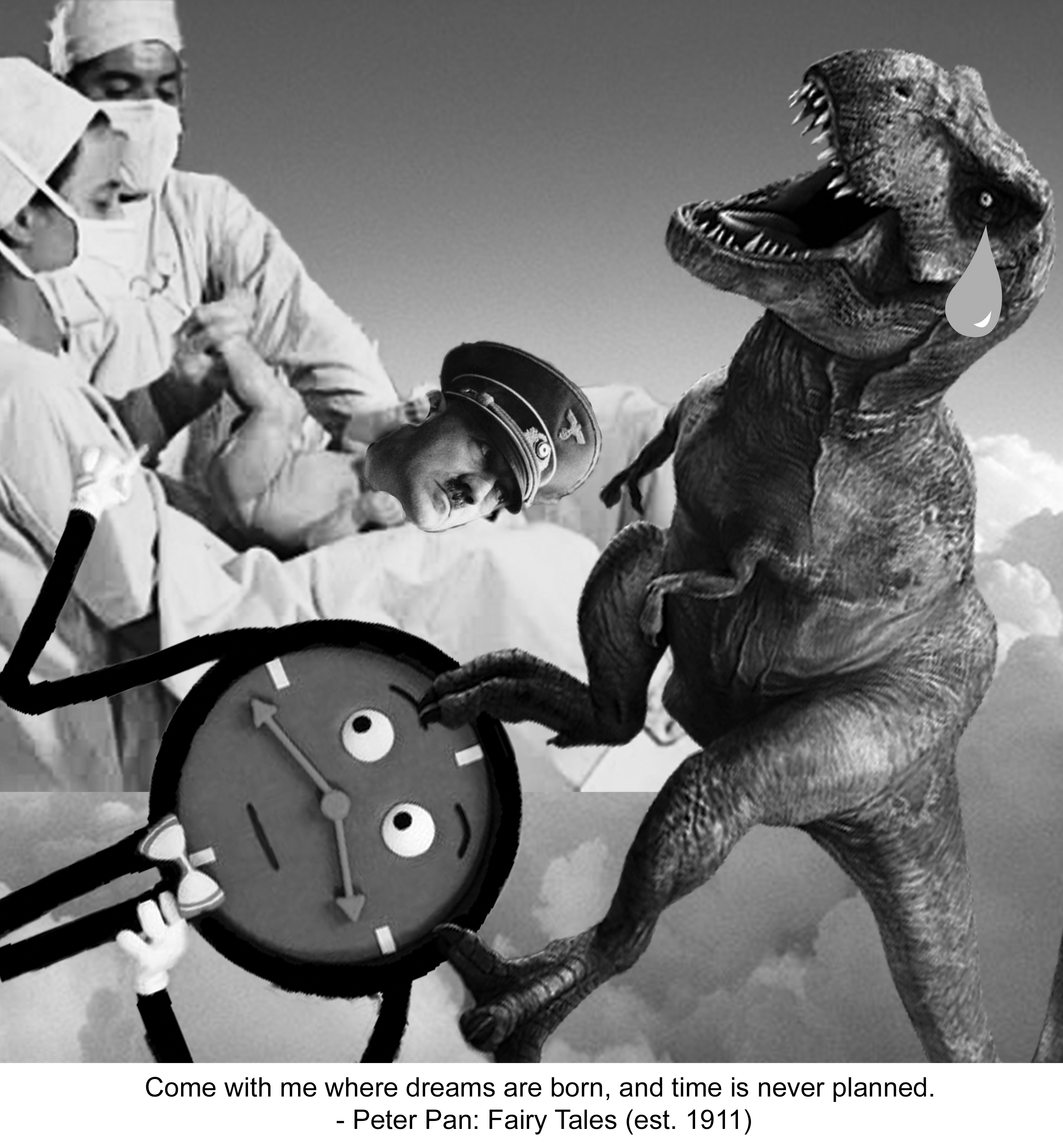 Principles of elements and design: Scale, Repetition and Balance.
SCALE of Doctors against the Dinosaur. ASSYMETRICAL BALANCE is attempted as I tried to balance the visual weight of Dinosaur on the right with the doctors and clock on the left.
My interpretation: The dinosaur ( beginning of time = to imply birth of Hitler was a long time ago)  gave birth to baby Hitler, not knowing that it also gave birth to “Time” unexpectedly. “Time” is the antagonist from the mini web series: Don’t hug me I’m scared, on YouTube. Hence, implying that the birth of Hitler long time ago was the unexpected birth of an antagonist.
After looking at my concepts and final images, I decide to rearrange the sequence of my quotes. After looking through my final pieces, I felt that the images kind of convey a sequential story of the Hitler I portrayed. 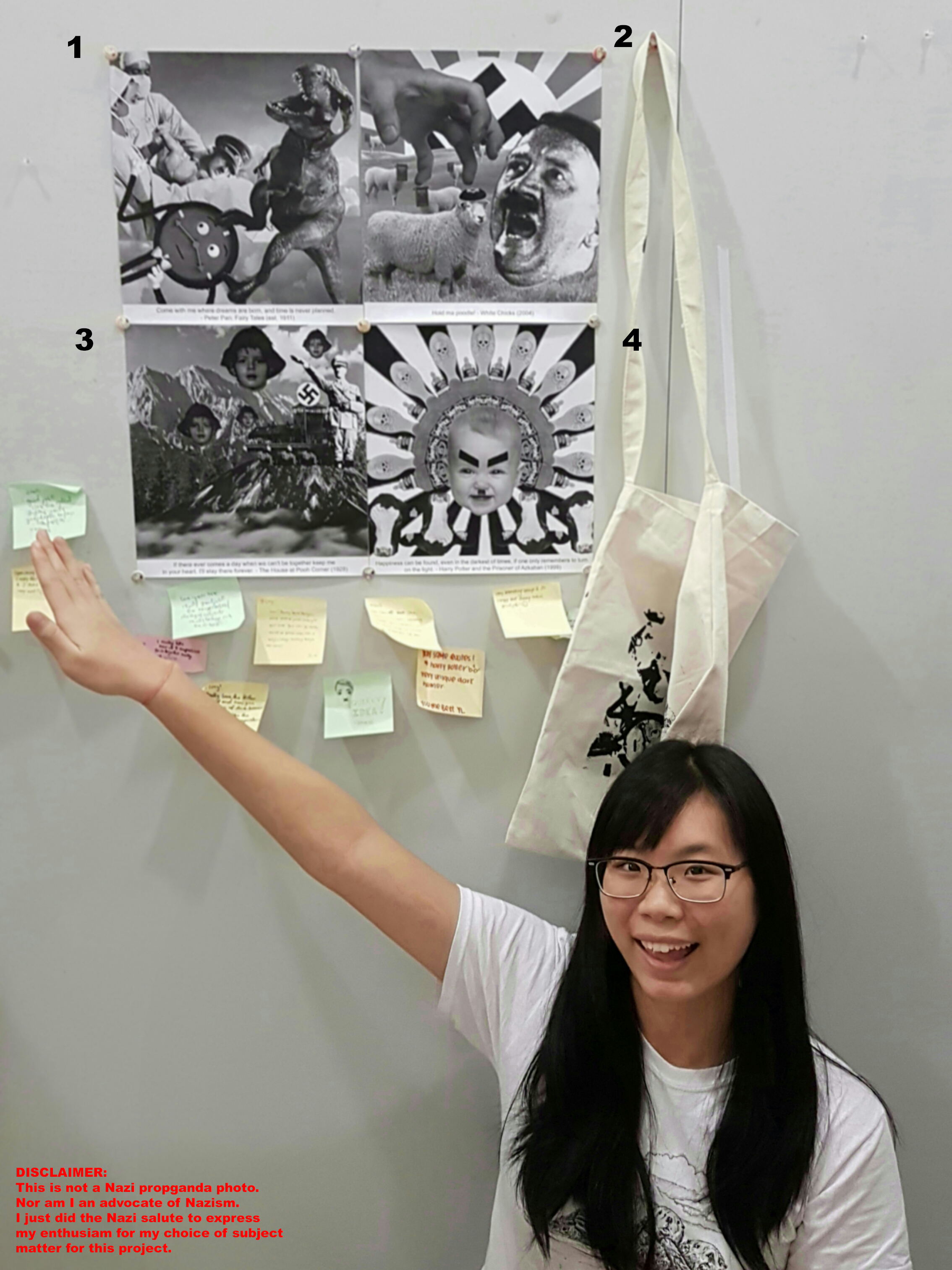 Sequence is as followed.

Birth of Hitler > Rise of Nazism and mass murder/ conversion of Jews> Jews kept in concentration camps > How Hitler’s act of terror could have been prevented by an early death.
My Inspirations 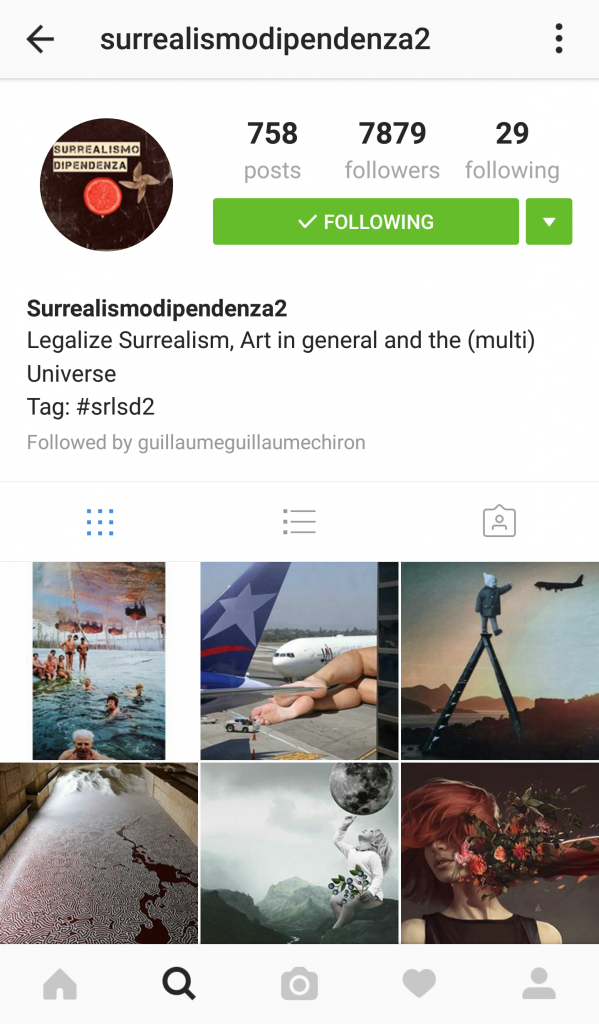 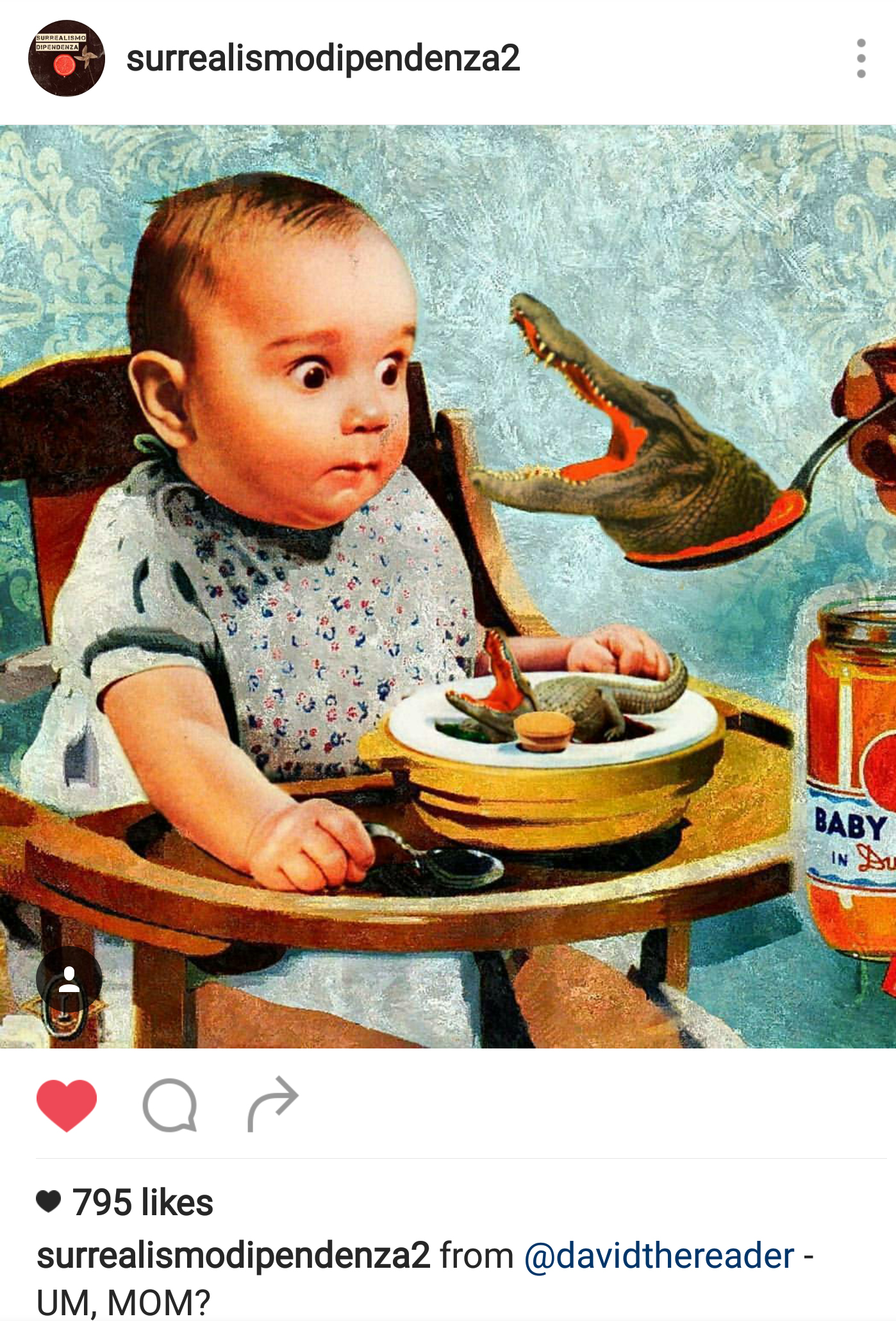 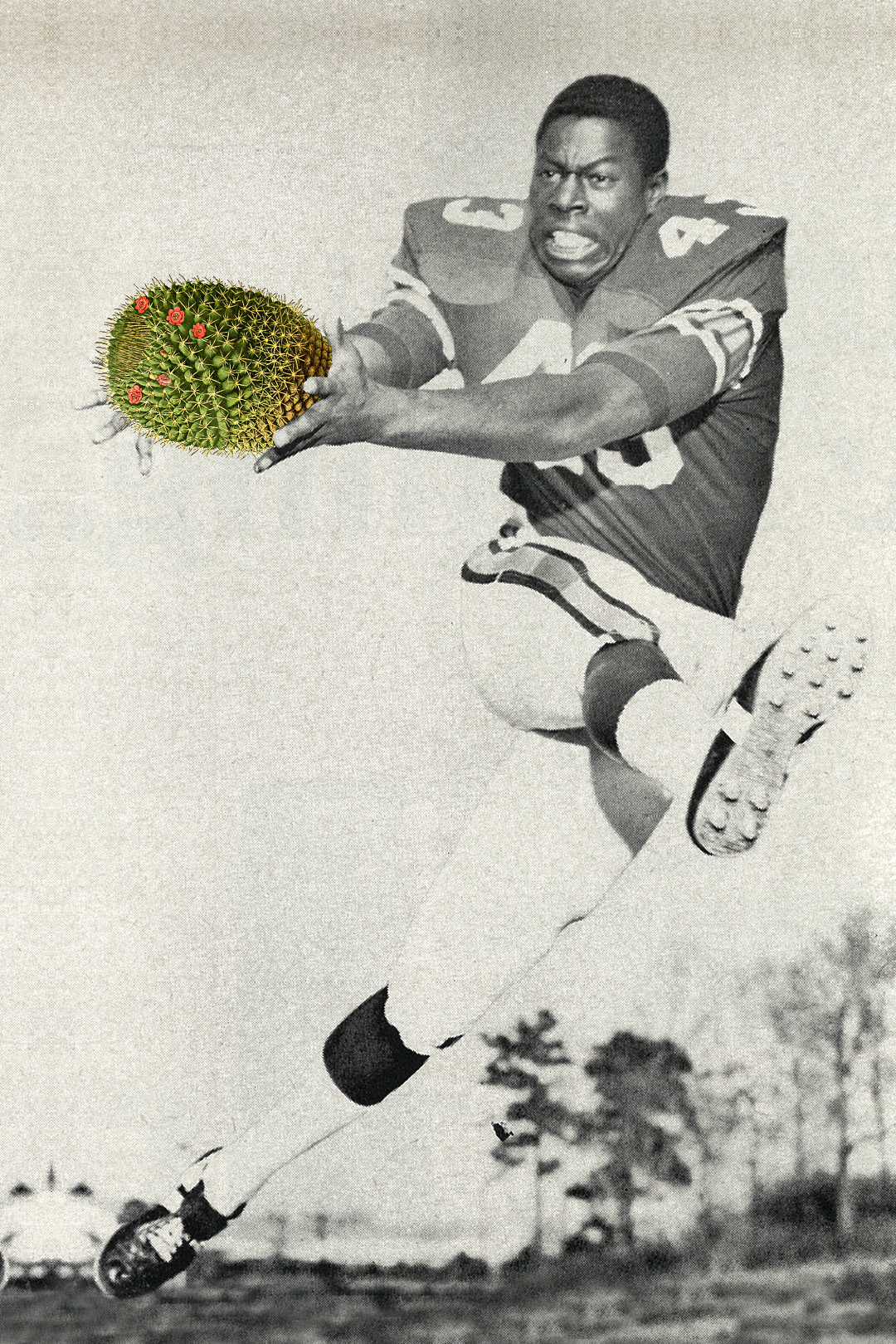 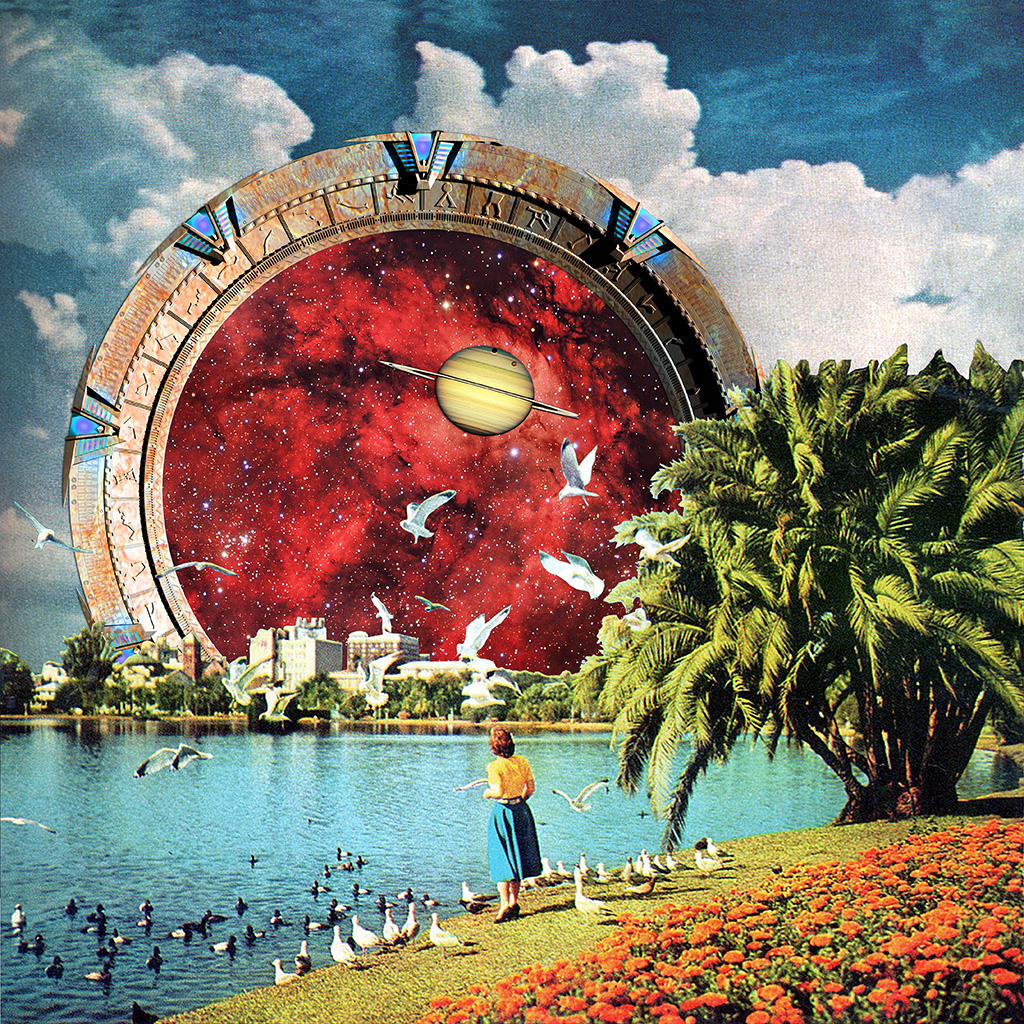 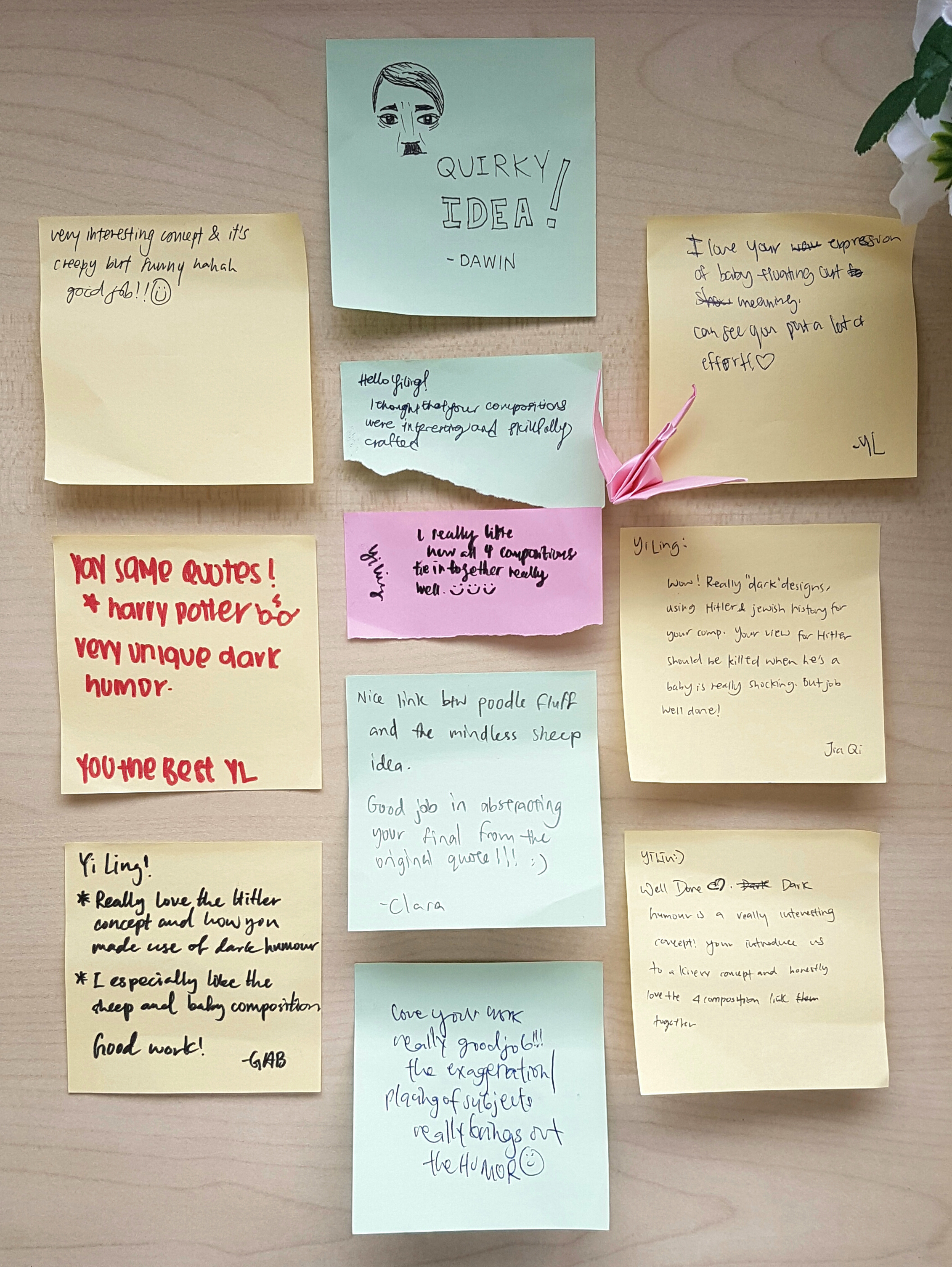 I cant remember 100% of what Ms. Joy said, but the gist of the good things she said about my Project 2 was that she liked how I used the elements and principles of design in my work to direct the viewer’s attention to areas I wanted to focus on, and the use of dark humor with the reoccurring motif of Hitler in my various warm and fuzzy quotes were well played.

Whereas things to improve on is that the 2nd composition was a rather confusing as the visual weight of the hand and Hitler’s head are very similar, hence it was rather confusing if the hand was grabbing Hitler or the Jewish sheep as, Hitler’s facial expression looked scared. Joy also suggested that maybe averting the gaze of Hitler could assist in my composition to make Hitler look less afraid of the hand. 🙂

Regarding my silkscreened tote bag, we both agreed that the silkscreen pay off was not that good and that perhaps in the future I can have more opportunity to silkscreen again, and perhaps exposing my screen for a longer time will result in a better print! 😀

Thank you Ms. Joy and my lovely classmates for your feedback and comments!!

To be honest, my favorite part for presentation day is getting the post-it notes from my classmates, and obtaining feedback. For some unknown reason it makes me feel very excited! ^0^

Nonetheless, I had a really great experience with this project as I managed to use the principals of elements and design to create the design I wanted and then having to print them onto a tote bag! Having my design to be printed onto a product gave me a sense of achievement and a more tangible feeling of being a real designer. 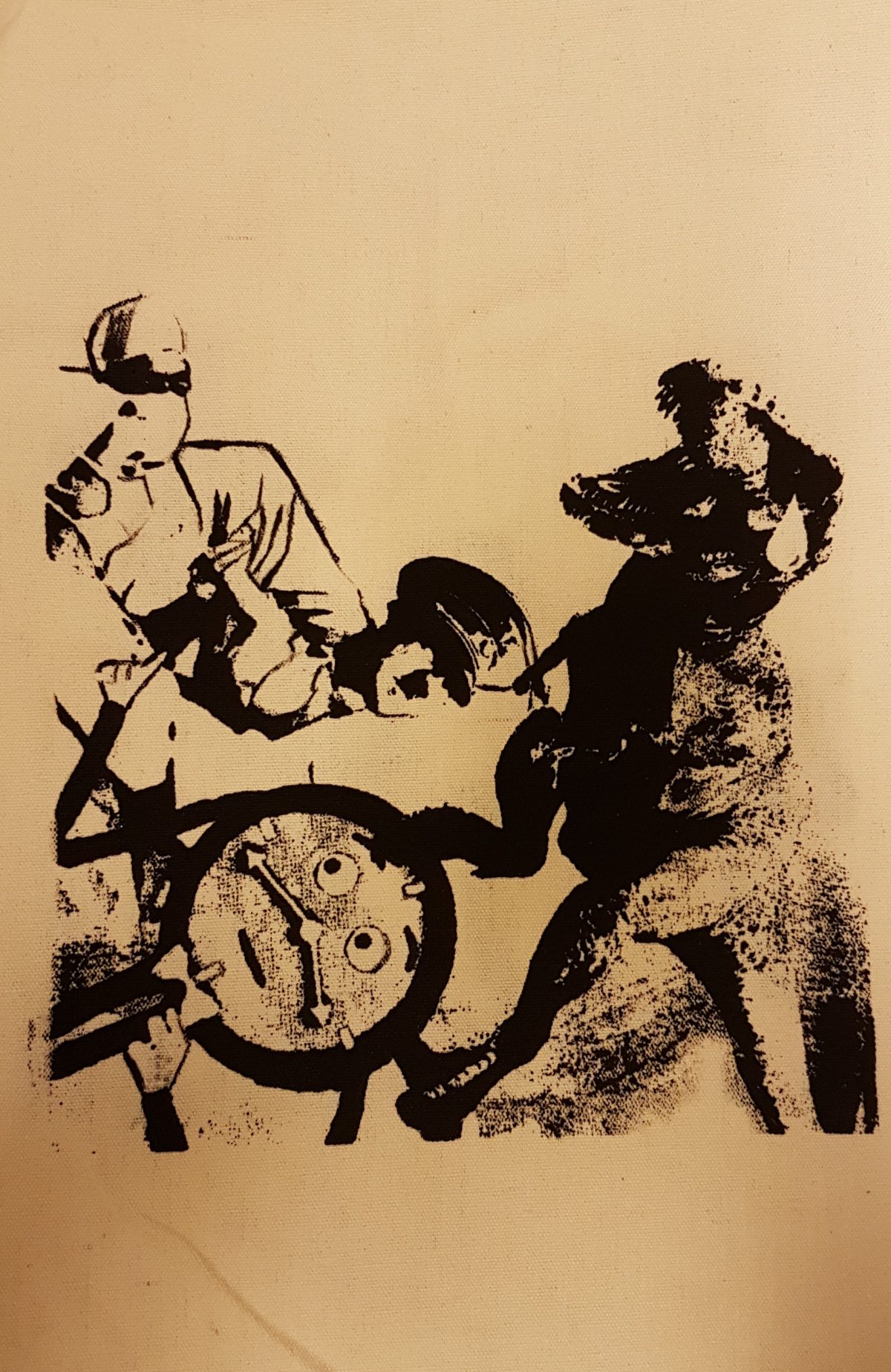 I had to see and have hands-on experience to believe this amazing invention created by mankind!

Firstly we were told to wash our silk screen frames and use a hair dryer to blow dry them, to ensure they were clean!

Then we went into this enclosed red room ( Red light was present) where NO LIGHT was allowed to be present as there might be some chemical reaction with the medium we were going to use. We then coated the netting of our frames on the back and front using the blue paint-like medium and then placing our coated frames in this GIAGANTIC oven (It had really smooth rolling trays…) to dry the medium !

After which we were taught by Xiuming (Work-study senior) to place our transparency and frame into this GIGANTIC MACHINE which looked like a photocopy machine on the outside, but had like reflective metal on the inside which made it look like a tanning machine. After which we locked our designs in the machine, it made a whirring sound and the cloth above our designs was like sucked in!!! I was super amused at this point because I had never seen anything like this before! 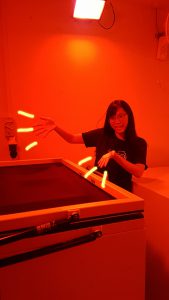 After which the machine did it’s job, we took our designs to the back of the room to wash the residue off using this jet spray (It was fun… pretending that the jet spray was a rifle

)! But in all honesty, I was rather upset at the amount of water wasted in this process of washing… considering that all of the students in ADM Year 1 had to do this, it is bad for the environment by wasting so much water. :'( 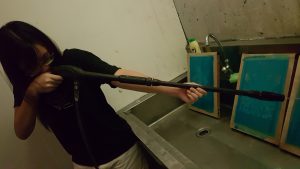 This jet spray allows the residue to be forced out of the net!

After cleaning up our designs on the frames, we used the hairdryer to dry the frame and apply a layer of thick ink over the top of our frame and pushed the ink across the designs using a wiper tool to ‘print’ our designs onto our tote bag! 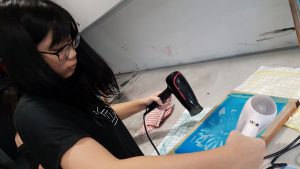 I wasn’t very please with the eventual outcome on the tote bag as some areas were too dark and splotchy instead of greyish, and details were missed out… As you can see it is pretty in-identical to my digital design. 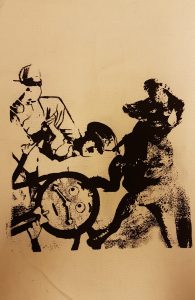 After test runs on paper, the final design has been printed on my tote bag! 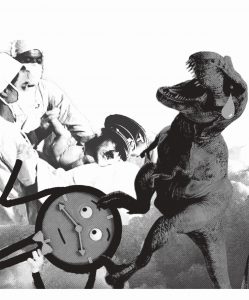 What I regretted the most after the final printing onto my tote bag was not being able to have a good gauge of what my final print will look like based on the tonal contrast, quality of the digital image and frequency of the dots in bitmap, BEFORE printing on the transparency paper … I hope that in the future I can have more opportunity to try out silk screening again. It was really fun! But at the same time, the process of silk screening was not easy at all; and I really do commend those who could do it so well!