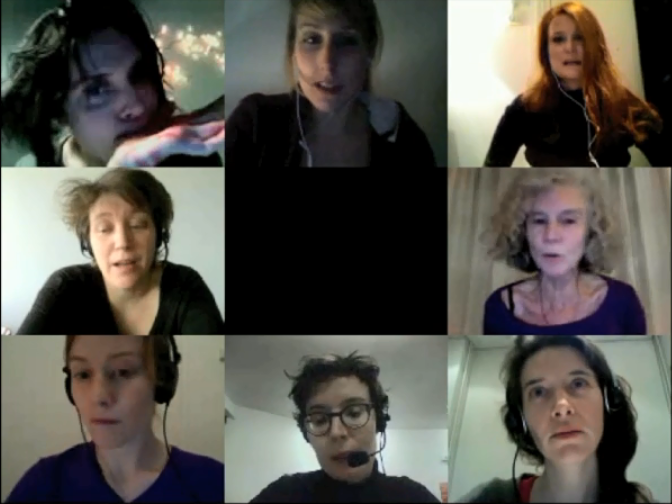 There is a total of 5 videos in the series Angry Woman made by Annie Abraham. In the first two videos 24 women of different nationalities would express their anger on camera at home, in their own language. The next two videos feature the women expressing their anger on camera in a single language, number 3 in French and 4 in English, but this time for only 12 minutes. the last one the 5 was a sequence of women screaming into the computer.

Social Broadcasting can be defined as

The broadcasting of video, text and pictures directly to an intended audience through social media channels such as facebook, Youtube, Instagram and other channels as opposed to traditional channels such as radio, TV and print.

So why would this be considered a good medium for art? 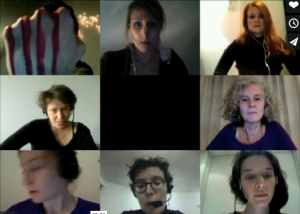 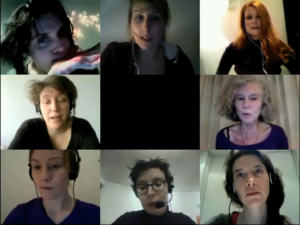 (Screenshot from the third video of Annie Abraham’s ‘Angry Woman’)

First and foremost, it is unpredictable. In the third video there is the silent woman at the top left corner that illustrates her anger through actions and not words. She creates this visual contrast with the others, whilst their tone rises and falls with the passion of their anger, she remains quiet showing hand gestures like shooting the screen and biting her hands, to show the actions that we so deeply want to take when we want to vent. 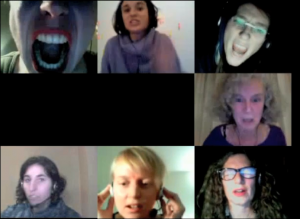 This also leads to the idea of contrast, with various women speaking and a single person only creating gestures it forms a vivid difference in that single video screen which draws attention to it. Subsequently, in the fourth video, where everyone was speaking in English, there was a single person who was screaming, or making incoherent bemoaning sounds. this hence creates a different sound effect to latch onto amongst the waves of others talking. 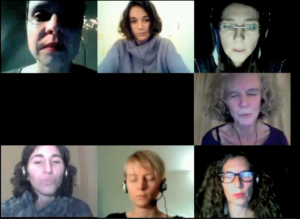 It is also about negotiation, where in a broadcast, one would like to synchronise their actions. In the 4 video, after about 7 minutes, all seven women on screen started taking calming breaths almost as if all of them decide to cool down together. Abit like what we did for one of our micro-projects.

When the performers’ Webcams were succumbing to technical issues, she transformed this problem by directing the group to intentionally turn their cameras on and off, creating a shifting, evolving, changing collage of images in direct play with altered configurations of the online interface.

Whilst this idea of negotiating and cooperating is apparent in certain ways of her work, the idea of negotiation can play a key role in making the social broadcasting fun (and covering up glaring flaws to the system).

But why is this done on social media and not the television. In a way social media is like a platform for a two way connection, where the tv and advertisment is a single connection (radio in some cases you can call in, but its still mostly one way). Anyone with a social media has the ability to take part in these works of art, in a way it gives like minded individuals, in this case ‘angry women’, the ability to join in the work and contribute it.

In a society where authenticity and privacy become endangered it is important to find ways to access our vulnerabilities and doubts, to make them public, to cherish our messy side. We need to make space for the beast in the beauty, to go back to reality, to claim the human.

Social broadcasting becomes a way for people to share issues that they feel strongly for, and be empathised with by a like-minded crowd. In a way, it creates a safe community for all to share and be vulnerable without fear of being judged.

One Reply to “Internet rage”